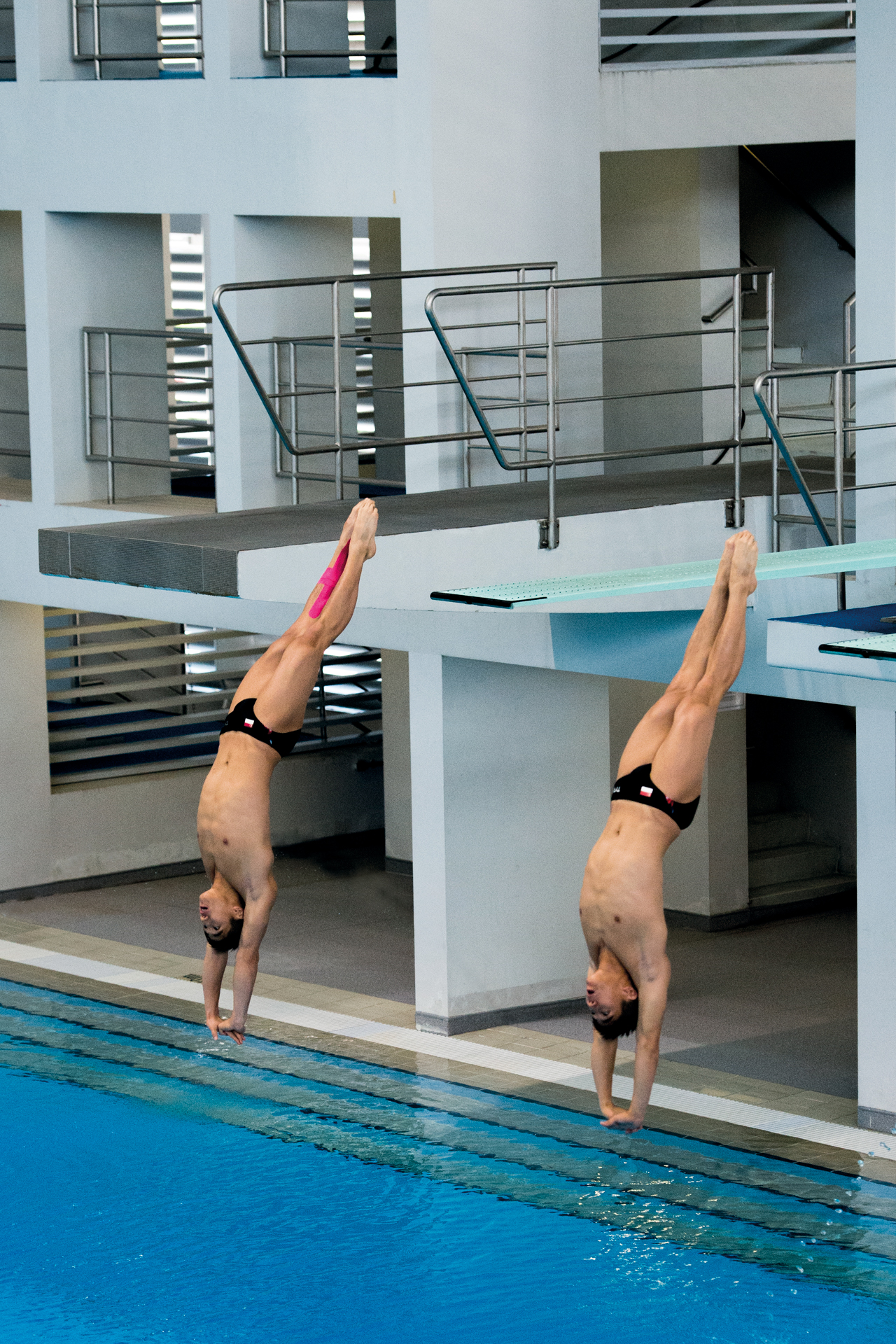 Standing between the 176cm-tall national synchro diving partners 3SG (NS) Timothy and 3SG (NS) Mark is like being trapped between infinity mirrors for this 158cm writer.

Luckily, the 23-year-old twins share the same hearty laughter and warm, affable nature. But that's where the similarities end.

3SG (NS) Timothy, older by two minutes, is a self-professed "serious over-thinker" who speaks fast and to-the-point. 3SG (NS) Mark, on the other hand, is more laidback and has a slight drawl.

This chalk-and-cheese pairing means that 3SG (NS) Mark's lame jokes are often met with Big Brother's side-eyes. But the twins insist that this makes them better athletes.

3SG (NS) Mark explained: "We complement each other - when he overthinks, I'm able to help him calm down. And when I take things too lightly, he can bring me up a step."

Today, they can't imagine standing on the springboard with anyone else.

Finding their own way

This perfect pairing won the "Diving Twins" SEA Games silvers in the synchronised three-metre springboard event in 2013 and 2015. Pretty impressive for the former gymnasts, who only began training as synchro diving partners in 2011.

But it's a pairing that "would have seemed ridiculous to 10-year-old Tim and Mark", 3SG (NS) Mark said.

"Growing up we wanted to create our own identity, so we didn't like being around each other," he admitted candidly.

The youngest of four children, the twins credit their mother for encouraging them to grow into their own. 3SG (NS) Timothy recounted: "She requested us to be in different classes, because she didn't want us to be compared to each other."

Thanks to her, the Nanyang Primary School and St Joseph's Institution alumni have forged very different paths for themselves outside of diving.

3SG (NS) Timothy, an Aeronautical Engineer from Singapore Polytechnic, will pursue Mechanical Engineering at the National University of Singapore. 3SG (NS) Mark has a diploma in Sports and Exercise Sciences from Republic Polytechnic and will be reading Business Management at the Singapore Management University.

They've also learnt to take comparisons in their stride. 3SG (NS) Timothy explained: "We focus on ourselves and do the best we can... That's also our mindset when we enter competitions. We just focus on our dive, because that's the only thing you can control."

This mindset was also what took them through National Service (NS). "When Mark and I enlisted, we knew we wanted to give our best," said 3SG (NS) Timothy. "We didn't want to look back and say, 'aiyah, we chao keng (skive), anyhow do NS lah '."

3SG (NS) Timothy became a Transport Supervisor in the 3rd Singapore Armed Forces Transport Battalion, taking on the role of a platoon sergeant.

As a specialist, he understood the importance of knowing his subject matter well: "My men were always asking me why things are the way they are. It was important to be proficient so that I could explain things to them."

He added: "As a diver, it also means understanding what my coach wants and why, so that I can execute the dives better."

3SG (NS) Mark was posted to 208 Squadron where he served as an Air Operations Specialist. Being a tower information coordinator meant paying careful attention to detail.

"I had to be meticulous in my work and ensure zero errors Now, when I'm diving, I pick up a lot more details than I used to."

"We complement each other – when he overthinks, I help him calm down. And when I take things too lightly, he brings me up a step." Both brothers completed their NS in July, just in time for the SEA Games in Kuala Lumpur. By the time you read this, they will be training hard to beat their toughest competitor - homeboys Malaysia.

"Minimally, we would like to hold on to that silver," 3SG (NS) Mark said modestly. "Malaysia is a very strong competitor, but we've beaten them in other competitions before."

And with their birthdays falling on the first day of the Games (19 Aug), hopefully they'll get just the present they're wishing for.