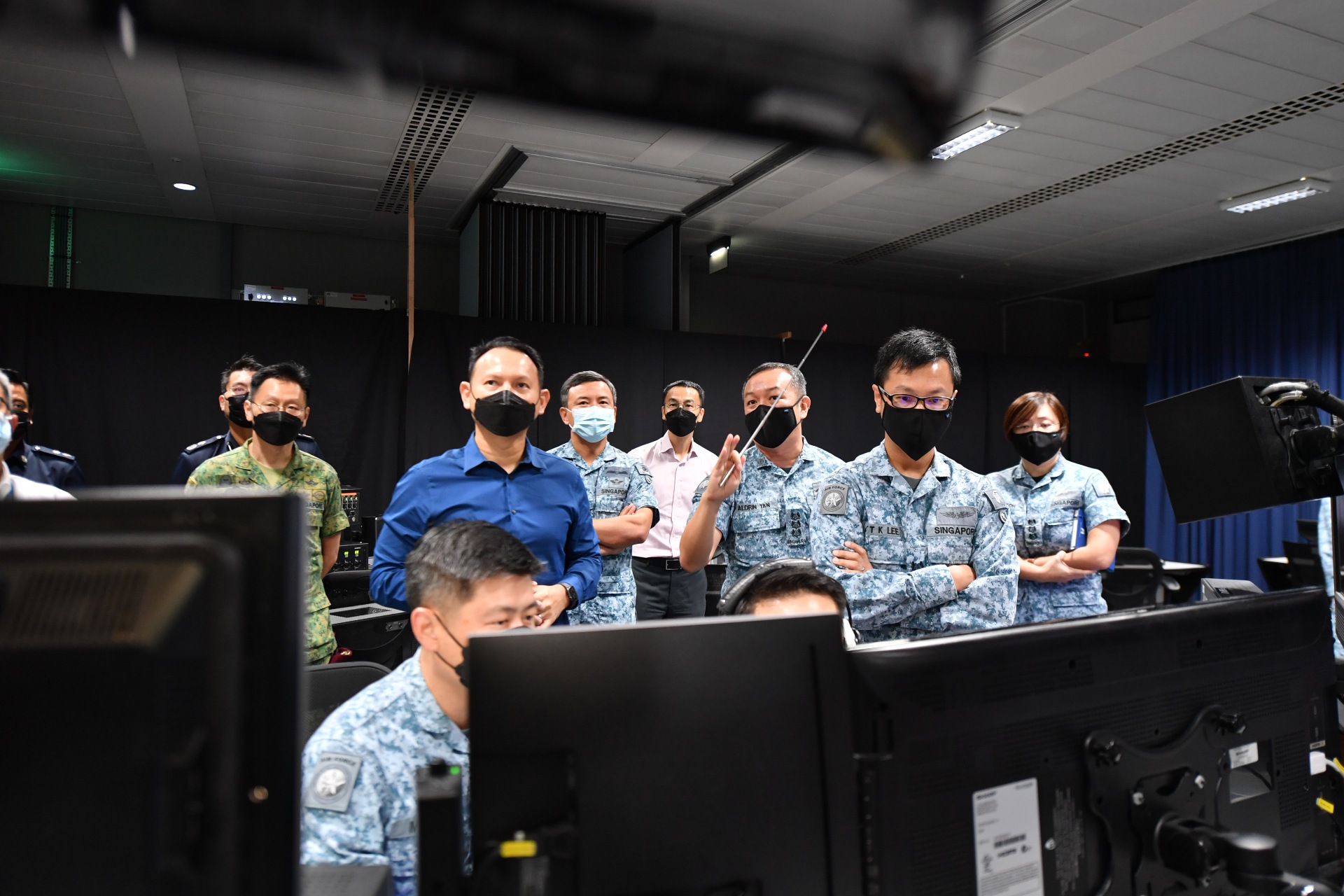 The Civil Aviation Authority of Singapore (CAAS) receives an anonymous email tip-off of a possible bomb threat on board a civil airliner inbound to Singapore.

It then alerts the Republic of Singapore Air Force's (RSAF) Air Defence Task Group (ADTF), which swiftly evaluates the situation and comes up with a response plan using artificial intelligence and data analytics tools.

Within minutes, a pair of F-16C/D fighter aircraft are scrambled to intercept the aircraft, which is suspected to have been hijacked.

As the aerial response unfolds, the RSAF's Ground-based Air Defence (GBAD) systems and sensors such as the Aster 30 Missile System and RBS 70 are placed on high alert.

The Singapore Police Force (SPF) and Changi Airport Group are also activated to provide ground support. In the end, the aircraft was successfully escorted to land at Changi Airport.

This was the scenario that played out at Exercise Vigilant Shield this year.

On average, the ADTF deals with more than 350 suspicious air threats each year. It is part of the Singapore Armed Forces' High Readiness Core that protects Singapore against a wide spectrum of air threats 24/7.

He lauded the close cooperation and integration between the RSAF and various agencies in dealing with suspicious air activities.

"I am quite heartened to see how various agencies as a Whole-of-Government have integrated their operations and are able to handle such threats," he said.

Asked how global developments like the war in Ukraine have underscored the importance of such exercises, Mr Zaqy said Singapore's lack of strategic depth means that robust intelligence and being able to mount a fast response to threats are all the more important.

"Singapore is in a unique situation. We do not have (a) large land mass or much depth, (so) you (have) got to quickly decide as a plane enters our borders – how quick and what your response would be?"

He added: "We will continue to build capabilities, because you always see new things evolving on the horizon.

"That is why it is all the more important that the RSAF continues to build up these competencies and capabilities to ensure that we are able to deal with these threats ahead of time, as fast as possible."

Colonel (COL) Koh Ee Wen, Commander ADTF, noted that Exercise Vigilant Shield had allowed the ADTF and its partners to exercise their air defence responses in a realistic setting.

"Being able to fly and train locally is essential to maintain the RSAF's operational readiness even amidst COVID-19. We must not take the peace and security of Singapore for granted," she said.

In 2019, MAJ Ang was activated to intercept SQ423 after receiving a bomb threat alert.

Fighter pilot Major (MAJ) Jireh Ang said the exercise had not only allowed the pilots to hone their competencies, but also manage their anxieties in the event of an actual situation.

He can personally attest to that. In 2019, he was one of the two F-16 pilots activated to intercept a Singapore Airlines Flight 423 (SQ 423) inbound from Mumbai to Singapore after receiving a bomb threat.

This took place just a few weeks after he had completed the 2019 edition of Exercise Vigilant Shield.

"We are still human. Being able to manage the anxiety, and knowing the training we have gone through…really gave me the confidence to conduct the mission successfully," said the 36-year-old.

The pair of F-16 C/Ds successfully escorted SQ423 to land safely at Changi Airport. The bomb threat turned out to be a hoax.

CPT Janarthan (right) managing the airspace during the exercise.

For CPT S Janarthan, this was his first time taking part in the exercise.

As an Air Warfare Officer (Air Traffic Control), his role was to work closely and coordinate with the CAAS to clear the surrounding airspace swiftly, and keep away other civilian air traffic.

"Coordination time was tight for airspace deconfliction, and subsequently for the aircraft to land," he said of the challenges involved in the exercise.

Summing up his experience, the 32-year-old said: "Overall, the whole system worked really well… (and) we can say that the skies of Singapore are well defended by our guys."