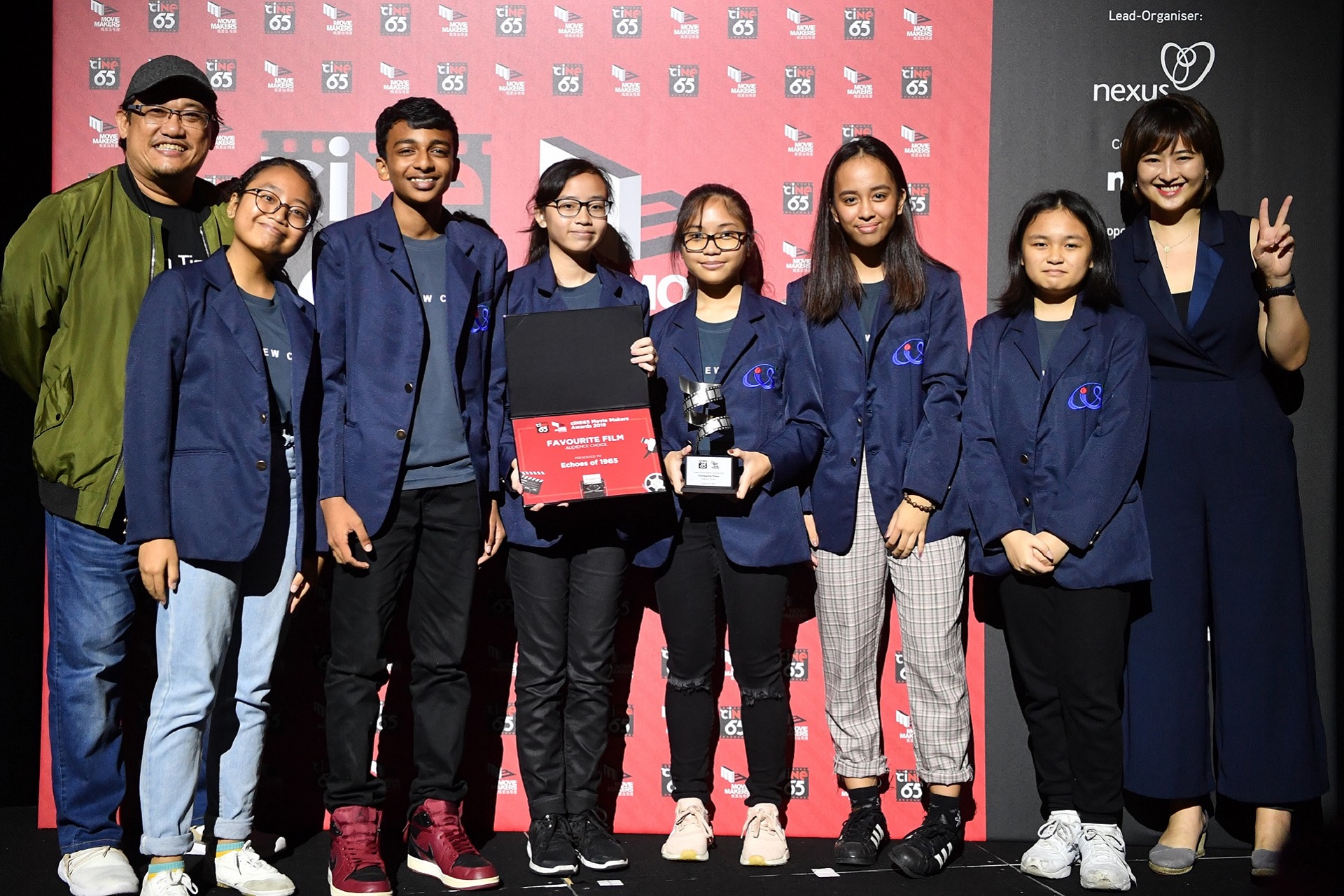 What does "Singapura" mean to you? This was the theme of this year's ciNE65 filmmaking competition.

For these Secondary Three students from Canberra Secondary School, "Singapura" evokes feelings of nostalgia for a time when life was simple and privileges were few.

"It's about heritage and tradition… When I hear 'Singapura', I (also) think of all the tough times. It makes me appreciate my elders," explained Sivesh Sivaganesh.

For this reason, Sivesh and his team chose to pay tribute to the Merdeka generation in their entry to the ciNE65 filmmaking competition.

Titled Echoes of 1965, their winning short film saw the team interviewing people from the Merdeka generation to hear about life in the kampong days.

The stories of their childhood – such as neighbours gathering outside the only house with a TV set to watch a show – were juxtaposed with paintings depicting those scenes. These were all painted by student Faith Ann Bonatan, who was also the film's director.

"Back then, they had a lot less than we do, but they still managed to survive and make it through together and give back to society," she explained. "It would be good if our generation can learn from that."

Fellow teammate Andrea Fababeir, who wrote the script with Sivesh, agreed: "I've learnt to be grateful for what we have. The seniors mentioned how difficult life was back then; now we are blessed with working facilities that we take for granted."

The team's creativity turned out to be a hit with online audiences. Echoes of 1965 was named the Favourite Film in the Audience's Choice Awards.

On 13 Jun, the team received their trophy from Senior Minister of State for Defence Dr Mohamad Maliki Bin Osman at the ciNE65 Movie Makers Award 2019 ceremony.

Into its fifth season, the short-film competition continues to be a platform for young filmmakers to tell their stories of Singapore and the meaning of home.

"This year is the Singapore Bicentennial. So it is appropriate that ciNE65 contributes to the national effort to look back into our history and reflect on how our nation came to be, how far we have come, and how we can go forward together," noted Dr Maliki.

"Through the theme 'Singapura', we wanted film-makers to share with future generations the wonderful stories that our forefathers have told on what makes us Singaporean."

Taking top honours this year was My Homeland: A Photography Project by Grandpa Chen, by former Temasek Polytechnic students. It won the ciNE65 Movie Makers Award in the Jury's Choice Awards.

The whimsical film tells the story of a young man, estranged from his grandfather, who returns from overseas to help the dying old man complete his photography project.

"When you go overseas, the first thing you do is to call your family and loved ones. It's the people that root us to where we are," said director Jastine Tan.

Currently a full-time National Serviceman with the Singapore Civil Defence Force, the 21-year-old was inspired by his teammate Eugene Voo, who had inherited his grandfather's camera and lens filters.

"What makes home home, and what makes people yearn for home, is people. And people are the core of Singapura," he explained.

It was this touching portrayal of human relationships that struck a cord among the jury.

Said judge Mr Michael Kam, 50: "We look at how the film best represents what 'Singapura' is about. What I appreciated was that the teams were telling it with a light touch while connecting with the audience. We wanted a film that touches the heart."

The senior lecturer of Ngee Ann Polytechnic's School of Film and Media studies added: "(The winning film) is really strong because it has those elements (and) was able to connect with the audience in an immediate way. That's what makes it very strong. In the lead-up to Singapore Armed Forces (SAF) Day on 1 Jul, more than 70,000 children will fold figurines and pen messages to thank their fathers for defending the nation. "It is essential that all players work together to arrive at a new equilibrium. This necessarily involves give-and-take on all sides.