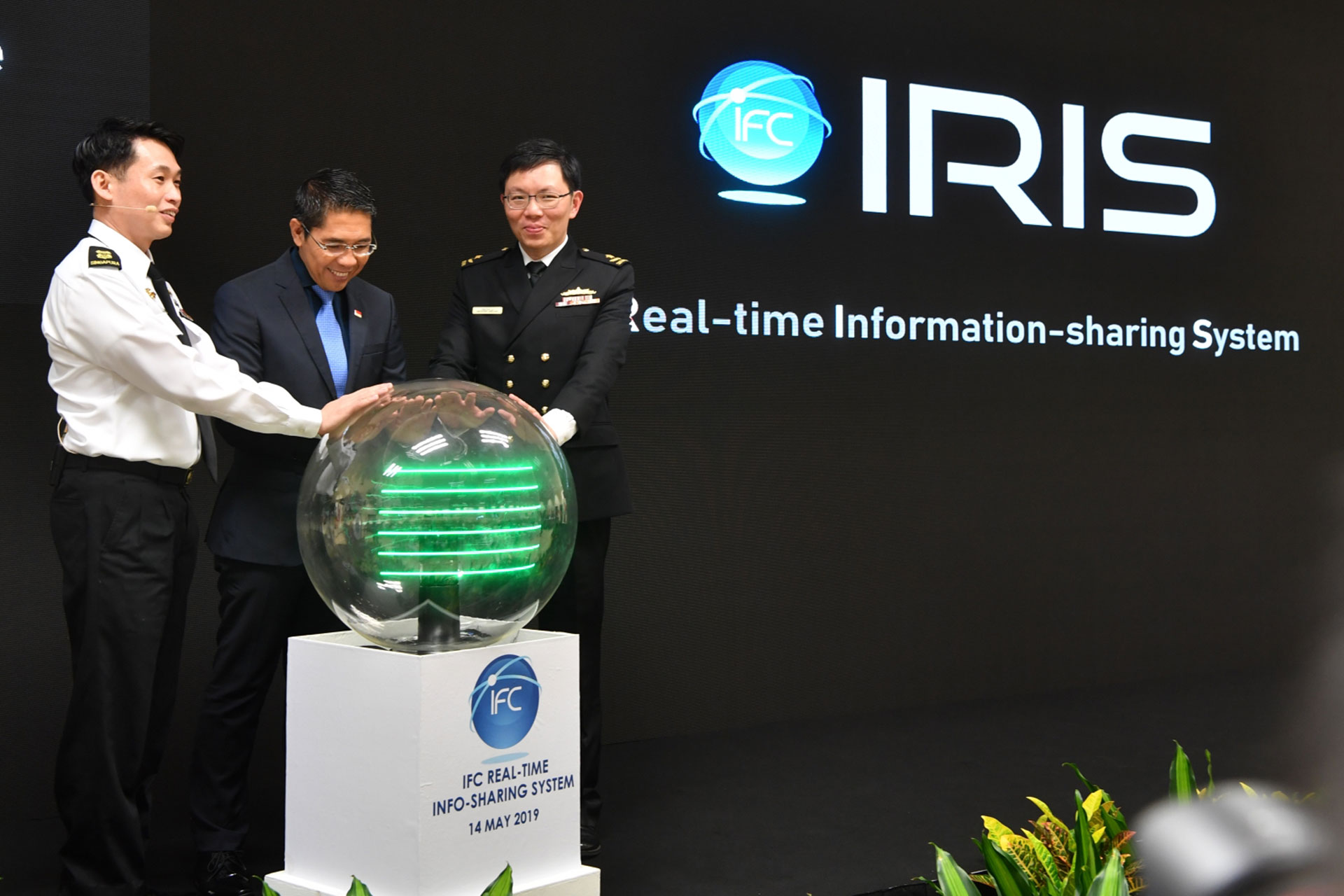 This will help them to quickly plan for operations when dealing with threats like piracy, sea robbery, maritime terrorism, contraband smuggling, illegal fishing and irregular human migration.

This was made possible by the IFC's Real-time Information-sharing System or IRIS, a Web-based portal. It was launched on 14 May in conjunction with the 10th anniversary celebrations of the IFC, at the Changi Command and Control Centre – located within the RSS Singapura – Changi Naval Base.

The IFC is a regional maritime security centre set up by the RSN in 2009 to facilitate sharing of intelligence among its international partners. It brings together international liaison officers (ILOs) from various navies to share, analyse, fuse and disseminate open-source information.

Senior Minister of State for Defence Dr Mohamad Maliki bin Osman, who officiated the commemoration event hailed the IRIS as an example of how the IFC leveraged technology to boost its capabilities.

The portal, he said, will enable better and faster coordination among partner navies, making cooperation easier and more convenient.

Its user-friendly graphical interface allows users to obtain a clear snapshot of the maritime security in the region, and to extract information of interest quickly. It also allows warships at sea to communicate with one another through text and video calls.

A successful trial of IRIS, which was developed by the IFC, was carried out with eight ships from various navies at the inaugural ASEAN-China Maritime Exercise in Zhanjiang, China last year.

Currently, IRIS has been made accessible to partners across 24 countries.

In his address, Dr Maliki commended the IFC's contributions to maritime security over the past decade. He also acknowledged the critical role of multinational partners in IFC's success.

For instance, in 2016, a tip-off from the IFC led to the arrest of the hijackers and the rescue of hostages on board oil tanker Hai Soon 12 within just eight hours.

More recently, in 2018, the INTERPOL, a French ILO and the IFC pieced together information that enabled the Indonesian Navy to capture a fishing vessel engaging in illegal fishing and slavery.

Said Dr Maliki: “Since its inception, the IFC's model of integrated and close cooperation has worked well due to the strong support from partners all over the world…

"It is anchored on a multinational team of international liaison officers, with strong linkages to a wide range of partners, from navies to enforcement agencies and the shipping community. This allows the IFC to leverage its strong partnerships and cue timely responses to incidents."

The IFC has linkages with 97 agencies from 41 countries. It is also able to obtain information from the shipping industry.

To date, 155 ILOs from 24 countries have been deployed to the IFC. Currently, 19 ILOs from 18 countries serve alongside 12 RSN personnel.

On the value of IFC, Lieutenant Colonel (LTC) Gary Ow, 42, Head of IFC, said: "We firmly believe that no single agency has all the information and resources to put together a complete picture to deal with maritime security threats… By working together in the IFC, we can achieve this mission."

Commander (CMDR) Kritsada Sudthisakron, 39, an ILO from the Thai Navy can attest to this. He has been working with other ILOs to collate and analyse data on illegal fishing, a key concern for Thailand. The information is sent to the ops centres in Thailand to tackle the problem.

Navies from countries far away from Asia also find value in deploying their officers to the IFC. For example, although Canada does not see much shipping traffic, it has been able to learn and work with the IFC on how it can cue its naval ships to look out for maritime threats, said LTC Jason King, 54, a Canadian ILO.

IRIS is currently being used at the ongoing Maritime Information Sharing Exercise (MARISX) hosted by the RSN. Participants got to practise using the portal to track vessels, sense-make situations and share information on maritime threats like terrorism and piracy.

Held from from 13 to 15 May, the exercise involves navies and coast guards from 36 countries, representatives from the shipping industry as well as international agencies such as INTERPOL and the United Nations Office on Drugs and Crime.