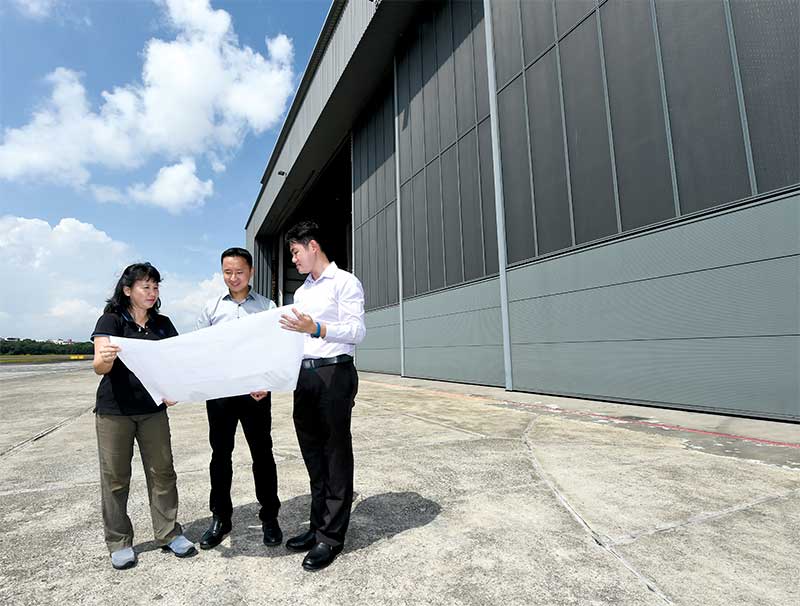 This cavernous hangar packs a wealth of green features, providing a cool environment for technicians who service the Republic of Singapore Air Force's fleet of utility aircraft.

An eco-friendly gem, tucked away in a corner of Paya Lebar Air Base, is hidden in plain sight. In fact, it looks just like any other hangar, that is until one enters the 21m-tall structure. (That height is to accomodate utility aircraft like the 12m-tall C-130 Hercules.)

The electric lights are not switched on, yet it is bright in the hangar. There are no fans or exhaust systems running, yet a gentle breeze can be felt. It all sounds a little magical, until the team from the Defence Science and Technology Agency (DSTA) who designed the complex explain its hidden features.

Said Mr Aw Boon Seong: "All these green features are not just to reduce utility costs. If that's all it is, it doesn't benefit the end-users. We also wanted the features to produce a conducive environment to work in." The 39-year-old is a Senior Architect in DSTA.

The Building and Construction Authority of Singapore gave it the Green Mark Gold Plus award in 2015 for the hangar design, making it the first aircraft hangar in Singapore to receive the award.

The award is the second-highest tier awarded in the Green Mark scheme, and assessors look for several hallmarks of a true "green" structure, including energy efficiency and indoor environment quality. One of the criteria is that the building must save at least 25 percent in utilities compared to a similar non-green structure.

All of the fixtures in the hangars, such as the water faucets, are highly efficient units. In areas where there are no feasible green alternatives, the DSTA team chose the most eco-friendly fixtures to minimise impact on the environment. All in all, the hangar saves about $17,000 in utilities per year and that is just a conservative estimate.

Instead of harsh electric lights, the green hangar uses a sunlight harvesting system that bathes its interior in soft daylight. The system uses an array of mirrors that follows the sun throughout the day to direct light into the space; unwanted heat is removed by a membrane diffuser. Electric lights are only used during night time or when the skies are overcast.

The best part? Even the Global Positioning System or GPS that guides the mirrors is solar-powered, which means that lighting the hangar does not consume electricity from the grid when the system is in use. 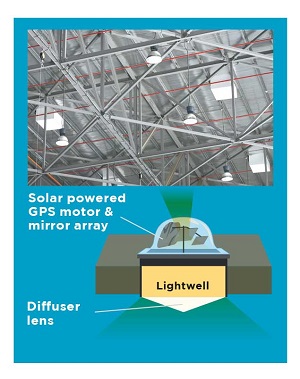 All around the building are specially fabricated steel louvres that allow air in naturally while providing security from intruders. This works in tandem with the roof-mounted turbine ventilators. As fresh and cool air enters the hangar from the sides, it is drawn up and out through the roof (by the ventilators) as warm air naturally rises – making the hangar a few degrees cooler. 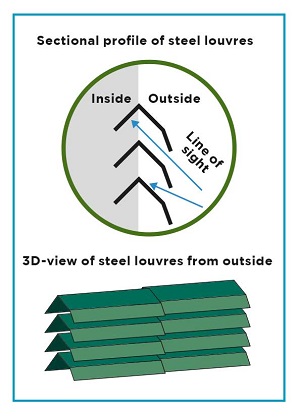 Instead of mechanical ventilators (think noisy fans and a winding network of ducts), the hangar uses wind-powered turbine ventilators installed on the roof to draw warm air out from the upper areas of the hangar. Using these onion-shaped systems allows the building to "breathe", mimicking a human body's inbuilt cooling system. This method of providing ventilation consumes no grid power and relies on the wind. Since the hangar is located beside a large flat expanse of land (aka the runway), wind is always abundant, making it a win-win situation. 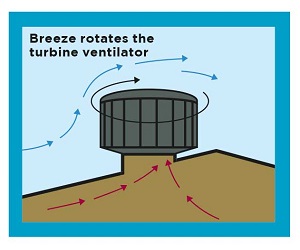 The hangar doors allow light in from the outside with translucent fibreglass panels installed from three metres upwards. The bottom three metres of the doors are still metal-cladded and opaque to provide security. 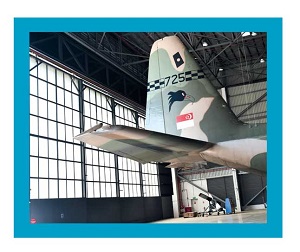