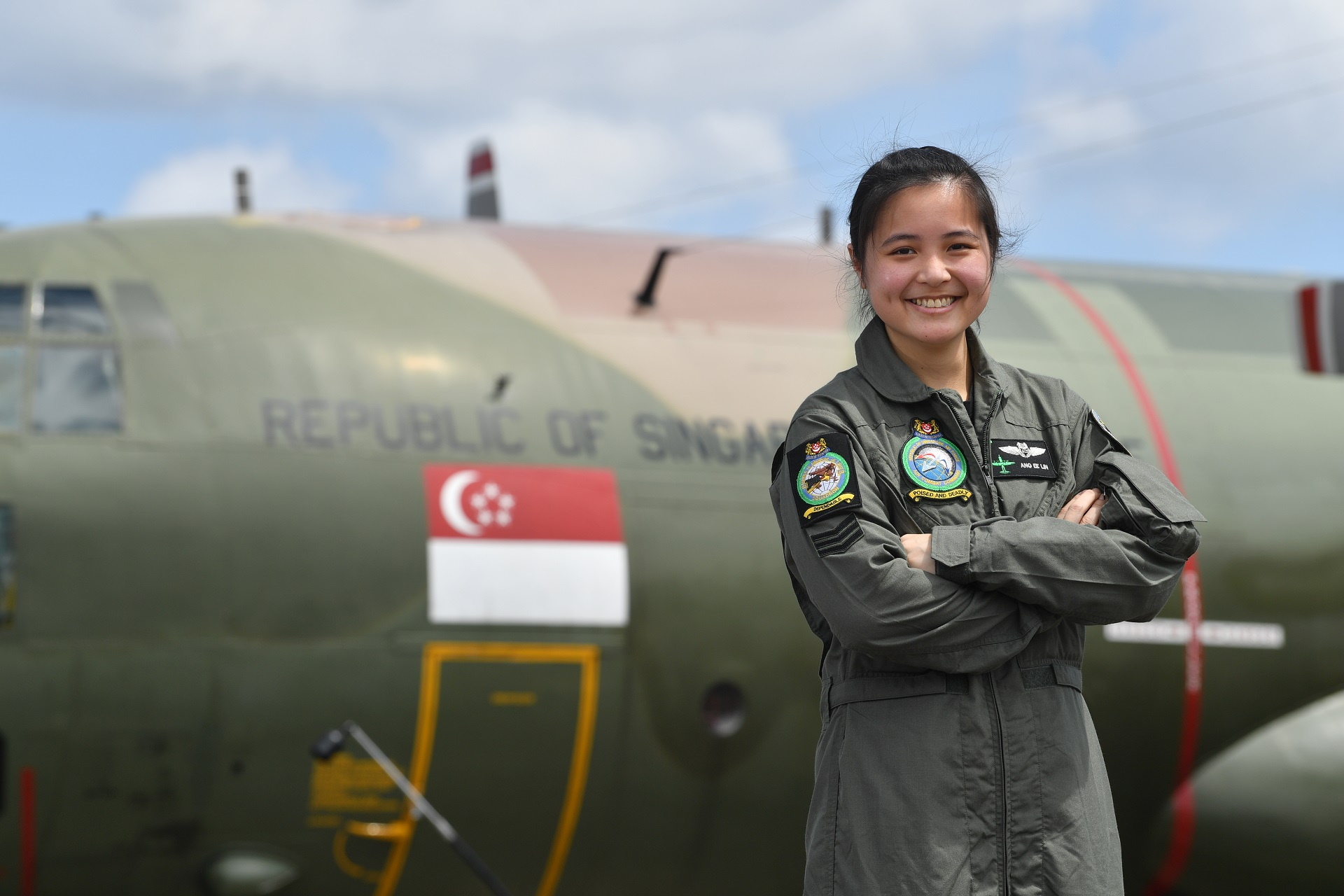 Rising to be the RSAF's first female C-130 loadmaster

3SG Ang enjoys being a loadmaster as it fits her personality and gives her an opportunity to travel and participate in different missions.

From making sweet treats like macarons to creating customised confections like a "lion dance" birthday cake, she's done it all as the head baker of a local bakery.

But although 3rd Sergeant (3SG) Ang enjoyed baking, the thought of signing on with the military had always been at the back of her mind throughout her seven years at the bakery.

As fate would have it, her friends asked her to attend a career fair in Nanyang Technological University in 2018. That was where she encountered the booths from the various Services in the Singapore Armed Forces.

3SG Ang, who loves sweet treats, used to be the head baker at a local bakery specialising in customised cakes.

It was there that she found out about the role of an Air Crew Specialist (ACS).

She was sold when she learnt that the job comprised a good mix of planning and scheduling as well as hands-on work, and provided the opportunity to travel and participate in different missions.

Excited to take on a new challenge, 3SG Ang promptly enlisted in February 2019.

3SG Ang (right) with her BMT chaperone 2nd Lieutenant (2LT) Lim Shi Yun, during her graduation parade in June 2019. 2LT Lim has since been promoted to the rank of Lieutenant.

Adjusting to the physical training during Basic Military Training (BMT) was not a big challenge for 3SG Ang as she had always been the sporty type. She was in the school's badminton team in lower secondary, represented her polytechnic in handball, and is an avid rock-climber today.

The C-130 transport aircraft was flying low in the afternoon. With the combination of air turbulence and waves of heat coming from the turbines, she got airsick.

"But my seniors told me to just fly more and get my body acclimatised to it. They were right – I'm much better now."

As a loadmaster, 3SG Ang acts as the eyes at the back of the plane when it comes to search and locate missions.

As a loadmaster, 3SG Ang is responsible for the loading of cargo onto the C-130, She also works closely with the pilots to assess the weight and balance of the aircraft and prepare the documents for before-flight checks.

What the 26-year-old enjoys most about her job is the opportunity to travel to different countries, work with different people and be involved in different missions.

In October 2020, for instance, 3SG Ang took part in SAREX INDOPURA, an annual bilateral Search and Rescue Exercise between the Singapore and Indonesia Rescue Coordination Centre.

"Our daily training paid off – everyone knew their roles. It was amazing to see how everyone worked together so well, from the time the squadron was activated to when we took off. Even personnel who were not part of the crew pitched in," said 3SG Ang.

"It was like a well-choreographed dance, sharp and precise."

It's been a year into the job and 3SG Ang is enjoying it tremendously. What keeps her going is that she never knows what to expect each day. In time to come, she is looking forward to supporting the Red Lions in their military freefall training.

"The Red Lions have always been part of the National Day Parade and I have always wanted to know how they operate before the jump. I'm excited that I will now have a chance to work with them."

Family spirit: 3SG Ang (right) enjoys the camaraderie she shares with her colleagues.

She is also grateful for the friendly and cohesive environment at 122 SQN, also known as the "Condors".

"In (operating and maintaining) an aircraft, there are pilots, engineers, navigators and loadmasters, and we are each in charge of a different compartment," said 3SG Ang.

"We may be doing different things but we know what each other is doing and we are always looking out for one another. We are like a family and it’s very nice to be here."