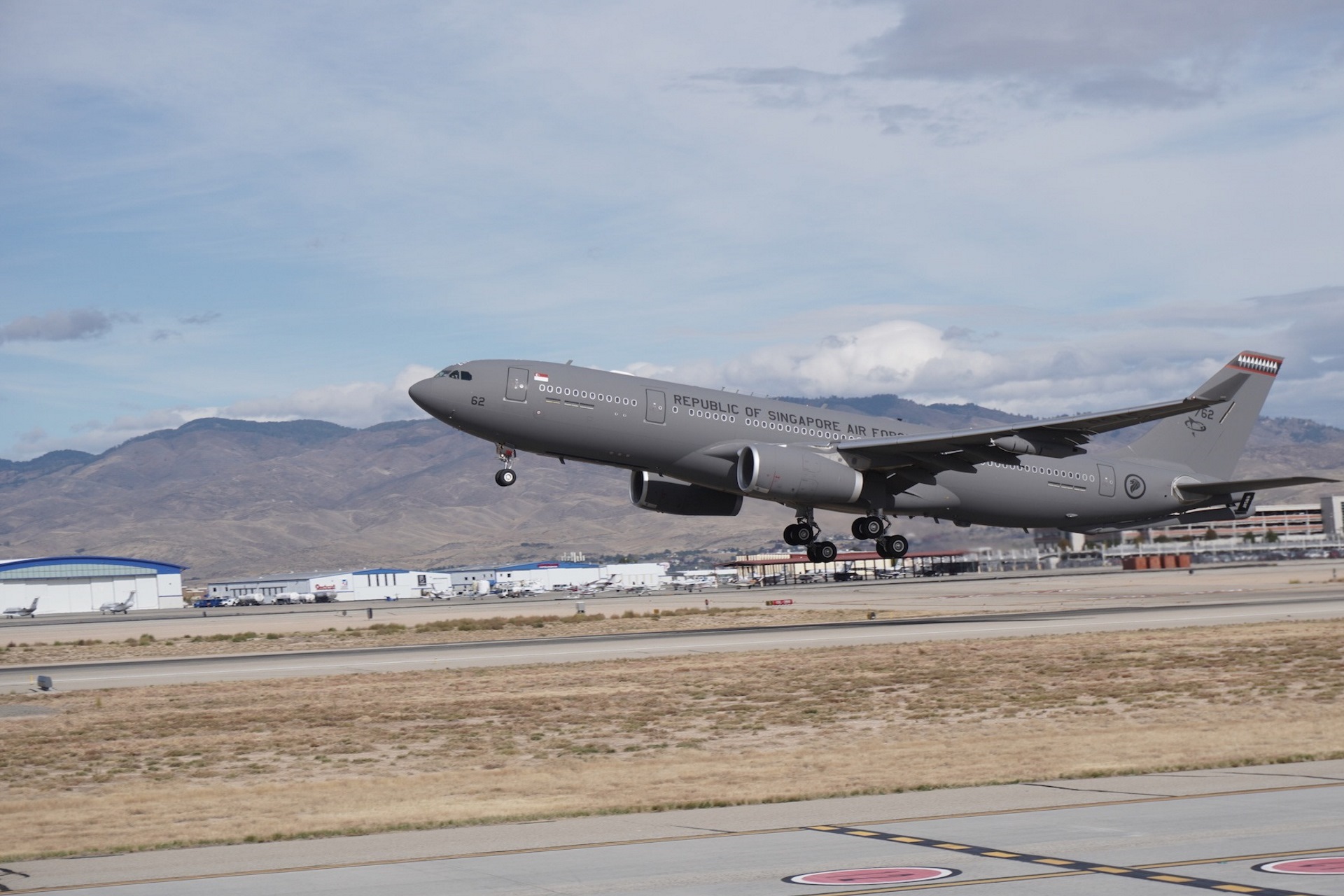 Tanker jets on the fly

Here's what it’s like to be an Air Refuelling Operator on the new A330 MRTT at Exercise Forging Sabre.

A battle in the air has begun. Fighter jets rush in to defend the skies and take down the enemy. After a long fight, they are low on fuel, but the mission must go on.

Enter the A330 Multi-Role Tanker Transport (MRTT), a petrol kiosk in the sky.

Staying away from the battle in a safe area, the A330 MRTT stands by to provide the fighter jets with the fuel they need to complete their mission.

This is part of the day-to-day training at Exercise Forging Sabre (XFS) 2019, held in Idaho, United States from 30 Sep to 10 Oct.

Controlling the system that fuels the F-16 C/D and F-15SG fighter jets in the sky is one of three Air Refuelling Operators (AROs), 1st Sergeant (1SG) Jonathan Augustine.

1SG Augustine at his ARO station in the cockpit.

Taking on many roles in XFS

XFS 2019 marks the A330 MRTT's first overseas exercise, as well as the first time refuelling operations are conducted at this exercise.

The aircraft was also used as a transport carrier for the exercise – it flew 20 hours from Singapore to Idaho, ferrying about 130 exercise participants as well as logistics.

This is the longest distance the A330 MRTT has covered, and the most passengers and cargo it has ferried since it was officiated last September.

"Honestly, I was really excited that they chose me to be one of the guys to come here," shared 26-year-old 1SG Augustine, with enthusiasm.

"In the past year we've been busy doing airlifts and bringing the fighters overseas. We've also done local air-to-air refuelling with our fighters in the build-up to this exercise."

"To be here is quite significant (for myself and the crew)."

The A330 MRTT crew being given the mission brief by pilot Captain Ronn Lim.

No longer "down and dirty"

While XFS 2019 marks many firsts for the A330 MRTT, air-to-air refuelling is not new to 1SG Augustine. He served as a Boom Operator on board the A330 MRTT’s predecessor, the KC-135R Stratotanker.

Tanking jets used to be a "down and dirty" task, said 1SG Augustine, who signed on with the Republic of Singapore Air Force in 2015.

"We would be prone, on our bellies, at the back of the plane. And we would look out the window and rely on our bare eyes to do the tanking."

Now, a remote camera system replaces the glass window. The AROs sit behind the pilot in the cockpit and monitor everything through a screen.

They don 3D-goggles to give them depth perception when tanking.

1SG Augustine checking the camera system of the A330 MRTT as part of his pre-flight checks.

The system is also more automated – it includes visual aids for the ARO to see the position of the "receiver", the fighter jet, and automatically disconnects from the "receiver" if the latter moves out of the safe zone for refuelling.

"The game-changer is really the use of cameras. In night-tanking we use infrared cameras that are much clearer than using lights when looking out the glass window in the KC."

The refuelling of an F-15SG taken from the ARO’s video feed. Photo courtesy of the RSAF.

The KC-135R crew underwent a 4.5-month overseas course to prepare them to take on the A330 MRTT platform. The older platform has been progressively drawn down since last September.

Part of the bigger mission

Despite the automation, skill is still critical to the role of the ARO.

"You may have all the aids but when you're going for the contact, it's all on you to take control," said 1SG Augustine.

He explained that each round of tanking is unique due to the weather, altitude and even the "receiver".

"Both of us are trying to get into a good position (for refuelling) so I'm reacting to the situation and predicting his movements at the same time."

A formation of three F-16C/Ds (front) and two F-15SGs (back) waiting to receive fuel from the A330 MRTT. Photo courtesy of the RSAF.

1SG Augustine is participating in XFS for the first time.

The ARO, whose father served as a F-16C/D air force engineer, added that although the A330 MRTT is usually away from the fight it still plays a big part in the mission.

"There is a sense of pride in being involved. As much as we are behind-the-scene in some sense, we know our role and we know how important we are in the big picture of things." 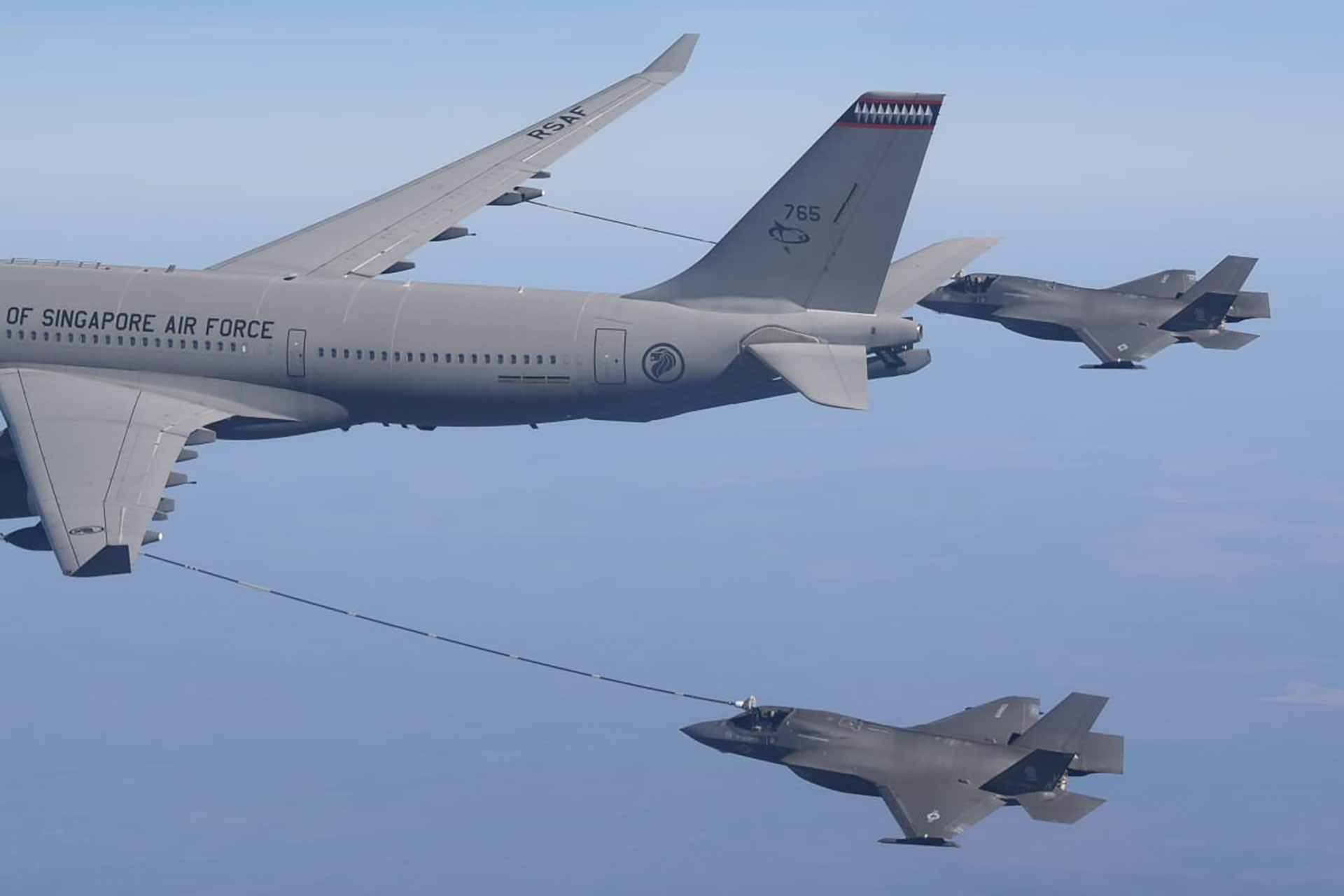