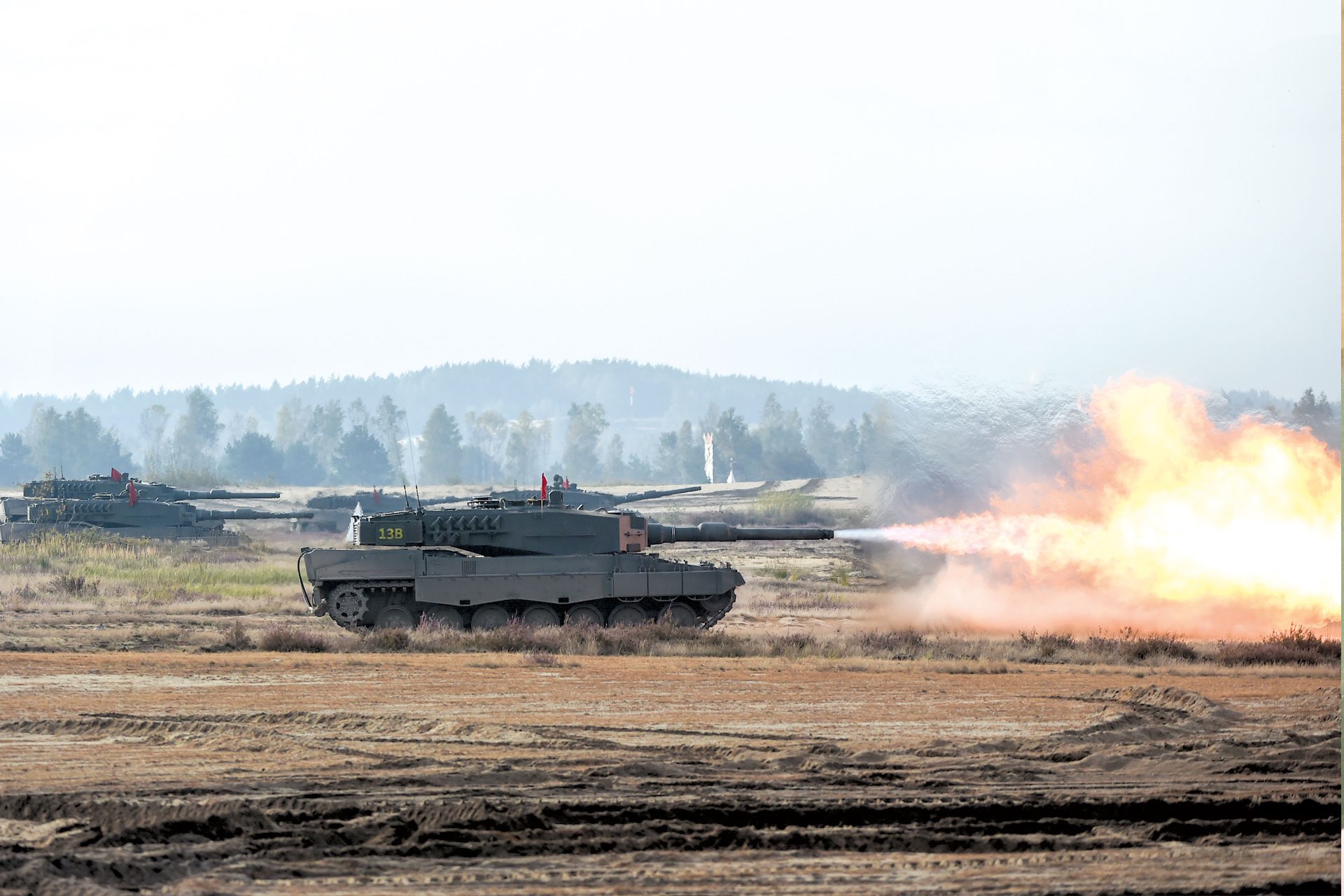 TANKS FOR THE MEMORIES

For over 150 tankees on In-Camp Training (ICT), Exercise Panzer Strike 2017 felt almost like a gathering of long-time buddies. Find out why their spirits were at an all-time high despite the challenges!

They say that after being together for seven years, you need a change of environment sometimes, to channel some excitement into the relationship.

For the Operationally Ready National Servicemen (NSmen) tankees from Headquarters Armour, that opportunity came in this year's Exercise Panzer Strike 2017, during their seventh ICT.

Held in Oberlausitz Military Training Area, Germany, from 19 Sep to 1 Oct, the exercise was a rare chance for these NSmen to conduct company live-firing with Leopard 2SG Main Battle Tanks, to practise command and control, and test out different manoeuvres.

As the tanks raced across the vast German terrain, the ground trembled. Bright orange balls of flames exploded across the barren land, closely followed by intermittent shock waves as the tanks took turns to take down both moving and static targets. It was a sight to behold.

Despite being NSmen, they achieved an almost perfect score -- hitting more than 95 percent of the targets in record time. This was a critical test of their proficiency and all they had been training for.

PUTTING IN THEIR ALL

Commanding Officer (CO) Major (MAJ) (NS) Ryan Tan explained: "The guys are putting everything they have learnt over the years into this exercise -- it is the ultimate test of their professional capacity as an NS armour unit."

The 35-year-old is the vice-president of mergers and acquisitions and strategy at telco StarHub.

Having seen how they fared, Commander 8th Singapore Armoured Brigade Colonel (COL) Woo Sin Boon had nothing but praise for the unit. "Despite being very raw initially…they put in their all. We saw the crew helping each other recall their drills and achieve good results."

The 39-year-old added that it was essential to expose NSmen to scenarios mirroring a war situation as they form the backbone of the Singapore Armed Forces. Providing a high sense of realism, this exercise provided just that opportunity.

"Training for two weeks every year in Singapore is not enough. It is really important to keep them current and continuously challenge them in scenarios as close to what they would expect during war, because they are the ones whom we will rely on when the time comes," explained COL Woo. "It is really important to keep them current and continuously challenge them in scenarios as close to what they would expect during war, because they are the ones whom we will rely on when the time comes."

AS REAL AS IT GETS

This realism was what excited Lieutenant (LTA) (NS) Goh Si Liang. It was the first time the platoon commander got to command a full platoon for live firing. He had to make sure that he had oversight of the positions of all the tanks -- no easy feat as they were spread out extremely far apart across the vast terrain.

"Unlike in Singapore where I can easily spot all the tanks, I now have to rely on the different tank commanders to inform me of their locations. (This is) so that whenever there's a target, I can (ensure)…there will not be any cross-firing," said the 30-year-old, an event organiser at Blackvine, an event management company.

Using live rounds and hearing them explode in the distance also added a heightened sense of excitement. LTA (NS) Goh explained: "From making calls on the ground to fire at a target to feeling the firepower of the tanks, what we get to do here is very realistic. This gives me a sense of empowerment and I feel more confident after this exercise."

"From making calls on the ground to fire at a target to feeling the firepower of the tanks, what we get to do here is very realistic. This gives me a sense of empowerment and I feel more confident after this exercise." For tank loaders like Corporal First Class (CFC) (NS) Tarun Jayaram, their challenge was to load as fast as they could.

"In a live range, targets can pop up anytime, anywhere, so if there's a need to repeat fire on a target that we missed, or engage a new target, we are ready within seconds," said the 28-year-old freelance band director.

Fellow crewmate and gunner Corporal (CPL) (NS) David Koh, 28, added that training in such vast terrain allowed him to hone his scanning skills. In Germany, he often had to scan a larger area to spot targets, while the range constraints in Singapore do not allow for this.

The investment analyst at asset management firm Castle Family Office explained: "I'm able to use the full capabilities of scanning, and there is an element of surprise when the target pops up and we fire. As a gunner, this trains my flexibility and it's a test of how well I can adapt to the different scenarios."

To most of these NSmen, this two-week ICT felt like a reunion of old friends. From NS mates to ICT buddies, they have certainly come a long way -- nine years of friendship made training not only more enjoyable, but also more effective. In fact, the chemistry within the unit was almost instinctive.

CFC (NS) Tarun said: "Many times when CPL (NS) Koh is about to ask me to do something, I already know what to do. It happens very often. He just has to say my name and I will perform the task."

With four people -- the tank commander, driver, gunner and loader -- operating in one tank, knowing one another's quirks and habits eased the flow of communication. CPL (NS) Koh added: "Because we all know each other so well, when we operate the tank, it's as if the tank is moving as one entity instead of four people doing four different things on their own."

The last time these NSmen trained together in Germany, they were still fresh-faced Full-Time National Servicemen. Their breaks were constantly peppered with rowdy laughter, reminiscences of the good ol' days and catching up with each other's lives.

Said MAJ (NS) Tan: "The men are constantly in high spirits and it really shows their commitment. This is testimony to the bonds among the unit and the strength of the command team. This exercise has been an invaluable experience for all of us."

As CFC (NS) Tarun put it: "It's good to be back and see that we're still maintaining the competencies that we honed during our days of full-time NS. Being NSmen, we don't do this every day and it's reassuring to know that we haven't lost our touch."