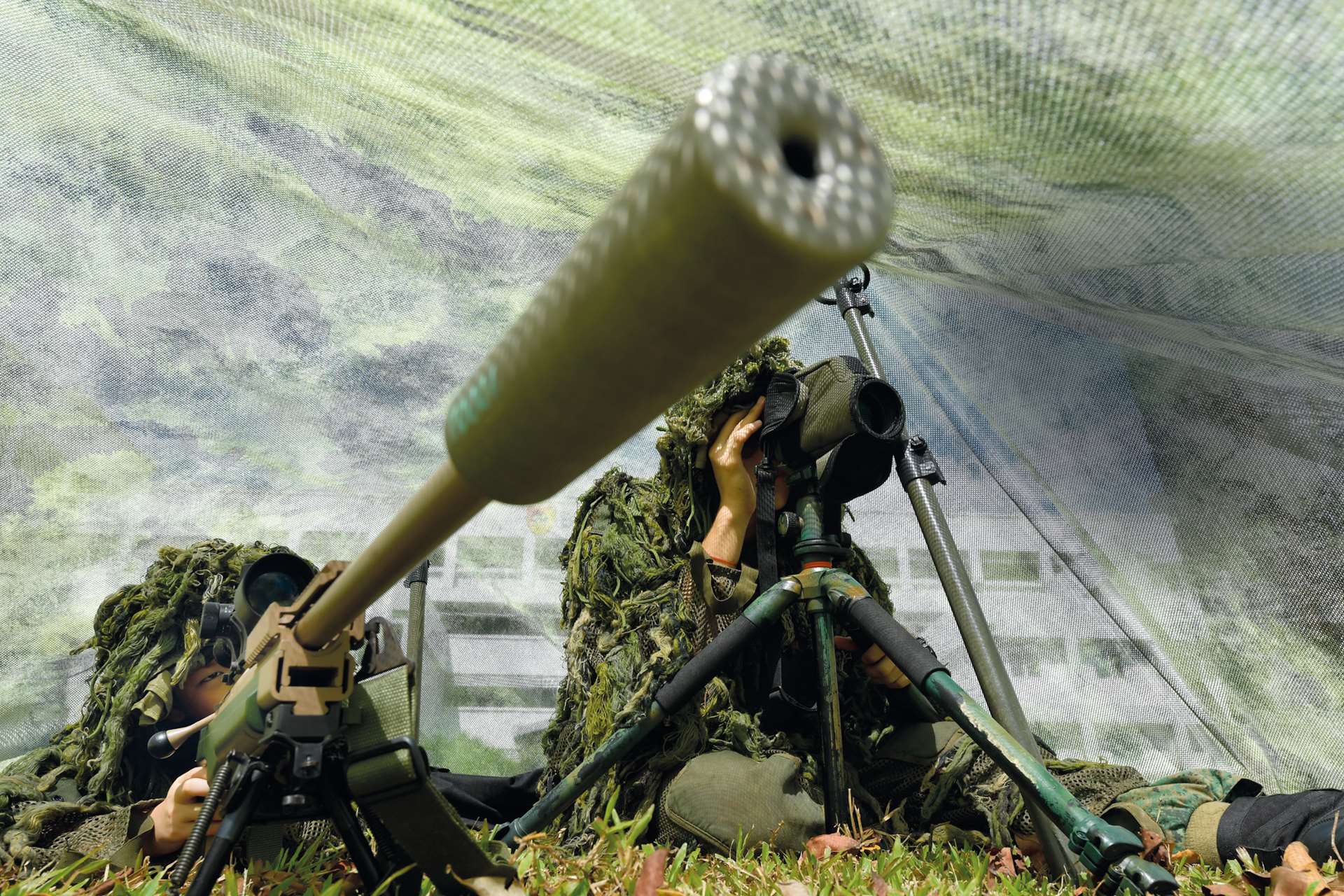 Aim and shoot: Me and my spotter buddy 3SG Nicholas search for our target from inside the hideout.

It was a hot and sunny morning. I was overjoyed and woke up early to get myself prepared for a fun day because my father told me that we were going to meet snipers from the Singapore Army at Kranji Camp II!

I learned that a sniper is a military marksman. His role is to locate and engage the enemy from a hidden position. Snipers are specially trained and equipped with highly-accurate rifles and high-magnification optics.

Snipers use two different rifles: the SAKO TRG-22 (left) and the M110 (right). 3SG Jeremy showing me how to operate these rifles.

Check out my guns

3SG Daniel and 3SG Jeremy introduced their rifles to me. The first is the SAKO TRG-22, a bolt action sniper rifle. It has a scope that can magnify from three to 12 times and a control for the laser target pointer.

The second weapon is the M110 semi-automatic sniper rifle that can hold up to 20 rounds. Unlike the TRG-22, which can only fire one round at a time and needs to be reloaded after each shot, it can fire rounds continuously.

The snipers guided me patiently in how to use the weapons. It was really exciting as I was given the opportunity to try loading the rifle, taking aim and pulling the trigger. It was my first time holding a real weapon! Under their guidance, I learned quickly.

With the laser rangefinder, I can immediately find out the distance between me and the target, and the direction I am facing.

I put on the ghillie suit that snipers wear to blend into the surroundings and conceal themselves from enemies. It felt very warm.

Then 3SG Nicholas brought me to the hideout, which is a camouflaged tent. It has many tiny holes to allow the snipers to see their targets. The tent was so low that 3SG Nicholas and I had to crawl into it. It was also really very cramped. There was barely enough space for both of us!

3SG Nicholas told me that every sniper usually has a buddy.

He calculates the distance and makes the wind call. He also helps the shooter to make adjustments to his aim.

I felt comforted hearing this as both snipers can rely on and look out for each other during dangerous missions.

I was perspiring profusely in the tent with the ghillie suit. However, 3SG Nicholas who was my spotting buddy, did not complain about the heat.

He guided me professionally and took very good care of me. During a mission, snipers have to stay in the tent even when it is hot or raining and muddy.

Soon, we came to the end of the visit. Before I left, the snipers told me that they hope I can enlist into National Service with my best friend so that we can be sniper buddies together.

I thanked them and waved goodbye. I felt sad that it ended, but I am happy because I learned many new things during this special trip! The SAF's Army Medical Services were deployed on 7 Apr to support the Ministry of Manpower and the Ministry of Health in providing primary healthcare such as basic health screening and consultation services to two foreign worker dormitories.