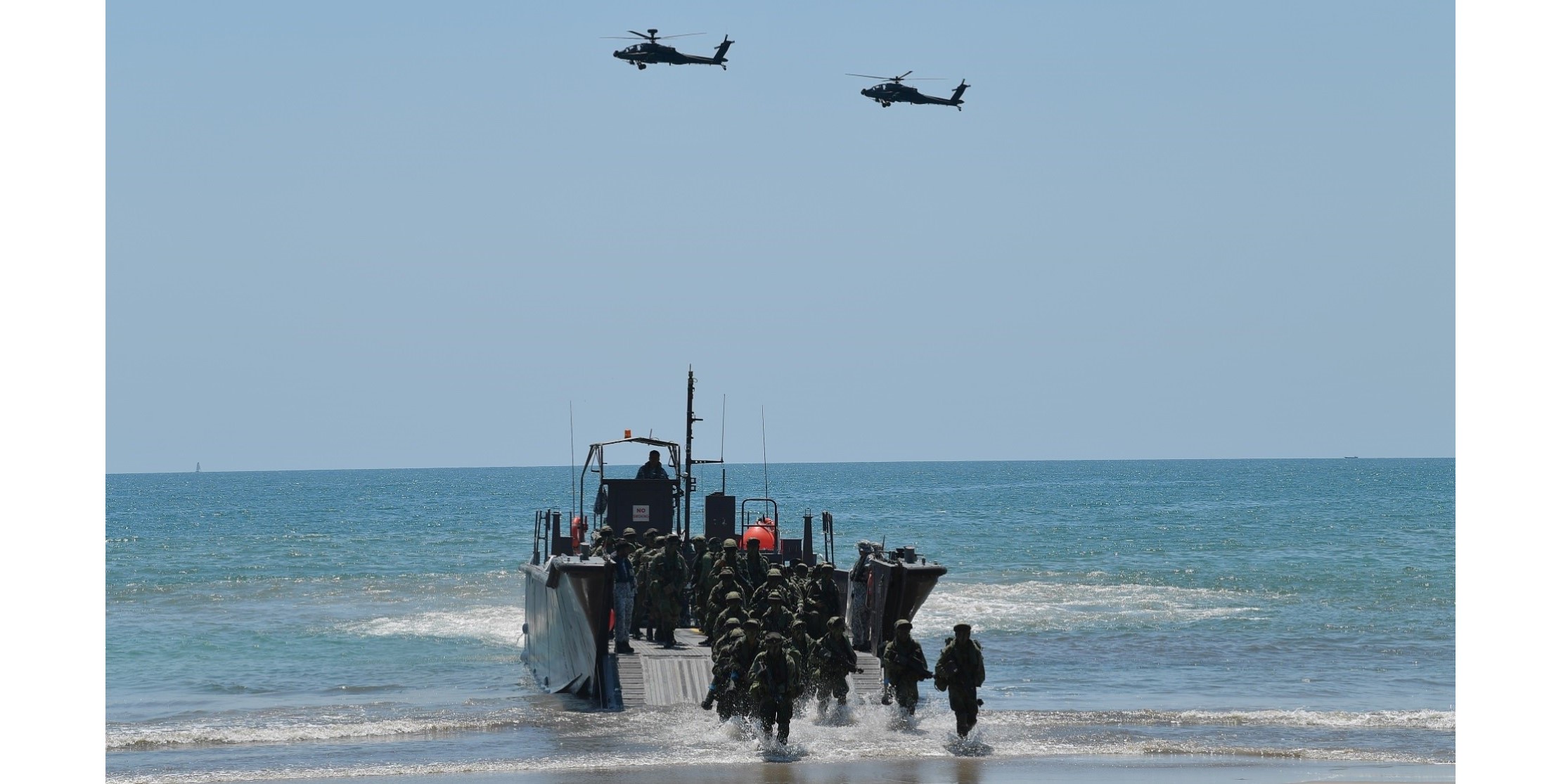 // Photos by Chua Soon Lye and courtesy of RSN & RSAF

The midday sun beats down mercilessly on the beach front. All is still, for now.

From the distance, three tiny vessels appear on the horizon. These are naval fast craft utility (FCUs), carrying full loads of ground troops. They had been deployed from large Landing Ships Tank (LSTs) and are swiftly barreling towards shore.

On reaching the shoreline, the soldiers lie in wait in the FCUs. There is an unsettling stillness.

The silence is broken by the overhead whir of choppers. Two Apache helicopters zoom in to provide air cover. At this moment, the FCU ramps open and the soldiers gush out, running towards the sand, sounding their rallying cry. The battle begins.

For the first time, two Landing Ships Tank (LSTs) will be participating in the exercise, Endurance-class RSS Endurance and RSS Persistence. It is the RSN's biggest showing at the exercise.

Joining the SAF is the Australian Defence Force (ADF). In addition to troops who will be carrying out missions such as heliborne insertion with soldiers from 3rd Battalion, Singapore Guards (3 Gds), the Royal Australian Navy's (RAN's) Canberra-class Landing Helicopter Dock (LHD) HMAS Adelaide will also be participating in this bilateral exercise.

A CH-47F Chinook Heavy Lift Helicopter landing a Land Rover vehicle on the deck of RSS Persistence. Vertical replenishment operations such as this is not easy to carry out as it requires tight coordination between the helicopter crew and the ship's flight deck operators. The pilots must also maintain close communications with their air crew specialists who are their eyes and ears, helping them to find the exact landing point to place the underslung supplies.

Another of the integrated missions conducted between the Chinooks and LSTs is the deck landing for the purpose of transporting troops on or off the ship. Here, a flight deck marshaller (in yellow vest) and flight deck officer (in white vest) direct the aircraft to land safely on the deck.

The crew refuelling the Chinook on RSS Persistence.

Soldiers storming the beach as they disembark from the FCU. Swarming overhead are two AH-64D Apache attack helicopters, ready to give protection to the advancing troops below.

ADF soldiers (front row, proning) participating in heliborne troop insertion training with SAF soldiers from 3 Gds. Upon exiting the Chinook, the soldiers must quickly take their places and prone on the ground in a defensive formation for the aircraft to leave safely. Exercise Trident one of the key exercises where both militaries are able to exercise together and learn from one another.

Major (MAJ) (NS) Charles Ng overseeing his team of lane marshallers as they guide the FCUs to the shore. As Beach Master, his role is to oversee the set-up of the beach landing area and lanes so that the ship-to-shore projections can be conducted smoothly.

Said the 40-year-old: "It's a good experience to be a part of such a large-scale exercise because it offers a lot of learning opportunities. Managing the challenging conditions that we face, such as high winds and sea states, add to the realism of the training."

2nd Lieutenant (2LT) Farain Efran Lau Chang Fa Bin Muhammad Heikel Lau, an Assistant Platoon Commander, walking with his fellow guardsmen to embark on the FCU. The Full-time National Serviceman used to be a transport operator but had his PES Status reviewed medically so that he could take on combat roles.

And he is glad he re-started his Basic Military Training journey; it has given him the chance to participate in his first overseas exercise. "I wanted to experience more in National Service, and this has been a great opportunity, coming here and meeting the ADF.

"We did a platoon battle course with them where we took turns assaulting an objective. After each platoon's turn, we would give each other feedback. There were some very good exchanges. It was interesting to hear their perspective. I learnt a lot and I would want to implement some of their feedback in our training in Singapore," said the 22-year-old.

The guardsmen boarding the FCU to be transported to the LST.

Besides troops, the FCUs are also able to ferry vehicles such as these 5-tonner trucks.

The soldiers disembarking from the FCU after it arrives at RSS Endurance.

For Flight Deck Specialist Military Expert 1 Jeremy Nelson, being able to carry out integrated training with the RSAF is a rare opportunity. As part of the chock-and-chain crew, his role is to secure the helicopters when they land on the LST's deck. To prepare for Exercise Trident, he and his team underwent theory lessons and even practiced latching down a table, just to make sure they got their fundamentals down pat!

Said the 25-year-old: "Training here raises my competency because the sea state is very challenging. In Singapore, we do mainly component training. It's fulfilling to see how my role contributes to the larger mission in exercises such as troop management."

An FCU leaving from RSS Persistence (centre). To its right is the RAN's HMAS Adelaide.

With two LSTs involved in the exercise, the complexity of the missions increases, said Senior Lieutenant Colonel Daniel Koh, Commander of the Exercise Trident Task Group. "The command and control is more complex: on a single platform, communications is straightforward and can even be done face-to-face; with two ships and a foreign counterpart who has its own comms system, this adds to the complexity of coordination efforts as well," said the 42-year-old.

"However, training with the ADF and RAN has advanced our abilities in amphibious planning and operations. We also have the chance to work with the LHD and learn about their ship-to-shore projections," he added

Defence Minister Dr Ng Eng Hen (in blue shirt) speaking with with exercise participants from the SAF onboard RSS Endurance. He visited SWBTA on 28 Sep, where he met and interacted with SAF troops. He also visited HMAS Adelaide and met with ADF personnel.

During his visit, he reiterated the immense value of training at SWBTA for the SAF: “I've been speaking to some of the troops. The very realistic training situations is a morale booster because they get to test their own capabilities and see it being put together.

"It's been very valuable and I would like to thank the senior commanders of the ADF for these capabilities and I'm very glad that through these exercises our military-to-military relationship has strengthened considerably. It's been a very successful Exercise Wallaby and Exercise Trident this year." 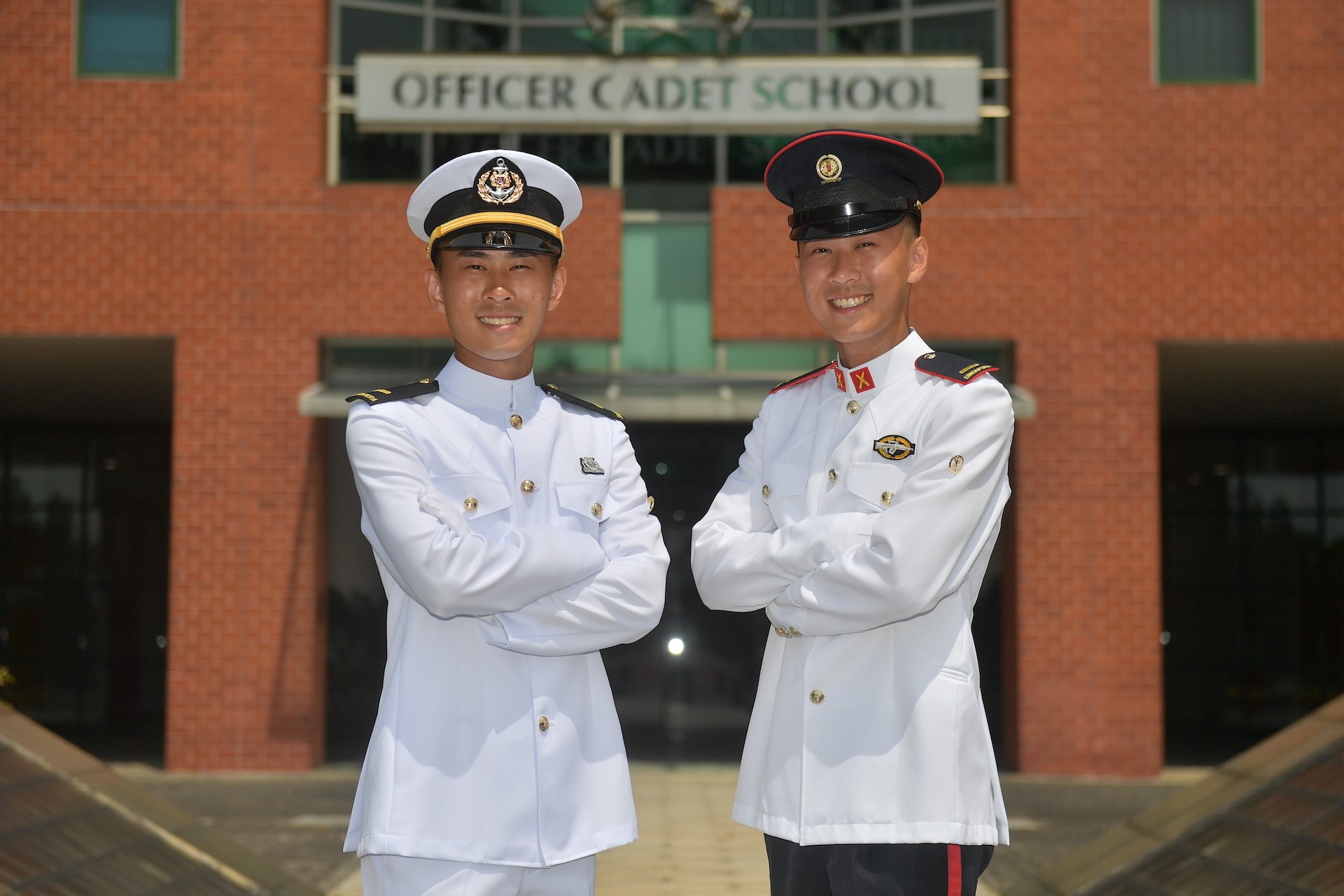 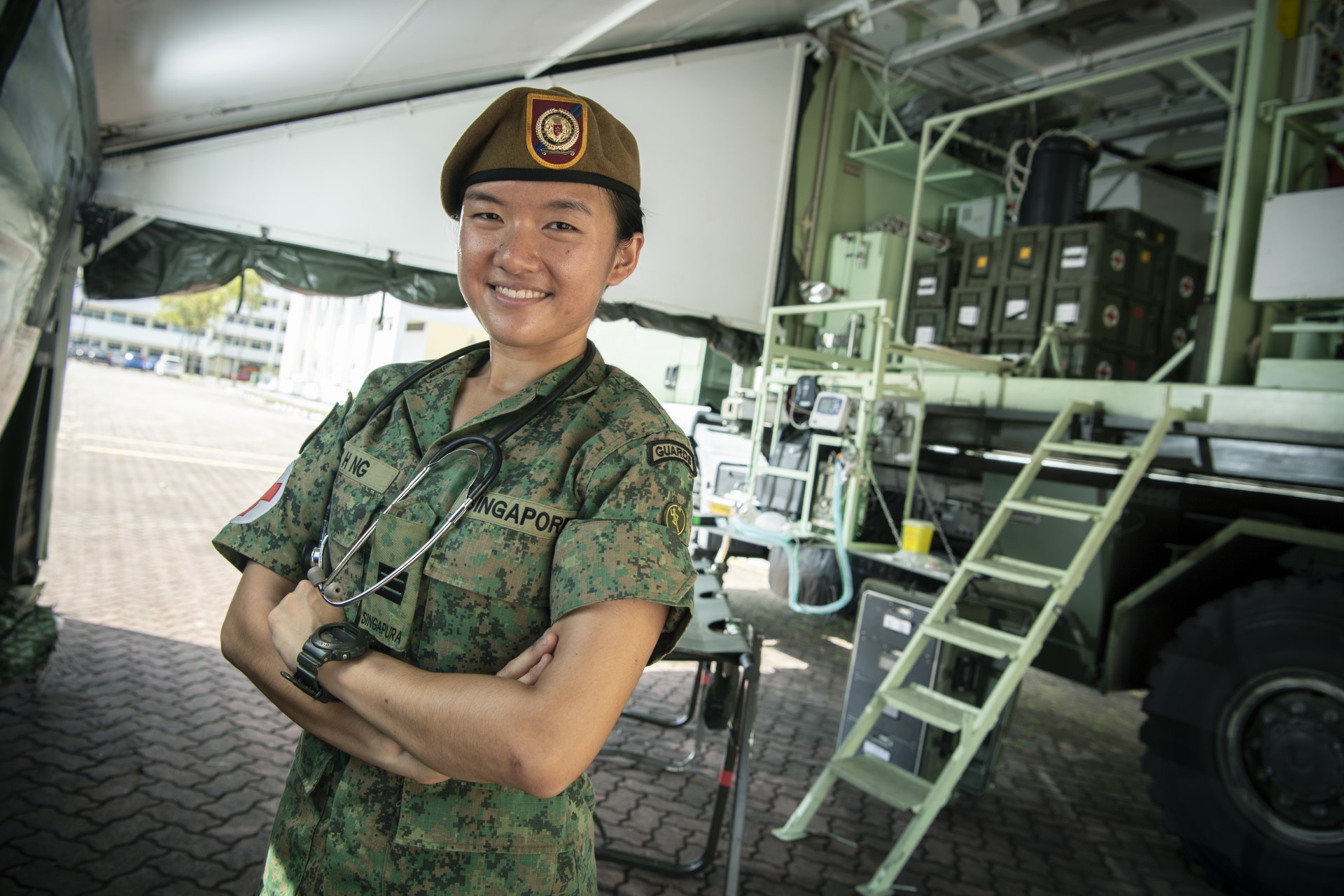 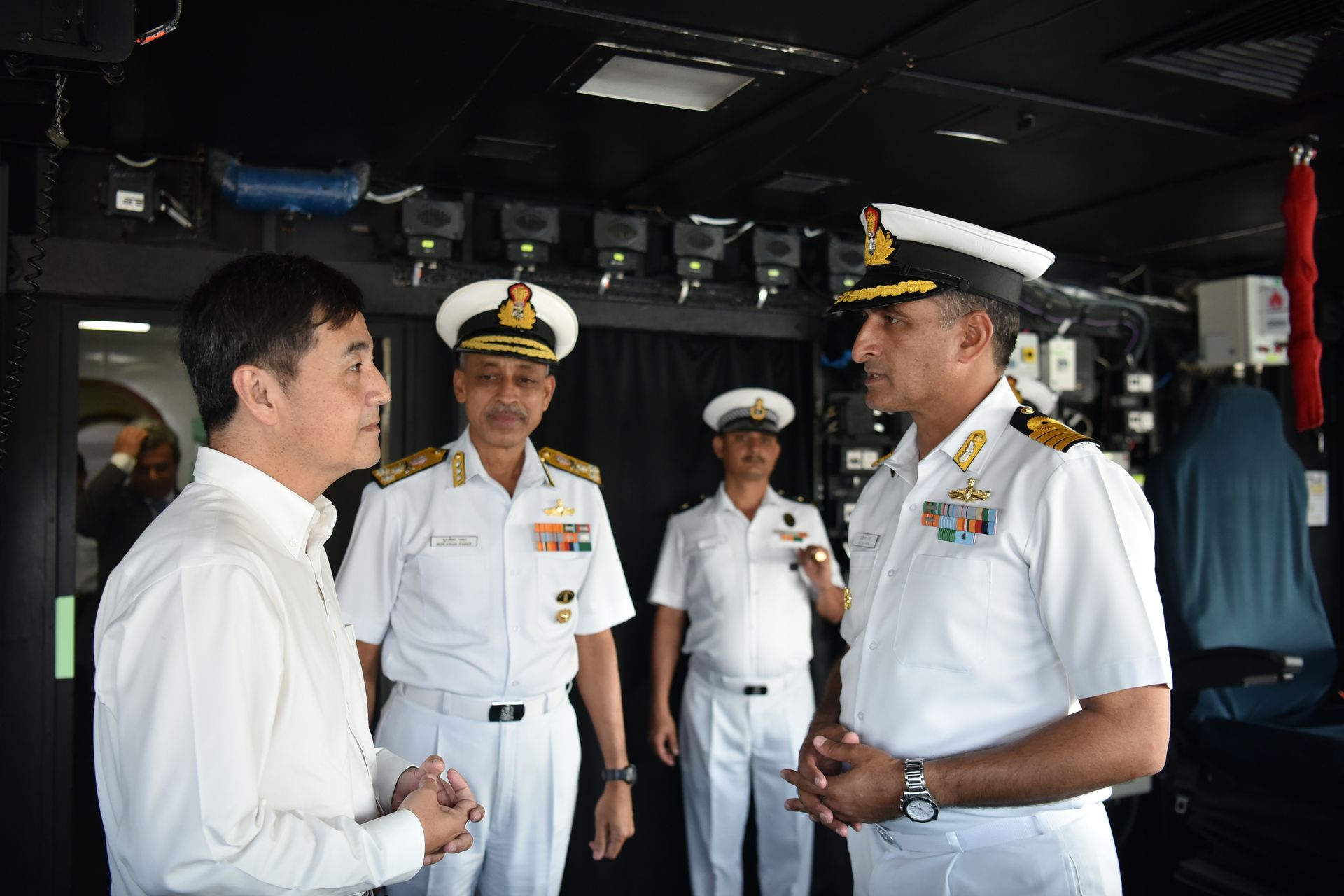 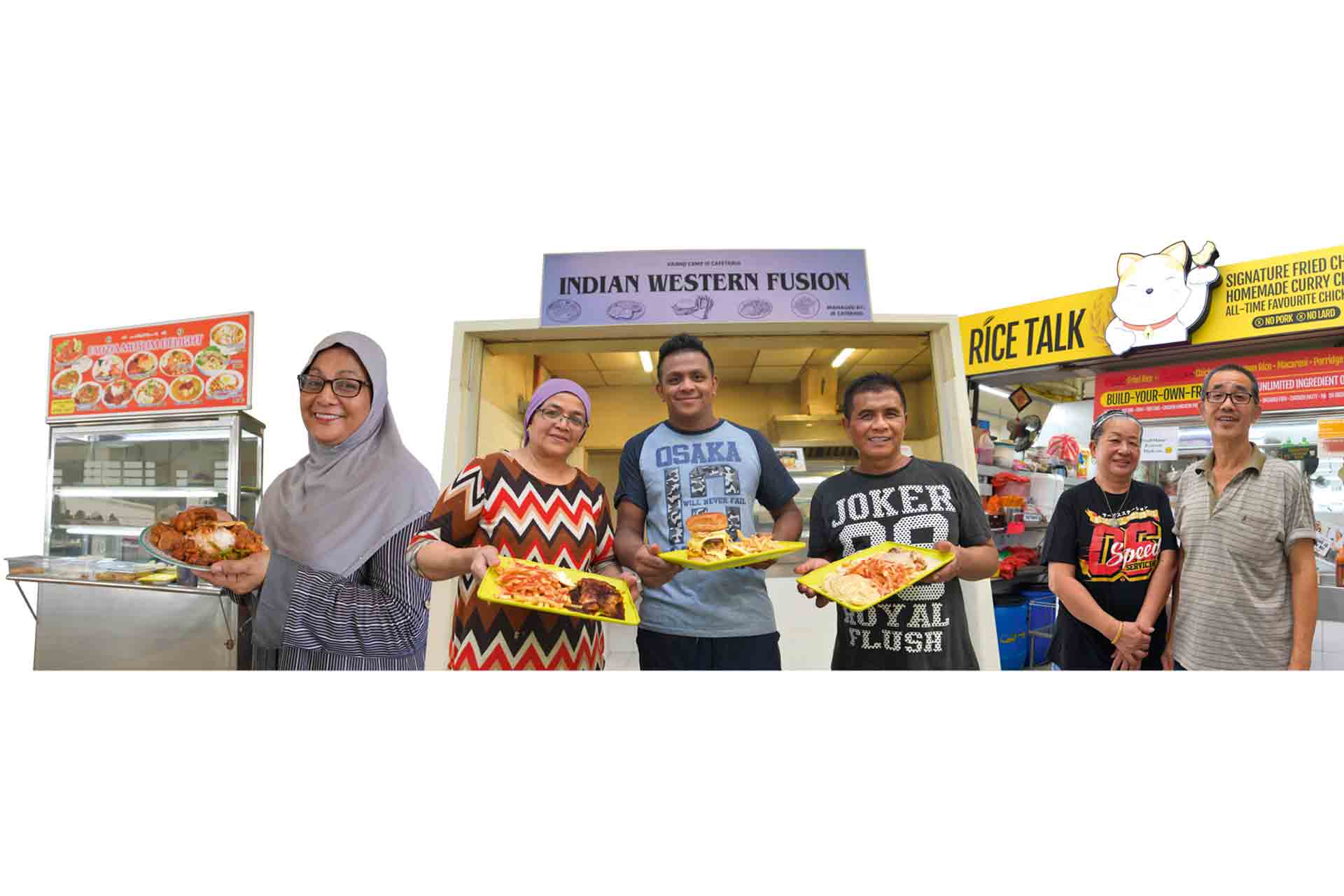 We hunt down good eats at three Singapore Armed Forces (SAF) canteens. Don’t read this on an empty stomach. 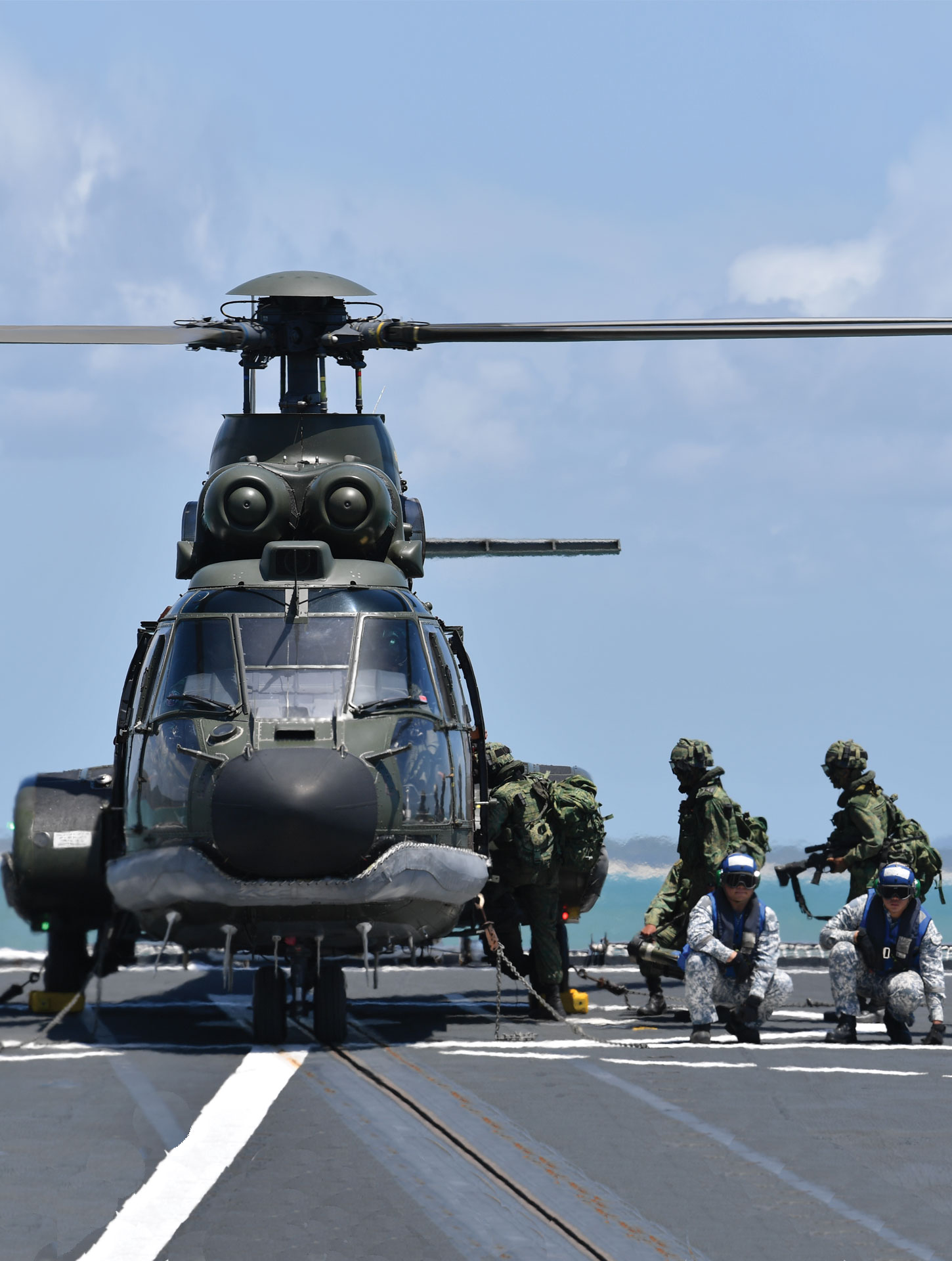