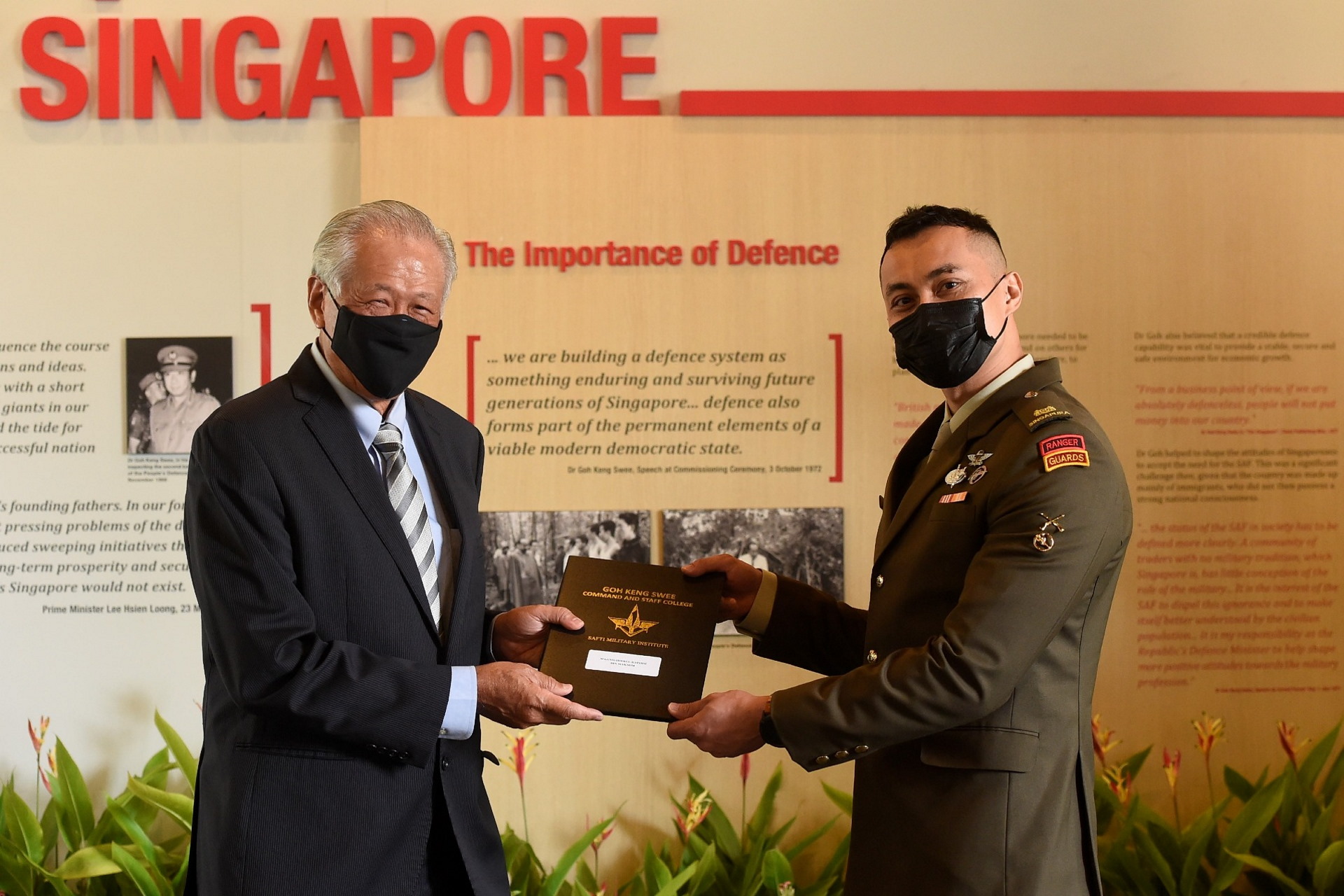 Dr Ng meeting the CSC top graduates and the CSC(NS) distinguished graduates after the graduation ceremony. Minister for Defence Dr Ng Eng Hen officiated at the Goh Keng Swee Command and Staff College (GKS CSC) Command and Staff Course (CSC) 2021 Graduation Ceremony, held at the SAFTI Military Institute (SAFTI MI) this afternoon. This ceremony marked the completion of the 52nd CSC, 22nd CSC (National Service), and the 16th and 17th CSC (Executive). A total of 237 leaders graduated from the GKS CSC, comprising 124 regular officers, 53 National Service (NS) officers, 37 military experts, and three warrant officers from the Singapore Armed Forces (SAF); one Singapore Police Force (SPF) officer; and 19 international officers from 11 countries[1]. The CSC, CSC (NS) and CSC (Executive) prepare officers for senior command and staff appointments in the SAF, and are the highest level of formal military education offered in Singapore for regular, NS and international officers. In view of safe management measures, the graduates were split across different venues in SAFTI MI during the ceremony.

Addressing the graduands, Dr Ng highlighted the need to remain vigilant to evolving security challenges and cited the developments in Afghanistan as a recent example. He said, "I am glad that the SAF could play a small role in evacuating Afghan refugees from Qatar to Ramstein Air Base in Germany. The Republic of Singapore Air Force and the Army were mobilised with little prior notice and were airborne within 48 hours of notice…I am proud of the men and women of the SAF because they understood the urgency for every evacuee that was waiting at Qatar. Every evacuee that they successfully moved from Qatar to Germany, I expect their lives will be transformed. It reminds us that terrorism continues to be a clear and present threat to all democratic nations, and is one that seeks to rob us all of our liberty and freedom through force and violence, whether as individuals or countries. We must expect that terrorists and their networks in South-East Asia would be encouraged by the events in Afghanistan. We must therefore redouble our efforts here to protect our way of life."

Dr Ng added that some changes brought about by COVID-19 would be irrevocable and militaries would need to learn to adjust to a post-COVID world, in areas that included building capabilities against bioterrorism, adapting to hybrid forms of training and communicating, as well as enhancing preparedness to combat threats from the cyber and information domains.

[1] The 11 countries are Australia, Brunei, Germany, India, Indonesia, Malaysia, Myanmar, New Zealand, the Philippines, Thailand and the US.