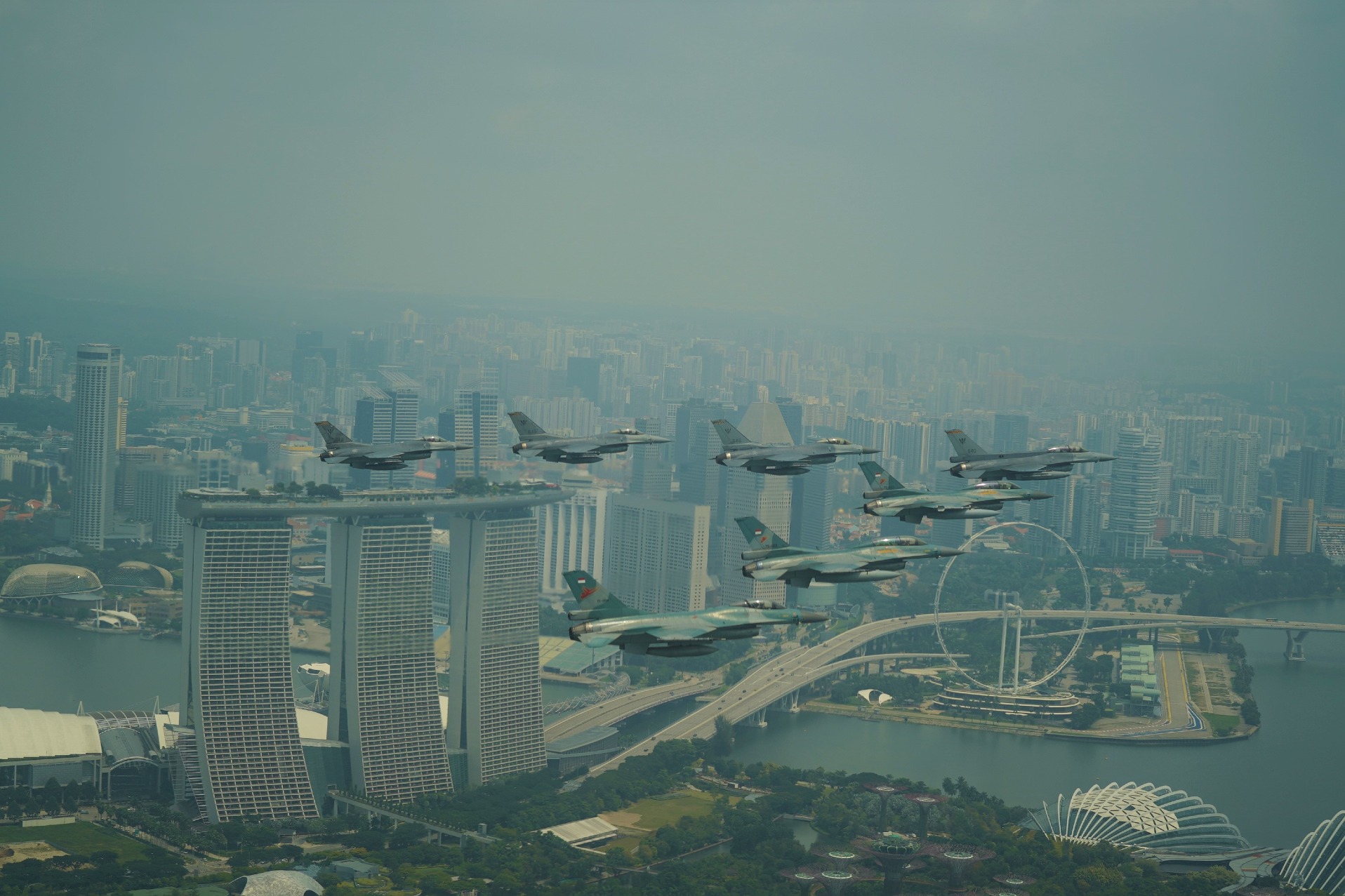 The RSAF and TNI AU's F-16 aircraft flying in formation over Barelang Bridge in Batam. The RSAF and TNI AU’s F-16 aircraft flying together as part of Exercise Elang Indopura 2021.

The Republic of Singapore Air Force (RSAF) and the Indonesian Air Force (TNI AU) commemorated 40 years of defence relations today. Chief of Air Force Major-General (MG) Kelvin Khong and Chief of Staff of the TNI AU Air Chief Marshal (ACM) Fadjar Prasetyo co-officiated at the commemoration ceremony held via video conferencing. During the commemoration ceremony, MG Khong and ACM Fadjar signed a Joint Declaration on Close Friendship and Cooperation. The Joint Declaration reaffirms the commitment of both air forces to enhance mutually beneficial cooperation and deepen relations through initiatives such as the conduct of joint exercises, leadership and professional exchanges, and mutual subscription of professional training courses. MG Khong and ACM Fadjar also participated in a joint formation flying event and exchanged pleasantries when they "met-in-the-air" earlier today. The joint formation flying involved seven F-16 aircraft from both air forces and took place over the Marina South area in Singapore and the Barelang Bridge in Batam, Indonesia.

The 40th anniversary commemoration ceremony was held in conjunction with Exercise Elang Indopura (XEI) which is the pinnacle bilateral exercise between both air forces. This year marks the 21st edition of the biennial bilateral exercise since it started in 1980. The exercise comprises two phases: an Exercise Planning Conference held virtually on 23 August 2021, and an Air Manoeuvring Exercise from 11 to 14 October 2021. More than 130 personnel from both air forces are participating in the contactless exercise, along with a total of 12 F-16 fighter aircraft. The conduct of XEI, amidst COVID-19, reflects the professionalism of the airmen and women from both sides, and the commitment by both air forces to enhance cooperation and continue interactions.

Reaffirming the strong bilateral ties between the RSAF and TNI AU, MG Khong said, "Exercise [Elang Indopura] has come a long way since it began in 1980, and it continues to provide invaluable opportunities for our airmen to interact and to learn from each other. I am especially pleased to meet Pak Fadjar today in the air earlier, and to take part in the flypast together. It is something very different from the virtual meetings that we are so used to these days, and it was a very memorable experience for me. The planning and coordination for the exercise, including this morning's flypast, were all done through virtual meetings due to the pandemic. Despite the restrictions, the exercise continues to be conducted safely and successfully. This bears testament to the interoperability and mutual understanding that we have established over the years."

Agreeing with MG Khong, ACM Fadjar added, "We testify that over the last four decades, both air forces have enjoyed much successful and fruitful cooperation, such as joint-exercises, education programs, professional exchanges, and dialogues. Even amidst the Covid-19 pandemic, our air forces continue to seek new methods and new approaches to maintain the solid connection between air forces. Thus, it becomes the utmost commitment of the Indonesian Air Force, to put the Republic of Singapore Air Force as our strategic partner in the region, to further maintain its stability and prosperity for many years to come."

Exercise Elang Indopura serves as an excellent platform to enhance the professionalism and cooperation between the two air forces. It underscores the close and long-standing bilateral defence relations between Singapore and Indonesia. Apart from Exercise Elang Indopura, the two air forces also regularly engage in a wide range of exercises and activities such as visits, professional exchanges and cross-attendance of courses which foster mutual understanding.