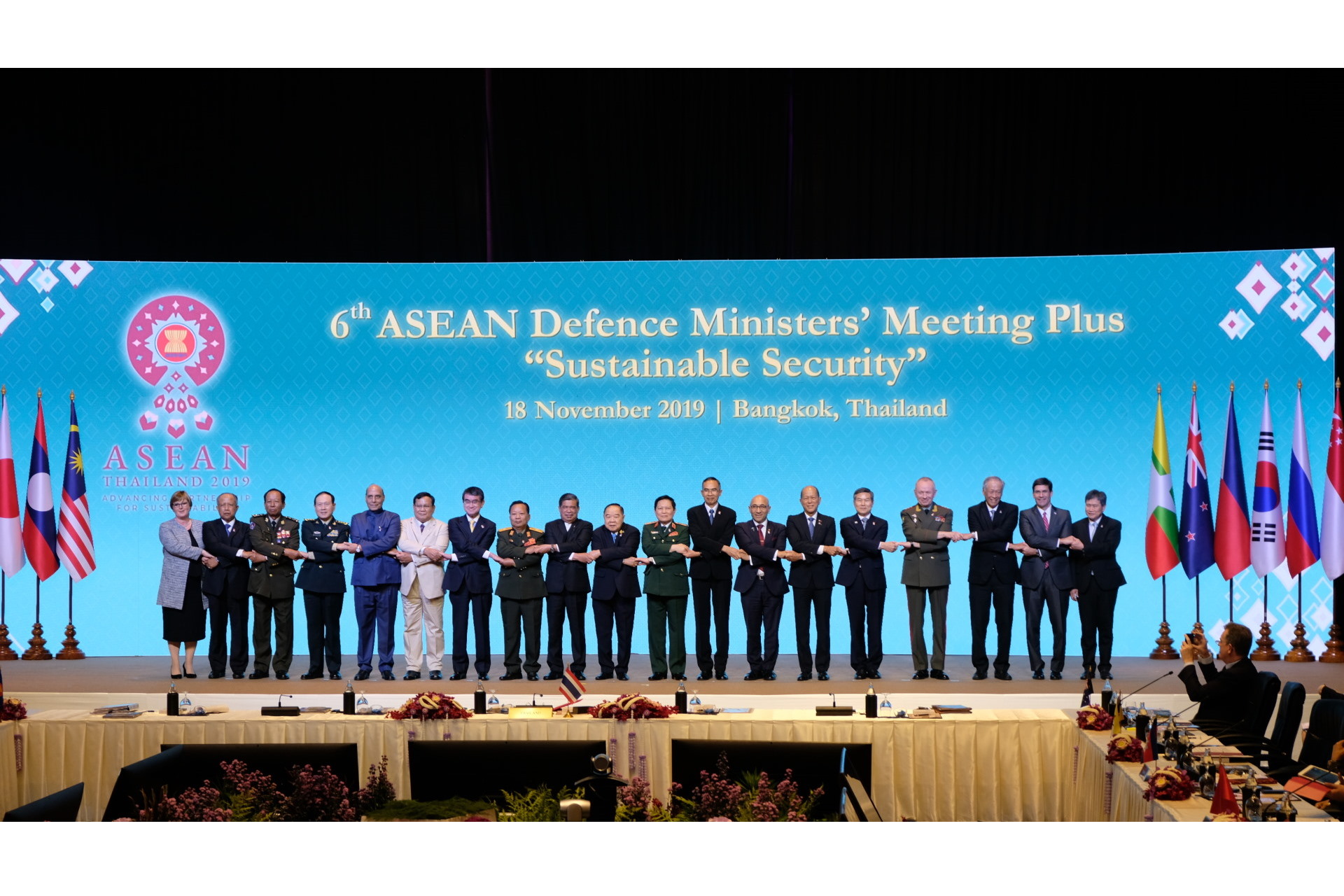 Minister for Defence, Dr Ng Eng Hen (third from right) at the 6th ADMM-Plus meeting with ministers from ASEAN and Australia, China, India, Japan, New Zealand, the Republic of Korea, Russia and the United States. Dr Ng met Australian Minister for Defence Linda Reynolds on the sidelines of the ADMM Retreat and 6th ADMM-Plus yesterday. 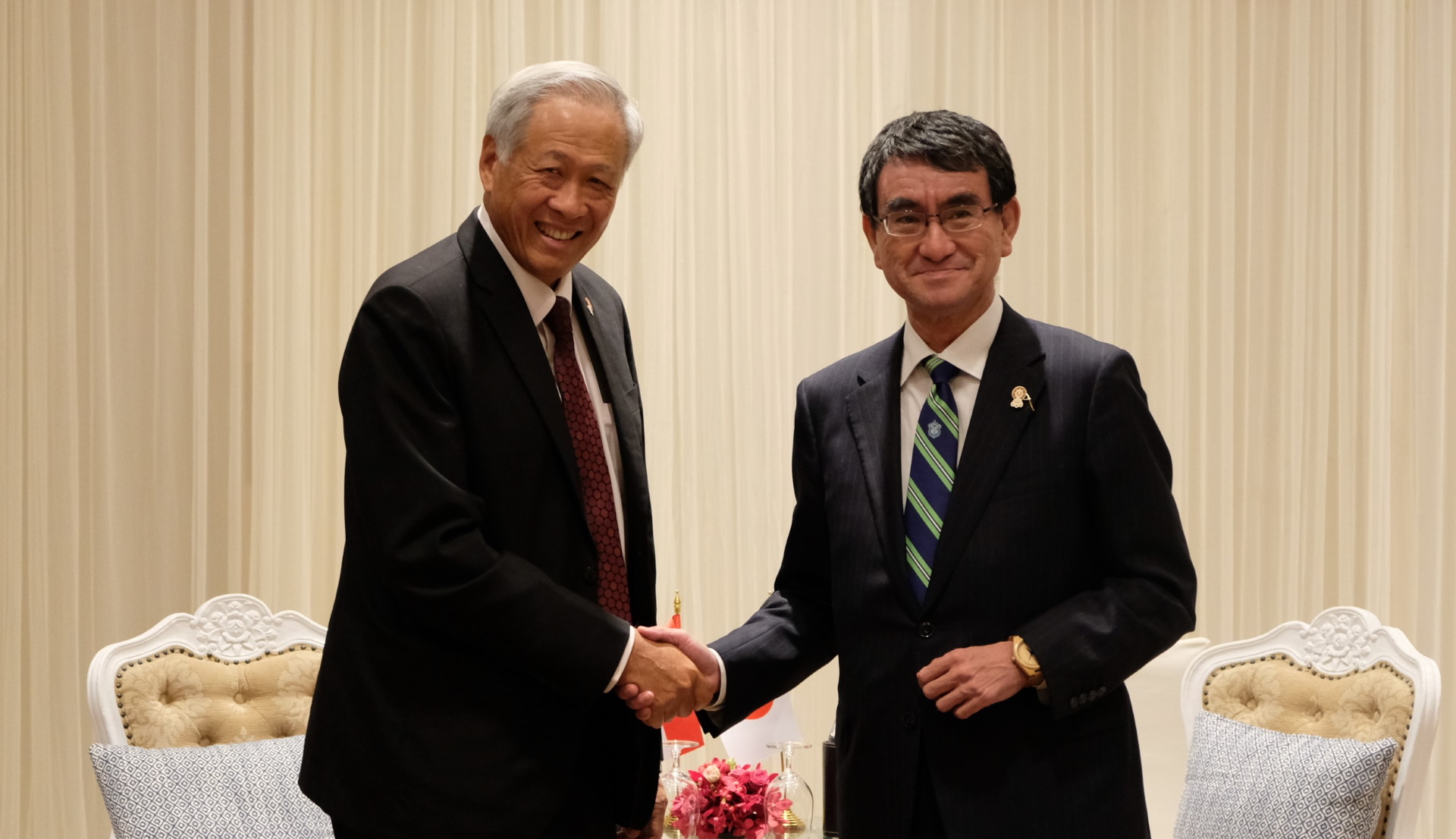 Dr Ng met Japanese Minister for Defence Taro Kono on the sidelines of the ADMM Retreat and 6th ADMM-Plus yesterday.

During the 6th ADMM-Plus, the ADMM-Plus Defence Ministers exchanged views on the regional and international security environment. The defence ministers acknowledged the complex security landscape and suggested deeper collaboration to address common security challenges, including on issues such as counter-terrorism, maritime security, and cyber security. The ADMM-Plus Ministers also adopted a Joint Statement on Advancing Partnership for Sustainable Security, which reaffirms the ADMM-Plus' commitment towards regional peace, security, and stability.

Outlining the foundation for continued cooperation and dialogue, Dr Ng said that it was important to build confidence between the ASEAN and Plus countries. Citing the ASEAN-US maritime exercise and ASEAN-China maritime exercise, he explained that "we have to know each other despite the differences, (and) find ways to build confidence if not trust. We have been pushing for multilateral exercises and indeed, we have been doing 18-nation exercises in counter-terrorism… You are not going to solve these differences without communication."

During the ADMM Retreat yesterday, the ASEAN Defence Ministers discussed the ADMM's progress since its establishment. The defence ministers acknowledged the increasing complexity of challenges in our region and the need for ASEAN's actions to be relevant and effective in dealing with such challenges. Ministers also emphasised ASEAN centrality, underscoring the need for ASEAN to be an honest broker between large powers, a group that respects international law and that promotes an open and inclusive security architecture through the ADMM-Plus.

On 17 November 2019, Dr Ng met Australian Minister of Defence Linda Reynolds to reaffirm the close and longstanding bilateral defence relationship. Both countries welcomed the good progress under the bilateral Comprehensive Strategic Partnership as well as Australia's commitment to ASEAN. Minister Reynolds was appointed in May, and attending her first ADMM-Plus.

On 17 November 2019, Dr Ng also had his first meeting with Indonesian Defence Minister Prabowo Subianto on the sidelines of the ADMM Retreat and 6th ADMM-Plus to reaffirm Singapore-Indonesia bilateral relations. Singapore and Indonesia share a longstanding mutually-beneficial bilateral relationship, of which defence is a key component. This is Minister Prabowo's first attendance at the ADMM Retreat and ADMM-Plus following his appointment last month.