The Singapore Armed Forces (SAF)'s command team, led by RADM Saw Shi Tat from the RSN, will lead and coordinate CTF 151's counter-piracy efforts in the Gulf of Aden over the next three months. It will also coordinate counter-piracy operations with the European Union Naval Force, as well as with other navies operating in the Gulf of Aden. The SAF command team comprises 53 SAF personnel and 11 international officers from Australia, Bahrain, Brazil, Brunei, Indonesia, Japan, Republic of Korea, New Zealand, Saudi Arabia, Thailand and the United Kingdom.

Speaking at the Change of Command ceremony, RADM Saw reiterated Singapore's commitment to contributing to international counter-piracy efforts. He said, "As a maritime nation, Singapore’s economic lifeline and success are inextricably linked to the security and uninhibited flow of seaborne trade, making it essential for Singapore to contribute towards safeguarding these shipping lanes." When highlighting on the composition of the team, RADM Saw added, "It is my privilege to serve with a team of staff from 12 countries, and the diversity and varied expertise which our multinational staff collectively bring to the table will be the key strength of our team."

This year's deployment marks the fifth time that the SAF will be leading CTF 151, and the 11th SAF deployment to the multinational anti-piracy efforts in the Gulf of Aden. Since the start of the SAF's contribution to CTF 151 in 2009, Singapore has deployed over 1,400 servicemen and women, five ships and one maritime patrol aircraft, spanning across the deployment of four SAF command teams, five task groups and one air detachment. 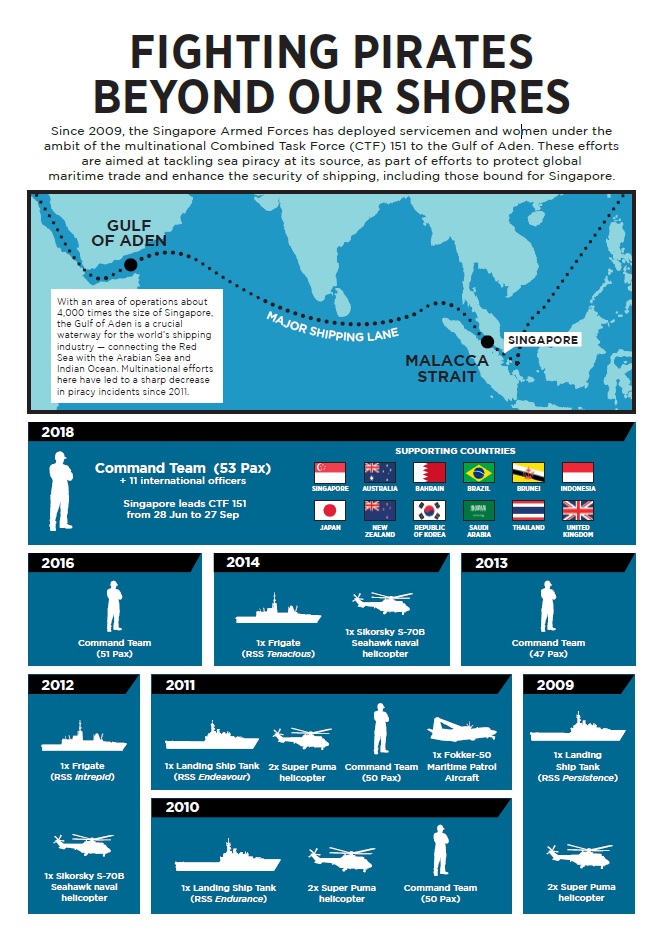