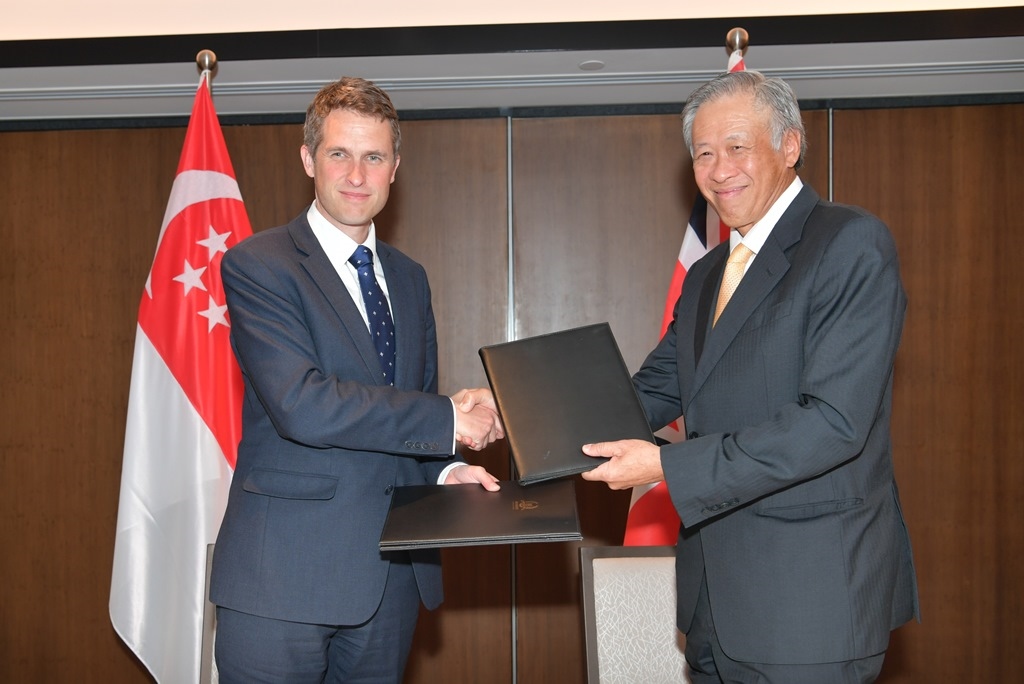 Minister for Defence Dr Ng Eng Hen and United Kingdom (UK) Secretary of State for Defence Gavin Williamson signed a Defence Cooperation Memorandum of Understanding (DCMOU) between Singapore and the UK today, on the sidelines of the 17th Shangri-La Dialogue (SLD). The DCMOU aims to encapsulate the existing defence relationship and areas of cooperation between the two countries, as well as provide a foundation for future defence cooperation in more specific areas.

Speaking to the media after the signing, Dr Ng highlighted the warm and long-standing bilateral defence relationship between Singapore and the UK. He also emphasised the importance of engaging capable partners to build a stake in the region, for regional security and stability. "The Five Power Defence Arrangements (FPDA) in 1971 was the originator of multilateralism in this region. The UK's commitment to the security in this region has been continuing… the world has moved on since 1971. There are new security challenges and we welcome, with this MOU, working with the UK on our various security challenges together in mutually beneficial ways," he said. Agreeing, Mr Williamson said that the MOU also demonstrated a joint ambition for both countries' defence relationship by outlining what a future partnership looked like. "A partnership based first on cooperation across a broad range of areas, from cyber and non-conventional warfare, to counter-terrorism and counter-improvised explosive device, as well as maritime security and disaster relief," he added.

During their meeting prior to the signing, Dr Ng and Mr Williamson discussed a wide range of geopolitical developments, including the FPDA and the UK's plans to step up defence engagements in the Asia-Pacific.

Mr Williamson is visiting Singapore from 1 to 3 June 2018 to attend the 17th SLD. This is Mr Williamson's inaugural visit to Singapore as the UK Secretary of State for Defence. As part of his programme, Mr Williamson called on Prime Minister Lee Hsien Loong earlier today. He also met the FPDA Defence Ministers at an informal breakfast hosted by Dr Ng.