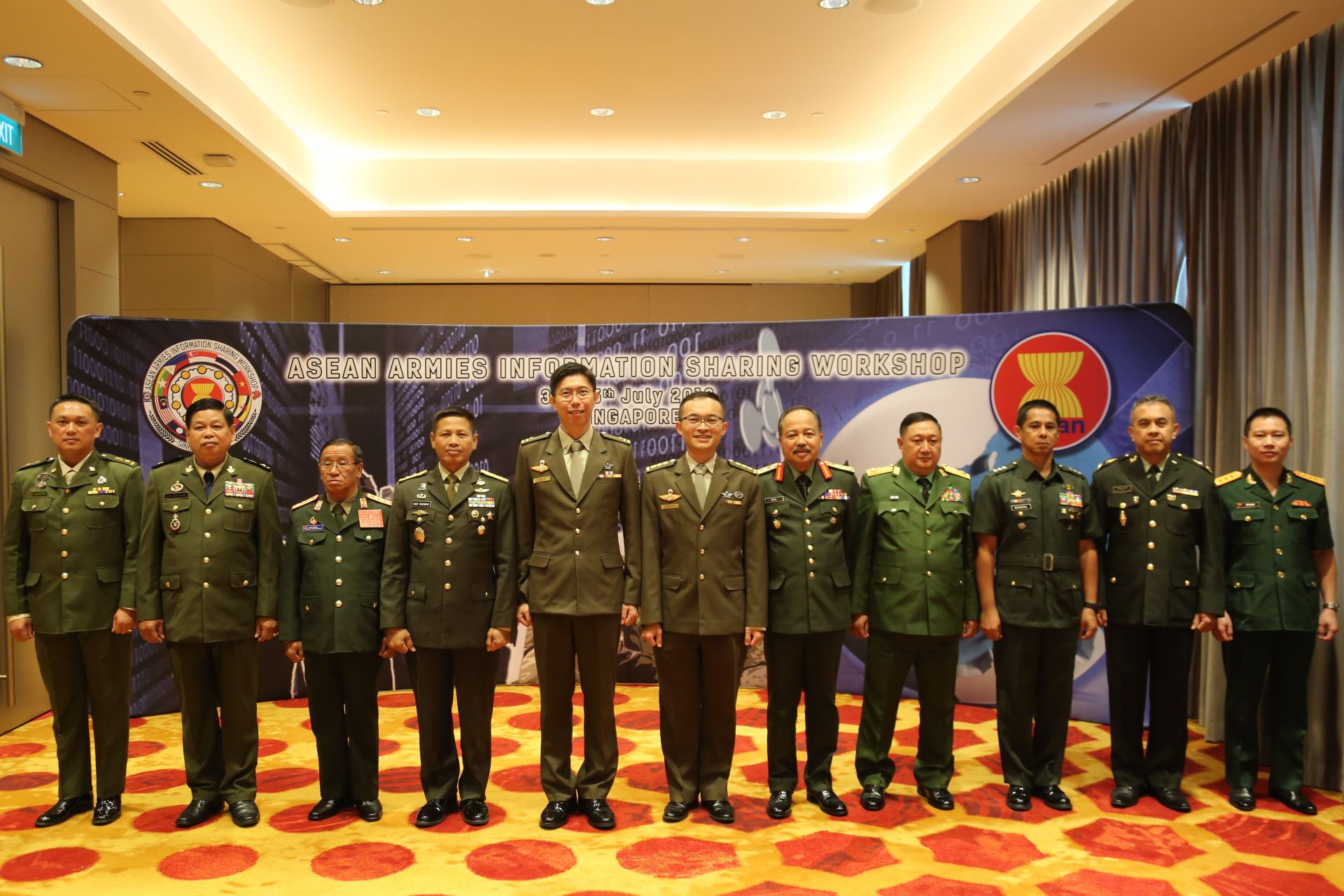 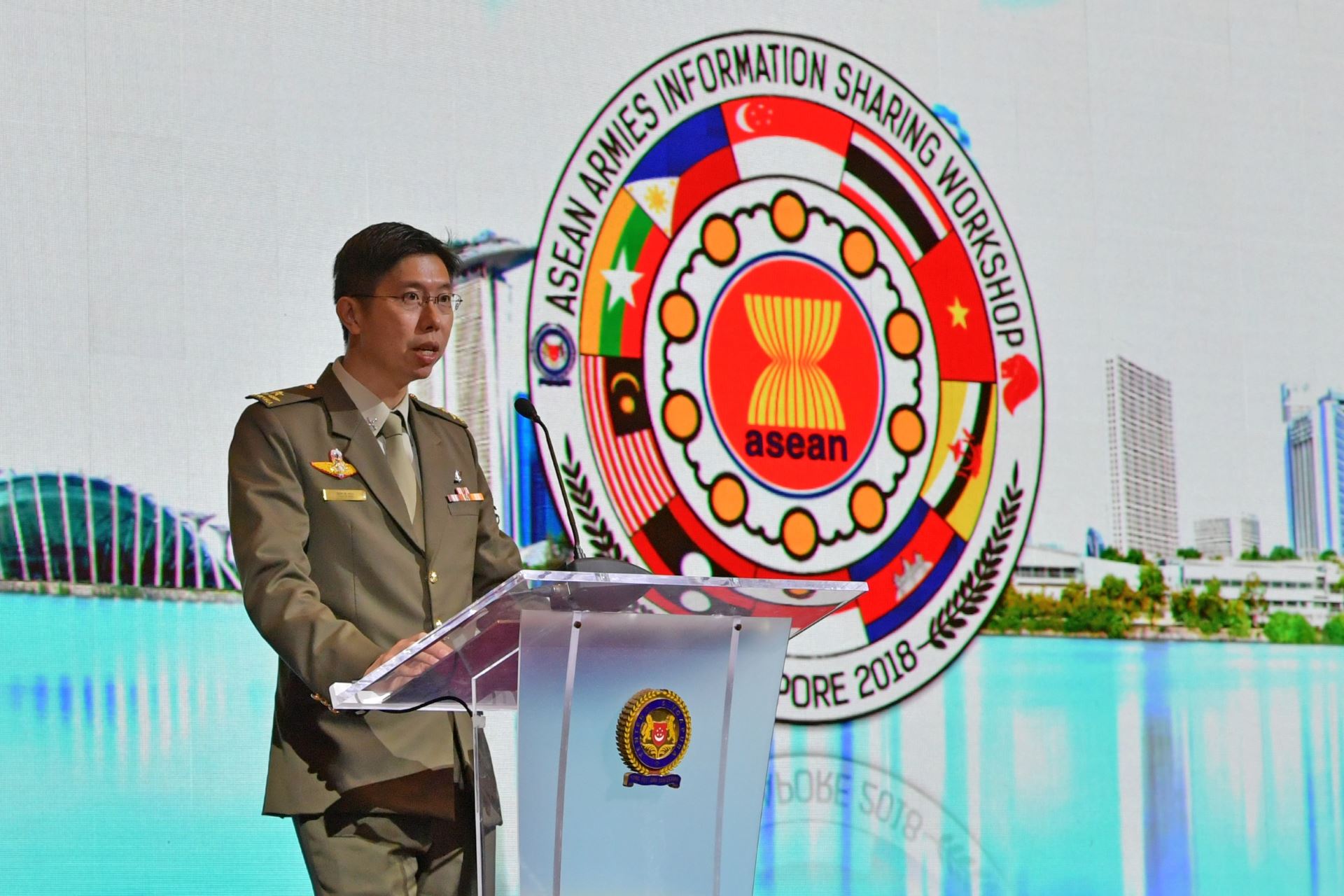 BG Goh delivering his keynote address at the opening ceremony of the AAISW. 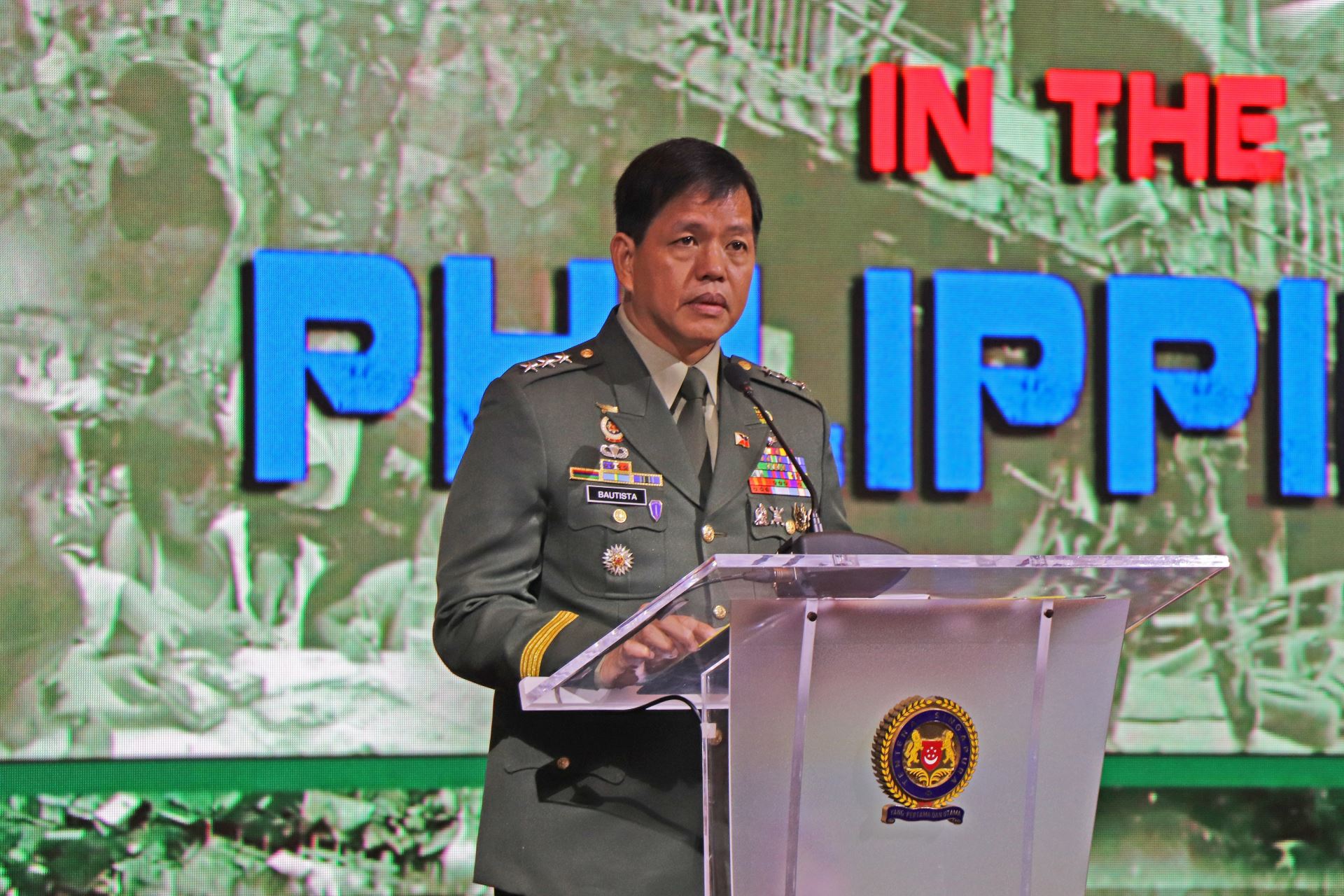 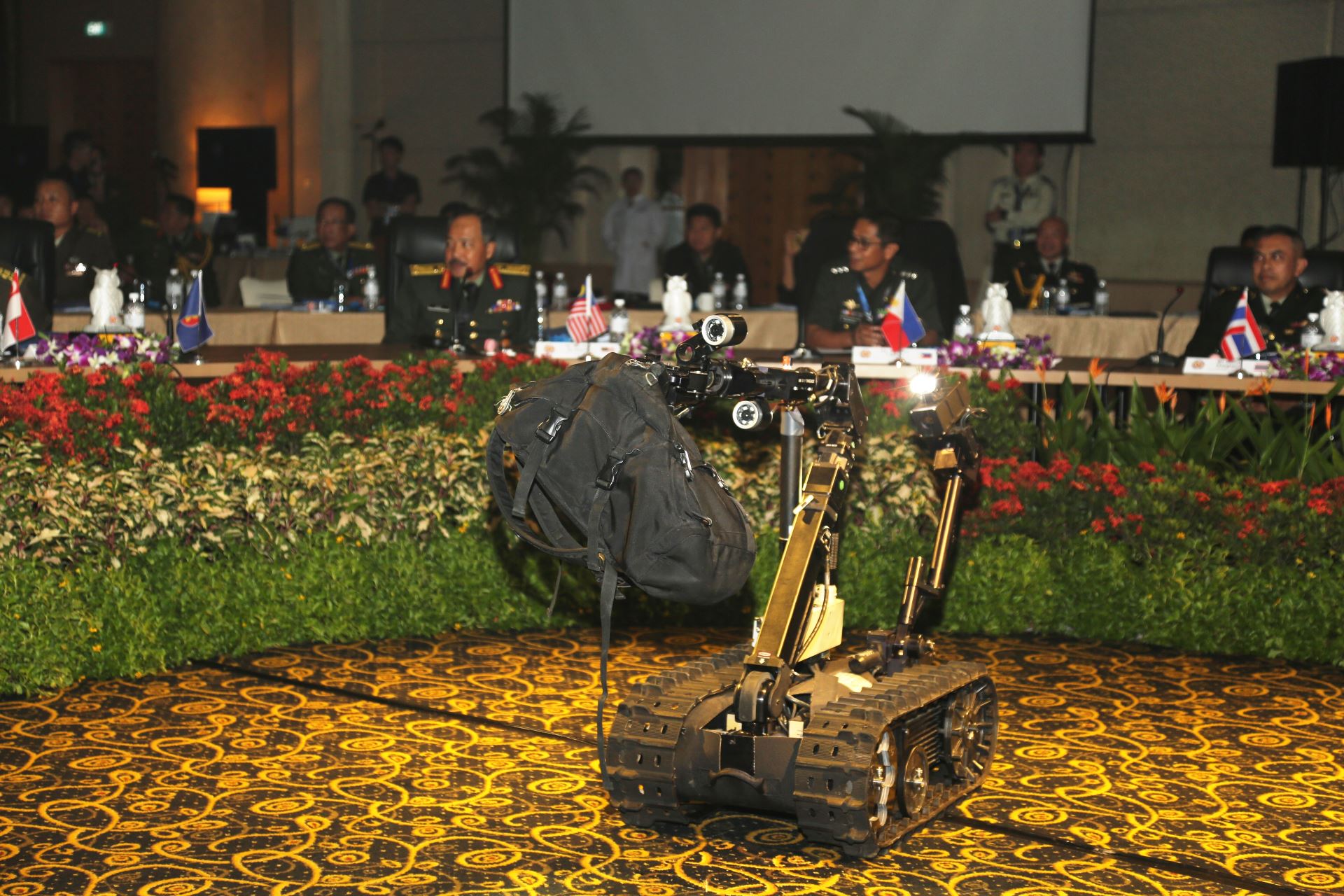 A Talon Unmanned Ground Vehicle removes a suspicious bag for containment in a demonstration by the Singapore Army’s Chemical, Biological, Radiological and Explosives (CBRE) Defence Group. 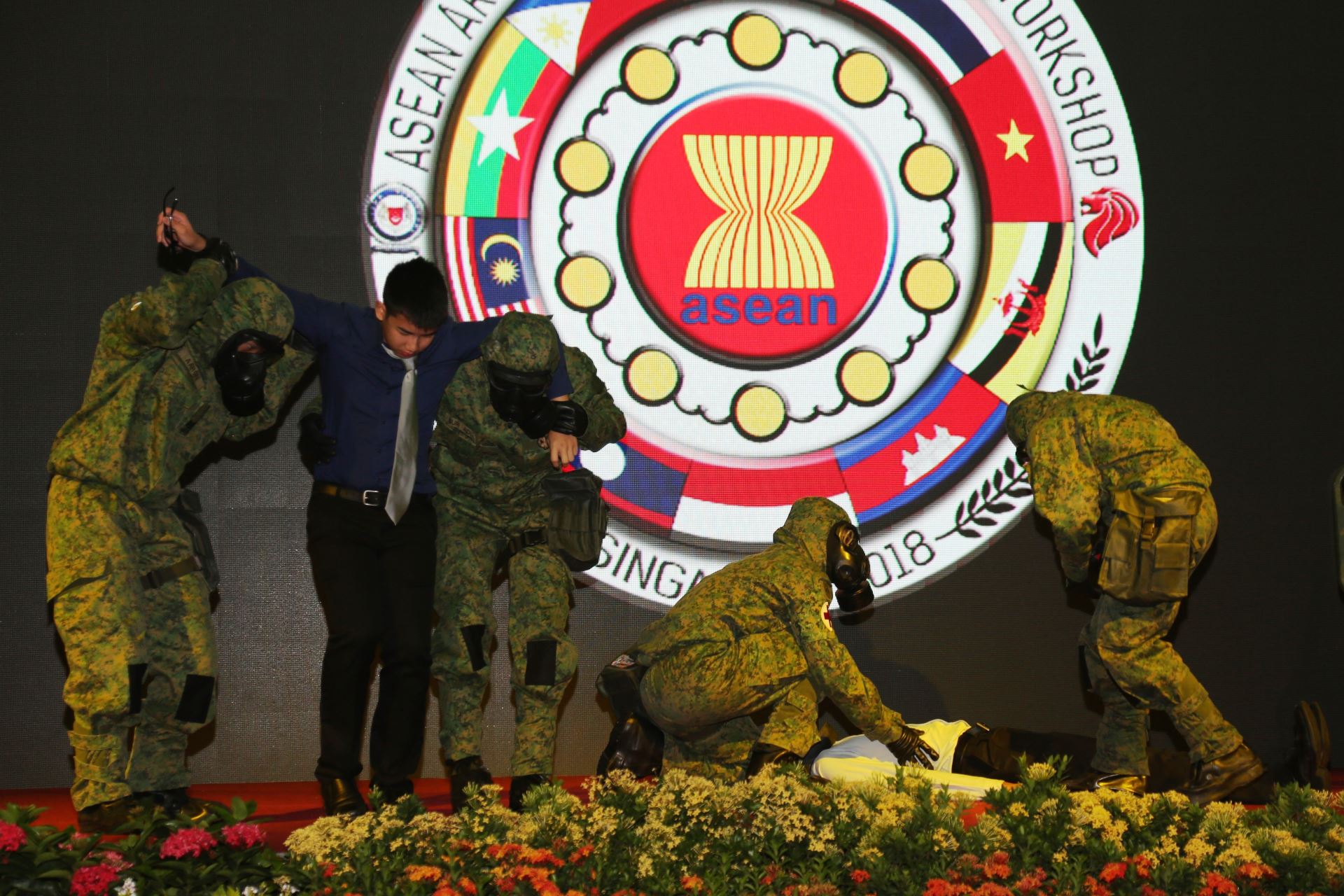 Members of the Singapore Army’s Medical Response Force rendering assistance to victims of a "terrorist attack" as part of a CBRE demonstration at the inaugural AAISW.

The Singapore Army is hosting the inaugural ASEAN Armies Information Sharing Workshop (AAISW) from 3 to 5 July 2018. The theme for this year's AAISW is "Strengthening Cooperation against Regional Terrorism and Chemical, Biological, and Radiological (CBR) Threats". This is in line with Singapore's chairmanship of the ASEAN Defence Ministers Meeting (ADMM) to promote regional counter-terrorism (CT) collaboration and build collective defence capabilities against CBR threats in the region. Over 100 delegates comprising ASEAN Army Intelligence Chiefs, military delegates, and experts on terrorism and CBR threats, as well as officers from the Home Team, were in attendance at the opening ceremony held at the Grand Copthorne Waterfront Hotel this morning.

In his keynote address at the opening ceremony, Chief of Army Brigadier-General (BG) Goh Si Hou underscored the importance of cooperation between ASEAN Armies to combat the threat of terrorism and reiterated how the Resilience-Response-Recovery framework could be used to strengthen our collective efforts in combating terrorism and CBR threats in our region. Highlighting the significance of the inaugural workshop, BG Goh emphasised that the ASEAN Armies must continue and find new ways to enhance ASEAN's collective response to terror and CBR threats.

The inaugural workshop consisted of two plenary sessions and a roundtable discussion. As the distinguished speaker for the first plenary session, Commanding General of the Philippine Army, Lieutenant-General (LTGEN) Rolando Joselito Delizo Bautista provided a first-hand account of the lessons learnt by the Philippine Army from the Marawi conflict. Sharing his thoughts at the AAISW, LTGEN Bautista acknowledged the importance of enhancing partnership amongst the ten ASEAN Armies. At the second plenary session, Dr Jolene Jerard from the S. Rajaratnam School of International Studies (RSIS) and Dr Loke Weng Keong from the DSO National Laboratories highlighted recent trends in terrorism as well as emerging CBR threats in the region.

At the roundtable discussion, the ASEAN Armies Intelligence Chiefs shared their commitment to regional peace, security and stability. Singapore's Assistant Chief of the General Staff (Intelligence) Colonel Edward Chen shared, "The discussions were rich and meaningful, paving the way for further cooperation in the region. I am honoured to be part of this pioneering effort in the region to build up the region's early warning capabilities against terrorism and CBR threats."

To round up the sharing, the delegates witnessed a demonstration of the SAF's range of CT and Chemical, Biological, Radiological and Explosives (CBRE) capabilities, involving elements from the CBRE Defence Group, Special Operations Task Force, and Medical Response Force. This provided an opportunity for the participants to deepen their understanding of the Singapore Armed Forces' capabilities in responding to terror and CBR threats.

The AAISW is one of the key initiatives declared at the 18th ASEAN Chiefs of Army Multilateral Meeting last year. To be held annually, the AAISW serves as an important platform for the ASEAN Armies to share information and engender practical cooperation in areas of common interests.