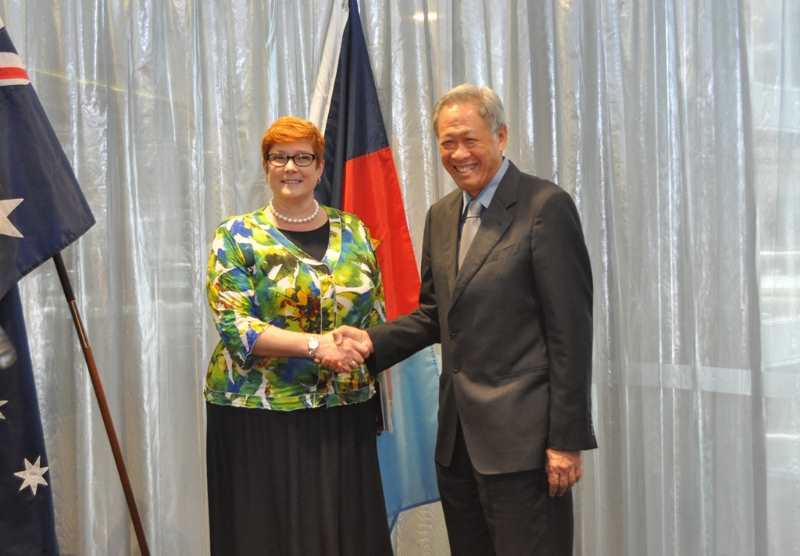 Dr Ng and Ms Payne in a discussion, together with other Singaporean and Australian officials.

During the meeting, Dr Ng and Ms Payne reaffirmed both sides' commitment to strengthen the bilateral defence relationship under the Singapore-Australia Comprehensive Strategic Partnership (CSP), and to conclude new initiatives in five areas of defence cooperation, namely (a) increased access to, and enhancement of, training areas; (b) new military and civilian exchanges and postings; (c) greater collaboration in areas such as counter-terrorism; (d) greater information-sharing in areas of common interest; and (e) new initiatives under the recently renewed Memorandum of Understanding for Cooperation in Defence Science and Technology.

Dr Ng and Ms Payne also discussed regional and international security issues, which highlighted the convergence of strategic interests and perspectives between both countries. Both Ministers recognised that information-sharing plays a key role in the fight against extremist terrorism and our ability to protect civilians in our home countries. Dr Ng and Ms Payne agreed to step up intelligence cooperation between Singapore, Australia and neighbouring countries.

Dr Ng is in Australia for a working visit from 19 to 21 November 2015, and will be visiting the Singapore Armed Forces (SAF) troops participating in Exercise Wallaby 2015 at the Shoalwater Bay Training Area (SWBTA) tomorrow. This year's exercise, which is the 25th year of the SAF's training in SWBTA, is conducted from 28 September to 25 November 2015.