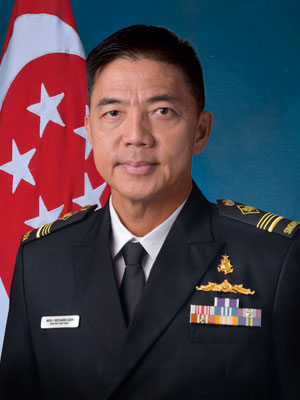 Military Expert 6 (ME6) Richard Goh was enlisted into the Singapore Armed Forces (SAF) in June 1980. ME6 Goh started his career in the Republic of Singapore Navy (RSN) as a Radar Plotter and had served on board the Minesweeper, Coastal Patrol Craft, Landing Ship Tank and Patrol Craft, and staff appointment in Headquarters (HQ) RSN between 1980 to 1990.

After his staff tour in HQ RSN, ME6 Goh was streamed to be a Command and Control (C2) System Operator and served on board the RSN Missile Corvette, RSS Vengeance as a Pioneer Crew. ME6 Goh continued his career as a C2 System Expert.

He was awarded the Efficiency Medal in 1996, the SAF Long Service and Good Conduct Medal in 2005, and the SAF Overseas Service Medal – Gulf of Aden in 2011.

He is happily married to Carol Yew and they have two children, Jonathan and Jocelyn.