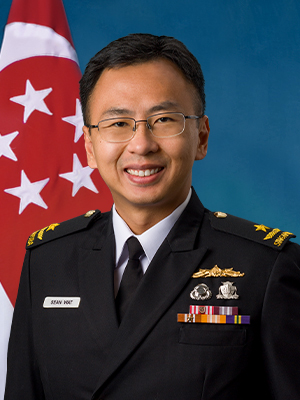 RADM Beng spent his formative years in the Republic of Singapore Navy (RSN) aboard theVictory-class missile corvettes and thereafter the Formidable-class frigates. He assumed command of the frigate RSS Intrepid from 2013 to 2014 and he led the ship to a successful deployment to Exercise RIMPAC 2014. RADM Beng commanded the Formidable-class frigate squadron from June 2016 to June 2017. RADM Beng also served as Fleet Commander of the RSN.

Ashore, RADM Beng was Director of the Defence Policy Office at the Ministry of Defence. In this role, he oversaw the foreign interactions and defence policy of the Ministry of Defence and the SAF. This included Singapore’s chairmanship of the ASEAN Defence Ministers Meeting (ADMM) and ADMM-Plus in 2018. RADM Beng was also Head, RSN Strategy Office between December 2014 and June 2016, where he led the long-term and strategic planning for the Navy. Immediately prior to his current appointment, he was Chief of Staff – Naval Staff.

RADM Beng is happily married to Sharon Koh and they have two children.