BACK
Highlights From Singapore Airshow 2020!
Community

Singapore Airshow 2020 successfully concluded on Sunday, 16 Feb 2020! Over the six-day event this year, the RSAF participated with static and aerial displays that wowed all who joined us, whether physically or through live streams on the RSAF Facebook Page. Chairman of the RSAF Sub-Committee, SLTC Damian Chee said, "The RSAF is honoured to be a participant at the Singapore Airshow 2020. The Airshow is an important event for the public to get a better understanding of the RSAF. It also provides an excellent opportunity for our airmen and women to engage our fellow Singaporeans, to allow them to gain a deeper understanding of what the RSAF does every day for the defence of Singapore." The F-15SG releasing flares during the aerial display!

Of note was our integrated aerial display comprising one F-15SG fighter aircraft and a pair of AH-64D Apache attack helicopters, a first-time combination that showcased the F-15SG’s agility and the Apaches’ versatility. Chairman of the RSAF Flying Display Committee, SLTC Mark Tan said, "Since October 2019, the team has put in a lot of time and effort to develop a thrilling aerial sequence for the audience. It has been fine-tuned to precision through highly coordinated flying skills and teamwork. Our team of aircrew and ground crew have worked hard and we look forward to excite the crowds at SA2020 with our integrated aerial display. I am confident that the public will enjoy the performance that the RSAF team has put up for them." The Apaches entering show centre for the aerial display.

Ten of the RSAF’s assets were also put on static display, comprising one A330 Multi-Role Tanker Transport; two F-15SGs; one F-16C; one F-16D+; one Aster 30 Ground Based Air Defence System; one Hermes 450 Unmanned Aerial Vehicle; one Heron 1 Unmanned Aerial Vehicle; one Apache attack helicopter; and one S-70B Seahawk Naval Helicopter. Speaking of the challenges of setting up the static display, ME4 Ong Chin Kuan, Static Display Lead for Singapore Airshow 2020, said, “The greatest challenge was to move the MRTT over. This is the first time moving such a big aircraft over to the static display area. Multiple recce trips were performed and measurements were made to ensure that the aircraft was able to fit into the static display site. We made sure that everyone was familiar with the plan and all obstacles en-route were removed to make sure that the aircraft was able to come into the static display area safely.”

Check out some cool shots from the Singapore Airshow 2020! 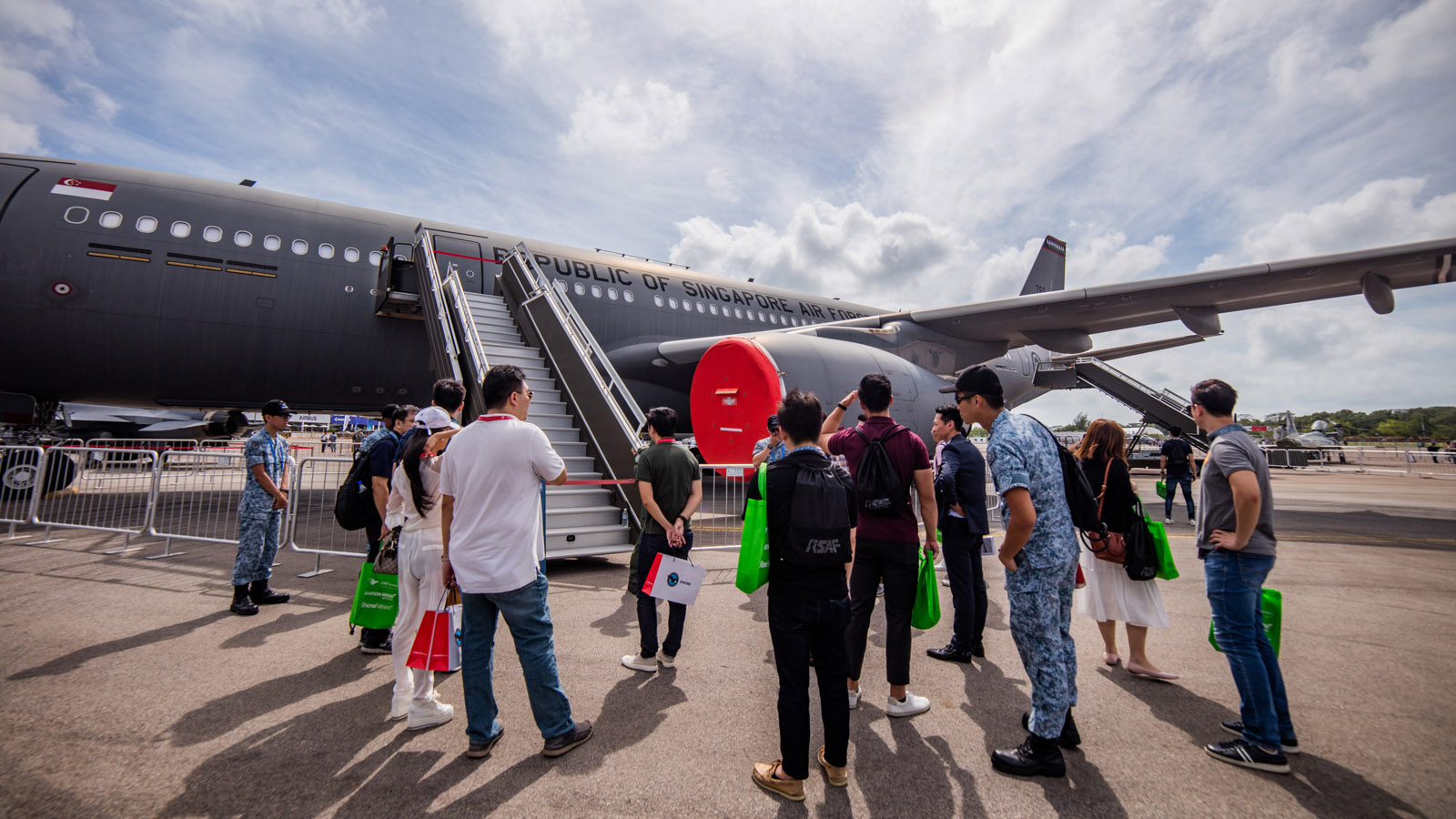 A young visitor being awed by the aerial display! Our young visitor, Annakyn Wu, displaying cards she made for our RSAF airmen and women. Thank you Annakyn, we love you! A young visitor learning about our Apache attack helicopter! Thank you to all who dropped by our RSAF booth!