BACK
Reaching For The Stars - ME6 David Bey
People

ME6 David Bey, who has been an Air Force Engineer in the RSAF since 2002, shares about his RSAF career, his experience in the U.S. Air Command And Staff College, and some words of advice for young and aspiring airmen and women.

One of the most memorable periods of my career came when I was in 143 Squadron. Being an operational squadron, the duties and workload banded everyone together to accomplish our tasks with the highest standards. Due to the diverse culture and personalities, we had to put aside our personal and vocational differences to balance work and family commitment in order to answer the nation’s calling together – the AFEs would take extra care of the jets because we wanted the aircrew would return home safely. We also coined ourselves as the “World’s Best Fighter Squadron” and that WBFS vision had stuck with the squadron since then. In the same period, I also got the opportunity to simultaneously command the logistics element of the RSAF Black Knights. It was really hectic, like managing two squadrons at the same time! My wife would always find me asleep on the couch after I sat down to rest. But it was also very rewarding – the ground crew were specially selected for their excellent attitude, and the Black Knights patch and coveralls became a mark of distinction.

The other memorable periods of my career occurred when I was given a chance to study overseas – first in the UK for a Systems Engineering masters course, and then in the US for the Air Command and Staff College. Having never lived overseas before, each stay really opened my eyes to many issues around the world, such as racial and cultural differences, and how there is often no better place than home, especially when it comes to Singapore’s efficiency for seemingly trivial things like applying for a bank account, paying for road tax or having bubble tea and good Chinese food readily available. Furthermore, both locations were “ulu” but it made us appreciate the outdoors a lot more. The experiences have really reshaped mine and my wife’s outlook on life. ME6 David Bey (back row, first from right) at an overseas detachment.

The U.S. Air Command and Staff College under the Air University is one of the world’s premier military academic institutions, especially for Air Forces. Founded in the same location in Montgomery, Alabama, where the Wright Brothers started a flying school, the college was first known as the Air Corps Tactical School (ACTS) and educated all the famous US air commanders that fought in World War II such as Gen Hap Arnold, and also developed the campaign plans for the air wars. The curriculum is unique in that a good portion of it is spent on understanding the immense potential of air power – as both a destructive force but also as a coercive tool. The course is also unique in that it has one of the largest cohorts of International Officers – this year, 75 International Officers from 68 countries participated. This level of international participation helps to build relationships and partnerships amongst the nations and also facilitates future coalition operations.

Each year, up to 2 RSAF officers are chosen to attend it. It is an awesome privilege to be chosen, especially since the AFE community has not been represented in ACSC for about 15 years. So, this spurred me on to work harder. 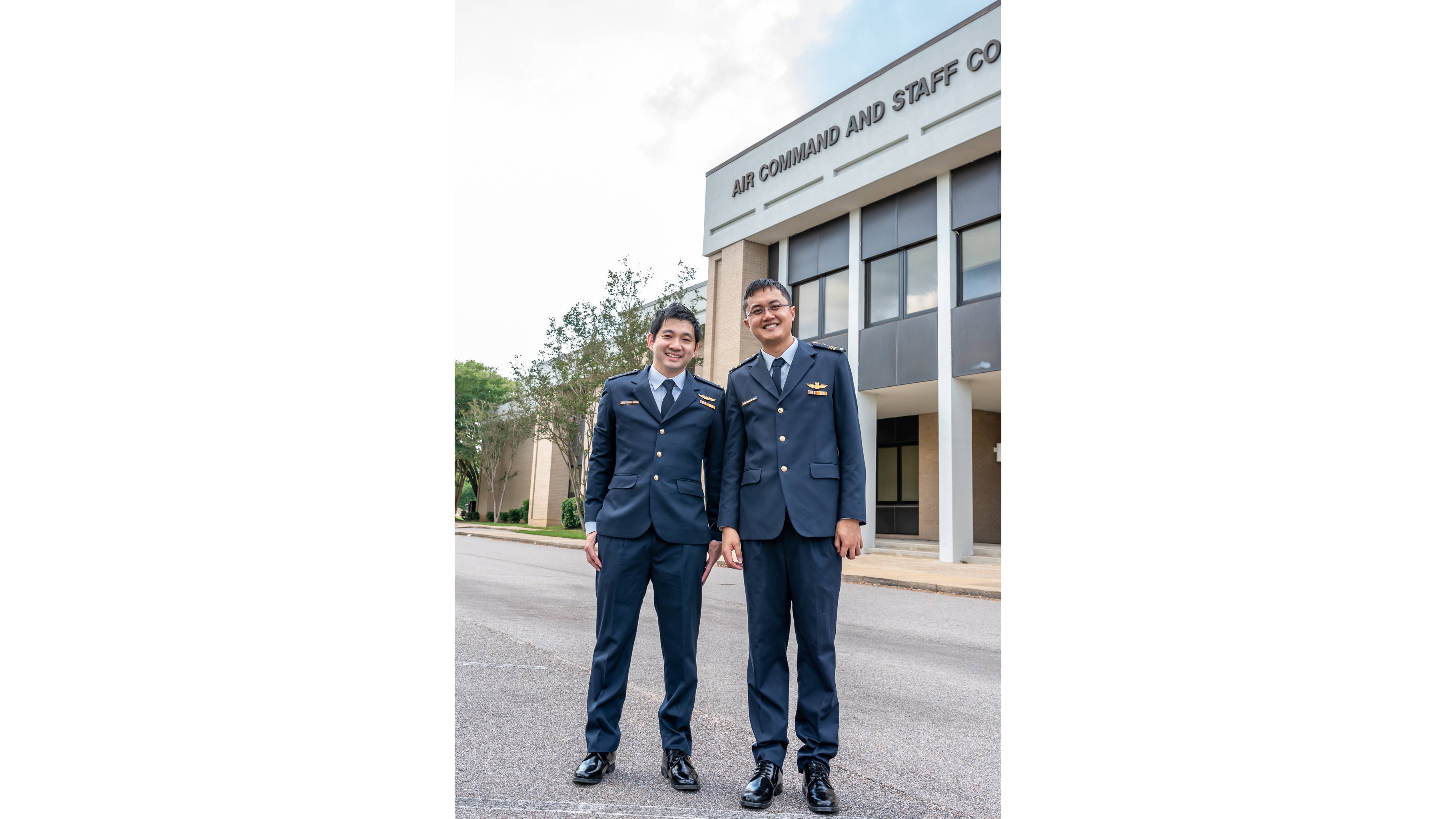 3.     Congratulations on your achievement! What was the award you’ve won and why is it significant?

I was fortunate to receive the Commandant’s Academic Award for International Officers, which is given to the International Officer with the best academic results (I had a perfect GPA of 4.0). I was lucky to have good instructors who helped me along in the course, as well as a great set of friends from Singapore, the US, the UK and Canada who were willing to use their own private family time to go through my work and help sharpen my essays. As they say, iron sharpens iron, and I was really fortunate to have these friends provide me with different perspectives.

It is also significant because RSAF officers have now won this award for 3 years in a row. One might say we are the biggest muggers, but it is also a reflection of the high standards and hard work expected of us in the RSAF.

4.     What would you attribute your success to?

I would definitely give credit to the bosses that I have previously worked with, that mentored me and gave me a chance. I had only average A level results and this only qualified me for a Local Study Award. I also graduated only with second-lower class honours. However, my superiors taught me and inspired me to work hard. In this regard, I have been extremely fortunate to work with a string of excellent bosses who provided me the opportunities to bloom later in life – first giving me the opportunity to further my engineering studies abroad in Cranfield University, UK, and then for a Masters in Operational Art and Science at the U.S. Air Command and Staff College. These leaders have taught and shown me that, with the right attitude and hard work, the RSAF will recognise your efforts and help develop you to reach your fullest potential. ME6 David Bey with his family and the Commandant’s International Officer Academic Award.

5.     What are some words of advice you would like to give to young airmen and women?

Never give up, keep an open mind and be ready to be surprised. Attitude over aptitude. Throughout my career, I have been thrown into positions and appointments that I initially felt were not the best places for myself – I had different goals and desires. However, the RSAF has continually surprised me and placed me in appointments out of my comfort zone, and the struggle to learn and adapt and perform at higher levels has only forged a greater spirit and confidence in myself. 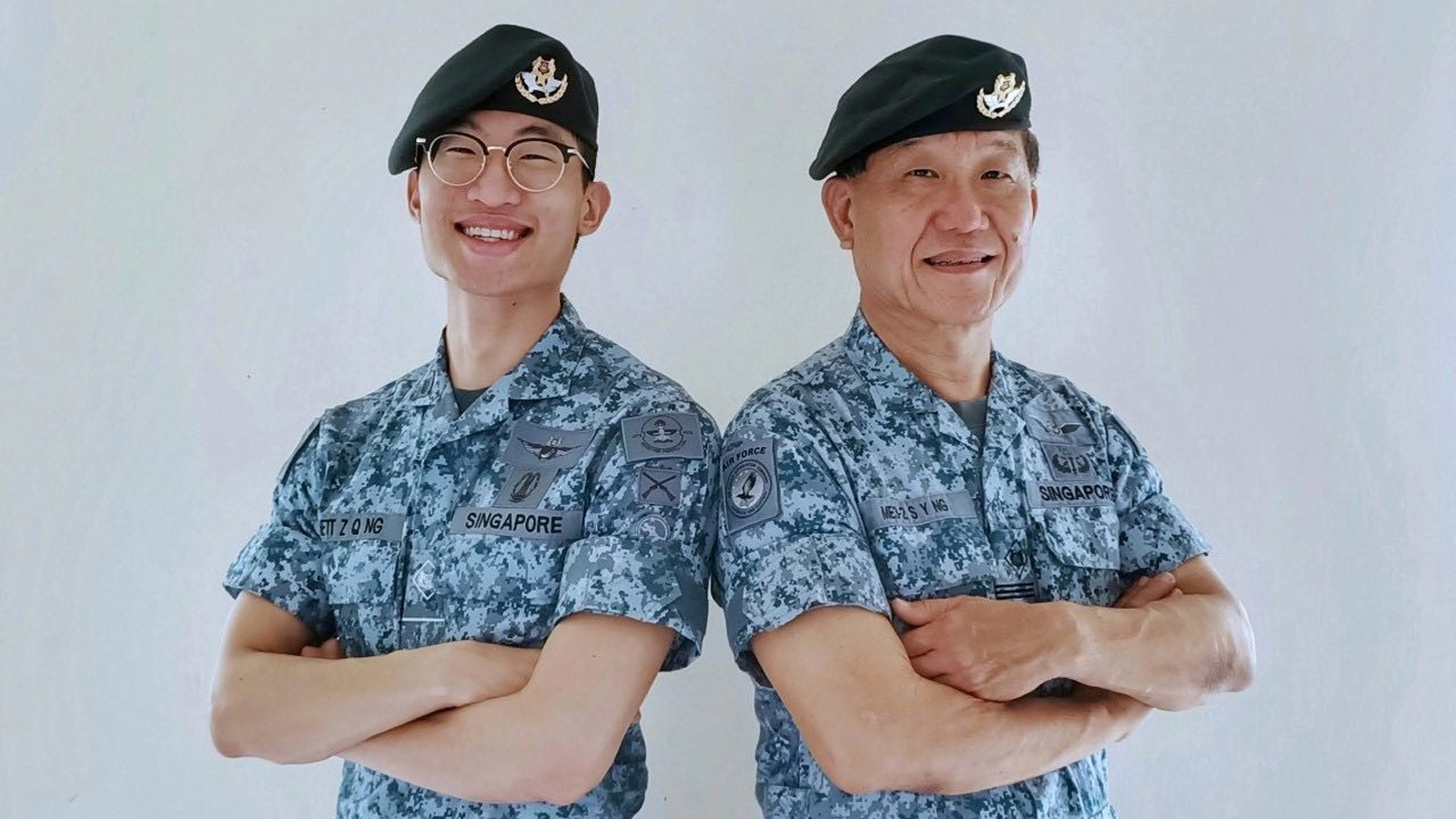