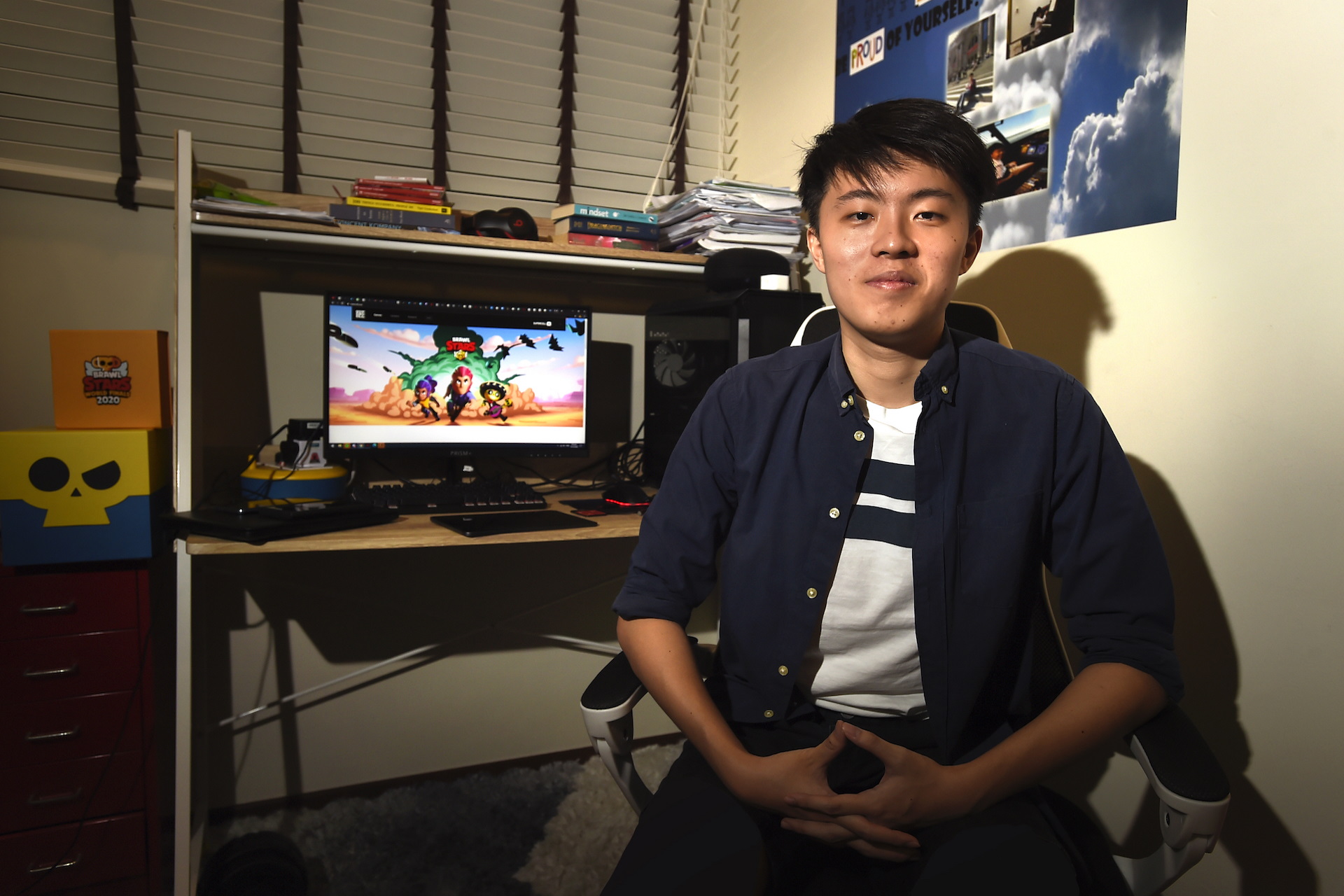 Private (PTE) (NS) Charleston Yeo, better known by his in-game name Scythe in the e-sports community, was part of the team that bagged the 2020 Brawl Stars Championship.

He was relatively new to the world of competitive Brawl Stars when he joined the mobile video game's regional qualifiers last year. Private (PTE)(NS) Charleston "Scythe" Yeo's team came in third, failing to qualify for the finals.

But his potential was spotted by his competition, Nicholas "CoupDeAce" Ng from the team that won the qualifiers, who invited him to form a new squad.

Together with Jerome "Response" Kwek, their team, Brawlers PSG e-sports - which was signed by French club PSG Esports this March - went on to win big at the Brawl Stars World Finals this November. They bagged a cool prize money of US$200,000 (about S$266,400).

PTE (NS) Yeo, who will study medicine at Monash University next year, served as a Transport Operator with 1st Transport Battalion.

The 20-year-old shares about his gaming training, NS memories, and whether a fancy set-up is needed for an e-sports champion:

I started playing Vain Glory casually in 2015. The more you play, the higher your rank, and I started playing against recognised players in the region. I was doing quite well so I took a shot at competitive playing.

But in 2017 I entered junior college and I wasn't good at managing my time - my results suffered a bit so I had to stop playing competitively.

It was still a good experience: I made many new friends and it opened my eyes to the e-sports scene.

2. This year's Brawl Stars World Finals was held entirely online due to COVID-19 - how did your team do it?

Our manager from PSG Esports, told us that Singtel would sponsor a gaming venue for us at SCAPE. So, for a few weeks before the finals, we would practise there together, just the three of us. It really helped that we didn't have to rely on voice calls and we had better teamwork because of that.

PTE (NS) Yeo during a training session at SCAPE. The three team members had their set-ups side by side to communicate more effectively during their game. [Photo: Singtel]

We'd find teams from other regions to practise against and to test our servers. We would train for two to three hours a day; but because these teams were from America or Europe and their time zones were different from ours, we'd be training at either after midnight or very early in the morning.

4. Were your parents always supportive of you playing e-sports?

My mum was quite disapproving at the start. I can't blame her because I did let my grades slide. But towards the later part of this year, she saw that I was getting results and she started getting very enthusiastic. She would take pictures of me before I go out to play my games at SCAPE; it's a little embarrassing... (laughs)

Each Brawlers PSG e-sports team member received Brawl Stars merchandise and a World Champion's medal (pictured on the left) for their win.

5. What skills do you pick up from e-sports?

In games, there's mechanics and game sense. Good mechanics requires hand-eye coordination, good reflexes for you to be good at shooting and aiming. Game sense is knowing what to do at the right time, so it improves your critical thinking too.

For team games, you also need to have good teamwork - because our Brawl Stars' team members ranged from 16 to 25 years old, we need to adjust the way we speak to each other in order to communicate better.

6. Does a gamer need to get the best gaming chair, PC, keyboard, etc to do well?

This costs $70 (points to his "gaming" chair), so, no, I don't think it's necessary. I don't think you need to invest in your equipment right away.

But if you discover you're good at something and your set-up is holding you back, then go for it.

I used to play Brawl Stars on my phone but there's an advantage in using an iPad Pro because of the higher frame rate, so I used my prize money from the preliminary rounds to get one.

PTE (NS) Yeo doing a warm up of the Brawl Stars game on his iPad Pro. Brawl Stars is a Multiplayer Online Battle Arena game, played on mobile devices.

7. You ORD-ed (Operationally Ready Date) not long before you started training full-time for Brawl Stars. What was the best thing about your National Service (NS)?

My driving course was probably the best time of my NS because we got to learn to drive all sorts of vehicles to perform tasks for the company. This included land rovers, 5-tonners, 6 tonners and even a trailer.

But I would say my most exciting days were from BMT (Basic Military Training) - even though it was tough, it was memorable. We got to go to field camp, and I'll probably never get another chance to dig a shellscrape or do drills in the jungle again.

8. What about the toughest thing?

My biggest challenge was inducting into my new unit because I went there without knowing anyone. But after a few weeks, more (recruits) joined in and that's when I made my closest friends in NS - we still talk often and play games together.

Overall, I'm quite thankful for the experiences I've had in NS. I've learned to interact with different groups of people and I know that there's always something good you can make of in any situation.

9. What's next for you and your Brawl Stars team?

We've slowly changed into a "League" (of Legends) group (laughs) and we play for a few hours every night. It's the off-season now so people are thinking of which team to join and preparing for next year. I don't know if I will continue because I'm going to study Medicine and I'm not sure if I'll have time to juggle both.

But if I can, I will definitely try. It's a great side income and, after all, it's most young guys and girls' dream to be able to play games and win money.