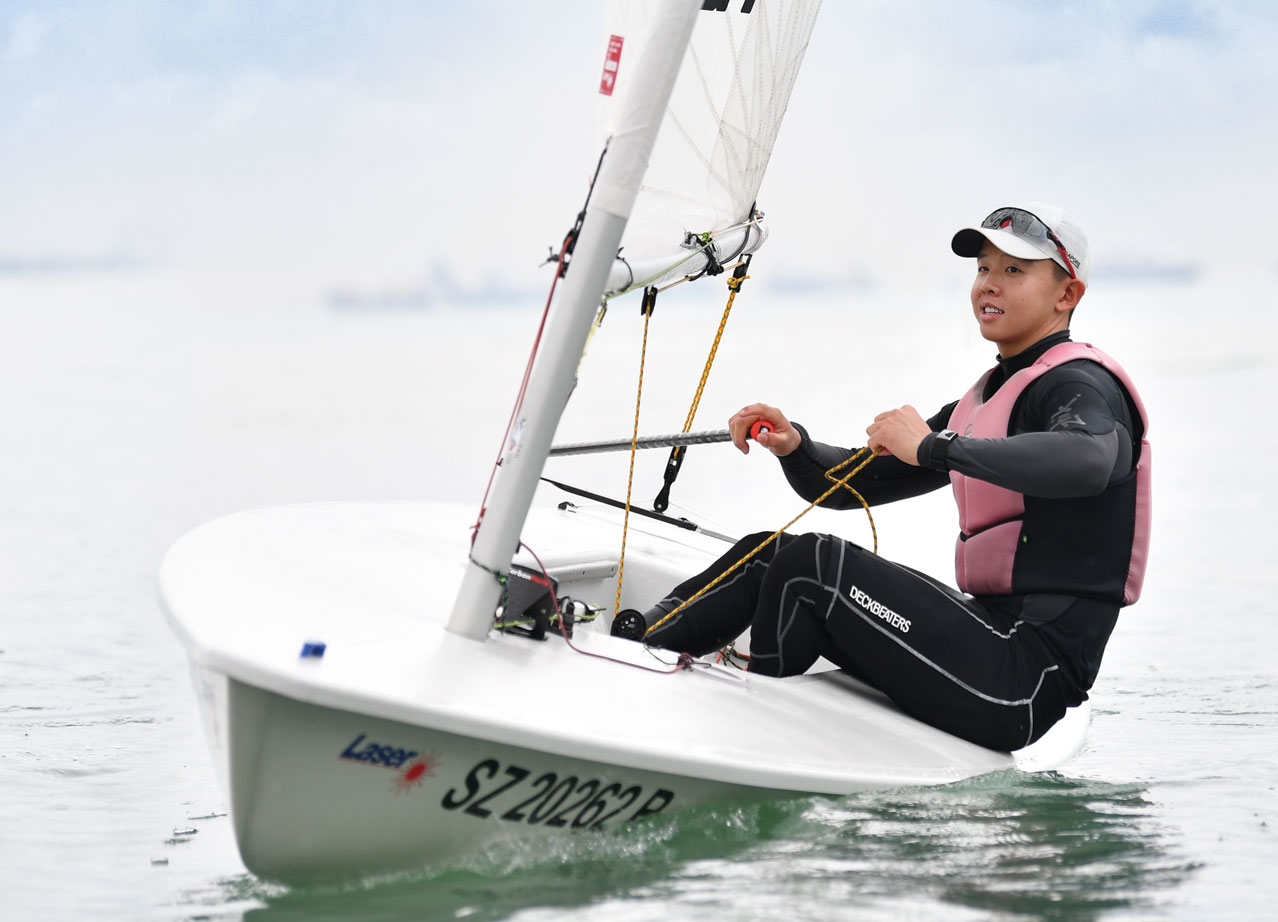 English Melayu
Team Singapore sailor CFC (NS) Lo is putting his studies on hold to train full-time for the 2020 Olympics in Tokyo. He aims to win gold at Paris 2024.

By the time you read this story, CFC (NS) Lo would have finished his NS - and is racing in the waters of the Bay of Aarhus in Denmark. He is competing in the Sailing World Championships as part of his road to the 2020 Olympics in Tokyo.

"My goal is to win a gold in the Paris Olympics in 2024, but my focus now is qualifying for the Tokyo Olympics," said CFC (NS) Lo, in May.

The 21-year-old, who was once the world's No.3 youth sailor, stands a real chance. After all, he won two Gold medals (Individual and Team) at last August's Southeast Asian (SEA) Games, and a month later, he finished 36th - as the top Asian sailor - at the Laser Standard World Championships.

It's an amazing feat for a Full-time National Serviceman who had to juggle his NS duties and sailing training.

"There is no secret formula," said CFC (NS) Lo, an amphibious vehicle technician in the Singapore Army. "Although I am in Army most of the time, I train whenever I can."

He trained almost every day in the last two years. On weekdays, after completing his duties in the vehicle workshop, he headed for gym and cardio training in the evening. His only "rest day" was Tuesday when he went for mental strength training with a sports psychologist.

Weekend training was more intense: He would begin his day at about 11am, cycling from his home in Katong to the National Sailing Centre, about 8km away, as a warm-up.

This was followed by sailing, cycling and gym training. By the time he called it a day, it was often 6pm. "I do feel tired sometimes, but it's okay - I am motivated to train. If I want to achieve my goal, I need to do it."

A team from the Singapore Sports Institute - comprising a nutritionist, psychologist, physiologist, and strength and conditioning coach - also helped to keep his body in optimal condition.

"The sports science team monitors my training load every day, (and) tapers my training program depending on my condition that day," he said, adding that the Singapore Sailing Federation also provided him with the necessary support such as funding for training and competitions overseas.

It helped that he had strong support from his platoon mates and superiors at 31st Forward Maintenance Depot, 3rd Army Maintenance Base. "They have been very understanding about my training," said CFC (NS) Lo. "They helped out a lot as I had to be away from work sometimes. Whenever I was back in camp, I would always do my best to help them too."

Last year, the Ministry of Defence granted him time-off on days when operational requirements allowed so that he could ramp up his training three months before the SEA Games in Kuala Lumpur.

When he enlisted for NS in July 2016, CFC (NS) Lo was initially worried that the time away from training might affect his sailing career.

"All the other international sailors are constantly training and competing and I was afraid the gap between me and them would gradually widen. But I told myself to do my best for these two years, and make the best use of my time to improve as much as I could."

He added: "It was challenging for me to balance my NS duties and sailing. But it's also important for me to leave the Army with no regrets."

Asked what advice he would give to NS-bound national athletes, CFC (NS) Lo said: "Always continue to believe in yourself. Stay focused on your goal, and keep going even if you don't see visible results."

"Always continue to believe in yourself. Stay focused on your goal, and keep going even if you don't see visible results."

Right after the Sailing World Championships in Denmark, CFC (NS) Lo will compete in the Asian Games from 18 Aug to 2 Sep. His target? A gold medal, of course.

He will be putting his university studies on hold so that he can train full-time. It's not the first time he has made such a sacrifice. In 2015, he dropped out of Raffles Institution midway through his A-level studies, to train and compete in Europe as well as in Canada.

Asked to rate his chances of winning an Olympic gold medal in 2024, he simply said: "I don't know how I will fare but I have confidence in my (training) process; I believe in what I am doing right now."