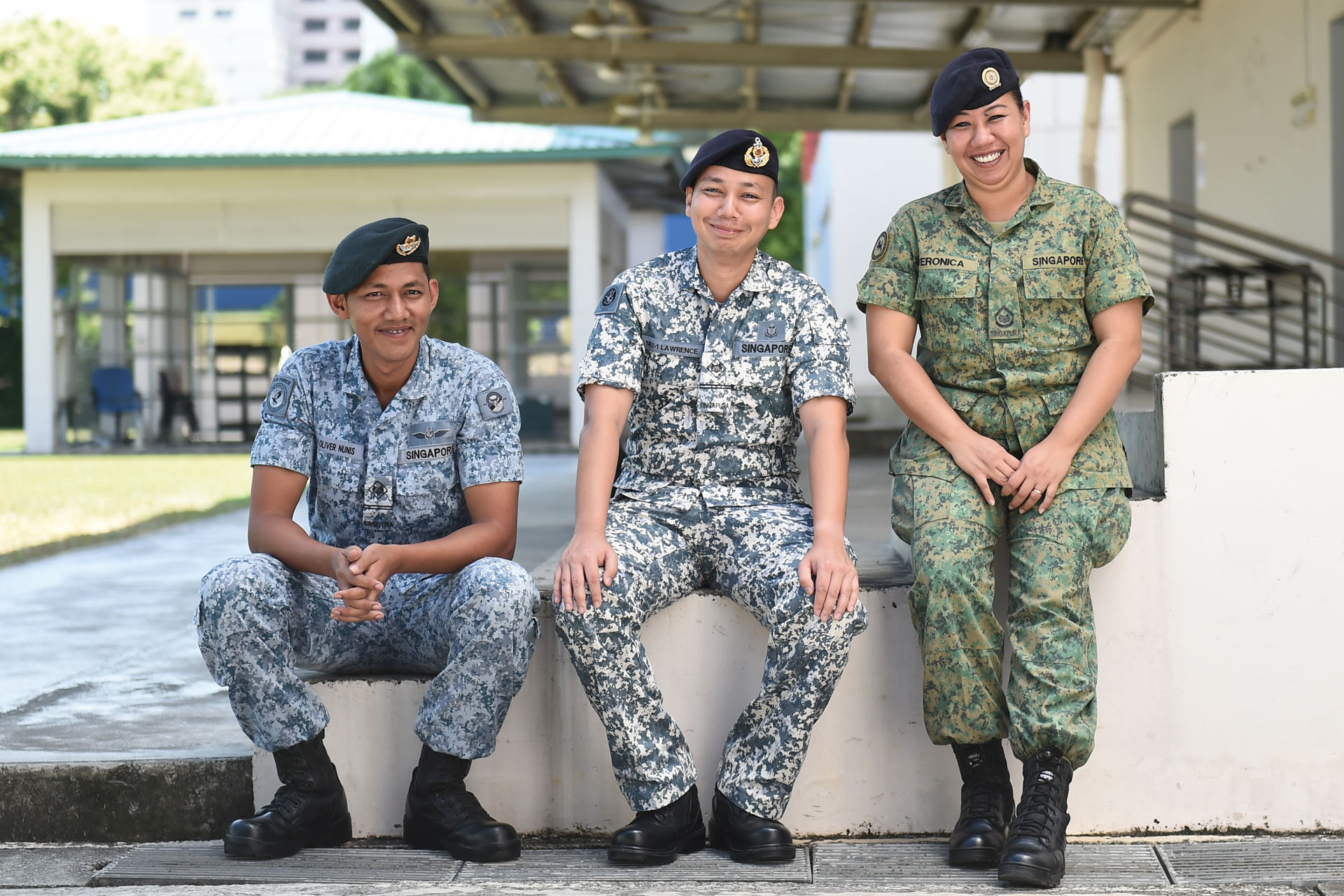 English Melayu
ME2 Oliver, ME2 Lawrence and 2WO Veronica never run out of topics to talk about.

"Why is your uniform so tight? You need to tuck your stomach in,” said 2nd Warrant Officer (2WO) Veronica Nunis while poking her younger brother's tummy during our photoshoot in Mowbray Camp.

Chortling just a few feet away, ME2 Oliver Nunis was clearly enjoying the drama unfolding before him.

The familial bond is clear: they finish each other's sentences and engage in teasing banter at every opportunity.

At 40, 2WO Veronica is the second eldest among seven siblings. The Regimental Quartermaster Sergeant from Island Defence Training Institute joined the Singapore Armed Forces (SAF) when she was just 17.

The former is a rapid runway repair instructor from 506 Squadron while the latter is a maritime propulsion supervisor under the Maritime Security Task Force. They also have another brother in the Singapore Police Force.

Veronica Growing up, we stayed in a colonial house in Seletar West Camp. We had to book in to go home, and we used to see Army personnel doing their route marches while we were cycling.

I wanted to sign on 'cos they looked cool marching in their uniforms and carrying big guns!

Oliver My father felt that being in the military would keep us on the right track. My sister was already in the Army so I decided to join the Air Force as I wanted to avoid comparison.

Lawrence I wanted to step out of Oliver's shadow. We were together throughout our primary and secondary school years and I was always known as Oliver's brother. I needed a fresh start and signing on with the Navy gave me that opportunity.

What did your parents say when you joined the SAF?

Oliver My dad feels immense pride! Everywhere he goes, he never fails to mention that we are all uniformed personnel.

Lawrence (chiming in) He can go to a shop, buy a pack of cigarettes and say: "Eh, my sons are in the Service you know?” Next thing you know, he's talking about our whole family tree.

Veronica He bugged another brother to join the Singapore Civil Defence Force to complete the picture, but unfortunately it didn't happen. (chuckles)

Has anything changed since growing up?

Lawrence (points to his two siblings) No, they still bully the younger ones.

Veronica (laughs) There is a lot of comparison about work now and who's busier than the other. When we were staying together, we used to go to the coffee shop to have family dinner every weekend. Now that we have our work commitments and are living apart, we don't really visit each other that often.

Oliver I try to visit her once a month. I stay in Sengkang and she stays in Choa Chu Kang, it's $31 far! But Lawrence and my parents live in Tampines, so I see them more often.

How would you describe one another?

Veronica Oliver's the serious and disciplined one. Lawrence is more laid-back and happy-go-lucky.

Oliver Veronica is obsessively dedicated to her work. She brings her work home all the time. Even if you had interviewed us on a weekend, she would probably still make us come to Mowbray Camp!

Lawrence My sister likes to control her life a bit too much. Everything is planned out carefully, even for something simple like a birthday party.

Veronica It's called organisation! In the Army, we always plan and organise. You need to find out what can and might go wrong, and combat that so that the event will go smoothly.

Do you guys discuss your work often?

Oliver My job has a lot of classified stuff and I can't talk to my wife about it. It's easier when you have siblings in the SAF 'cos they understand what you're going through. The pillar of support is very important.

Final question: Any pulling of ranks at home?

Oliver No matter what, she'll always win…'cos she's the older sister. Unless we go by height, then I'm the "highest rank".