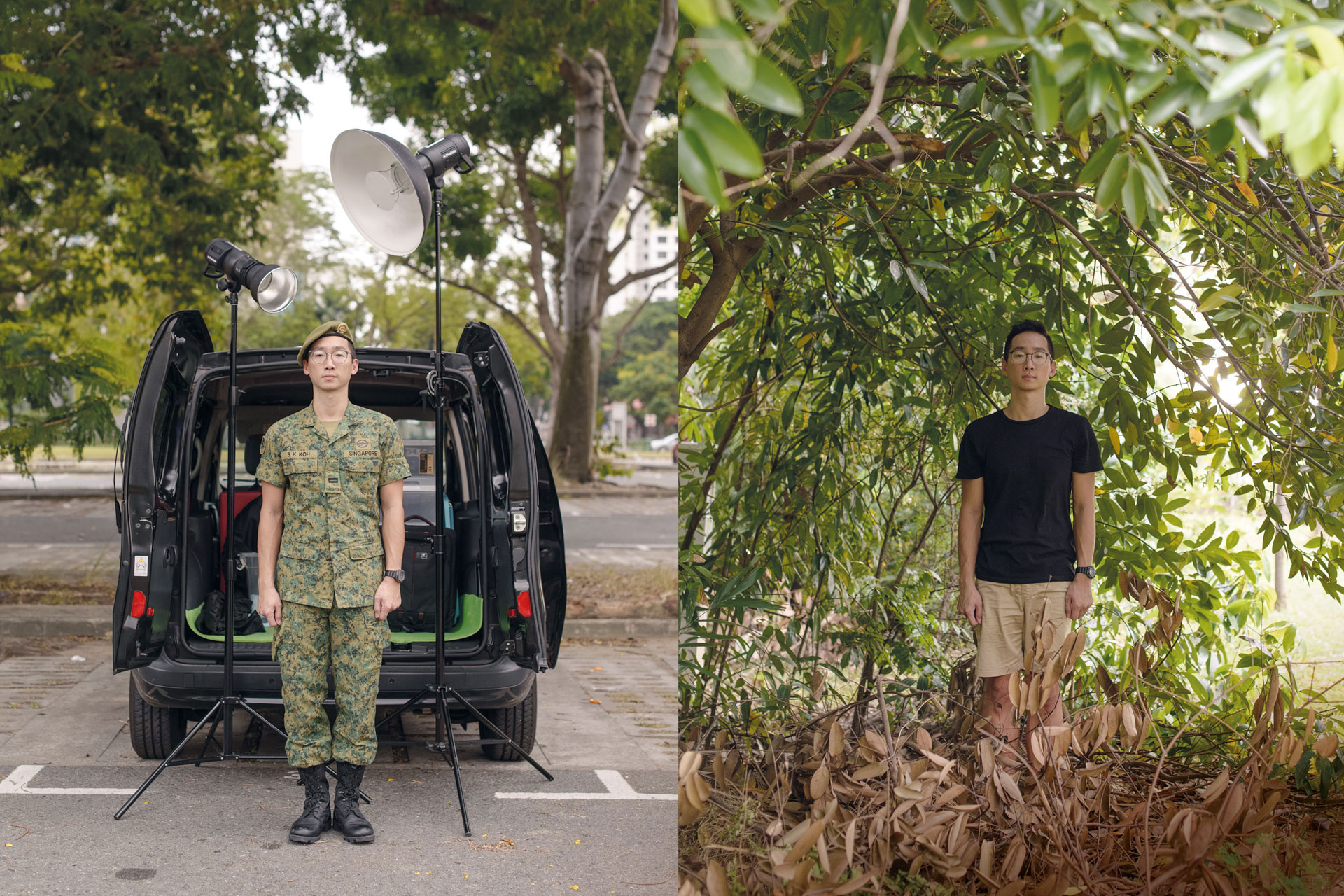 English Melayu
You will not find the photographer in his own With Our Lives series but Mr Koh gladly obliged to take a self-portrait for PIONEER.

"I realised during ICT (In-Camp Training) that…we (national servicemen) contribute to both the military and economy. So why not document this diversity of the roles we play?" the photographer told PIONEER.

His resulting photo series, titled With Our Lives, portrays each of the Operationally Ready National Servicemen (NSmen) in a set of symmetrical images — one dressed in Smart 4 at his civilian workplace, and the other in his work outfit against a forested background. There are no thrills and frills to his images — each man stands upright in a "sedia" (at attention) position and carries no equipment or prop.

Yet when posted on Facebook, the gallery received more than 3,300 likes and was shared more than 3,000 times within the first week — including by Prime Minister Lee Hsien Loong.

"Maybe people saw the album about the army and could connect with it, so they shared it," Mr Koh said modestly about the traction gained by the album. "We (NSmen) complain a lot about the hard work in camp — that's very relatable!"

The 31-year-old almost gave up on this personal project, which he began four years ago.

"After the idea came, it took a while to start. Finding the first person was the hardest — even my best buddy in reservist, who was keen, wanted to be photographed the last," Mr Koh said with a laugh.

When the former Lieutenant finally photographed 18 of his army mates, his computer hard disk and its network back-up crashed. This demoralised Mr Koh, who only revisited the project two years later in 2016.

"Our morale was quite high after our ninth ICT so I said, 'okay, let's try this again'. I quickly kick-started the first shoot and got the rest going."

Mr Koh took a year to shoot 27 profiles, of which 11 were reshoots of the first batch of lost files. He recently printed and compiled them into a book which he sold, below cost, to his army mates at their MINDEF Reserve (MR) parade on 5 Mar.

The book has the 26 NSmen infantry troopers arranged alphabetically by name "to show that in the whole unit, we are peers rather than authority and subordinates," explained Mr Koh.

The twist is the last photo set of 803 SIR's first Regimental Sergeant Major, whom Mr Koh describes as "like a father" to the battalion and played a big role in their bearing.

The only Regular servicemen in the series, 1st Warrant Officer Francis Loke has his photos placed in reverse order — first in civilian clothes at a military camp, then in his Smart 4 at home as a "husband and father".

This blend of sentiment and quirky style is distinctive of Mr Koh's photography.

In 2012, his Faces of NDP album featured people of all races and religions celebrating Singapore's National Day. The photos are extreme close-ups of each person, putting emphasis on every unique face. He also did The Dollar Shop, a photo series on NTUC trolleys being pushed home and parked outside people's apartments.

Although Mr Koh has spent most of his eight-year career on commercial shoots, it is these personal projects that drive his photography passion. "My interest has always been to showcase something Singaporean in our country's backyard," he said.

A self-taught photographer, Mr Koh graduated with a Marketing degree from the Singapore Institute of Management — RMIT University in 2010. The next year, he won the prestigious Canon PhotoMarathon competition.

"I gave myself five years to pursue photography and if I couldn't make it, I'd get an office job," he said. "After five years, I was not rich but not poor either, so I continued on."

Mr Koh, who has his own photography firm Oddinary Studios, noted that he had lost potential clients whose projects coincided with his ICT.

"But the tough times don't last, and you make important memories with your peers (during ICT)," he concluded.

The former Platoon 2nd In-Charge described his battalion's ninth ICT in 2016, where they performed protection of key installation duties, as "the pinnacle of (their) ICT".

His platoon undertook a 12-hour shift guarding Jurong Island, where Mr Koh manned the armskote and was also based in the control centre.

"I could hear the watchmen calling in and the guys did not take any chances. All night you'd hear the radio cracking and there wasn't much rest."

Proudly, he recalled: "Everyone really put in effort in carrying out their duty… It was the summary of the training and bonding we had built from the years before."

"I used to run my own design agency — sometimes clients don't understand that we have to fulfil our NS responsibilities and demand that we answer queries even in camp.

"But I get the most satisfaction in serving as a soldier and also completing my tasks at work. Of course, seeing all my brothers in camp is a pleasure."

"Seeing one another advance in our lives (over these years), becoming successful or starting a family, shows us why we serve. Having been an OC for so long, I'm certain that the time I've spent with my company mates has enriched my own life. Hopefully, I've enriched their lives too."

"The bond and understanding that the men created as buddies, as a section, and as a company is every commander's dream…You can imagine the pride one feels when the boys are sad on their last day in camp and your WhatsApp is flooded with questions about when the next call-up will be."