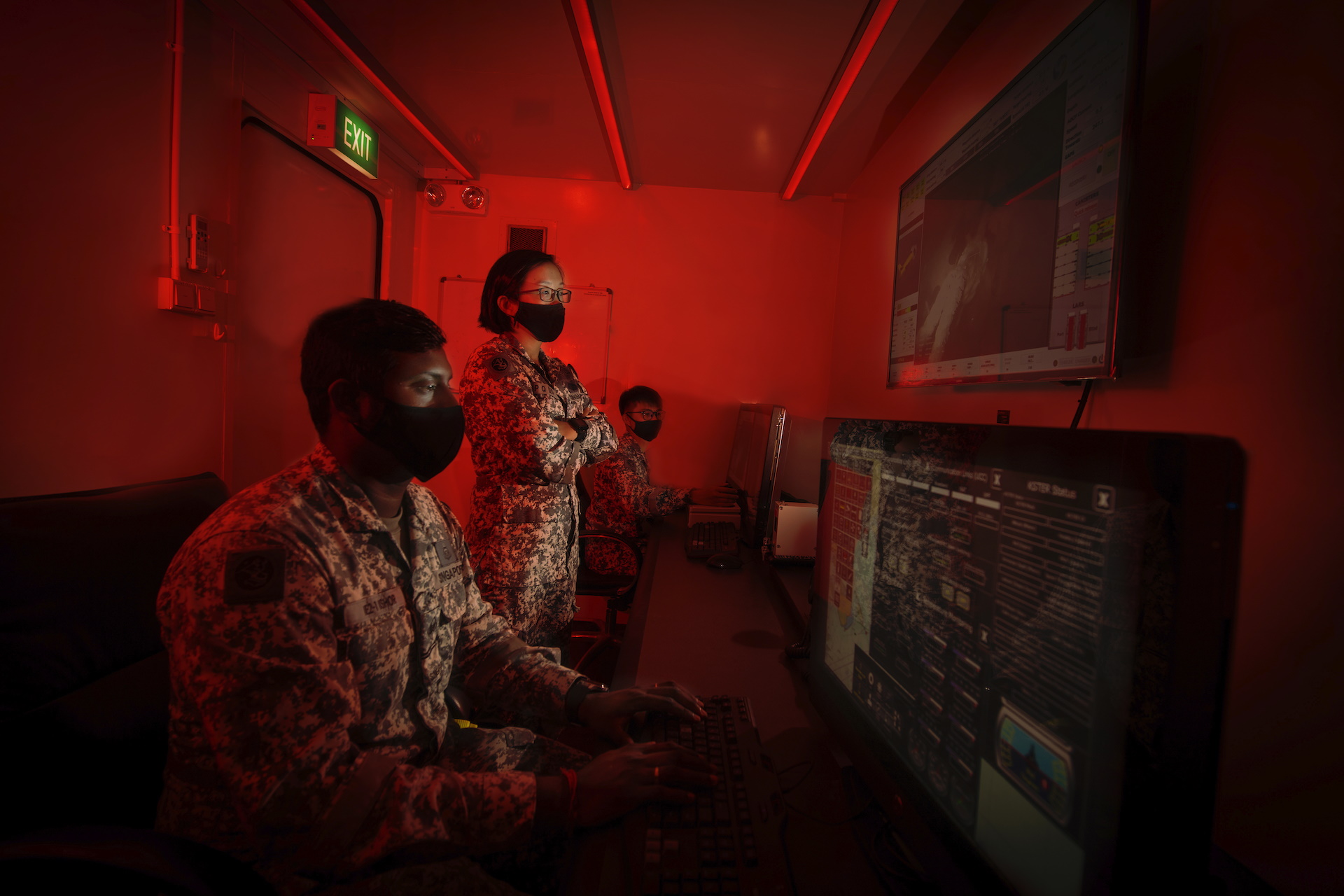 English 华文
MAJ Leo (centre) with two operators as they analyse images captured by the K-STER Expendable Mine Disposal System launched from a Mine Countermeasure USV, to identify and later detonate an underwater mine.

A mine has been detected and identified in Singapore waters. An Unmanned Surface Vessel (USV) sails out and autonomously launches the K-STER Expendable Mine Disposal System (EMDS).

Operators remotely control the EMDS from a station on shore, steering it towards the mine.

The coast is clear; the crew has its target squarely in its sights. The operators fire the EMDS, successfully detonating the mine.

This trial by the Republic of Singapore Navy's (RSN's) 6th Flotilla on 29 Jan marked its first successful neutralisation of a simulated underwater threat by a USV – the first of its kind in the world.

The Mine Countermeasure USV team loading the EMDS onto the USV during their launch and firing on 29 Jan. [Photo courtesy of the RSN]

The development of such unmanned capabilities is one of the RSN's key focus areas as part of a recent restructuring to strengthen its capabilities.

Under the new structure, 6th Flotilla will helm the development and deployment of unmanned surface and underwater craft.

Chief of Navy Rear-Admiral Aaron Beng officiated the inauguration of the new flotilla in the RSN Flotilla Inauguration Ceremony on 9 Mar.

This Mine Countermeasure USV is able to detect underwater mines via sonar.

The RSN is working alongside partners – such as the Defence Science and Technology Agency and DSO National Laboratories – to trial and fine-tune the use of unmanned vessels for maritime security operations, including mine clearance.

In the past, all maritime security operations were conducted by manned ships. For example, if sea lanes needed to be cleared of underwater threats like mines, the RSN would deploy its Mine Countermeasure Vessels (MCMVs).

As technology evolved, the EMDS was introduced in 2012 and deployed off the MCMV to keep some distance between the ship and the threat.

With the introduction of the Mine Countermeasure (MCM) USVs in 2017, the crew is kept entirely ashore, out of harm's way, while the USV investigates and neutralises the underwater threats.

The identification of unmanned capabilities as a niche area helmed by 6th Flotilla has helped MAJ Leo build greater expertise in her role.

"Having the EMDS launched from an unmanned vessel makes sense because it saves a lot of manpower and time," said Major (MAJ) Sandra Leo, 33, Executive Officer of the MCM Squadron in 6th Flotilla.

Currently, when the EMDS is launched from one of the MCMVs, its crew has to manually deploy the 50kg system with a crane. With the MCM USV, the EMDS can be pre-loaded and launched autonomously.

It takes about 10 minutes to launch the MCM USV with the EMDS to sea for operations, while an MCMV out at sea needs about 30 minutes to prepare and launch.

The adoption of unmanned technology also reduces the manpower needed for such operations. A total of three people – a Mine Hunting Officer and two USV operators – are needed to operate the EMDS from the unmanned control station, compared to a MCMV that has 32 crew on board.

Moving from remote to autonomous

In addition to the MCM USVs, the RSN is trialling the use of USVs for maritime security to conduct round-the-clock patrols as well as investigate and intercept suspicious vessels in Singapore waters.

Sea trials for these self-driving Maritime Security USVs will be completed by the end of this year.

To MAJ Leo, it is a privilege to be part of this project: "It's an exciting time to be in 6th Flotilla – we are pushing boundaries and realising dreams as we write the next chapter for our unmanned journey." Every day, while Republic of Singapore Navy (RSN) warships sail to protect Singapore's waters and safeguard its sea lines of communication, there is a force that keeps Tuas and Changi naval bases, as well as offshore installations, safe. 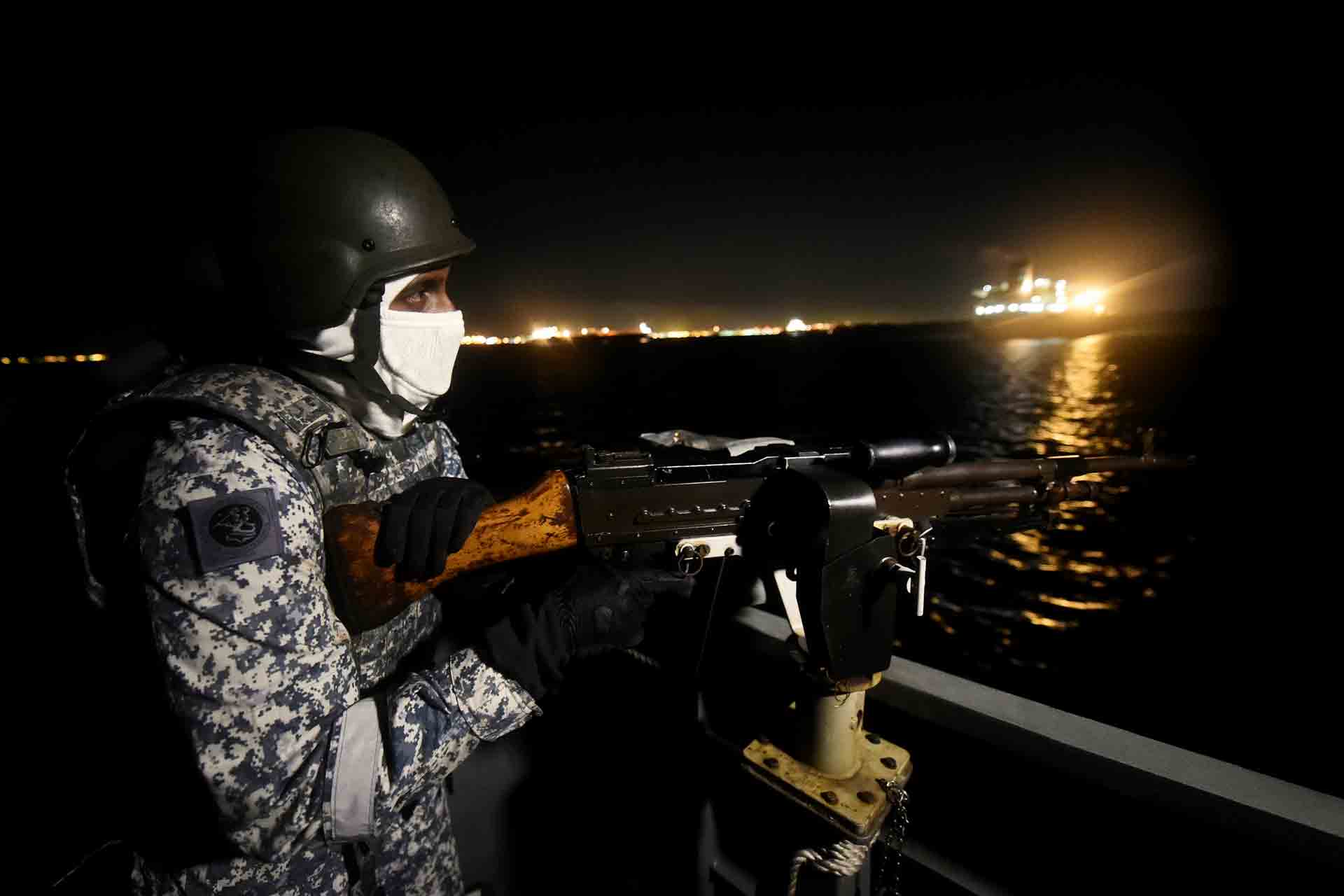 PIONEER puts the spotlight on the Republic of Singapore Navy's (RSN's) Maritime Security Task Force (MSTF) and how it safeguards Singapore's waters against intrusions and security threats from the sea.