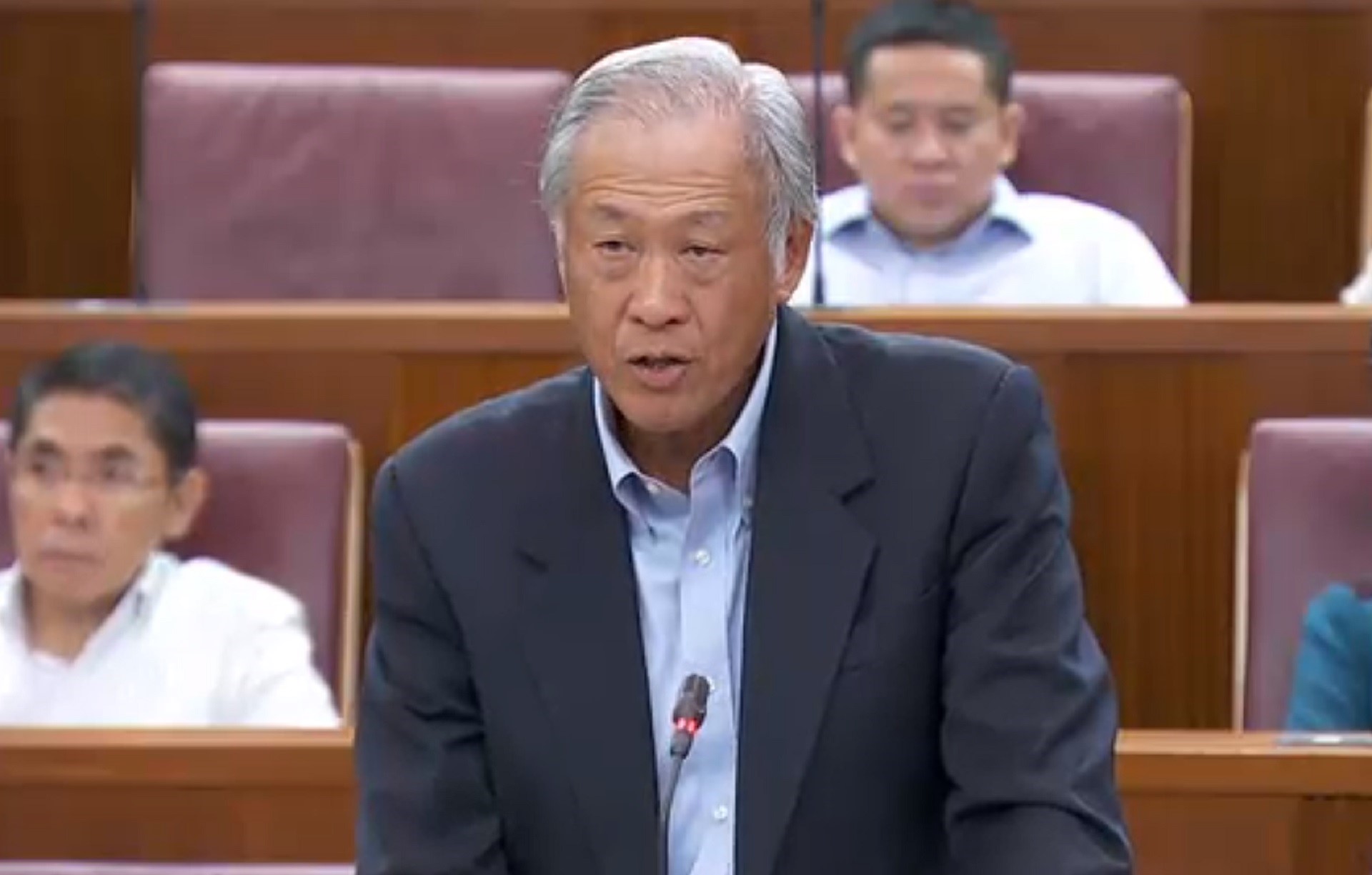 This is in response to findings by the Committee of Inquiry (COI) looking into the training incident involving Corporal First Class (CFC) Liu Kai. A Full-time National Serviceman (NSF), CFC Liu died on 3 Nov 2018 after a Bionix reversed into the Land Rover that he was driving.

The new measures were announced by Defence Minister Dr Ng Eng Hen in his Ministerial Statement on 11 Feb. He was addressing National Service (NS) training deaths and safety enhancements for the SAF in Parliament.

"If we are to achieve zero fatalities during NS training, we must have a strong safety culture in all our units, and safety consciousness down to the last soldier. Commanders and supervisors must lead by example to emphasise safety," said Dr Ng, adding that commanders must be held accountable for the safety of their men and units.

Since November 2018, all Bionix vehicles used for training have been installed with two e-horn activation buttons in the rear crew compartment. This is in addition to the existing button located in the vehicle commander's seat compartment.

With the installation of additional e-horn buttons, rear crew are able to provide an additional pair of eyes and help to alert the operator of unfavourable situations.

As a Section Commander in 41st Battalion, Singapore Armoured Regiment (41 SAR), 3rd Sergeant (3SG) Muhammad Farhan Bin Abdul Hamid looks out of the rear crew compartment to check for obstacles and hazards, and relays instructions from the Vehicle Commander to the troops.

Hazards may occur not only externally, but also within the vehicle, as he explained: "One example (of an emergency) is when communication is lost between the Section Commander and Vehicle Commander. We cannot operate without communications, as safety (is our) highest priority, so the vehicle must be stopped immediately."

Another new safety feature is the installation of a rear-view camera system in the SAF's training fleet of Bionix vehicles. Through cameras installed on the back of the vehicle, operators will be able to see a live video feed of its rear surroundings on an integrated display panel mounted in the driver compartment. This will enhance the operator's situational awareness, especially when reversing.

The installation of this camera system will be carried out progressively from March and will be completed by 2020.

In his Ministerial Statement, Dr Ng also spoke on five other safety measures that will be introduced by the Army.

The first is to implement safety table-top exercises that will be conducted before the commencement of all high-risk non-live firing exercises. This is to familiarise personnel with evacuation plans and allow them to respond more quickly in emergencies.

The second is to have more experienced Regular added as trainers. This will allow more national servicemen to benefit from the Regulars' experience and the currency of their knowledge and skills.

Captain (CPT) Randy Zhang, for example, has been able to lend his experience to trainees from 41 SAR. A Platoon Trainer from the Active Unit Training Centre (AUTC), he follows trainees during training sessions to enforce training standards and safety.

"We look out for things such as making sure that their drills are standardised across the formation and that safety guidelines are followed. So whenever there is a breach of training safety, we are there to stop the training and tell them (the trainees) what's wrong and what to improve on," said the 28-year-old.

The third new measure is to upgrade medics' skills in resuscitation and the handling of emergencies. This will begin from March and will see them being attached to hospital emergency departments or ambulances.

The fourth is to improve vehicle and equipment serviceability based on the recommendations of the External Review Panel on SAF Safety.

The last is with regard to the safety distance between vehicles. Trainers will travel in combat vehicles together with the exercise troops instead of Land Rovers during high-risk training. In all reversing manoeuvres, operators can only reverse the vehicle after receiving explicit clearance from the rear guide.

On the Inspector-General Office (IGO) announced earlier, Dr Ng said that this dedicated unit at the highest level will "drive and supervise a safety culture and enforcement against slack practices". This was in response to ERPSS findings that more compliance checks and ground-level audits were necessary.

The current Safety and Systems Review Directorate will be expanded and elevated to form the IGO. It will be headed by the SAF Inspector-General, who concurrently serves as Chief of Staff – Joint Staff. The IGO will report jointly to the Permanent Secretary (Defence) and Chief of Defence Force.

In its first year, the IGO will be focusing on high-risk training and safety culture checks. It will also investigate reports of poor safety practices and culture at any level in the SAF. SAF safety performance reports will also be submitted regularly to the Minister for Defence.

"Ultimately, safety is both a command and individual responsibility and everyone needs to play their part because precious lives depend on it. It is not true that we cannot train safely if we want to train realistically," Dr Ng said in closing.

"If we have a strong safety culture and safety systems, it will give soldiers greater confidence to train hard and realistically."