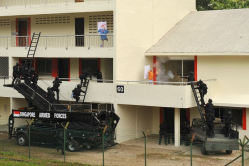 Working together to boost counter-terrorism efforts

The Singapore Armed Forces (SAF) and the Indonesian National Defence Forces (TNI) came together to enhance counter-terrorism efforts through the Joint Counter-Terrorism Exercise conducted in Singapore from 14 to 16 Jul.

About 150 personnel from the SAF and TNI participated in the three-day exercise, which comprised a professional sharing workshop and component counter-terrorism training.

Chief of Defence Force Lieutenant-General (LG) Neo Kian Hong and Commander-in-Chief of the TNI Admiral (ADM) Agus Suhartono officiated at the closing ceremony of the exercise, held at the Lim Chu Kang Training Area on 16 Jul.

In his address, LG Neo said the exercise "is indeed a testament to the depth of our relationship and the familiarity of both armed forces working together". He added that Singapore and Indonesia shared a strong and long-standing defence relationship, and had a "rich tradition of bilateral exercises and close people-to-people relationship".

LG Neo also emphasised the importance of this exercise: "Other than achieving a greater collective capability in counter-terrorism, such cooperation also sends a clear message that regional forces have the will and capability to neutralise threats to our security."

ADM Suhartono said that the exercise had "strongly motivated and encouraged the two countries to deeply understand the various aspects of counter-terrorism".

Before the closing ceremony, LG Neo and ADM Suhartono observed a combined counter-terrorism demonstration by participating SAF and TNI troops.

Said an SAF trooper who took part in the exercise: "We learned from each other about the different practices employed in counter-terrorism... The exercise also enhanced our mutual understanding of each other's working culture, and this will allow us to work together more effectively in future exercises."

Commander of Commando Training Institute Colonel (COL) Ang Yau Choon, who was the Executive Committee Chairman of the TNI-SAF Joint Counter-Terrorism Exercise said: "Both the SAF and TNI have sent soldiers to attend each other s courses, thus allowing us to learn from one another. There are also regular interactions both at the unit level and the highest level, thus enhancing working relations between Singapore and Indonesia."