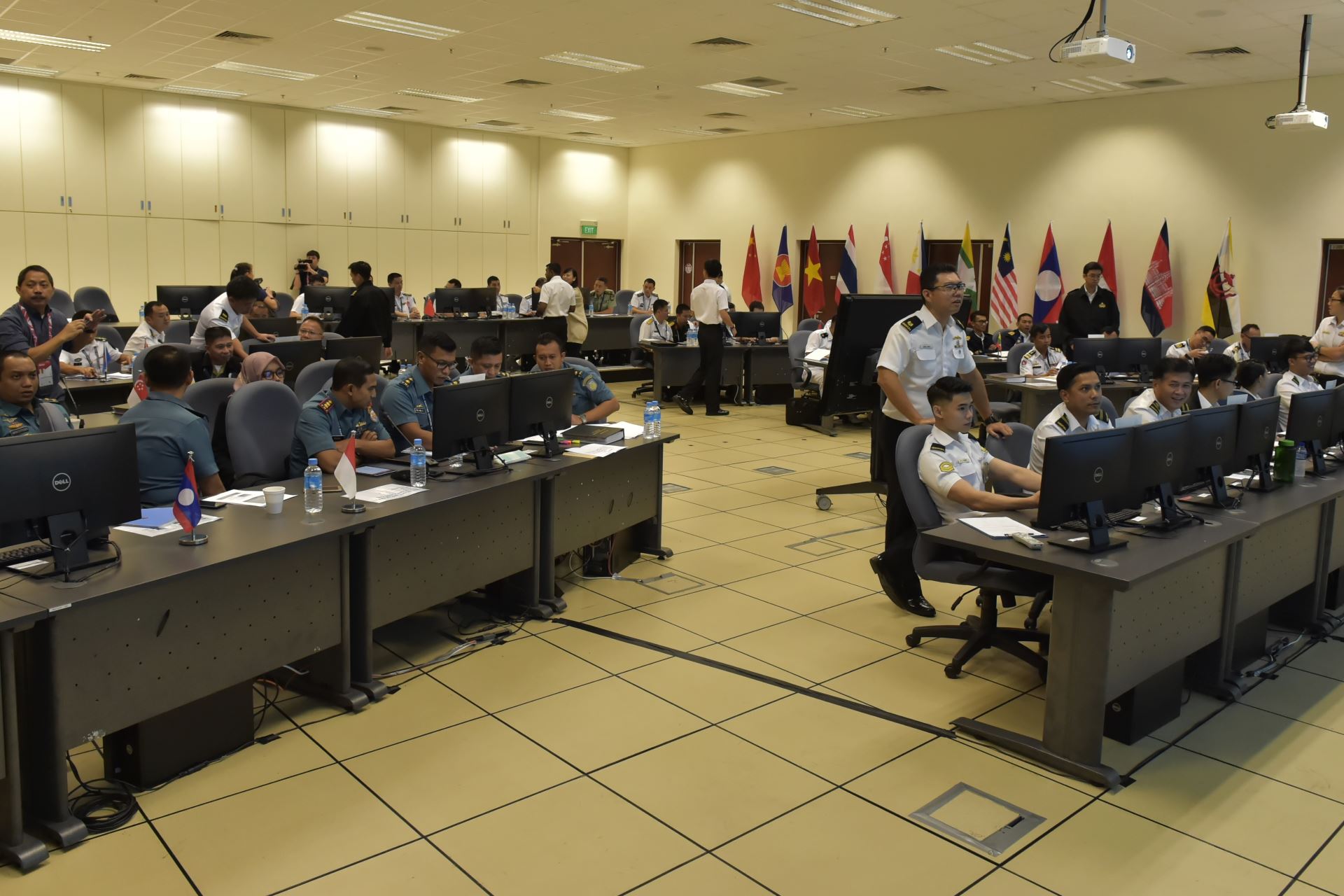 More than 40 participants from the navies of all 10 ASEAN countries and China took part in the Table-Top Exercise (TTX) which focused on the development of plans to conduct joint rescue operations out at sea. The two-day TTX ended on 3 Aug.

The TTX is the first phase of the inaugural ASEAN-China Maritime Exercise which paves the way for greater cooperation and mutual trust between the participating naval forces.

Earlier in February this year, ASEAN and Chinese Defence Ministers had agreed to conduct the first joint maritime exercise between ASEAN countries and China in 2018.

Hosted by the Republic of Singapore Navy (RSN), the exercise was held at the Multinational Operations and Exercises Centre (MOEC), housed in Changi Command and Control Centre at RSS Singapura – Changi Naval Base.

During the TTX, the ASEAN and Chinese navies developed plans that will be exercised during the ASEAN-China Maritime Field Training Exercise (FTX) which will be held in October this year.

For example, the participants developed a joint search and rescue operation plan to assist civilian or merchant ships under distress in international waters by applying the Code for Unplanned Encounters at Sea (CUES) - an agreement reached in 2014 with the aim of reducing incidents at sea.

Applying CUES, they developed plans on how their respective ships should manoeuvre together towards the incident location. They also worked out plans for the transfer of people or supplies from one ship to another via helicopters.

Other plans included the evacuation of the critically injured to a ship with the necessary medical facilities or to a hospital on shore. Come October, these plans will be put to the test in a field exercise during the second phase of the ASEAN-China Maritime Exercise.

Colonel (COL) Lim Yu Chuan, co-director of the TTX, said the exercise represents a "very important" first step for navies from ASEAN and China to work together during maritime incidents.

"We have had a productive discussion and developed plans that have helped enhance mutual understanding and promote cooperation between our navies.

"We look forward to further practical cooperation and to exercise these plans later this year," said COL Lim, who is Commanding Officer of 185 Squadron.

These sentiments were echoed by TTX co-director Captain (CAPT) Liang Zhijia from the Chinese Navy: "The exercise is beneficial to promote military exchanges and cooperation between China and ASEAN member states." He is Deputy Chief of Operations, Naval Forces of the People's Liberation Army (PLA) Southern Theater Command.

"The TTX and FTX is a good platform to build confidence, cooperation and understanding between our navies. We all have common interests and we should work together. Such practical cooperation will help to build trust so that we can work towards safer seas for all."

For exercise participant CPT Yuthanavi Mungthanya from the Royal Thai Navy, he felt that, through the exercise, the various navies were able to understand each other's capabilities, and put together plans incorporating the best practices.

"I am confident of what we are doing. We can deal with the maritime incidents more effectively by working as a team," said CAPT Mungthanya, who is Deputy Chief of Staff, Royal Thai Navy's Frigate Squadron 2.

As part of the TTX, all 10 ASEAN navy chiefs as well as senior officials from the PLA visited the MOEC on 3 Aug to observe the exercise. The navy chiefs are in Singapore to attend the 12th ASEAN Navy Chiefs' Meeting which will be held on 4 Aug.