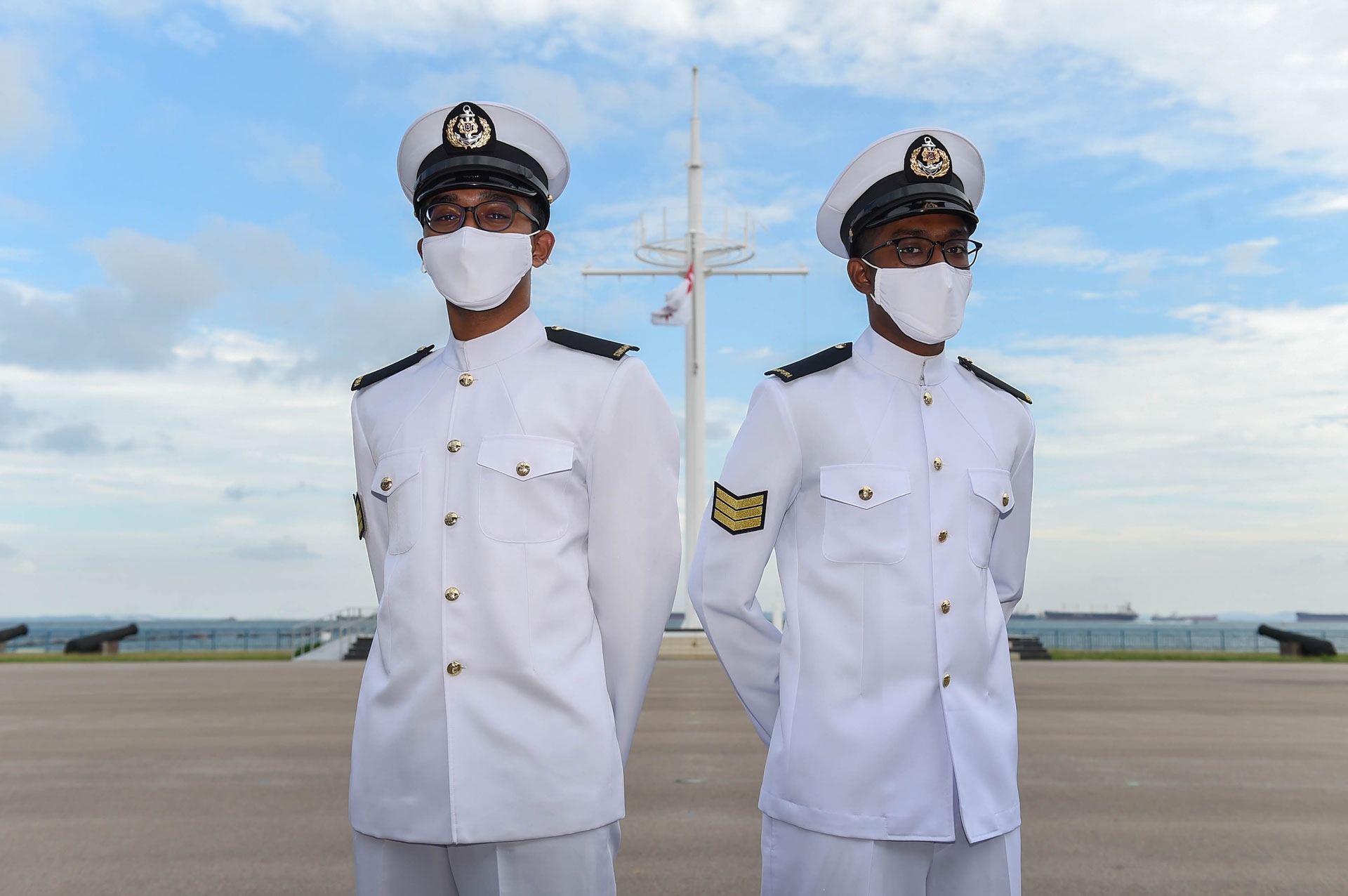 Ready to defend the sea as Specialists

"My family was very excited by the fact that me and my brother were enlisting," said 3SG Varun. Serving National Service (NS) with the Republic of Singapore Navy (RSN), he said, had given them a greater understanding of the importance of protecting Singapore's seas.

"We often hear about Singapore being a maritime nation, but I don't think I completely understood what it meant until I came into the Navy...and until my instructors told me about the different missions that they were deployed to, and the other missions that the RSN has taken part in."

As a naval weapon specialist, 3SG Varun operates the small arms and A-gun on board a missile corvette. Brother 3SG Arun is a naval communications specialist whose duty is to send and receive radio messages to and from other ships in a fast yet reliable and secure manner.

The 19-year-olds were among the 1,189 specialist cadets who graduated from the Specialist Cadet Course on 20 Aug.

In the light of the COVID-19 situation, the graduation parade was modified to adhere to strict safety rules. The cadets received their bayonets in small-scale indoor parades held by their respective vocational Training Institutes at various locations such as the Nee Soon and Pasir Laba camps, and RSS Singapura - Changi Naval Base.

Up to 40 people were allowed at each session, with larger cohorts performing the ceremonies in waves. All personnel present wore face masks throughout the event, and maintained 1m safe distancing between individuals and 2m distancing between rows.

Graduands listening to the recorded video message by reviewing officer Dr Janil Puthucheary, Senior Minister of State for Health and Communications & Information, at the graduation parade held in Changi Naval Base.

3SG Arun and 3SG Varun were in the same company for Basic Military Training (BMT), and were later posted to the same "boat" for the first six weeks of specialist cadet training with the Navy. A "boat" is the equivalent of an Army section.

"We got to see each other almost every single day. We could spur each other on, talk to each other if we wanted to," said 3SG Arun.

Proud father of 3SG Arun affixing the 3rd Sergeant rank chevrons on his uniform. This was done at home in the light of the COVID-19 situation.

Their family was also a pillar of support. Their father would fetch them from Changi Naval Base to their Bukit Panjang home on Friday evenings when they booked out. And as far as possible, their parents would call them daily to ask about their day.

"When we're having a difficult day, it always makes your day a little brighter whenever you get a call from the family," said 3SG Varun.

Then-Privates Varun (second from left) and Arun with their proud parents at their BMT graduation parade.

During the 22 weeks of training in the Specialist Cadet School, they not only learnt to be sailors, but also became tougher. 3SG Arun overcame his fear of heights when he successfully jumped from a three-metre-high diving platform.

The three-metre jump prepares sailors for emergencies on board ships when they might have to jump into the sea from similar heights. [Screengrab: RSN]

3SG Varun, on the other hand, learnt to handle the stress from the high tempo training. Trainees were tested on their skills and proficiency as often as three out of five days in a week.

"You always have to be on top of your (course) material, your skills and have a grasp of what you're being taught, because assessments are always around the corner," he said.

Thankfully, his course mates always helped one another, and the instructors were patient and understanding. 3SG Varun added that he learnt the importance of teamwork and communication during training in the Specialist Cadet School.

Whether it's operating weapons or conducting firefighting drills on board a ship, sailors have to work together and communicate clearly in order to operate effectively, he explained.

He is looking forward to putting his training to good use when he reports for duty on RSS Vigilance, a Victory-class missile corvette.

Likewise, 3SG Arun is looking forward to playing his part in defending his country.

"Because a large proportion of our trade occurs through the sea routes, protecting our sea lines of communication is vital to our continued economic prosperity. So after learning this, I've developed a greater sense of purpose in serving the Navy," he said. 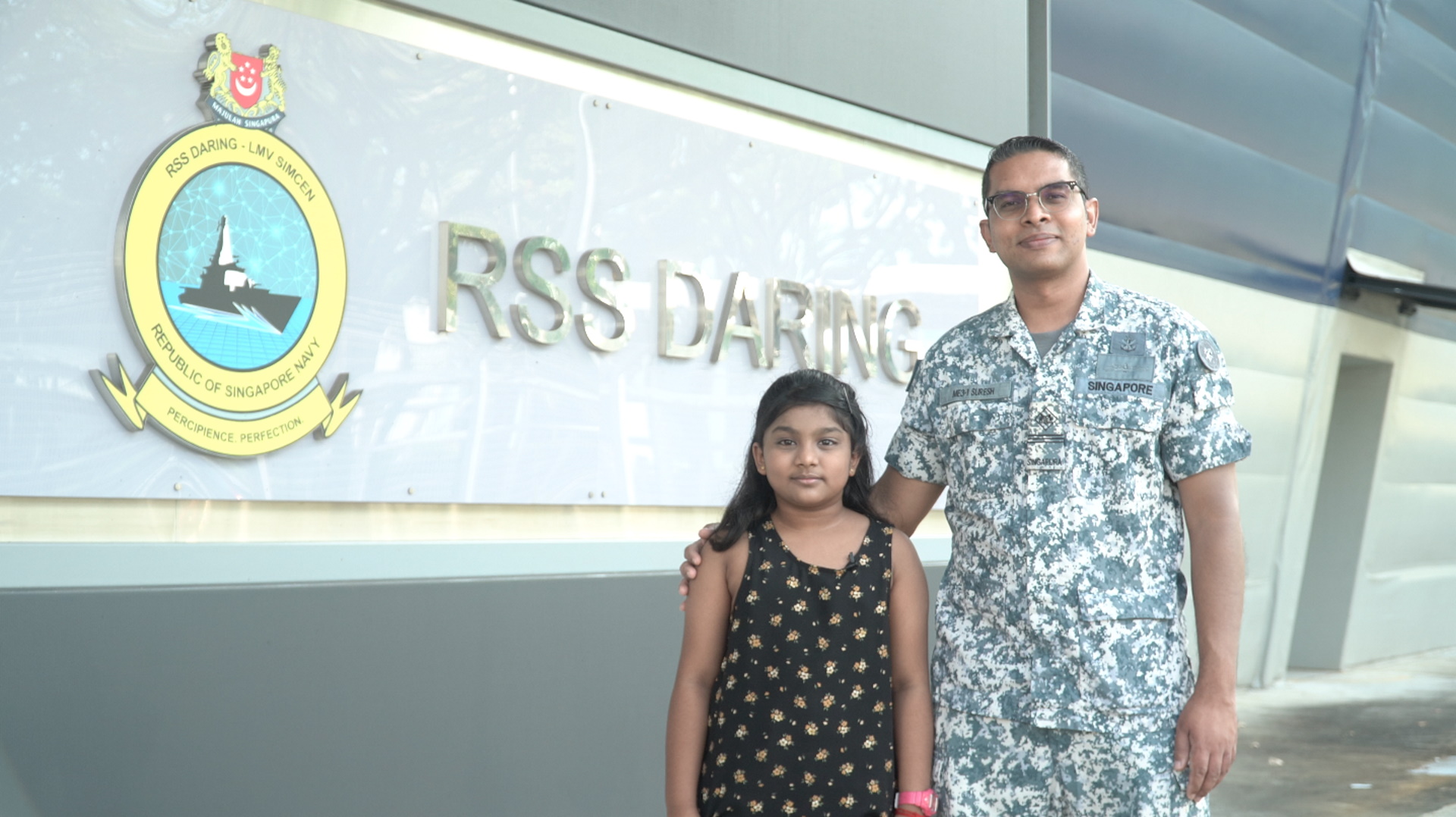