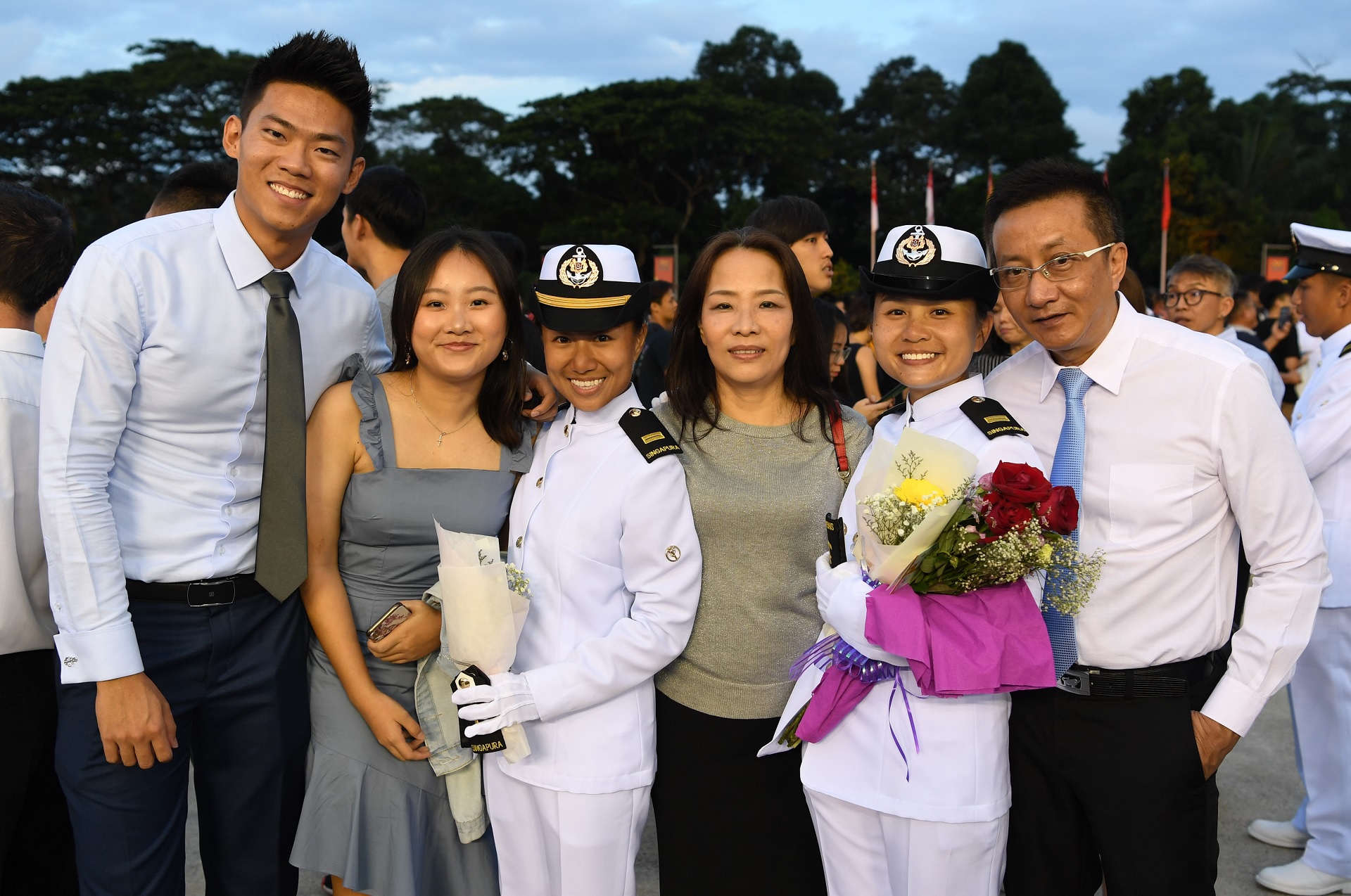 All in the family for new SAF officers

"If your bank account is full but your heart is not, then what's the point?"

This was the point made by Lieutenant (LTA) Emily Kwek. A year ago, both she and her sister LTA Felicia Kwek were searching for more in life than climbing the corporate ladder.

LTA Emily, 29, had grown jaded with chasing ROIs (Returns on Investment) in a multi-national company while LTA Felicia, 23, struggled to find purpose while interning as an undergraduate at an ice cream company.

"I started thinking, what job can give me this meaning and purpose that I'm looking for?" said LTA Felicia.

In the end, they didn't have to look far to find the answer – the sisters remembered the stories their mother had told them about her time in the Republic of Singapore Navy (RSN).

Madam Katherine Chan, who spent six years as a WOSpec (Warrant Officer and Specialist) in the RSN, had sailed on a Missile Gun Boat.

Seeing their mother's passion for the Navy made following in her footsteps a  natural choice for the sisters. But what made them certain of their decision was witnessing firsthand the Navy family spirit that their mother had always told them about.

"I wanted a job where everyone is like family. In the Navy, you're forced to work together to operate the whole ship (because) no one can know everything. So it's nice to see how everyone is willing to help each other," said LTA Felicia.

For example, she was heartened to see her crew jump in to help her with tasks like putting on her fire-fighting suit during training even though she was the most junior on the ship.

As for LTA Emily, who clinched the Sword of Honour and Best in Knowledge awards, she has found purpose in taking the torch from her mother.

"It's about passing the Navy family spirit down from generation to generation. After seeing how everyone helps each other, I'm determined to do the same so that my juniors can have a good learning experience."

"It's something that was passed down from my mum's generation, and I hope it will not die out."

On 15 Jun, LTA Emily and LTA Felicia's proud mother and father (who was a National Serviceman in the Navy) looked on as they were commissioned as officers.

They were among 359 officer cadets who received their epaulettes in the presence of their families and loved ones at a commissioning parade held in SAFTI Military Institute.

Speaking at the parade, guest of honour Senior Minister and Coordinating Minister for National Security Teo Chee Hean reminded the new officers of their role as leaders in guiding and protecting the men under them.

"Lead by example through your character and competence. Engage and inspire them. Care for them. Keep them safe. Build strong teams that will fight for one another, and look after one another."

"As an officer, you really need to understand everything that's going on with your men. It's (about) having the right attitude of wanting to lead and wanting to care," said the 21-year-old infantryman.

The Sword of Honour and Best in Knowledge recipient had his family to thank for helping him through the physically and mentally difficult times. He shared that he became closer to his parents after enlisting, and was thankful to his mother for always providing a listening ear.

"My parents are quite old and not well-versed in things like (the awards I received). But when I shared the good news with them, they could see the smile on my face. They were really proud. They said: 'As long as you know you did your best, that's all that matters.'," he said.

As for 2LT T Daranidarran,19, he found an extended family in his buddies from Basic Military Training (BMT) and OCS. He had returned to Singapore alone from India, where his father was working, to serve his National Service (NS).

Although living abroad and often moving meant he could make friends easily, learning to live in Singapore was still no walk in the park.

"It was quite challenging, for someone who's been living outside Singapore, to understand the accent and slang… And because I hadn't really interacted with many people from different races, I wasn't really sure of what to expect. But as time went by, I learnt…to interact quite well with everyone."

He now has a close group of friends whom he credits for helping him in his training as an Air Warfare Officer – Ground-Based Air Defence.

He recalled an incident: "I'm really bad at remembering numbers, and when it comes to system knowledge, we have to memorise a lot of numbers. So what my friends did was test me about it over lunch – we worked on each other's strengths and weaknesses."

And on this day, he became an officer in the presence of both his old and new family.