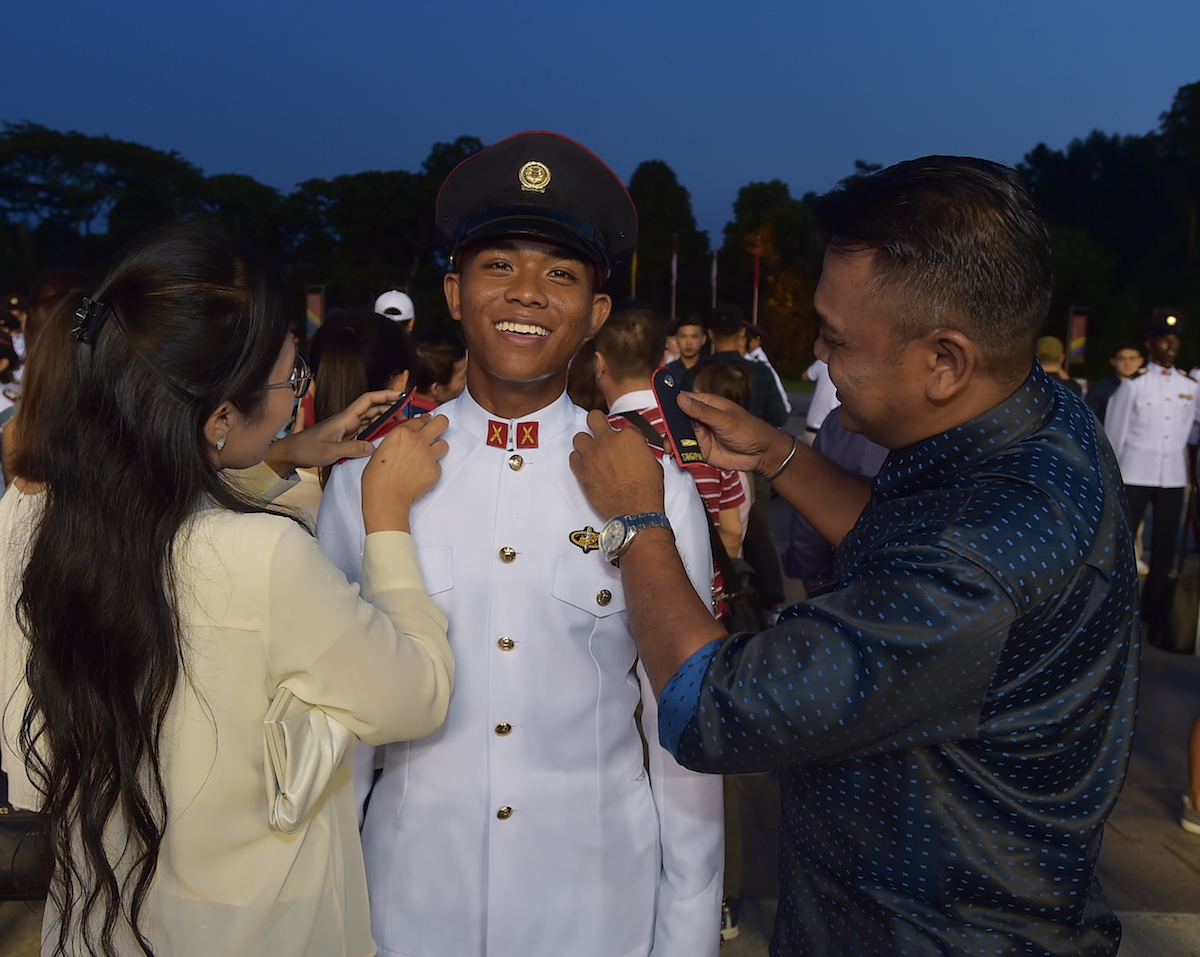 From losing weight to leading men

Having been obese since young, his goal for National Service (NS) was to lose weight and get fit.

With the help of his section mates, 2nd Lieutenant (2LT) Alfian Noorhaqim bin Rahmat persevered in his diet and training and eventually lost close to 20kgs from his 89kg frame by the end of Basic Military Training (BMT). He also did so well that he was selected for further training in Officer Cadet School (OCS).

"I got into OCS because of my BMT buddies, they were a positive influence on me and that motivated me to do my best," said the 21-year-old.
During his course at OCS, 2LT Alfian signed on with the Guards formation, a decision he attributes to his positive interaction with his buddies.

"It motivated me to want to make a difference in others' life by putting others first as their leader. And I felt that the SAF (Singapore Armed Forces) is a very good platform to do so.

2LT Alfian was among the 160 cadets from the Army, Navy and Air Force who were commissioned as SAF officers, after 38 weeks of training. He also received the Sword of Merit award, an accolade given to the top 10 percent of the graduating cohort.

The commissioning parade, held at SAFTI Military Institute on 17 Mar, was reviewed by Minister for Communications and Information Dr Yaacob Ibrahim.

Addressing the officer cadets, Dr Yaacob said: "Singapore and the SAF will need to continue to have forward-looking leaders in order to anticipate challenges and safeguard Singapore from diverse and complex threats.

"As commanders, you will lead men and women who come from diverse backgrounds, with different beliefs, priorities and concerns. We count on you to build strong, cohesive and capable teams."

"I'm not very vocal and I find it hard to raise my voice to direct my mates," said the Fulltime National Serviceman. So he found other ways to lead by encouraging his fellow cadets and helped to lighten workloads by taking on more tasks.

"(This approach worked), throughout the course all of us stepped up to help each other." The 21-year-old will go on to serve with the Republic of Singapore Air Force as a Ground Based Air Defence (GBAD) Air Warfare Officer.

Also earning her epaulettes was Lieutenant (LTA) Teh May Yong, who made a career switch to join the Navy after a short stint as a podiatrist.

"I've always watched naval-related movies and had a strong interest in the Navy. Even when I was at my day job I kept thinking about signing on. I want (to be part of) the adventure," said the 25-year-old.

A former national runner from the Singapore Sports School, LTA Teh was the Best in Physical Training among the naval officers in her graduating cohort.
Despite her fitness, LTA Teh almost didn't make it through the tough midshipman training as part of the naval officer course - sleeping as little as three hours each night. She also suffered from seasickness during the four-week sail.

"But whenever I wanted to give up, I would always think of the end goal: that I want to be a naval officer."