Five things to expect from season 2 of When Duty Calls

The Channel 8 military drama is back with more action, romance, heartbreaks, laughter and tears than before.

The cast of When Duty Calls 2 at the press conference; the show will be aired from 15 Aug.

Has it been that long? After a five-year break, your favourite (if not, only) local military-based drama When Duty Calls is back for a second season.

When Duty Calls 2, or 卫国先锋 2 (Wei Guo Xian Feng 2), is a MediaCorp production in collaboration with the Ministry of Defence, commemorating 55 years of National Service (NS55).

The mandarin series stars local celebrities Desmond Tan, Paige Chua, Felicia Chin, Pierre Png and Kym Ng; and will be aired on Channel 8 from 15 Aug. MediaCorp gave a preview of the show's highlights as part of a livestream of a press conference on 3 Aug, attended by cast members.

Here are five of your questions answered about the upcoming drama:

Desmond Tan reprises his role as 3rd Warrant Officer (NS) Loke Jun Guang, a self-employed baker who serves as an Operationally-Ready National Serviceman in an Infantry unit. His love interest Lieutenant Colonel Sim Yi Xuan (who had the rank of Captain in Season 1), played by Paige Chua, is also back – as commanding officer of a Landing Ship Tank.

Tyler Ten (seated, left) and Nick Teo (right) are new faces this season. Their characters find themselves in a love triangle with Felicia Chin's (centre) character ME2 Peh Jing Yu.

They are joined by new faces Tyler Ten, who plays a Regular from the Army Deployment Force, Nick Teo, who plays a Super Puma pilot and Joel Choo, who plays an engineer from the Defence Science and Technology Agency.

It is Jing Yu's last exercise with the Infantry unit before she heads over to the Army Deployment Force and meets Chan Oon King (Tyler Ten).

The on-screen mission is in fact inspired by Operation Flying Eagle, a HADR mission that the Singapore Armed Forces took on following the 2004 Asian tsunami.

While packed with action and realistic operations, no drama is complete without romantic tension and love triangles – and When Duty Calls 2 promises to deliver on those fronts.

In case you're lost, here's a chart on the web of relationships in the latest season.

"Despite all the tough training we had to go through for the show, the love story was actually the hardest to film – because our characters' relationship went through so many obstacles," said actor Desmond Tan during the press conference.

In the meantime, Jing Yu sees a different side of her military rival Oon King when they take part in the HADR ops together and grow close. But just as she realises she has feelings for him, her best friend Apollo confesses his feelings to her.

While Season 1 ended with Jin Bao and Mei Guang (Kym Ng) getting married, this season shows their struggles in trying to conceive.

Desmond Tan (left) and Paige Chua play an on-screen couple who are fighting for the country as well as to save their engagement.

With its fast-paced action and cinematic scenes filmed in actual on-site locations – and even on a naval warship during its sail – When Duty Calls 2 looks right out of a blockbuster movie.

There is plenty of love and laughter to entertain as well. Kym Ng said that she shared an intimate scene with Pierre Png, as part of their characters' efforts to conceive.

"I've always acted as an 'aunty' so I've never acted in an intimate scene before – and this time I was doing all the work instead of Pierre! I never thought I would do this in my career, it was very exciting," she said jokingly.

The 20-episode series will air on MediaCorp's Channel 8 from 15 Aug to 9 Sep, from Mondays to Fridays at 9pm.

For those who prefer to binge, the first five episodes will also be available online on meWatch on 15 Aug. 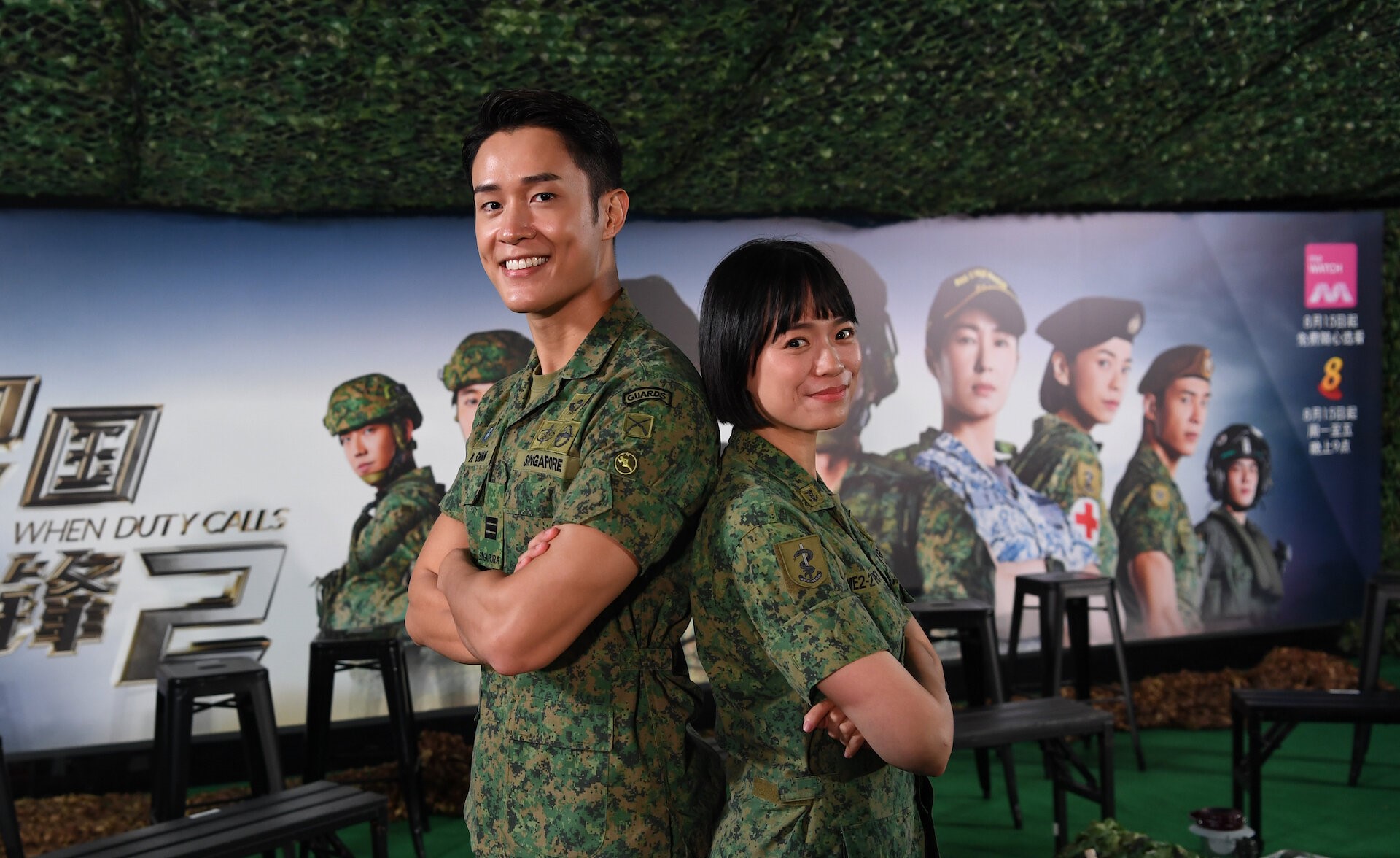