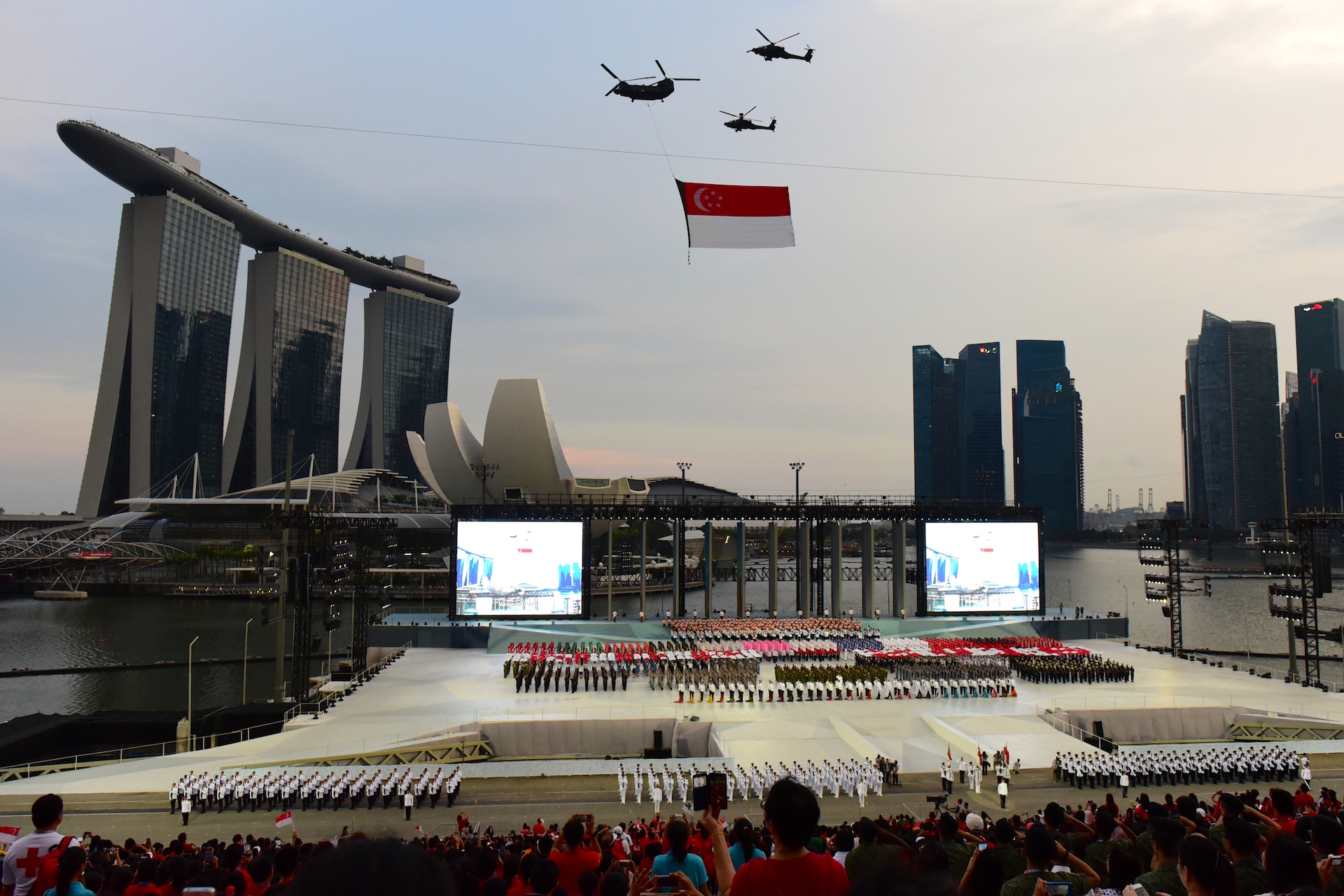 Largest ever aerial display at NDP 2018

This year's National Day Parade (NDP) spectators are in for a visual treat. The Republic of Singapore Air Force (RSAF) will dazzle Singaporeans with an enhanced aerial display and flypast to commemorate the RSAF's 50th anniversary (RSAF50).

Set to be the largest ever aerial display over The Float @ Marina Bay, a total of 26 aircraft from the RSAF will be involved in this year's aerial display and flypast.

This year's NDP Flypast Marshal will be Lieutenant-Colonel (LTC) Benny Lui. Aptly known as "Mothergoose" for NDP 2018, LTC Lui will be in charge of orchestrating the movement and timing of the aircraft during the display and flypast.

"My job is to ensure that the aircraft arrive on time over the show centre for the entire aerial display and flypast," said LTC Lui. "We have to work closely with the parade cue masters. If there is any change in timing, we will be the ones communicating with the aircraft and letting them know whether they are on track.

"One of the key challenges is the weather. We have a constant low cloud base that moves in and out depending on the time of the day. Especially during the evenings, we will encounter varying winds which will affect the movement of the clouds," explained the 49-year-old.

"Certain formations will be flying into the clouds or above it, so it will pose a challenge to me, as I have to judge whether the audience will be able to see the aircraft coming in.

"I will have to make on the spot decisions, to ensure that the audience will be able to enjoy the full aerial display and flypast during this year's NDP."

This year's aerial flypast will comprise four groups of aircraft flying towards the floating platform at different altitudes, separated by 30-second intervals. Look out for aircraft such as the AH-64D Apache Longbow helicopters, Fokker-50, G550 Airborne Early Warning as well as fighter aircraft such as the F-16D and F-15SG.

A highlight of the aerial display: two F-16 fighter aircraft will draw an oblique heart shape with their smoke trails above the Marina Bay area.

Additionally, an F-15SG sporting the special blue RSAF50 livery will perform a series of high-speed manoeuvres before powering through a vertical climb to 8,000 feet (about 2.5 kilometres).

One of the two pilots who will be forming the heart-shaped display is Major (MAJ) Lloyd Lin. This is the second time that the Officer Commanding of 140 Squadron (SQN) is performing in NDP. He previously took part in the aerial display back in NDP 2015.

"It is a challenge to ensure that the shape is symmetrical, with two different pilots each forming one half of the heart shape while performing this manoeuvre," said MAJ Lin.

"Every weekend, we have been rehearsing with each other and attempting different angles and perimeters, so that the heart will appear perfectly against the backdrop of the Singapore skyline."

The RSAF50-liveried F-15SG will be piloted by Captain (CPT) Paul-Matthew Lim from 149 Squadron (SQN). "Timing and coordination with the ground and air crew is very important, as I will have to come in right after the two F-16 pilots finish the drawing of the heart," said the 30-year-old pilot.

"If I enter too late, there would be a long awkward pause, and if I come in too early, I would draw the attention away from the heart."

When asked about the challenges of performing the manoeuvre, CPT Lim said: "The Floating Platform is a small space and it is surrounded by many tall buildings. It takes a lot of precision to perform everything centred over the space so that the audience can see the entire manoeuvre."

"I hope that it will entertain the audience during NDP," said CPT Lim, who started training for NDP 2018 in early-May.

If you miss the aerial display and flypast during NDP, there will be twice-daily aerial displays and flypasts during RSAF50@Marina Barrage on 11 and 12 Aug (starting at 10am and 2pm on both days), featuring more than 20 RSAF flying assets.