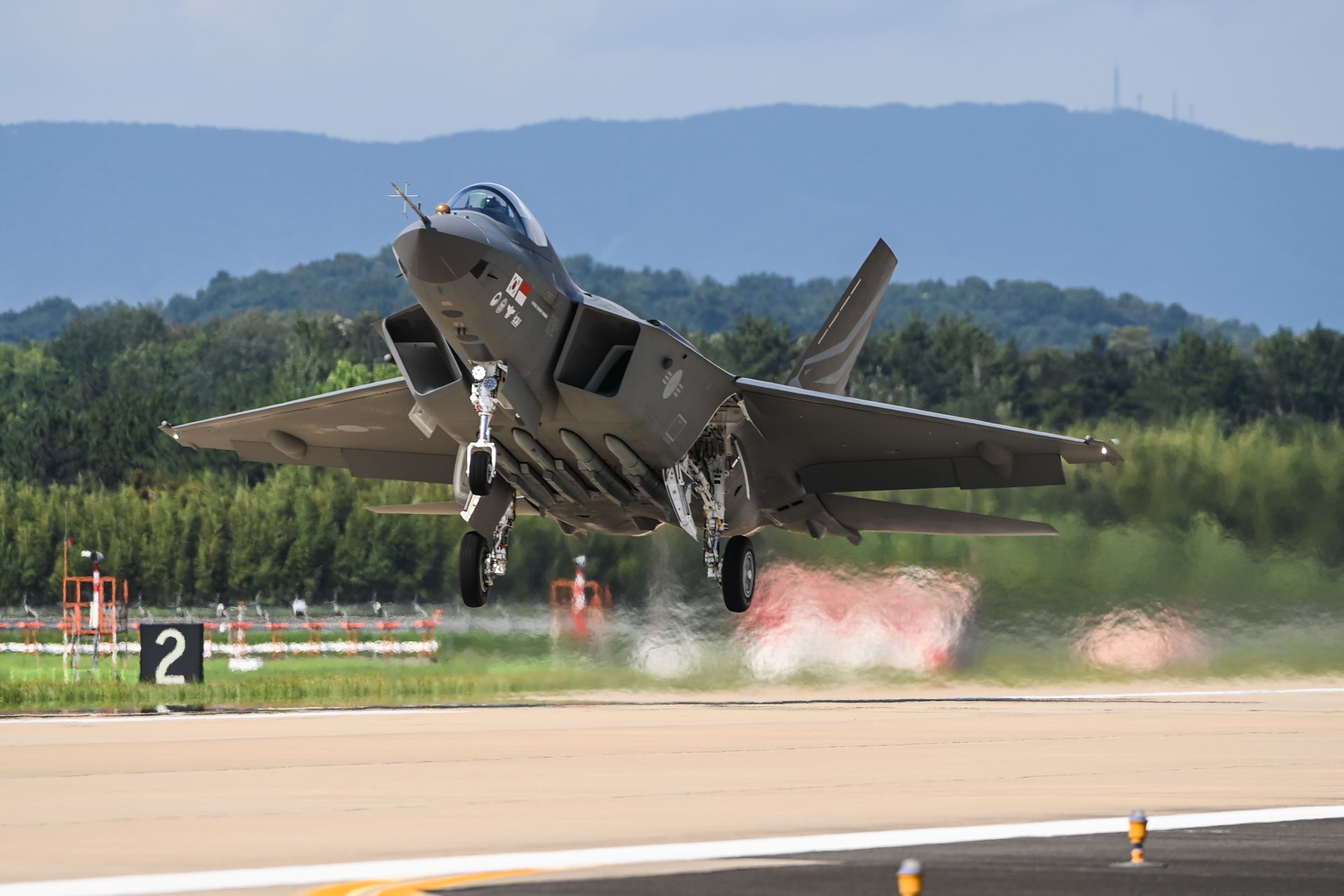 Quick, stealthy and lethal, the hawk is one of the most feared aerial predators of the natural world. The Korea Aerospace Industries (KAI) aimed to develop a new multirole fighter aircraft for the South Korean military with the same attributes.

Development began in 2015 and the first prototype of the KF-21 Boramae (fighting hawk in Korean) was unveiled during a rollout ceremony at the headquarters of KAI in Sacheon Airport in April 2021.

Speaking at the unveiling ceremony of the KF-21 in April, former President of South Korea Moon Jae-In (centre) noted that when the plane completes its final tests, they would be among only eight countries in the world that produces their own supersonic jet fighters. [Photo: KAI]

What makes the Boramae special? "The KF-21 is the first fighter aircraft made with domestic technology, and it indicates that South Korea is now able to build fighter aircraft on its own," the South Korean Defense Acquisition Program Administration (DAPA) said in 2021.

"It will also be a stepping stone to develop better fighter aircraft and operate locally developed arms."

Formerly known as the KF-X, this new fighter jet is powered by twin F414-Ge-400K engines and boasts 10 hardpoints for weapons. Once operational, it is expected to be armed with a range of air-to-air and air-to-surface missiles.

Mr Jung Kwang-san, Director General of the KF-X Program Group from DAPA, said that a double-engine system will not only improve safety levels, but also enhance its combat capabilities.

"Firstly, in the case of one engine stopping, the other engine can bring back the aircraft safely, and secondly, with a twin engine, more arms can be carried," he explained. Mr Jung is a former ROKAF pilot.

The jet will also be equipped with a cutting-edge integrated avionics system developed by the KAI's Systems Integration Laboratory, which amalgamates the aircraft's functional operations together. This includes communication, navigation, identification and armament capabilities.

Besides being equipped with up-to-date armament, the KF-21 is also furnished with data transference capabilities to support joint operations with foreign militaries during international exercises.

Mr Jung added that the KF-21 is also designed for "expandability in continuous performance improvement" to meet the ROKAF's evolving operational demands – just like its predecessor, the T-50 which spawned the development of improved variants like the TA-50 and FA-50.

The KF-21 prototype during its final assembly. [Photo: KAI]

With older generation jets facing obsolescence, like the F-4 and F-5 models, the ROKAF aircraft arsenal will consist of 4th and higher generation aircraft, including the KF-16 (Korean variant of the F-16) which is still in operation.

"(The KF-21's) attack capability, that is, the capability to transport armed weaponry, is much higher than that of the KF-16, so the increase in aerial military strength would be exceptional," Mr Jung noted.

With the successful launch of its prototype in 2021, the KF-21 conducted its first successful test flight on 19 Jul 2022. Further performance improvement tests are scheduled to be conducted, such as the Block 2 additional armed test which would verify its air-to-ground capabilities.

Mass production is expected to begin in 2026, with a total of 120 jets delivered to the ROKAF.

Piloted by Major Ahn Jun-hyun of the ROKAF, the KF-21 completed its maiden test flight on 19 Jul. It flew at a speed of about 400kmh and was equipped with mock-ups of four Meteor air-to-air missiles. [Photo: KAI]

For Mr Jung, the KF-21 is a life project. After leaving military service as a General for the KF-X in 2014, he subsequently took up the KF-21 project as a DAPA official.

"I must accomplish a sure success for this as my life project, no matter what."