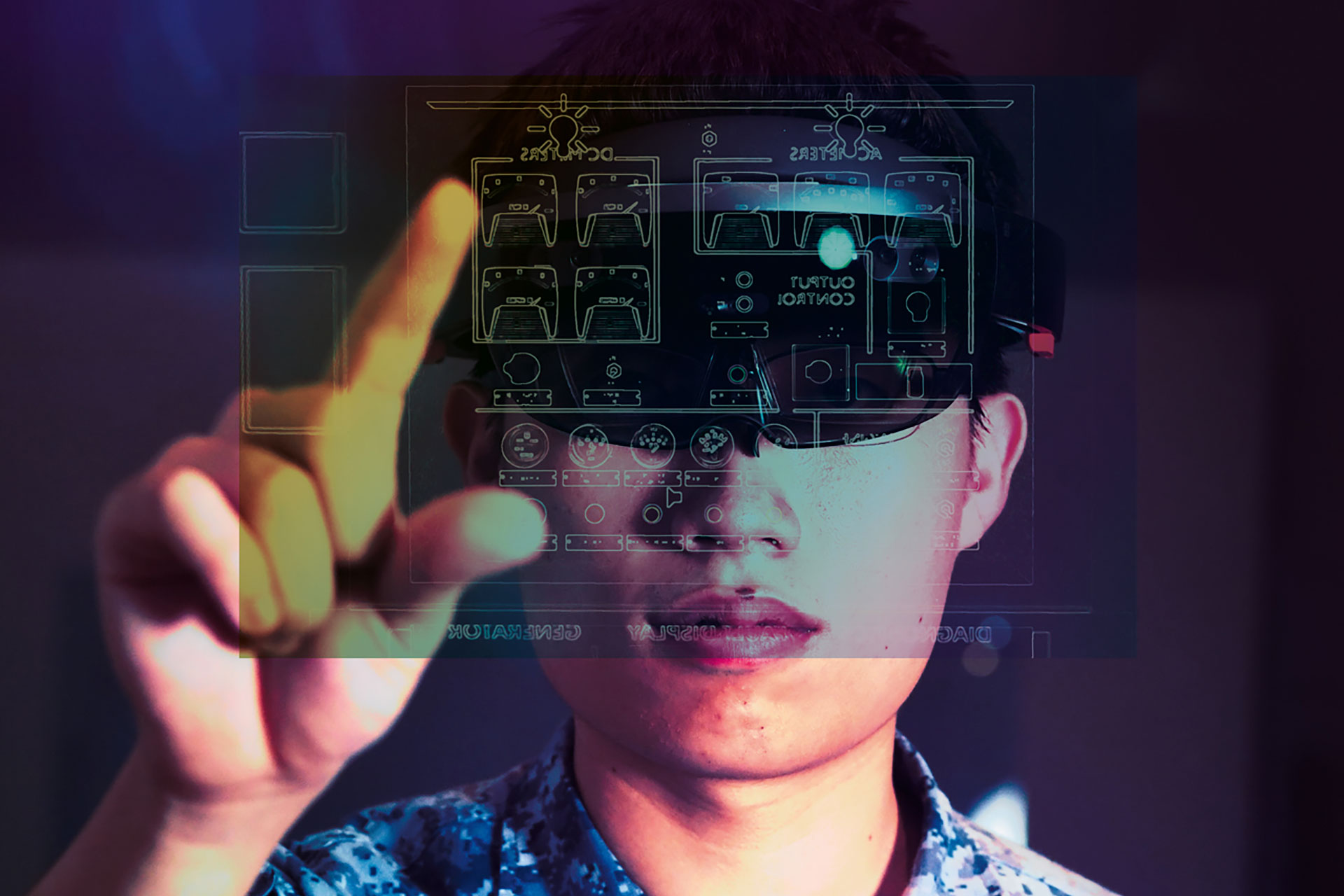 An eye for innovation

Take a peek at two outstanding projects at this year's Digital Innovation Day (held from 9 to 10 May), an event that aims to enhance the National Service experience and training safety by promoting innovation.

With the MR Lens, AFEs can work on a life-sized hologram of actual assets such as the F-15SG’s GPU.
English 华文

THE REALITY OF TRAINING

Part of an Air Force Engineer's (AFE's) job is to carry out complex maintenance procedures on the Republic of Singapore Air Force's (RSAF's) assets. This training can be dull and challenging if the AFEs rely solely on manuals and training aids to pick up the steps. Certain training scenarios, such as aircraft emergency responses, are also hard to replicate in real life.

Enter Mixed Reality (MR) technology — which uses holograms to simulate training scenarios. AFEs who don an MR Lens can train in a realistic and safe environment before they perform their tasks on the actual asset.

How They Did It

Part of an AFE's work on the F-15SG fighter jet includes knowing how to operate the aircraft’s Ground Power Unit (GPU).

With this in mind, a team at the Aircraft Engineering (AE) School in the RSAF's Air Force Engineering Training Institute decided to build an MR courseware on the GPU to make training more efficient.

"The idea was to use technology to ease the learning curve for trainees and let them practise until they are competent," said Military Expert (ME) 3 Marcus Soh, a senior instructor at the school.

MR is the display of virtual items in the real world with the ability to "interact" with them using hand gestures. Using the MR Lens, trainees can work on a life-sized projection of the GPU.

To boost realism, Full-time National Servicemen 3rd Sergeant (3SG) Ho Kian Teck and 3SG Duncan Leo were roped in to do the 3D-modelling and programming respectively. The team also collaborated with 7 Air Engineering and Logistics Group (7 AELG) on the courseware design.

While 3SG Ho modelled the hologram closely after the actual asset, 3SG Leo programmed the model to respond to commands as the actual unit would. The project was completed last September and implemented in the AELG.

The team did not stop there. This April, they will complete the "Safe for Maintenance - Cockpit Settings" trial courseware for the F-15SG. It allows AFEs to go through the procedures and checklist items (more than 80!) that need to be carried out before any maintenance work on the aircraft.

Said the AE School's chief instructor ME4 Tay Lai Heng, who oversees the MR Lens project: "We want to build something useful and provide people with training opportunities to become more competent."

SAFETY AT YOUR FINGERTIPS

A serviceman spots a safety hazard — it could range from an exposed electrical wire to a slippery deck due to an oil leak — and wants to warn others to avoid it. Writing, submitting and disseminating a safety report, however, can be a lengthy process.

A smartphone application, called SafeGuardian, is in the works to allow servicemen to snap a photo of the potential hazard and share it instantly, cutting down reporting time from hours to minutes. The app then informs the relevant responders while alerting other personnel in the vicinity to stay away.

How They Did It

Most commuters should be familiar with using Google Maps to check traffic conditions before deciding which route to take. This concept is similar to the "Danger Zone Alert" push notification function of the SafeGuardian app.

"As I am approaching this hazard, a notification will pop up on my screen to tell me that there is a danger zone," explained Major (MAJ) Sanipher Sin, a staff officer at Naval Inspectorate who is part of the project team building the app.

(From left) MAJ Sin and MAJ Chua are part of the Navy team behind the SafeGuardian app. Conceptualisation began as early as February 2018, while building the app started late last year.

SafeGuardian relies on "danger zones" that can be established by any individual in the base. The Republic of Singapore Navy (RSN) hopes that this crowd-sourcing approach will encourage more people to share safety-related information.

Said MAJ Chua Sheng Hao, Staff Officer at the RSN Strategy Office: "The RSN has a safety ecosystem with safety officers at every level. What the app does is to make this ecosystem even more tightly-knit."

SafeGuardian, which began development in late 2018, will also encourage servicemen to be more forward-looking about safety, added MAJ Sin.

For example, the app also features a "Conduct Activities" function with digital checklists for servicemen to conduct the necessary safety checks before certain activities, such as crane operations when moving heavy objects from shore to ship.

A supervising officer can then countersign on the checks, within the app, to ensure that they were carried out properly. The app replaces the cumbersome paperwork of physical checklists.

SafeGuardian commenced a three-month trial with 400 participants at the Changi and Tuas naval bases this April. The Navy project team is also working with the Army and Air Force to prepare the app to be rolled out to the rest of the Singapore Armed Forces.