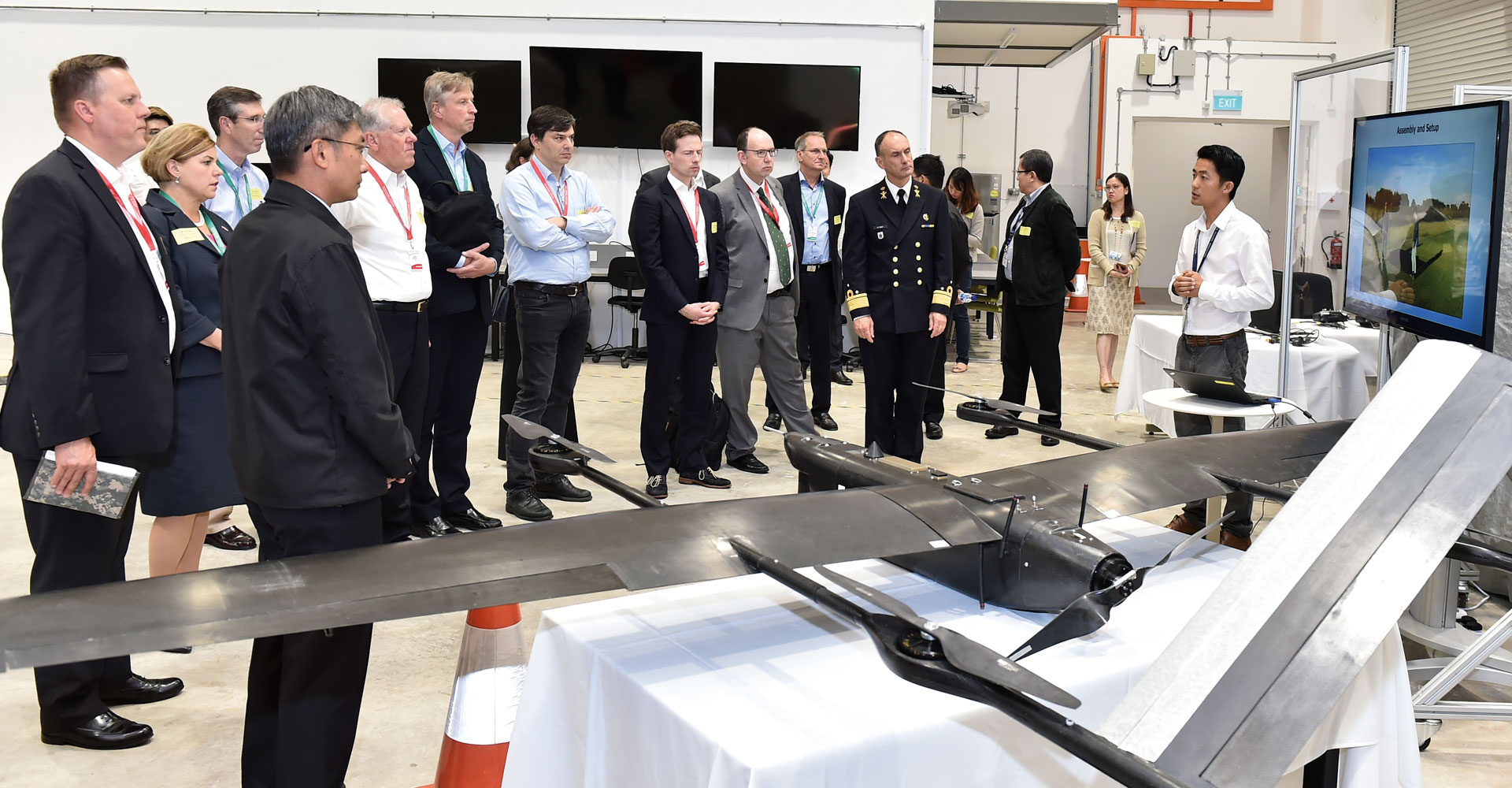 A meeting of defence tech minds

At the first Singapore Defence Technology Summit, international experts look at how the 4th Industrial Revolution will change and affect lives.

Dr Ng speaking at the opening of the summit.
English Melayu

Are we on our way to being replaced by Artificial Intelligence (AI)? Who is responsible when autonomous vehicles attack and kill? How can private and public sectors work together to develop new technologies and defend against cyber threats?

These were some of the questions raised by defence and security technology experts during the inaugural Summit, held at the Shangri-La Hotel from 27 to 29 Jun.

Leapfrogging ahead through collaboration

Inspired by high-level defence summit Shangri-La Dialogue, the Defence Tech Summit seeks to be a platform for leading industry minds to share ideas and explore partnerships.

In his opening address on 27 Jun, Minister for Defence Dr Ng Eng Hen highlighted the importance of joining efforts. "The chances of an isolated group succeeding in discovering or applying new techniques are slim. In game-theory parlance, collaboration is the dominant strategy with greater pay-offs."

The summit opened doors to new collaborations - three agreements were inked on 27 Jun. On the defence front, the Ministry of Defence and the United Kingdom (UK) Ministry of Defence (MOD) renewed a Memorandum of Understanding (MOU) on Cooperative Defence Research for the next 10 years, allowing the two countries to continue collaborating in joint research and technology development, and the testing of defence-related technologies.

"We're trying to have projects where we both bring (our) expertise to the table. In the last 10 to 20 years, Singapore has developed some unique skills in technology in areas like AI and machine learning and autonomy that I think we would benefit from being involved in," said Chief Scientific Advisor to the UK MOD Professor Hugh Durrant-Whyte, who signed the MOU with Chief Defence Scientist Quek Gim Pew.

Governments previously led technological research and development; now, it is carried out by commercial organisations

as well, accelerating the production of new technologies.

In his keynote address on 28 Jun, Deputy Prime Minister and Coordinating Minister for National Security Teo Chee Hean noted its benefits: "Many of these technologies and products can be adapted to meet defence and security needs. They supersede slower-evolving bespoke systems and, thanks to a larger user base, often cost less due to economies of scale."

Summit attendees viewing one of DSO National Laboratories' ongoing projects - the V15 Unmanned Aerial Vehicle (UAV) (foreground) - during a visit to its robotics laboratory. The UAV can take off and land vertically, and can be assembled by two men in less than 10 minutes.

Dr Brian Pierce, Director of the Information Innovation Office in the United States' Defence Advanced Research Projects Agency, agreed. He added that while some technologies, such as neuro-prosthetic limbs for injured soldiers, began as solutions to military-specific problems, they are also useful to civilians, which prompted commercial development.

With the sensitivities surrounding defence technology, Dr Pierce believed that careful customisation is the key. "Often, you can't immediately transfer what's been achieved in the commercial sector to the military setting, because the military has pretty different requirements."

"That's something we're looking at now — how you can take advantage of the commercial (technology and) use it in a way that is secure."

Machines are getting "smarter". For instance, social media sites and search engines are learning users' interests and showing them related content.

Dr Wu (far right), an AI expert, speaking at a break-out session on "Finding the terrorist in big and small data".

While data privacy has become a major concern, the huge amount of information collected and studied can also help in security matters such as identifying terrorists.

"If you don't share any data with society, you are an isolated system. It's a trade-off between efficiency and security, convenience versus privacy or liberty," said scientist Dr Wu Shang at a break-out session on 29 Jun. He is the Head of Research in Singapore and Silicon Valley for Chinese AI company YITU Technology.

About 400 participants from 17 countries attended the Summit to discuss the theme Impact of the 4th Industrial Revolution on Defence and Security. They included policy makers, armament chiefs, defence scientists and thought leaders from academia and think tanks, who traded ideas over plenary sessions and break-out discussions.