SV1 Wall (left) and SV(T) Chika are embarking on a new adventure together as SAFVC Volunteers.
English Melayu

When Chika Imakita's husband offered to coach her in running, she said yes. Soon, the "non-runner" was racing in marathons and triathlons.

So when SAFVC Volunteer (SV) 1 George Wall, 47, told her to join him in the Singapore Armed Forces Volunteer Corps (SAFVC), she put her trust in him again and said yes. Only this time it was an experience beyond her wildest imagination.

"The whole Basic Training was the hardest thing I've ever done in my life! And I've climbed Mount Kilimanjaro, which is a very high mountain for a first-time climber!

"When I came back on the weekend, I told George I wasn't sure if I could go back anymore!" exclaimed 45-year-old SAFVC Volunteer (Trainee) [SV(T)] Chika, who jokes that she was the oldest and shortest trainee in her batch.

The SAFVC is a uniformed volunteer scheme that provides more Singaporeans and Permanent Residents with the opportunity to contribute to national defence, show support and deepen their understanding of National Service. (Visit the SAFVC website for more information.)

It's SV1 Wall's calm and steadfast support that allows SV(T) Chika to challenge her limits. Likewise, her vivacious personality is what pushes him to get out of his comfort zone and chase his passions.

SV(T) Chika: George and I met in 2011, at the Jumbo Seafood in East Coast. My former colleague was visiting from Hong Kong, and asked me along for dinner. George used to play field hockey and had friends in common with my ex-colleague. He came with another girl, so I thought he already had a girlfriend.

SV1 Wall: That was actually another field hockey friend! But I later found Chika on Facebook and began talking to her.

SV(T) Chika: He asked me out for coffee. Then we started running together. He coached me until I was able to complete a marathon. We even went for the Cape Town Marathon in 2012 or 2013. We would usually go for a long run on Saturday evenings and then drinks after that. That's how we became friends.

In 2014, I visited his mother in the United Kingdom (UK), and that was when we began dating officially.

George has always been a very nice and kind person, so nice that I didn't even think he was interested in me at first. As a friend, I could trust him completely. We also have similar values and priorities in life. He is very patient, especially when I get emotional at times.

The couple at a National Day Parade 2019 rehearsal. SV(T) Chika moved to Singapore from Japan in 2005 when her company, UPS, relocated her here. SV1 Wall came in 2008 for work as well, and now runs his own construction consultancy, Asgard Project Solutions.

We heard you have a rather…interesting proposal story!

SV(T) Chika: We were already quite old when we started dating. So after a year, I gave him an ultimatum. I told him: "Here's my speed-dating booking. If you're not gonna propose soon, then we're breaking up!” Then he said: "Ok, I will propose, I will propose!” I "forced” him to propose to me!

He proposed to me in a castle in Vienna, Austria in 2015, during a trip to celebrate my 39th birthday. And then we got married soon after that, because I told him I wanted to be married before I turned 40. We had a small ceremony in Singapore in March 2016 with our closest family and friends.

SV1 Wall: Triathlon is my hobby. That's part of why we love living in Singapore – it's a good place for swimming and running. Pre-COVID-19, we used to go to Desaru in Malaysia to cycle or Bintan in Indonesia to race. In fact, I've signed up for an Ironman race in Spain in May this year. Hopefully we'll be able to travel there to participate.

SV(T) Chika: I've always been fit and did yoga and pilates, but I wasn't this active until I met George. He got me into triathlon. I've competed in Ironman races together with him. I'll be joining him in Spain to support him – supporting is an important job!

The couple at SV1 Wall’s Basic Training graduation in 2019.

How did you end up joining SAFVC together?

SV1 Wall: I remember I first came across the SAFVC ad at a bus stop along Marine Parade! I’d always wanted to join the military – I was in the Army Cadets when I was a student in the UK. But I broke my ankle during a parachuting course for potential officers when I was 17, and subsequently failed the fitness test. I eventually built a civilian career, but this was still very much at the back of my mind.

I enlisted in SAFVC in September 2019 and completed my first deployment as a Security Trooper at Clementi Camp in this January.

Singapore is home, and I want to play a part to contribute to national defence. I’ve also been able to meet national servicemen and understand what they go through in National Service.

SV1 Wall and SV(T) Chika at their respective SAFVC enlistment. SV1 Wall serves as a Security trooper while SV(T) Chika will train to be a Retail Service Inspector.

SV(T) Chika: George definitely inspired me to join. He had influenced me in the past to try out running, marathons and triathlons. I ended up enjoying all of them, and it gave me a sense of accomplishment, so I thought I would give this a shot too. And I trust that something he is interested in would be good for us. Singapore has given me much, and I would like to give back to the nation too.

I applied before George did, but my medical examination took longer, and I also had to undergo additional interviews for the vocation I chose (which is Retail Service Inspector). I just finished my Basic Training in September last year.

The experience has humbled me because I realise that Singapore is peaceful, but it’s not for the lack of effort by the SAF. We also remember not to take for granted the dedication of the people who contribute to our safety.

Did being one of the oldest volunteers deter you from signing up?

SV(T) Chika: Actually, the age limit was an impetus! George knew about SAFVC earlier, but he procrastinated for a long time! He mentioned that he was interested, but years passed and he didn't apply. Finally, I told him, you're 45 this year, if you don't apply now, you're not gonna make it! So it was a good thing that there was a limit because it pushed us to act on it.

SV(T) Chika, did SV1 Wall give you any tips on surviving Basic Training?

SV(T) Chika: George was told not to reveal too much, so that I could experience it for myself! But he did tell me to practise doing push-ups. We also went running with weights, to get ready for carrying the iLBV (integrated Load Bearing Vest) load. He also helped me to iron my uniform and taught me to fold my sleeves.

Serving together in SAFVC has added another dimension to the couple’s relationship, says SV(T) Chika.

What's the best thing about being an SAFVC couple?

SV1 Wall: We get to share tips about the SAF, like how to pack our fieldpacks. But it's difficult when we have to spend time apart for training or deployments, because we're usually always together.

SV(T) Chika: This shared experience and has provided an additional depth to our relationship. We're no longer just your regular couple, we're a couple on a mission to contribute to a higher purpose and serve together. That's bonded us stronger. And it's fun to talk about the funny incidents or our common trainers. The bad thing is that we now have two sets of equipment, which take up a lot of space in the house! (laughs) 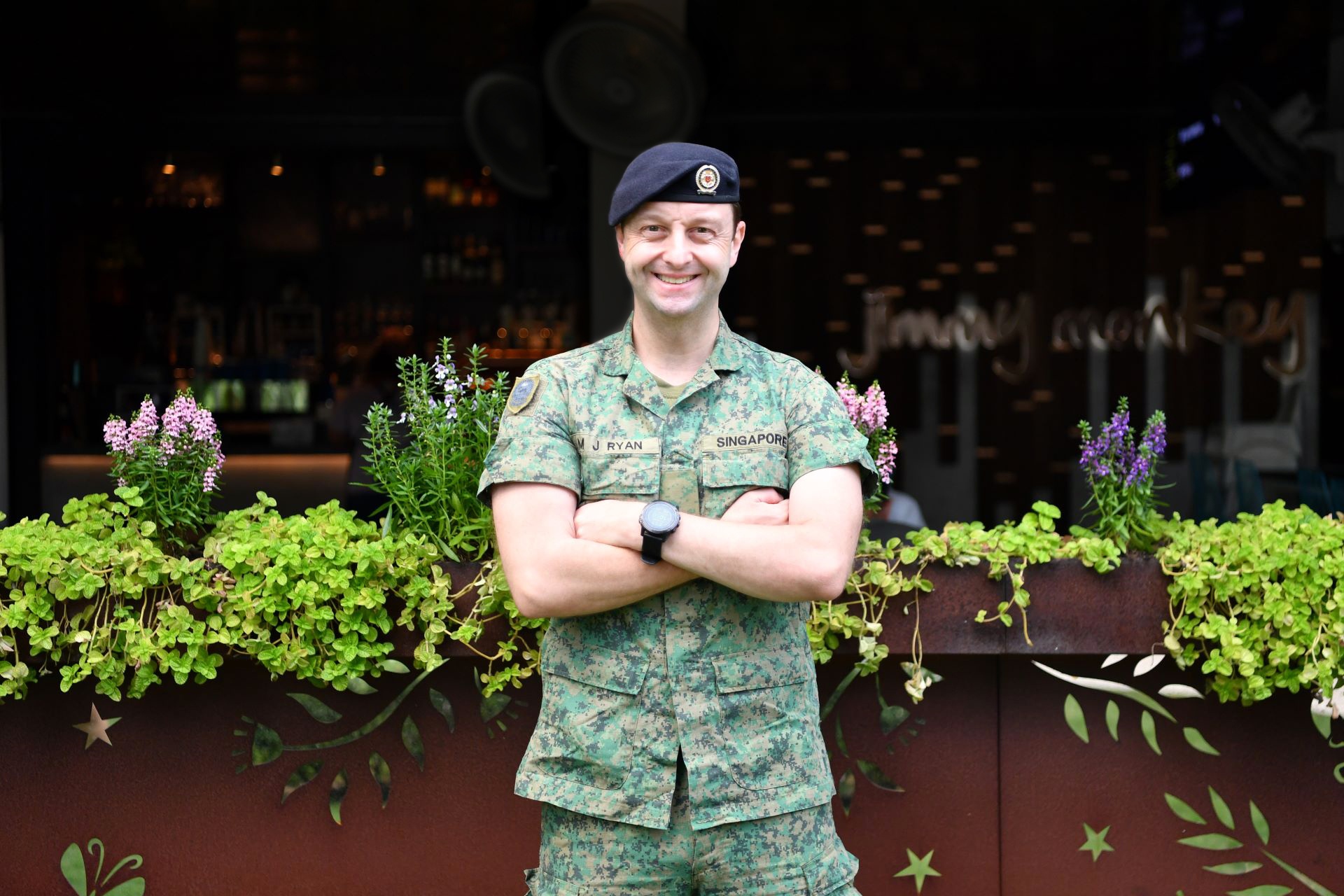 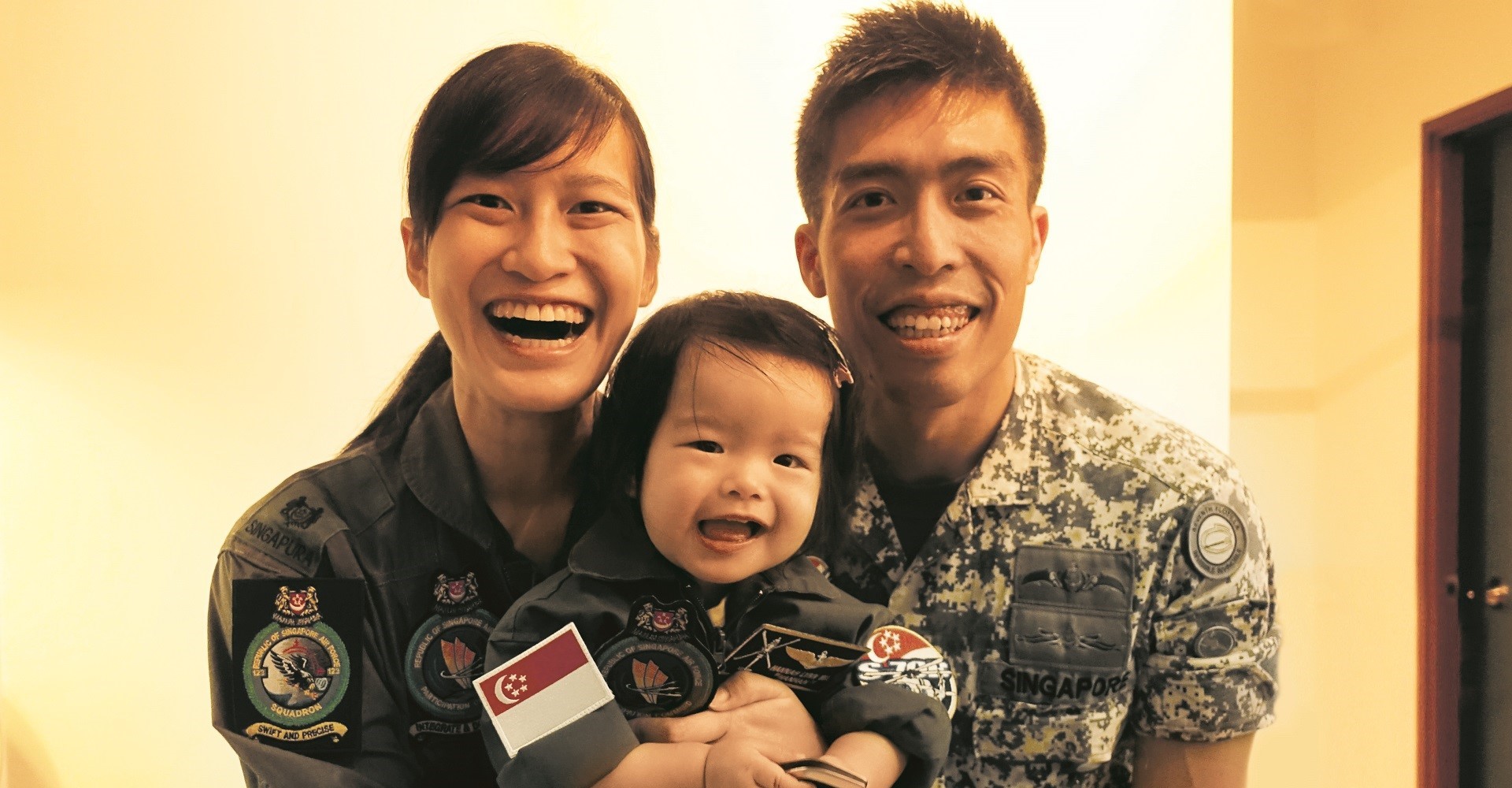 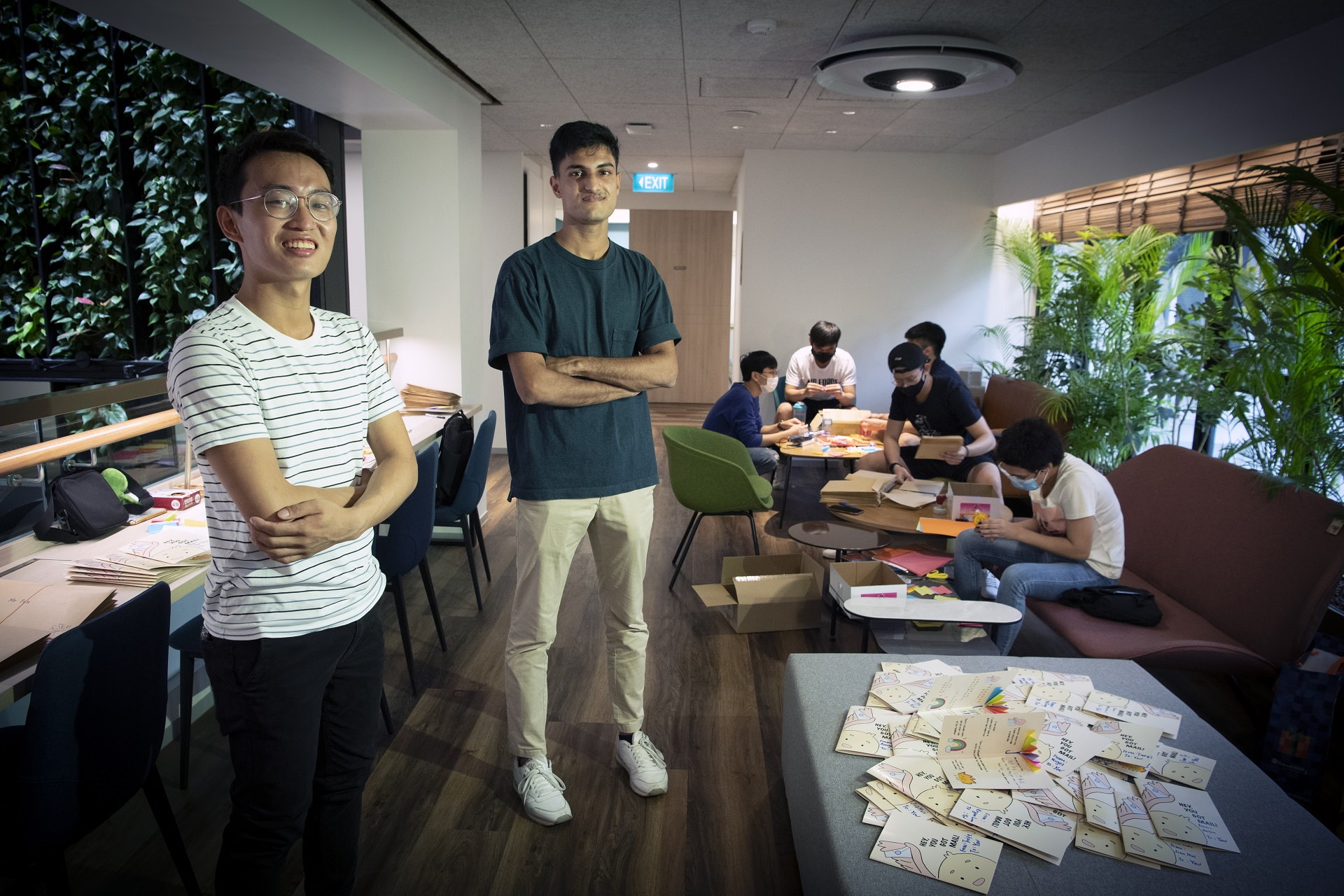 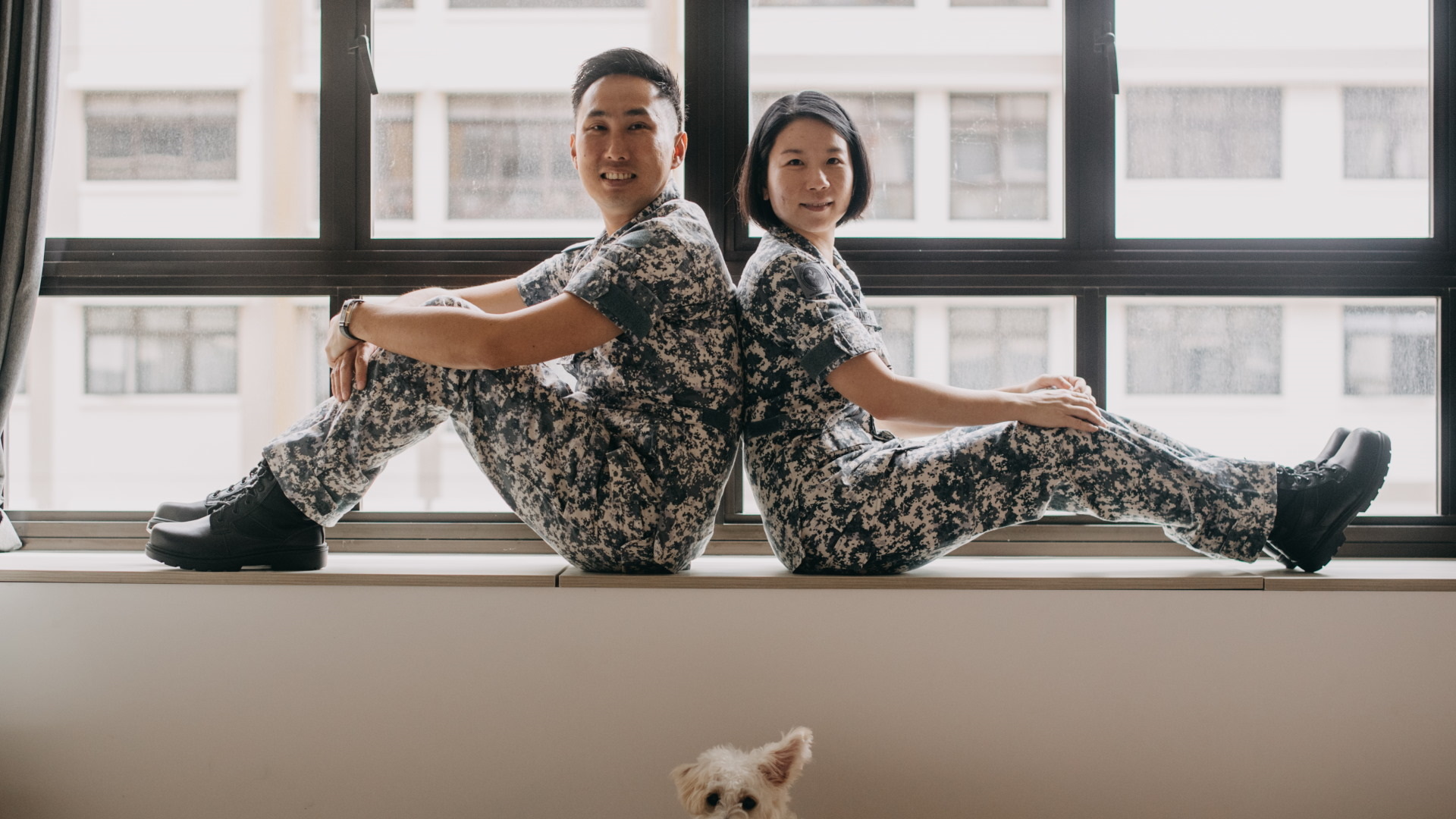