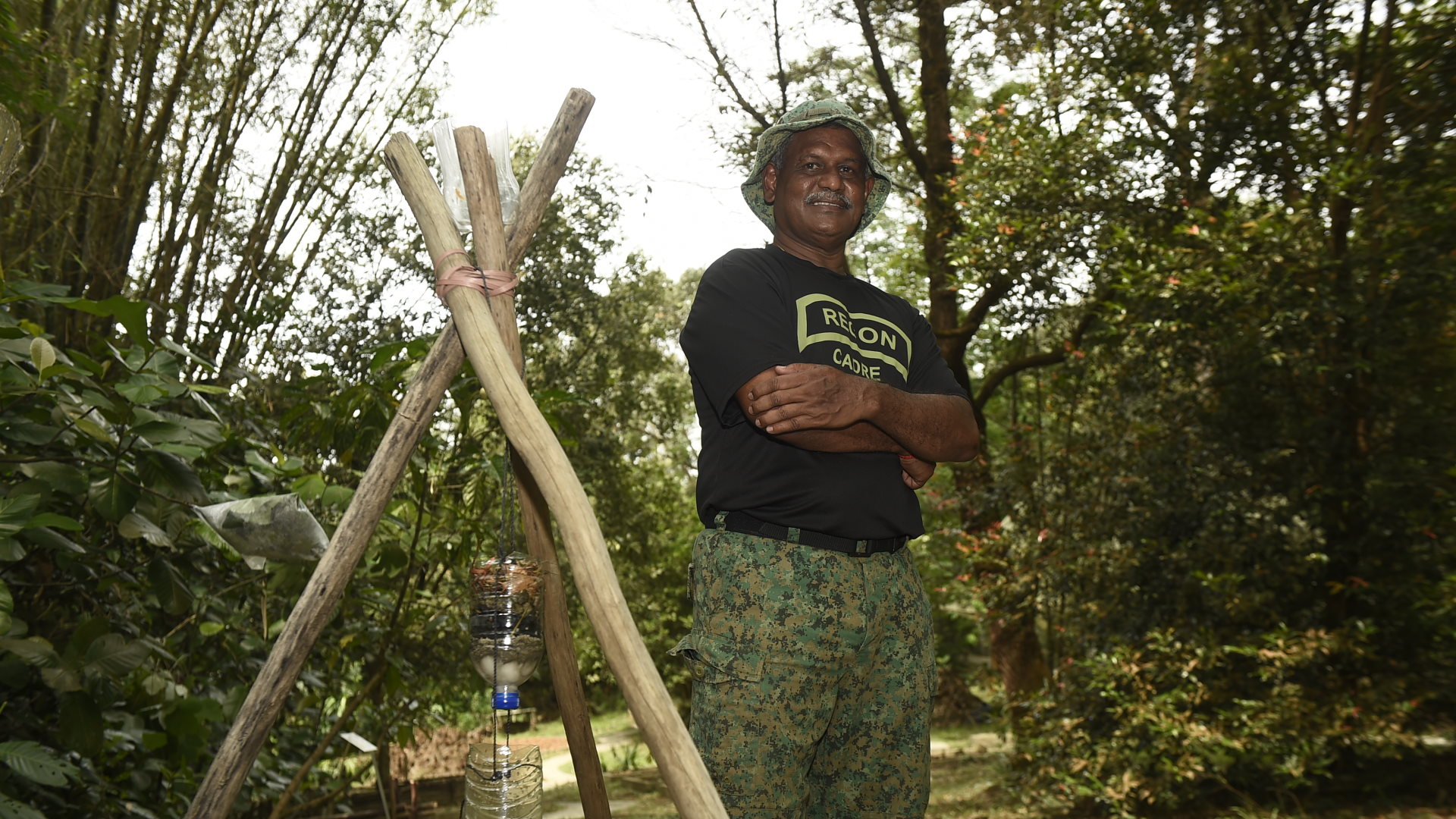 60-year-old with passion for the jungle

He would choose outdoor living over staying in an air-conditioned environment. Meet 2nd Warrant Officer (2WO) Mathialagan "Mathi" S who teaches jungle survival skills in the Singapore Armed Forces (SAF).

2WO Mathi extended his service twice to pass on his knowledge to the next generation of recon trainers at the School of Army Reconnaissance.

He was once stung by bees so badly that he had to be sent to the hospital. Sandfly bites are a norm to him, especially when there is a need to rest overnight near a river.

The heat and discomfort of the jungle does not bother this 60-year-old.

In fact, 2WO Mathi thrives in it and is passing on his jungle survival skills to others as the Chief Trainer at the SAF Military Intelligence (SMI) Institute's School of Army Reconnaissance.

2WO Mathi served as the platoon commander in BMTC's Leopard company in 2003.

2WO Mathi's career in the Army began in 1980 as a Motor Transport Sergeant. In 1984, he decided to join the Commandos (CDO), to be among "the best of the best".

Having been an avid runner in his school days, the physical demands of the role was no issue to him. He served in CDO until 1999.

2WO Mathi then served in the 10th Singapore Infantry Brigade and at the Basic Military Training Centre (BMTC), before returning to CDO as a Ranger Cadre. He was also a jungle training cadre in Brunei for two years, before joining the SMI Institute in 2014.

In 2016, he was ready to retire at 55 but his then-Commander asked him to continue teaching survival skills at the recon school.

So, 2WO Mathi took on a contract for three years, then another two. "The Army made me better in every sense – fitness, learning, working with others. I'm a die-hard Army guy so I gladly extended my time here," he said.

He will finally retire from his 40-year-long service when he turns 60 this December.

2WO Mathi (second row, second from right) along with his fellow jungle cadres in Brunei in 2013. They conducted the Jungle Confidence Course for officer cadets as well as trainees from Guards and CDO.

2WO Mathi admits that his taking for jungle training came naturally. Having grown up as a kampung boy in Sembawang, he spent his childhood playing in the river, climbing trees and picking native fruits like jambu and guava to eat.

He remembers his first jungle course in Thailand in 1985, where many fell sick while trekking through the rain and fending off mosquitoes.

"The terrain was tough but I was okay. As long as I'm wearing my uniform, I don't care about these things."

During his Ranger Course in 1994, his fellow trainee accidentally hit a bee hive, causing the entire platoon to be stung by bees.

2WO Mathi got the brunt of it, sustaining a few bites on his face and head and had to be evacuated to Changi General Hospital. He re-joined the course the next day.

As a trainer in the Army's recon school now, he enjoys showing trainees plants and fruits easily found around Singapore – which he collects the night before their lesson.

"These days, young people grow up in an environment where survival is not instinctive to them. I will show them these things we can eat; and that we can get what we need from the wild."

2WO Mathi explaining plant food edibility to recon trainees at the Survival Training Village in Pasir Laba Camp. He is slowly handing over the reins to younger instructors like SSG Loh (left).

Despite his sturdy build and peppery moustache, 2WO Mathi is far from the scary encik one might expect.

As Staff Sergeant (SSG) Loh Ee Chang, his understudy at SMI Institute, attests: "2WO Mathi's style of teaching is to engage the trainees and make his lessons interactive. He brings the trainees aboard his lessons with his experience and enthusiasm."

"He also taught me to be creative and adaptive to the surroundings and to use each resource in its most efficient way," added the Platoon Warrant Officer.

In fact, the encik is also affectionately known as "Uncle M", a name that his fellow ranger cadres gave him during his CDO days, as he was older than the other trainers.

Said 2WO Mathi: "I don't scold my trainees easily. If I've given repeated warnings and things are still not done, I will raise my voice to alert them. But I hardly do that."

It is such a spirit that he hopes to take to his next endeavour – where he wants to continue teaching others after retiring from the force.

The father-of-one plans to stay close to nature and find work in outdoor adventure training.

"I want to continue moving around, maybe teaching camping and survival to young people. If you asked me to live outfield, I'm good. That's my passion."

Interested to learn more about jungle survival? Get some tips from 2WO Mathi on living off the land here. 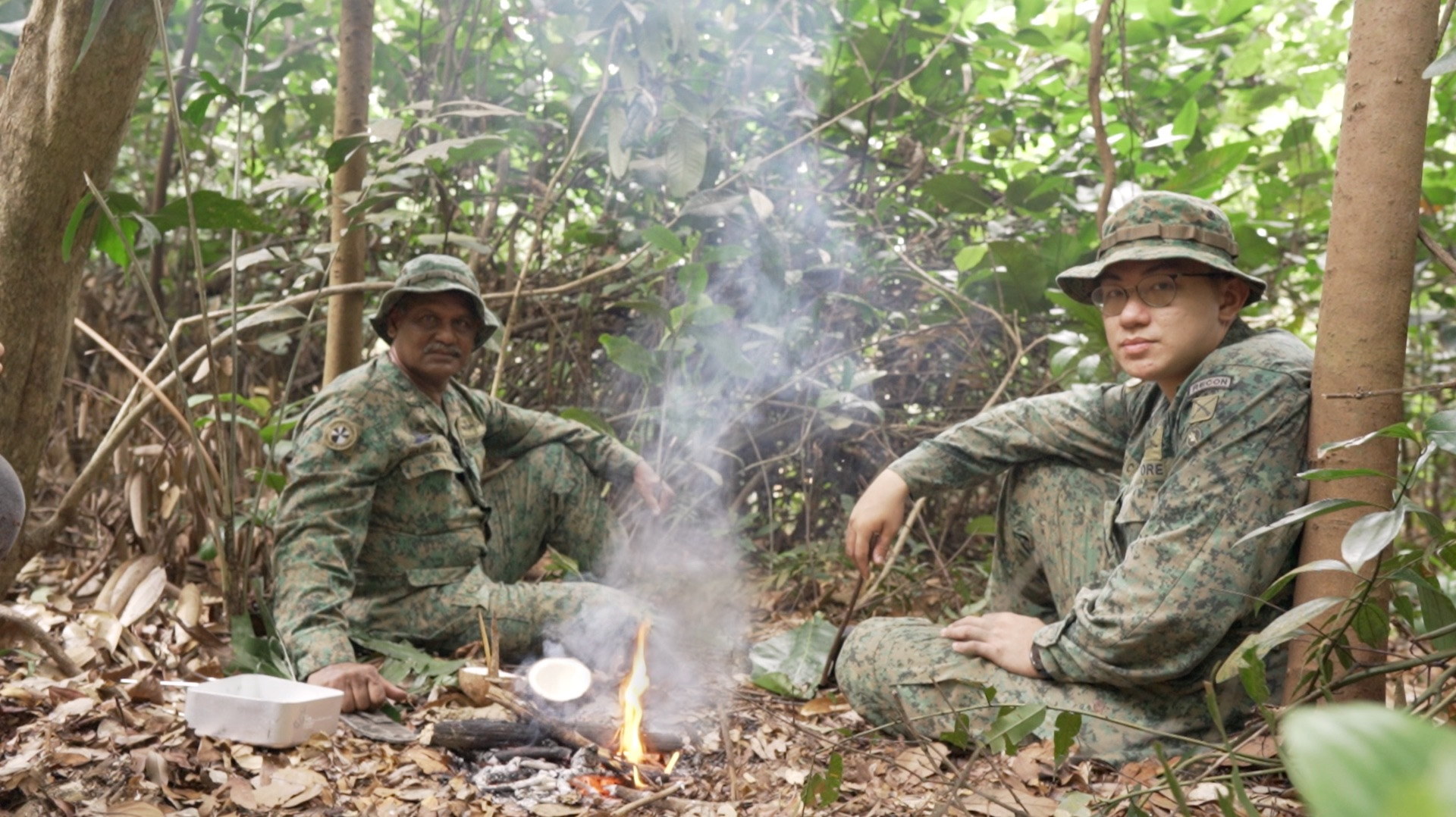 How well do you know your basics when it comes to living off the land? If you are lost and alone in the wild, these four tips could save you. 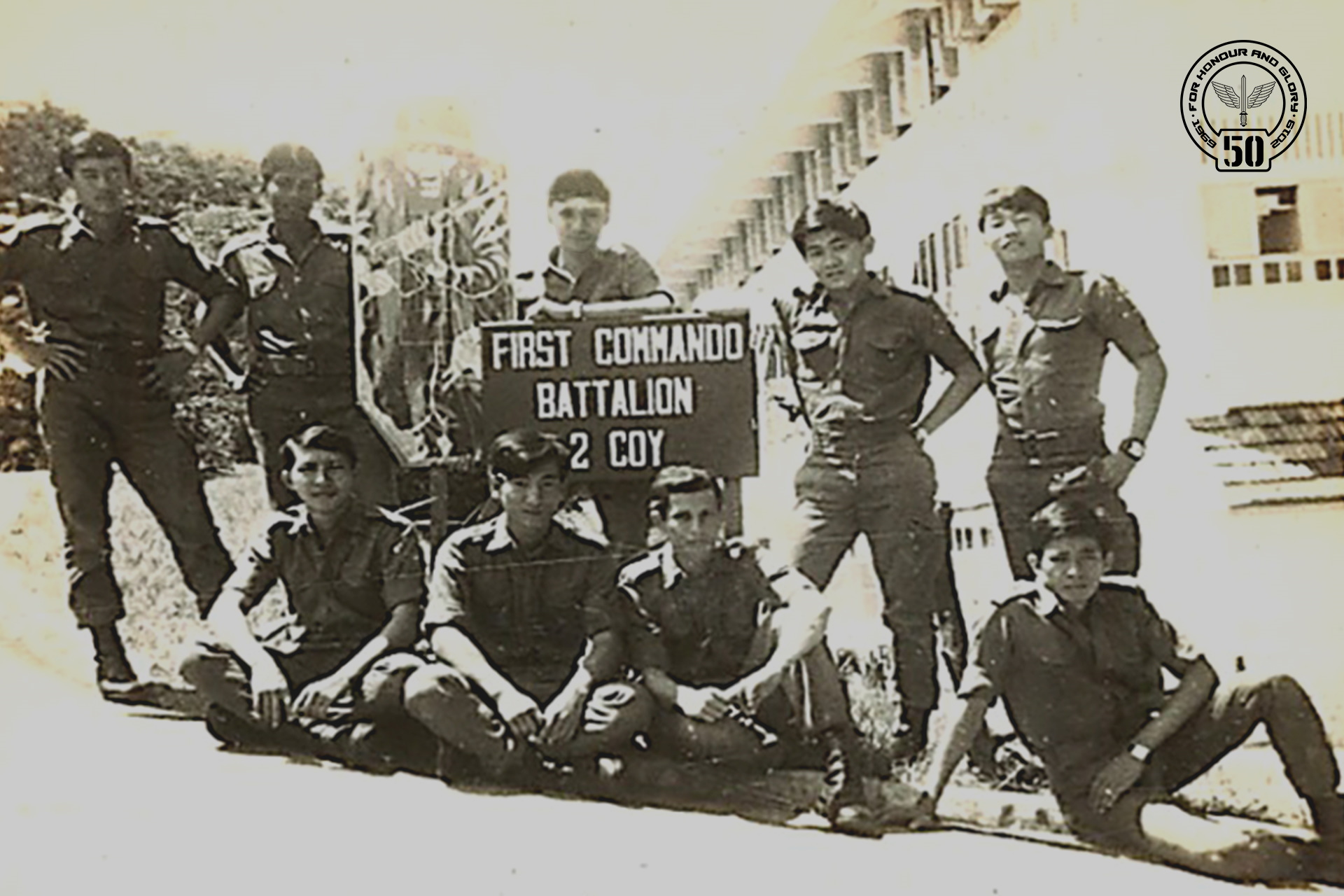