They say you meet people from all walks of life during National Service (NS). After living together in close quarters, you'll probably remain firm friends forever.

Always armed with a wide variety of food, this guy has everything from sweets to crackers stashed somewhere in the bunk. He will make your stomach full and your heart fuller — be his best pal and you'll get to enjoy late-night snacks!

He's the guy who always gets caught off guard whenever your encik demands a "stand-by-bed" inspection. He's also always the one who forgets to bring a certain item needed for training. He might be a nice guy, but you'll probably want to smack him when he sabos (local slang for sabotage) everyone for being two steps behind.

Why are someone else's boots under your bed? And whose crumpled No. 4 is this? Blame the Space Invader, who treats the entire bunk like his own home. This guy likes to lie on the bed, but specifically, on other people's beds. He also keeps chit-chatting even when you just want to be left alone. On the bright side, you'll always have someone to talk to. 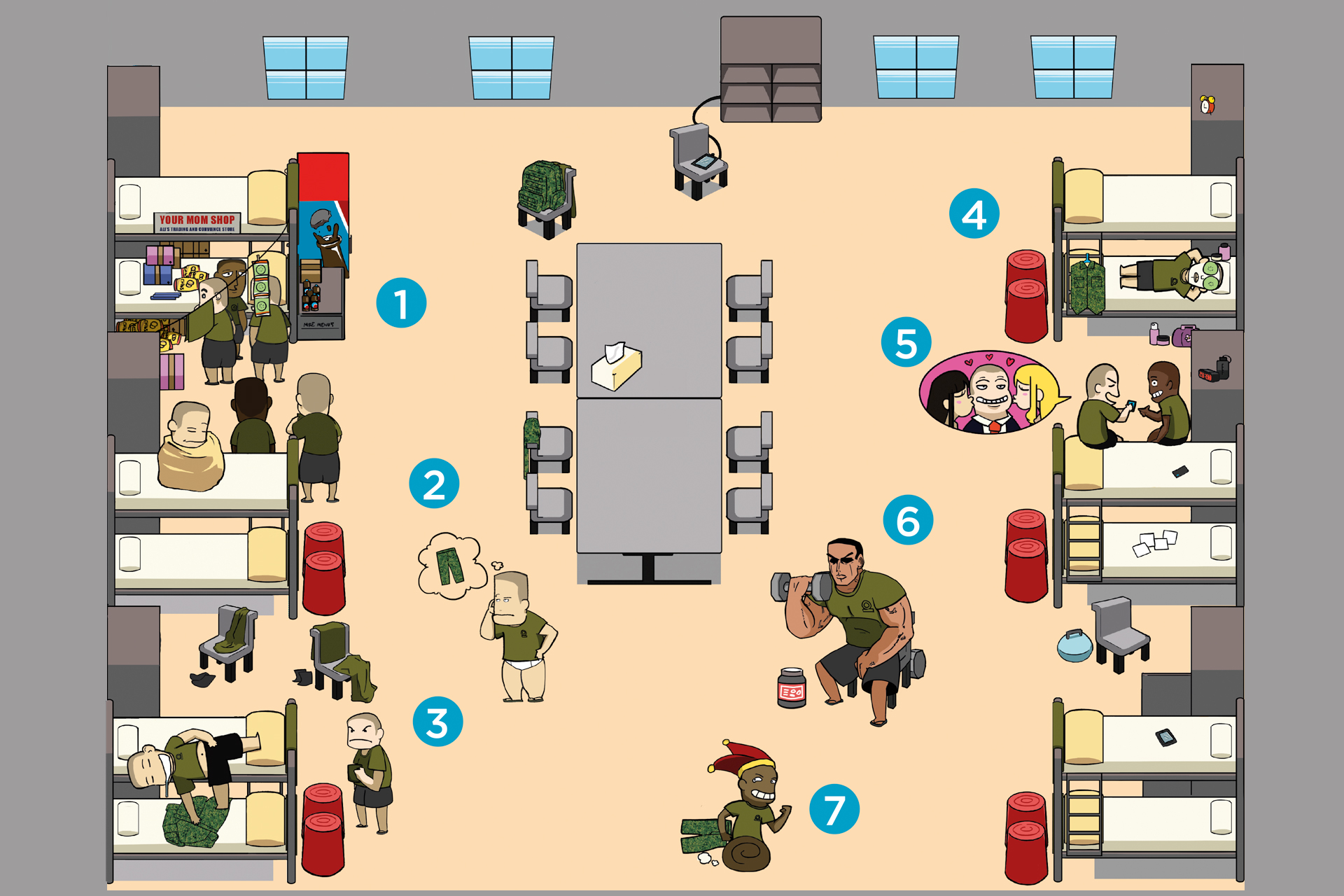 The Narcissist's top priority is taking care of his good looks. Even after a long and draining day outfield, he never fails to wash his face with some high-quality facial cleanser and top it off with a mask. His skincare regime is stricter than your Regimental Sergeant Major. He probably thinks he's the best-looking guy in the platoon, but he's not as popular with the girls as the next guy!

He's the one who is always on the phone texting or chatting up one of his many girlfriends. A smooth-talking charmer who manages to get extra food from the canteen aunty, he has a squirm-worthy line ready for any unsuspecting females in his vicinity. While the Narcissist thinks he's simply the best, the Casanova just wants to get with the rest.

Buff and athletic, the Fitness Junkie always has his top off, flaunting his six-pack abs (even though nobody wants to see them). During free time, when others are busy calling their loved ones or doing area cleaning, he's doing push-ups, sit-ups and planks to maintain his perfectly toned body. Remember, don't make eye contact — there is a 100 per cent chance he will invite you to join his high-intensity workout, and a 90 per cent chance you won't make it till the end.

Forever in high spirits, this bunkmate never fails to crack a joke in any situation — be it during free time or even when the encik punishes the section after failing the stand-by-bed inspection. He might get on your nerves occassionally but you'll be laughing again in no time.