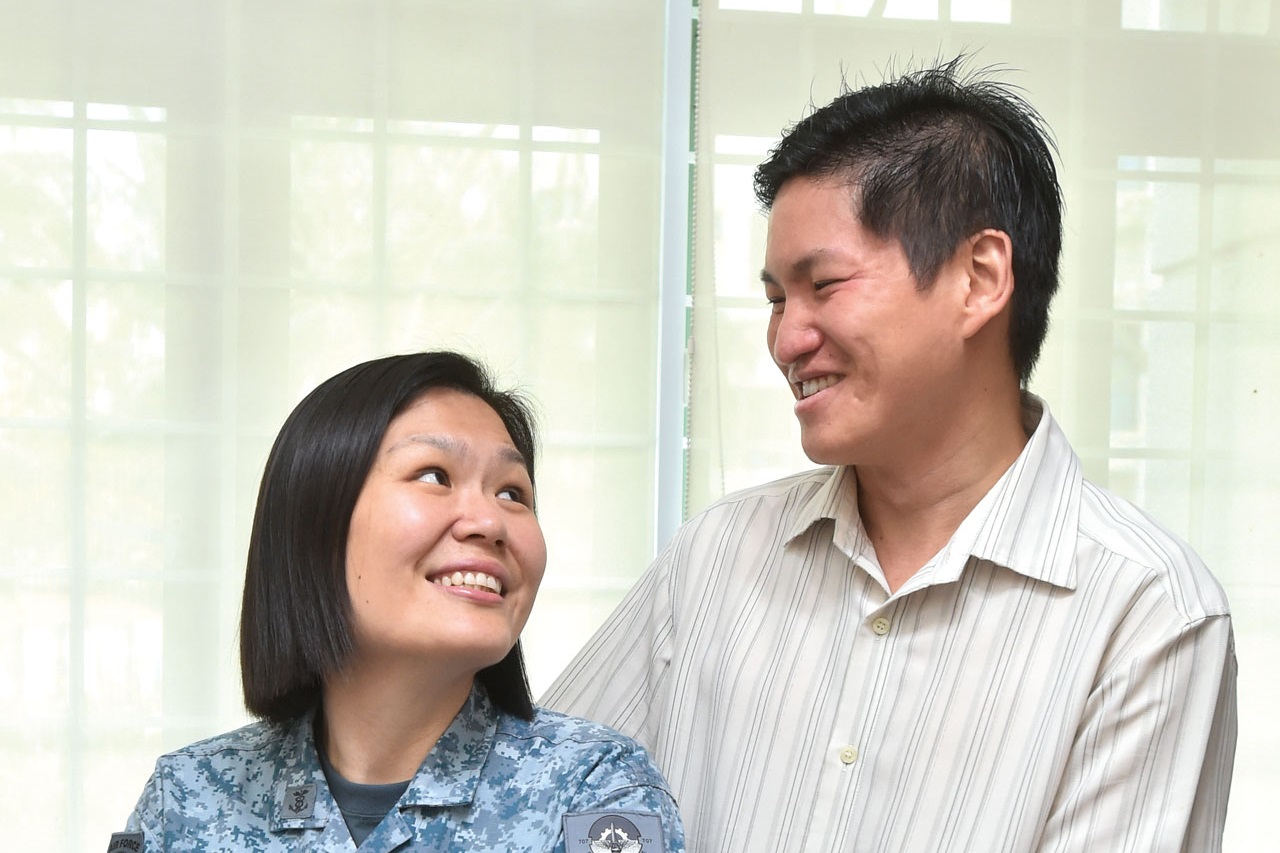 He's got her back

2WO Asrena, CFC (NS) Helmi and their kids at the Army Open House in 2017. She is grateful that he understands the requirements of her job, and helps take care of home when she is away for work.
English Melayu

We've all heard of the term "military wives". But what about "military husbands" — the civilian husbands of military women who hold the fort at home while their wives are serving at the frontline?

PIONEER shines the spotlight on the men behind the SAF's servicewomen.

She's no runaway bride. But Military Expert (ME) 3 Irene Ng certainly did not expect to leave her husband alone at home so soon after the wedding.

In December 2004, just one month after they had gotten married, the combat medic in the Republic of Singapore Air Force (RSAF) was activated to join the SAF's Humanitarian Assistance and Disaster Relief (HADR) operation to provide medical aid to victims of the devastating Boxing Day tsunami.

"Of all her deployments, this is the only one that is still vivid in my mind, mainly because it was so sudden," Mr Lim Yick Chong, 41, recounted.

They decided together that she should go on the mission to help those in need, agreeing that it would be a good, eye-opening experience. But inside, he was a bundle of nerves.

"To be frank, I was a bit worried. She was going to sail on a Landing Ship Tank (RSS Endurance), but they didn't know exactly where they would be going as the tsunami had just hit." Her team was eventually deployed to Meulaboh in West Sumatra.

But his philosophy toward ME3 Ng being on standby 24/7 and getting ready to be activated at the drop of a hat remains the same, 14 years and four children later: "Just do it lah. Life is unexpected."

Adapting & understanding
Ask the Assistant Manager of Technician Training in SIA Engineering Company what's the best thing about being married to a military woman, and he says it's having a meticulous multitasker to manage the home and their sons, aged between four and 12.

However, this also means having to adapt and quickly step up to the plate if his wife has to attend to work matters. "(It's not easy) as…I've always been the spontaneous type and multitasking was never my forte," he admitted.

As the Medical Flight Lead in 707 Squadron, ME3 Ng oversees the medical centre in Paya Lebar Air Base, and sometimes has to attend to medical emergencies after work hours. Large-scale events, such as the RSAF Open House in 2016, can also keep the 41-year-old away from home for long stretches.

But with her husband's help, she can focus on the tasks at hand. "He's very understanding. When I tell him I can't come home because I have to work late or I'm too tired to drive, he will just say, 'Don't worry, go ahead. I will settle the boys and send them to school. You just settle your job.'"

ME3 Ng recalled a difficult time in 2012 when she was involved in a three-week exercise in Australia. The family had just hired a new helper, and she was worried that the helper would not be able to take care of three young boys, all under the age of seven then.

Thankfully, Mr Lim, with the help of his mother-in-law, took over the reins. Besides juggling the kids' tuition schedules and supervising their homework, he managed the household chores and even found time to take the family on outings.

On supporting his wife in her duties, he said: "I've travelled to a lot of countries (for work). Singapore is a safe country (and)....this is one of those things we have to sacrifice to secure this (stability)."

1
2
3
1 Through thick and thin: Mr Lim and ME3 Ng at her Joint Leadership Course graduation parade in 2015.
2 The Lims with ME3 Ng’s mother and helper at the RSAF Open House 2016. Visiting the open house gave the children the chance to learn more about their mum’s work and understand the long hours she puts in.
3 ME3 Ng (left) dispensing medicine to a young girl in a clinic in Meulaboh, as part of the SAF's HADR efforts to help victims of the Boxing Day tsunami.

Stronger as a pair
Mr Lim is not a man of many words. Which is all the more resounding when he says "I think she's brave, braver than I am!" about ME3 Ng taking on tough missions like the 2004 HADR operation.

"In my mind, she's the better half. I think she's more capable than I am, and I'm still learning."

2WO Asrena, CFC (NS) Helmi and their kids at the Army Open House in 2017. She is grateful that he understands the requirements of her job, and helps take care of home when she is away for work.

My wife, my pride

Even though the recruitment ad was from 2017, the clippings continue to take pride of place near the entrance of the flat.

CFC (NS) Helmi, 33, still talks about it excitedly: "I bought the newspaper and showed the ad to all my friends! I also cut it out and displayed it at my workplace!"

There's no denying the pride he feels for his wife. After all, he's watched her career grow from strength to strength since they met in 2006, when he was an NSF Regimental Police and she, a 1st Sergeant in 23rd Battalion,Singapore Artillery (23 SA).

Long distance love
Theirs is a love story that has literally gone the distance.

Back in September 2008, they had to spend a year apart when she took up a posting as a Tech Store In-Charge (IC) in an SAF overseas training centre.

"I volunteered to go overseas," said 2WO Asrena, 36. "As part of our career (progression), we have to complete logistics service support tours. That way, I was able to fulfil my junior term tour in an overseas detachment."

Being apart is a challenge for any couple, more so one that was newly-engaged and planning a wedding! But CFC (NS) Helmi never thought twice about letting 2WO Asrena pursue her dream.

"We discussed it first," he explained. "But I never stopped her. Not everybody can go overseas (for a detachment)."

With the wedding slated for just two months after the end of the deployment, they each saw to different aspects of the wedding plans, keeping in touch every day through email, Skype and MSN Messenger.

"I visited her parents, and I remember helping to paint their house, ahead of our wedding," he recalled.

These gestures helped set her mind at ease while she was away, said 2WO Asrena. "Working overseas was a new experience, and I was willing to take up the challenge. I was mentally prepared to leave my parents and new fiance — not that I didn't think of them, but I focused on my work."

2WO Asrena with fellow SAF troops during her year overseas at an SAF training centre. She was one of the first SAF servicewomen to be posted there for a long-term attachment.

Tag team
In her current appointment as an Asset Management Team IC in Supply Hub East, 2WO Asrena no longer goes on overseas deployments. However, whenever there is an In-Camp Training (ICT) for Operationally Ready National Servicemen (NSmen), she will have to spend additional hours managing the logistics and stores for their exercises.

She recalled an ICT that took place during the Muslim fasting month. Then a Regimental Quartermaster Sergeant for 68th Combat Service Support Battalion, she had to be in camp as early as 4.30am to make sure the rations were ready for the NSmen.

And like a well-rehearsed tag team, CFC (NS) Helmi steps up to send their two children, aged six and eight, from their home in Punggol to her father's place in Tampines, where they stay while the couple is at work. This, even though he works shifts as a Clearance Team Officer in the Immigration and Checkpoints Authority of Singapore.

"If I'm on the morning shift, then they will stay over at their grandfather's place the night before. If she's not around, then the next morning before 7am, I will go to Tampines to send them to school," he said.

It is his understanding of her busy work schedule that 2WO Asrena is most appreciative of. She said: "As and when I have to stay back late, I will just inform him, and he will manage the kids."

Seeing the lighter side
A good sense of humour is also what helps CFC (NS) Helmi adapt. For instance, he candidly admitted that 2WO Asrena's year-long stint overseas was a good thing because "it was a good time to save up for our marriage — with her away, we dated less, so less money spent!"

As luck would have it, he found himself at the same SAF training centre, when he went overseas for his ICT as part of 290 SA's recce team. And he had a pleasant surprise.

"Everybody I met, especially at the cookhouse, still remembered her! It's because she was one of the first SAF servicewomen to be based there. I was happy that they remembered her!" he recalled, beaming proudly.

"They were surprised to know I'm her husband, and some of them even gave me discounts!"