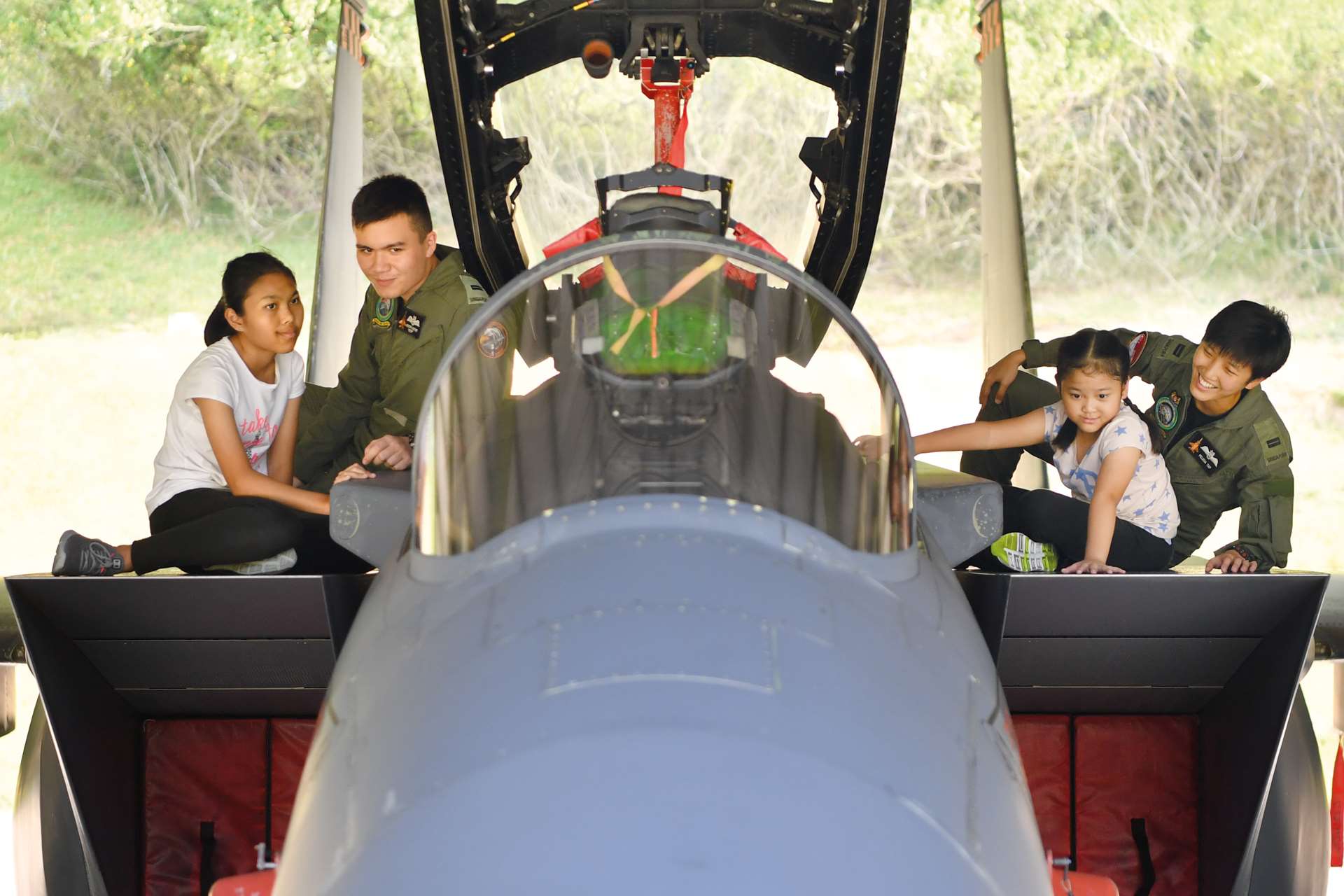 A special meeting with F-15SG pilot Lieutenant (LTA) Hendrik Borner, 23, and Weapons Systems Officer (WSO) LTA Felicia Yap, 27, has given Safia Nabila Binte Mohammed Shabirin, 13, and her sister Serin Narisa, 8, an idea of what they want to be when they grow up.

Everyone used to ask me, "What do you want to be when you grow up?" Until now, I had nothing in mind. Then I took a trip, which may be the ticket to finding my answer.

It was the eve of Teacher's Day, but for me that day was my "hot date" with an F-15SG – a fighter aircraft in the Republic of Singapore Air Force. I was thrilled to be able to see the jet together with my sister.

We arrived at the Paya Lebar Air Base pass office, where we had to surrender our identity cards. I realised the security there was pretty tight.

That's when I met Kak (an affectionate Malay term for "elder sister") Felicia. She was wearing the familiar green overalls with four patches on it. "Is she is a pilot?" I whispered in my head.

LTA Felicia told us that she was from 142 Squadron and would be our chaperone for the day. Curiosity got the better of me and I asked: "Are you the only girl in your squadron?" She nodded her head. I felt intimidated and also inspired.

LTA Hendrik (second from left) and LTA Felicia (right) showing me and my sister the screens and buttons inside the cockpit.

At the squadron, we were joined by another RSAF aircrew Abang (an affectionate Malay term for "elder brother") Hendrik. Together, we rode in a green van to the hangar, where the F-15SG was parked. This was how the aircrew travelled to the jets for their missions.

During the trip, LTA Hendrik explained that he was a pilot and LTA Felicia was a "Weeso" – at least that's what we heard. LTA Felicia clarified that it's "WSO" – Weapons Systems Officer. We learned that we could identify them by the words in the wings embroidered on their flight suits.

We were welcomed by a majestic F-15SG at the hangar. LTA Hendrik gave us a tour of the plane and described the type of weapons they use. The metal was smooth to the touch as we glided our hands over the jet.

LTA Hendrik and LTA Felicia demonstrated the different checks that pilots and WSOs carry out before flying. The pilot checks the aircraft for things like fuel levels and flight controls, while the WSO keys in the coordinates for the flight path.

We climbed up to the cockpit and sat on the ledge. It was scary at first because I am afraid of heights and the ledge was high up above the ground. I took a deep breath and moved carefully onto the ledge, so did my sister. LTA Felicia held our hands and helped us.

Exploring the underside of the jet with LTA Hendrik.

A drive for two

There were two seats in the cockpit, one in front for the pilot and the other for the WSO. The inside of the cockpit looked complicated. We saw a number of buttons and screens facing both the front and back seats.

LTA Hendrik and LTA Felicia explained to us the roles of the pilot and WSO. A pilot is like the captain of the jet. He is responsible for operating the jet and makes all the final decisions during a mission. The WSO behind him helps the pilot and operates the targeting pod to find the target while he's flying.

During combat, the pilot's primary role is air-to-air fighting with other jets. The WSO is responsible for air-to-ground combat. She keys in the coordinates for Global Positioning System-guided bombs, and directs the jet's laser for laser-guided bombs. These help the pilot to drop the bombs accurately on the targets.

I learnt a lot about how the pilot and WSO work together. It's like how my dad drives and my mum answers his phone messages for him.

It was truly an unforgettable experience for me and my sister. As I was writing this, I could still feel the metal where we had sat on the jet. Maybe I'm now closer to knowing what I want to be when I grow up!

LTA Felicia helping me to put on the helmet. It was tight and heavy, but I felt safe, especially with the oxygen mask on.
Tags october-2018-issue F-15SG pilot Weapons System Officer WSO RSAF Republic of Singapore Air Force
Suggested Reading