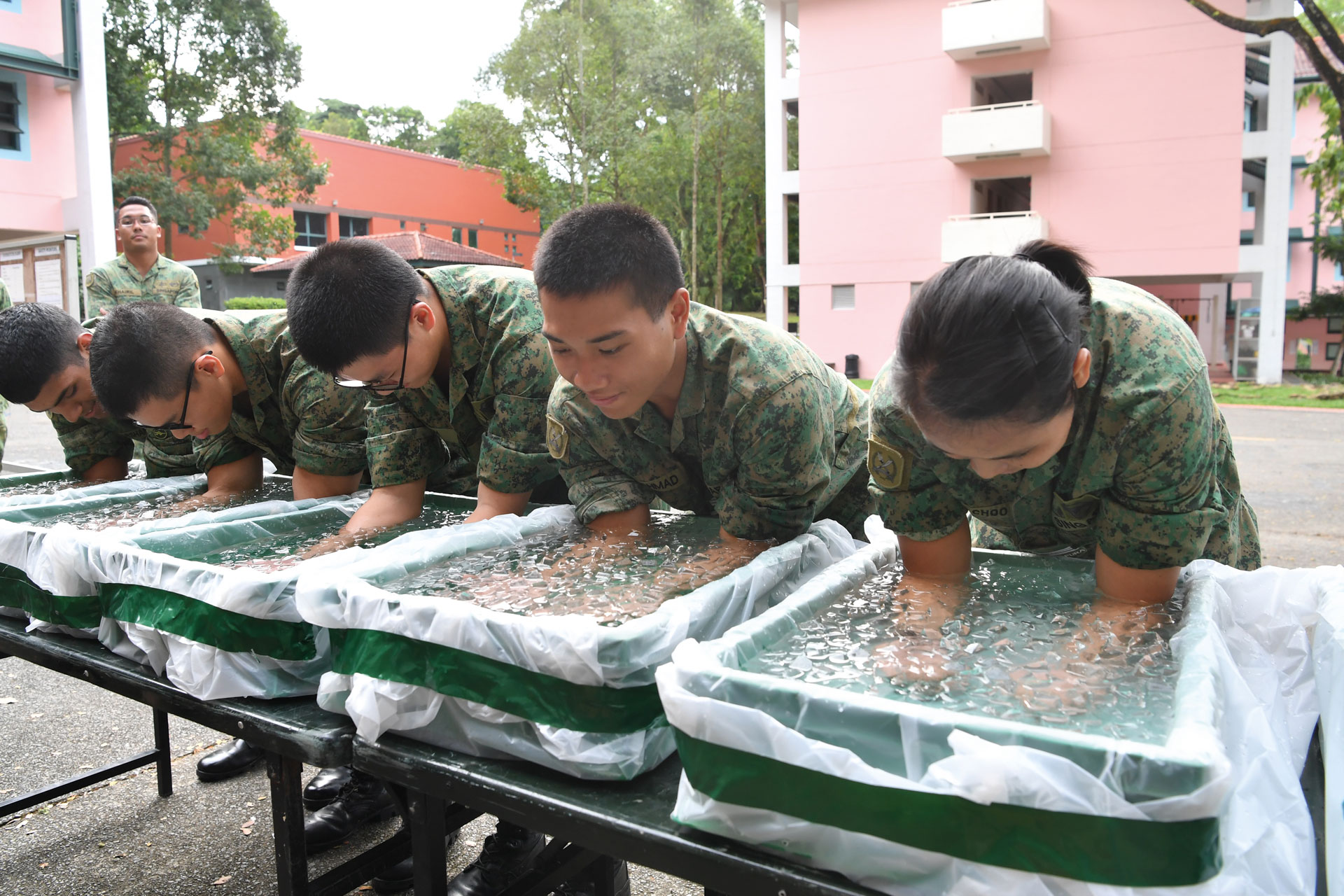 Soldiers who go through fast marches 12km or longer will now use the AICS during and upon completion of the activity.
English Melayu

"We need a strong SAF that can defend Singapore, but it must and can be built up without compromising the safety and well-being of Singapore's precious sons serving their National Service." Minister for Defence Dr Ng Eng Hen made this point in a Ministerial Statement in Parliament on 6 Aug, where he spoke about the Committee of Inquiry's preliminary findings on Corporal First Class Dave Lee's death.

The 19-year-old Full-Time National Serviceman passed away from heatstroke on 30 Apr after spending almost two weeks in intensive care at Changi General Hospital.

These include strengthening commanders' knowledge on heat injuries and when best to pull out soldiers who look unwell or are struggling to cope.

The panel also emphasised the need for medics to exercise their professional authority when dealing with medical issues and communicate effectively with senior commanders.

They have been implemented at the Basic Military Training Centre (BMTC) since August and will be made mandatory across the SAF in phases.

A simple and efficient method of cooling the body's core temperature by submerging the hands and forearms fully in iced water.

The forearms contain a large number of blood vessels, so submerging them into iced water rapidly cools the blood and reduces body core temperature. Water has also been proven to remove heat 25 times better than air.

From August, all soldiers who go through fast marches and route marches of 12km and above will undergo the AICS during and upon completion of the activity.

A large surface cooling system which extracts heat rapidly when applied directly to the body over multiple areas.

Made of graphite and water, these purpose-built cooling pads cool 15 times faster than ice.

Upon application, their cooling properties can last up to an hour in the open. They also stick well onto the body and are portable, making them suitable for use in a field setting.

The pads replace the ice packs as an immediate on-site cooling measure for suspected heat injuries.

The current practice is to place two ice packs each on the neck, armpits and groin area. Now, medics will stick six cooling pads across four areas of the body — the chest, abdomen, thighs and the back.

Each medic in BMTC will be equipped with 12 packets of cooling pads, allowing them to treat up to two heat injury casualties simultaneously.

The ERPHIM was commissioned in May by the Ministry of Defence to examine the SAF's policies and measures for the management of heat injuries. While the panel found the SAF's measures to be generally sound and aligned with prevalent industry and foreign military practices, there was room for further enhancements. Here are other measures that the SAF has taken up:

Lowering the bar for evacuation

All SAF commanders and medics must immediately evacuate any trainee who cannot respond to simple questions about time, place and identity.

The SAF will instil mandatory questions on heat injury management during the annual Training Safety Regulation test for commanders. SAF medics will also be tested on managing heat injury cases during their annual medic proficiency test.

Since 2011, soldiers have been encouraged to use the Army safety hotline (9-SAFETY-1 or 9723 3891) to report unauthorised activities or safety breaches. They can also do so via texting apps like WhatsApp or Telegram.

As the panel found that most cases arose from soldiers pushing themselves beyond their limits, the SAF intends to cater for more make-up training opportunities to prevent soldiers from over-exerting themselves.