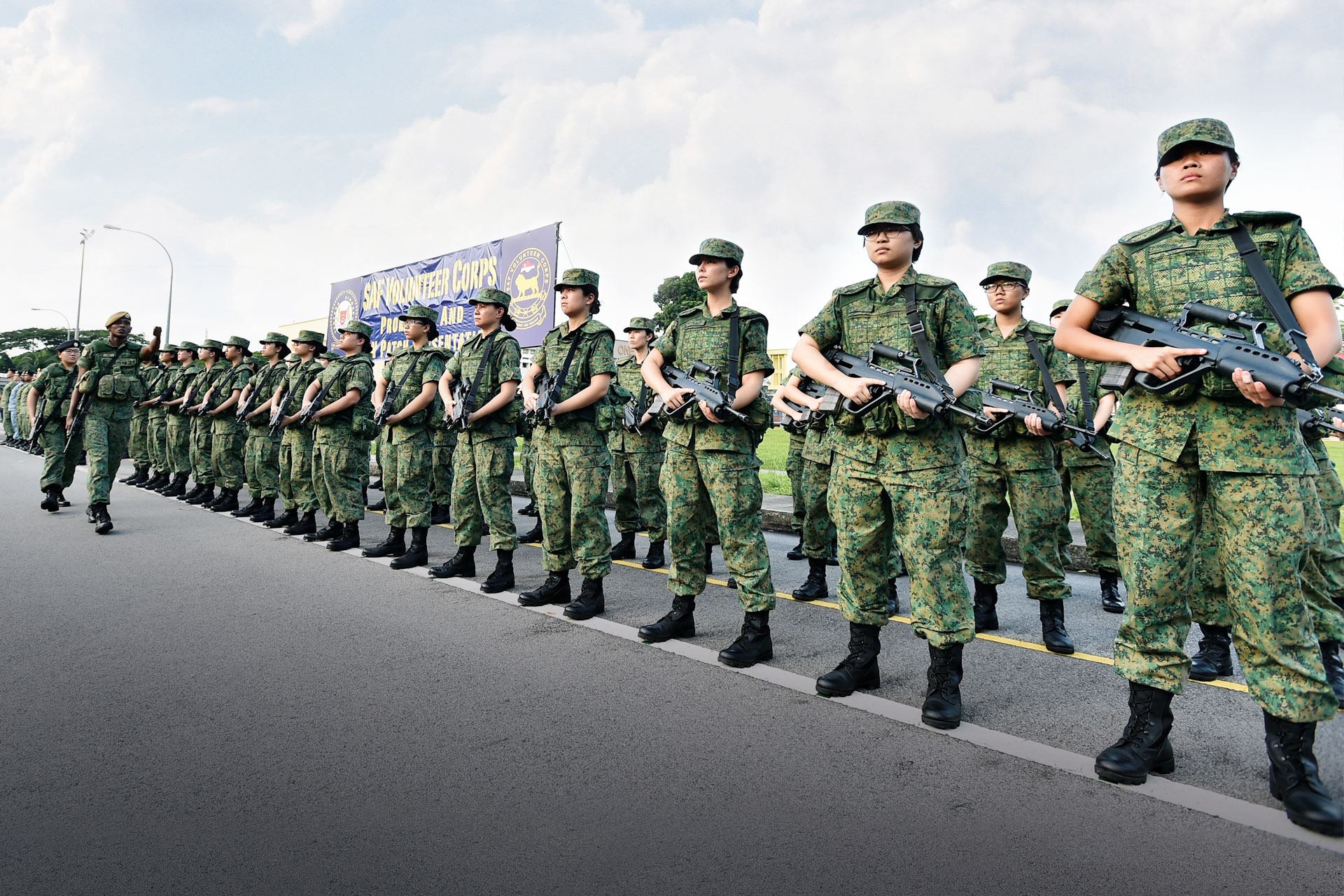 Three years after the setup of the Singapore Armed Forces Volunteer Corps (SAFVC), PIONEER takes a look at how some of the SAFVC Volunteers (SVs) from the first cohort are doing.

It started with an inaugural intake of 226 volunteers - today, more than 700 SVs have enlisted in the SAFVC.

Coming from all walks of life, they contribute to national defence, alongside active troops and national servicemen.

In June, Senior Minister of State for Defence Dr Mohamad Maliki bin Osman announced the addition of 15 roles for SVs in areas such as safety, engineering and supply chain, bringing the total number of roles to 31. The SAFVC held its first tri-Service promotion on 23 Jun at Maju Camp.

SVs must graduate from Basic Training and Qualification Training - that equips them with the skills to perform their specific roles - before they are ready to be deployed for up to 14 days a year.

PIONEER speaks to the SVs who have served for the past three years.

Eyes on the high seas

Sailing is not for girls. This was what SV2 Arlene Pang's father, a naval engineer during his National Service (NS) days, told her.

But when she enlisted to volunteer as a Bridge Watchkeeper (BWK) with the Republic of Singapore Navy (RSN), he gave her his blessing.

Afterall, he played a part in developing her interest in sailing - she followed in his footsteps to get a pleasure craft sailing license when she was 30.

And when SV2 Pang joined the SAFVC in 2015, the secondary school biology teacher took on a much fiercer vessel - the RSN's Landing Ship Tank (LST).

Part of SV2 Pang's (right) duties as a BWK include looking out for potential hazards and other vessels while the ship is out at sea.

Busy on the bridge

"Red, 1-0, bulk carrier, approaching, far." In layman terms: a bulk carrier at the ship's port (or left) side is heading towards the ship from the opposite direction, and is relatively far away.

As part of her duty as a BWK, SV2 Pang must constantly scan the sea and report to the Officer Of the Watch (OOW). The OOW can then make timely decisions on how to respond - for example, if there is a need to alter the ship's course and speed.

Already on her fourth deployment (where she sailed with LST RSS Persistence for a helicopter operations exercise this June), SV2 Pang is familiar with ship jargon, known as voice procedures.

But remembering all the different combinations can still be a challenge. Heavy sea traffic and poor visibility during bad weather also adds to the stress of her role. So how does she overcome this? "Just revise!" she quipped.

"If there is something specific and useful to know, I write it down. I also read my notes before every deployment," she said.

Incidentally, learning about ship operations was something that the teacher-of-10-years could appreciate.

"There are many new things to learn (from the crew)," she said. "It reminds me that, as a teacher, I must find different ways to help my students learn too."

One of the 35-year-old's most memorable experiences was taking part in a live-firing exercise during a sail. "It was interesting to learn how the RSN (hones its skills in) war games out at sea," said SV2 Pang.

She also values the strong camaraderie with her fellow SVs. "Everyone energises one another. So you look forward to every deployment."

"I totally forget that I'm an ang moh when I'm at the base.

"It doesn't matter if I don't look local - the other servicemen treat me like one of them, and I really feel like I'm part of the (unit)."

To SV2 Nicolas Mas, this is one of the "best feelings" he gets from serving as an Auxiliary Security Trooper (AST) in the SAFVC.

Born and bred in Paris, France, SV2 Mas came to Singapore in 2010 to settle down. He did not expect that he would become Chief Technical Officer of a start-up tech company and even meet his future wife here.

The Singapore Permanent Resident, who used to serve in the French Navy, decided to contribute back to the country when he saw the call for volunteer soldiers in 2015.

"I call Singapore home and I thought it would be great for me to further this integration process (by directly contributing to defence)."

Part of something bigger

As an AST, SV2 Mas has been deployed by the Army to assist in security operations at access control points at SAF camps and bases, and other SAF organised activities. This means that he is trained in search and arrest procedures; personnel and vehicle checks; as well as applying rules of engagement in appropriate situations.

While training was tough for the 39-year-old, being in the pioneer batch of SVs was exciting. "I'm from a start-up background so I'm used to building things from scratch. I'm glad to be a part of the first batch and to see the Corps grow," he said.

He has also been deployed to support security and crowd control at large-scale events such as the 2015 National Day Parade, 2016 SAF Day Parade and 2017 Army Open House.

He even inspired his wife, SV1 Ting Hui Shan, to step forward. She enlisted as an AST a year after him, in 2016.

Recalling a letter that her husband wrote to her during her Basic Training, SV1 Ting, 34, said: "He put in perspective the purpose of our training: ‘Now you are part of something bigger than yourself'."

"You can say you cried," SV2 Mas said cheekily to his wife. She admitted that she did.

A consultant without a personal agenda. That is the X-factor that SV2 Chi Meina brings to the Republic of Singapore Air Force (RSAF) as a Command, Control, Communications and Computers (C4) expert.

The RSAF C4 experts' role is to provide recommendations in the areas of info-communications, radio communications and networks that are critical in keeping the airspace safe.

Having served two deployments with the Air Operations Department (AOD), SV2 Chi has worked with the RSAF C4 team to study solutions that meet the RSAF's stringent requirements.

"Solutions companies only tell you their solutions but don't share their bad points. Because we are SVs, I'm able to share my views freely," she said.

It's eye-opening to find out more about Air Force operations, said SV2 Chi.

After becoming a citizen in 2014, SV2 Chi was looking for a suitable way to give back to Singapore. The former Chinese national had done defence projects as a solutions architect in French defence electronics group Thales, and found the SAFVC to be a good match.

Now the Head of System Management at Certis CISCO, she brings 10 years of systems engineering experience to the C4 team.

"It's fun to find out more about Air Force operations and it's an eye-opener to see things that we don't see in our civilian lives," added the 39-year-old as she recollected her visits to RSAF ground units.

The mother-of-two makes it a point to talk to her daughters, who are 10 and 6 years old, about her time in uniform.

"They understand why I have to work late sometimes. I think my girls may grow up to do something similar after they see what their mom does," she said.

When asked what keeps her going, she said: "I feel grateful to be given the chance to serve. As long as the RSAF needs me, I will be back."