After the 5th ADMM-Plus on 20 Oct, Minister for Defence Dr Ng Eng Hen announced that the Plus countries have agreed in principle to support the new code, which aims to enhance regional aviation safety.

The eight Plus partners are Australia, China, India, Japan, New Zealand, the Republic of Korea, Russia and the United States (US). GAME was adopted by the ASEAN defence ministers at the 12th ADMM, held at the Shangri-La Hotel on 19 Oct.

This was one of three initiatives that Dr Ng had called for as ADMM chairman earlier this year, which included enhancing counter-terrorism (CT) cooperation, and building ASEAN's capabilities against Chemical, Biological and Radiological (CBR) threats from terrorist groups and rogue actors.

Said Dr Ng: "It's a good start; we're taking concrete steps to build confidence so that if there is an unexpected (military aircraft) encounter, both sides know what to do."

Commenting on ASEAN's maritime exercise with China in October and another planned maritime exercise between ASEAN and the US next year, Dr Ng said that these exercises underscored and strengthened the centrality of ASEAN.

He also noted that small as ASEAN may be, having a collective voice could be helpful in soothing issues between larger countries such as China and the US.

In his opening address at the ADMM-Plus gala dinner, Dr Ng urged member states to build trust in spite of disagreements for a safer world.

"It is not possible for all of us to agree on everything, but this must not stop us from finding common ground to build trust and find a way forward.

"We want to keep our citizens safe and make the world safer. And I'm sure that binds us all." [7:15pm]
Dr Ng interacting with his Malaysian counterpart Mohamad Sabu during a dinner at the Grand Copthorne Hotel, ahead of the ADMM. Mr Mohamad had called on Dr Ng at the Ministry of Defence earlier that morning, where they reaffirmed the warm defence ties between both countries. 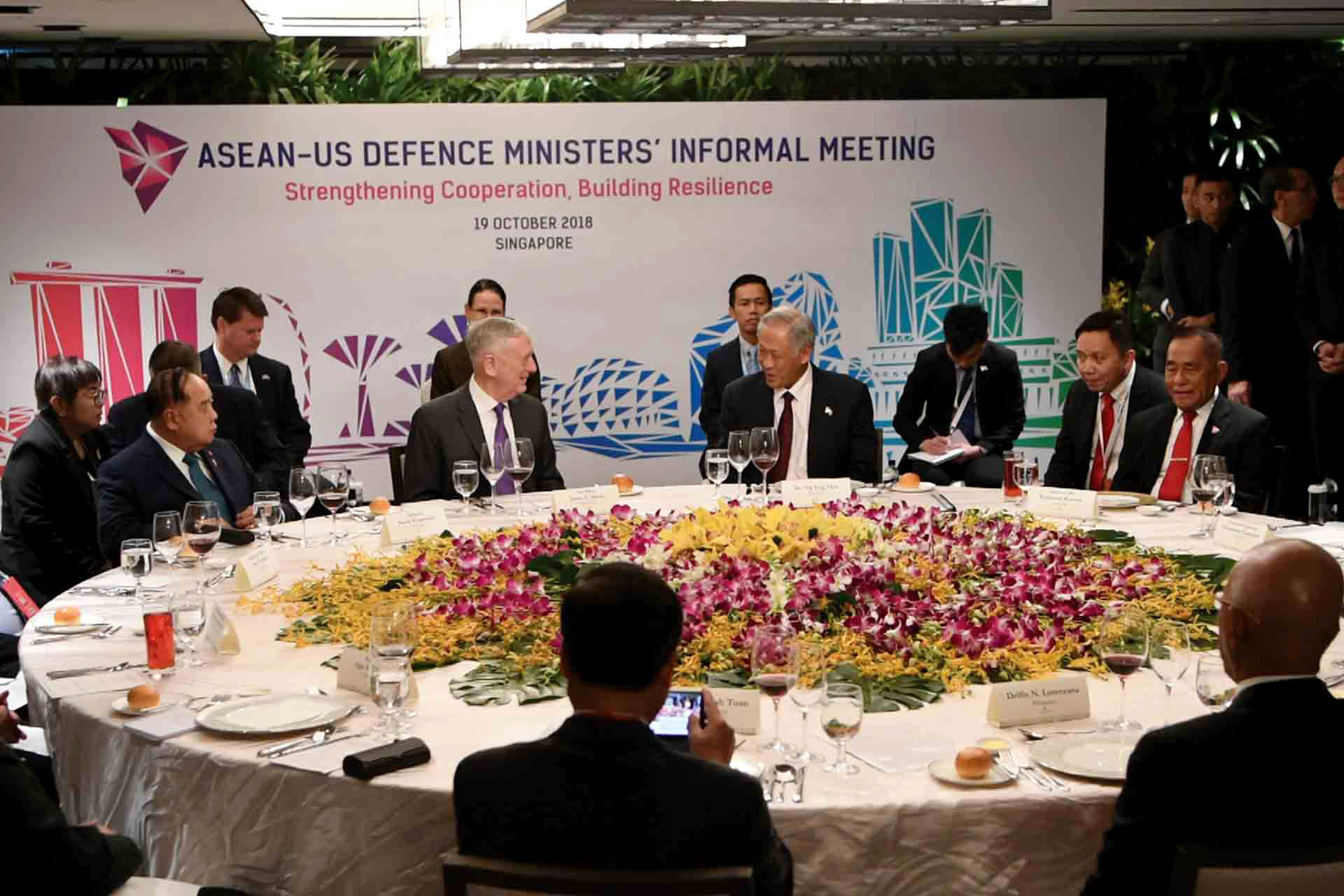 [12:37pm]
Over a lunch meeting with the ASEAN defence ministers, US Secretary of Defence James Mattis (seated, second from left) said that he welcomed the conduct of the first ASEAN-US maritime exercise next year.

Said Mr Mattis: "For more than 40 years, ASEAN and US' engagements have been a binding force… The US is and will be forever an Indo-Pacific nation, and our interests in the region are inextricably intertwined." [2:18pm]
In his first meeting with the ASEAN defence ministers, State Councillor and Minister of National Defence General (GEN) Wei Fenghe (centre, in uniform) said that China was committed to building closer ties with ASEAN. [8:12am]
During a breakfast meeting between the defence ministers of ASEAN and Japan, Dr Ng and his Japanese counterpart Takeshi Iwaya (far right) welcomed the progress of ASEAN-Japan defence cooperation. This year marks the 45th anniversary of ASEAN-Japan friendship and cooperation.

Affirming Japan's continued engagement of ASEAN, Mr Iwaya announced the introduction of the Professional Airmanship Programme between the Japan Air Self-Defence Force and air Services of ASEAN member states. "Through inviting air officers of ASEAN to Japan, this programme aims at promoting shared values to ensure the rule of law."

[9:38am]
After the 5th ADMM-Plus, Dr Ng announced that the Plus member states had agreed in principle to adopt the GAME framework. [12:36pm]
Singapore handed over chairmanship of the ADMM and ADMM-Plus to Thailand.

Thanking the defence ministers for the strong support given to Singapore over the past year, Dr Ng said: "Together, we have enhanced practical cooperation among ASEAN and our Plus partners, and anchored the ADMM and ADMM-Plus' role as the cornerstone of the Asia-Pacific regional security architecture."

Thailand Deputy Prime Minister and Minister for Defence GEN Prawit Wongsuwan (right) added that Thailand would build on the cooperation and initiatives that Singapore had established this year.

This includes strengthening defence cooperation and promoting collaborative partnerships to deal with non-traditional challenges in the region. Ever had an experience so impactful you made a movie about it? Local filmmaker and ciNE65 mentor Mohamad Sanif Olek is doing just that. No mid-life crisis for the Music and Drama Company as it celebrates 45 years of entertaining Singaporeans and soldiers with bigger and better performances. Whether it was sailing with the historic Russian tall ship Pallada while pursuing her diploma in maritime law at a UK university, or roughing it out on Pulau Tekong during Basic Training with the Singapore Armed Forces Volunteer Corps (SAFVC), SAFVC Volunteer (SV) 1 Genevie Loh had always set her sights on joining the Navy.