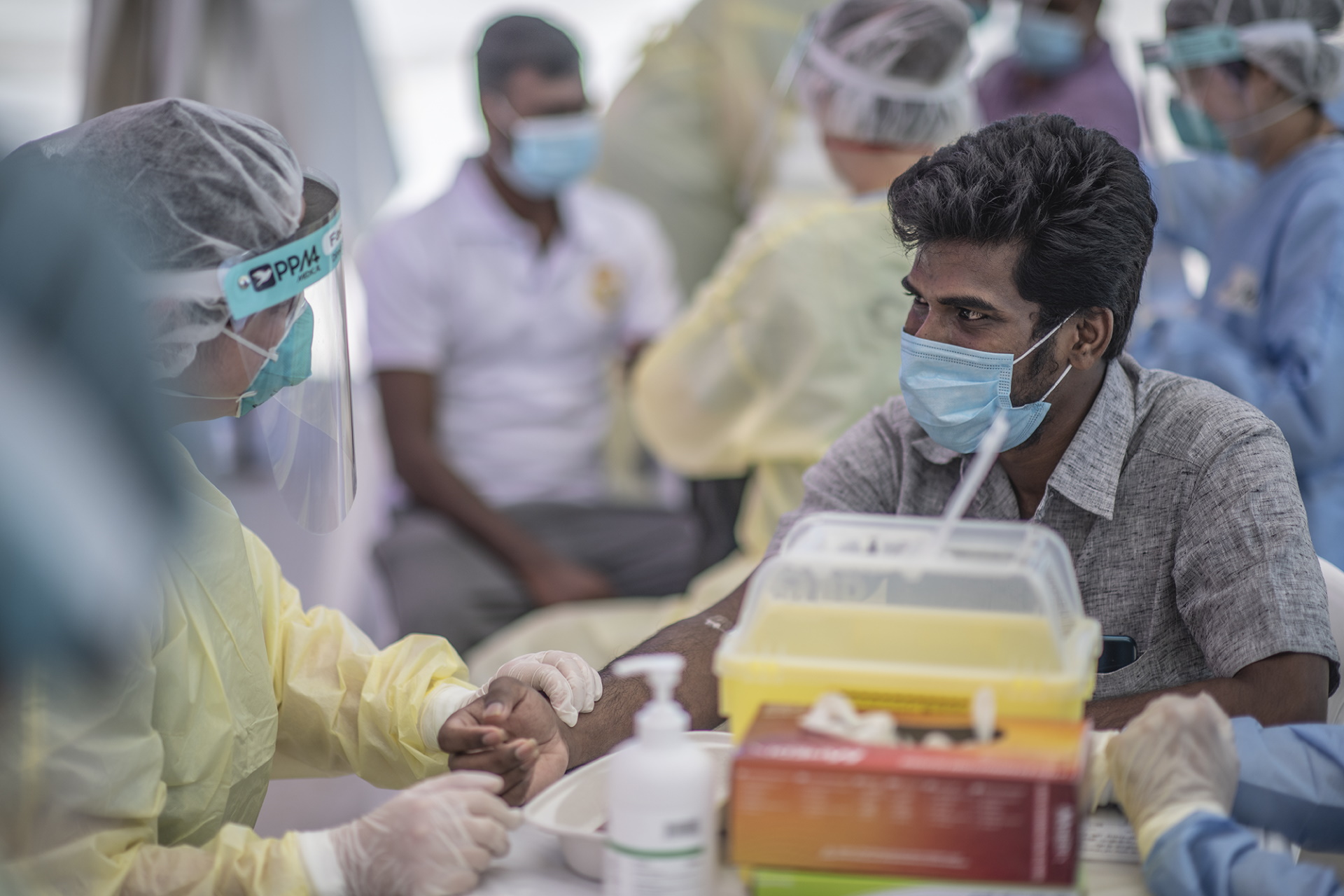 Bringing light to the COVID-19 fight

From swabbing and recovery to the remitting of money, LTC Chua documents the journey of migrant workers and frontliners through photos with the hashtag #storiesfromthefrontline.

Spreading positivity, one photo at a time.

This was what LTC Alex Chua set out to do when he volunteered to become a photographer with the Inter-agency Task Force (ITF) for the fight against COVID-19.

"While I was there, I realised that the living conditions of migrant workers at the dormitories were not as bad as how they were portrayed. So I wanted to show the real picture," said LTC Chua, who is Head Coordination at Changi Regional HADR Coordination Centre.

The 48-year-old was already documenting the journey of his team and other front-liners on his Facebook page when he was leading the FAST at the Woodlands Lodge 1 dormitory.

LTC Chua (right) and Major (MAJ) Jonathan Ong are part of the Information Team as photojournalists for the Inter-agency Task Force at Woodlands dormitory.

Together with his team of 13 Singapore Armed Forces (SAF) and Ministry of Manpower (MOM) personnel, they set up infrastructure such as isolation rooms to control the spread of the virus, as well as helped migrant workers get used to new systems and processes.

When his month-long (10 Apr to 10 May) stint ended, he decided to volunteer his services with ITF Information Team. Two days later, he began his new role as a photojournalist.

LTC Chua visits up to four dormitories and takes almost 500 photos in a day. From swabbing and recovery to the remitting of money, he documents them all with the hashtag #storiesfromthefrontline. It is through these daily shoots that he uncovers stories that touch his heart.

One story is of a particularly moving account of a migrant worker remitting money home. Mr Jaganathan Jeeva caught his eye as he was holding a wad of cash while queueing at a mobile remitting counter, a service that the FAST team provides.

After talking to him, LTC Chua realised that Mr Jaganathan remits $600 out of the $750 that he earns every month in order to support his two undergraduate children, wife and elderly mother.

“I only need $150 for food and phone bill. I don't smoke, drink nor buy stuff. So I give as much as I can to my family." – Mr Jaganathan Jeeva

"It was very heart-warming and humbling to talk to a man who selflessly puts his family as the top priority while leaving the bare minimum for himself. We have so much to learn from him," said LTC Chua.

Another favourite shot of his was when 63 migrant workers from Woodlands Lodge 1 dormitory were moved to the BRW (Block for Recovering Workers) after spending 23 days in isolation facilities. They had previously tested positive for COVID-19.

It was a particularly emotional moment; LTC Chua had first encountered them when he was the FAST Team Lead.

LTC Chua's favourite photo: A 'graduation' of 63 migrant workers who were moved to the recovery block.

"There was a 'mini parade' and the new team lead was cutting their wristbands. Some of them recognised me and gave me a thumbs-up, so that's how the photo came about."

Besides photographing migrant workers, LTC Chua also puts up various photos of front-liners to show the how tirelessly they work despite the risks, heat and long hours. Photos of personnel in Personal Protective Equipment and perspiration rolling down their faces dominate his Facebook page.

Photographs of front line personnel, such as Dr Stephanie Yap, a dentist who is part of the mobile swab team, fill LTC Chua's Facebook page.

"These front-liners come from all walks of life. They are selfless, they just want everyone to be OK. It’s good to see these people together in the fight against COVID-19."

LTC Chua added that many of them also do more than required. For instance, the MOM personnel who are in charge of food often double up to escort migrant workers as they transfer from one facility to another when manpower is tied up in other tasks.

For LTC Chua, one photo of a fellow FAST Team Lead at Westlite Mandai dormitory MAJ Jackson Wong talking to migrant workers who were queuing for a serology test, sums up the work that FASTs do to fight the spread of COVID-19.

"The photo reflects what we do as a FAST team – it’s about interacting with the dormitory operators and migrant workers to understand their fears and concerns so that we can address them and make things better."

MAJ Jackson Wong talking to migrant workers to find out how the serology test was like, as well as getting feedback about their accommodations.

We’re all in this together

Ever since Speaker of Parliament Tan Chuan-Jin shared one of LTC Chua's images, his photos have gone viral.

That was a good thing, as it was always LTC Chua's intention to spread positivity and cheer through his photos.

"People tend to spread negative news online but what we need now are positive messages. So it's good to see many positive comments and shares on the photos – it all helps in this pandemic and how we fight COVID-19."

He also wants to encourage his fellow SAF personnel who are currently in the front line fight: "We may be doing something as insignificant as preparing tables or simply accounting for meals, but every little action contributes to the lives and well-being of the migrant workers.

"Just keep doing what we are doing." 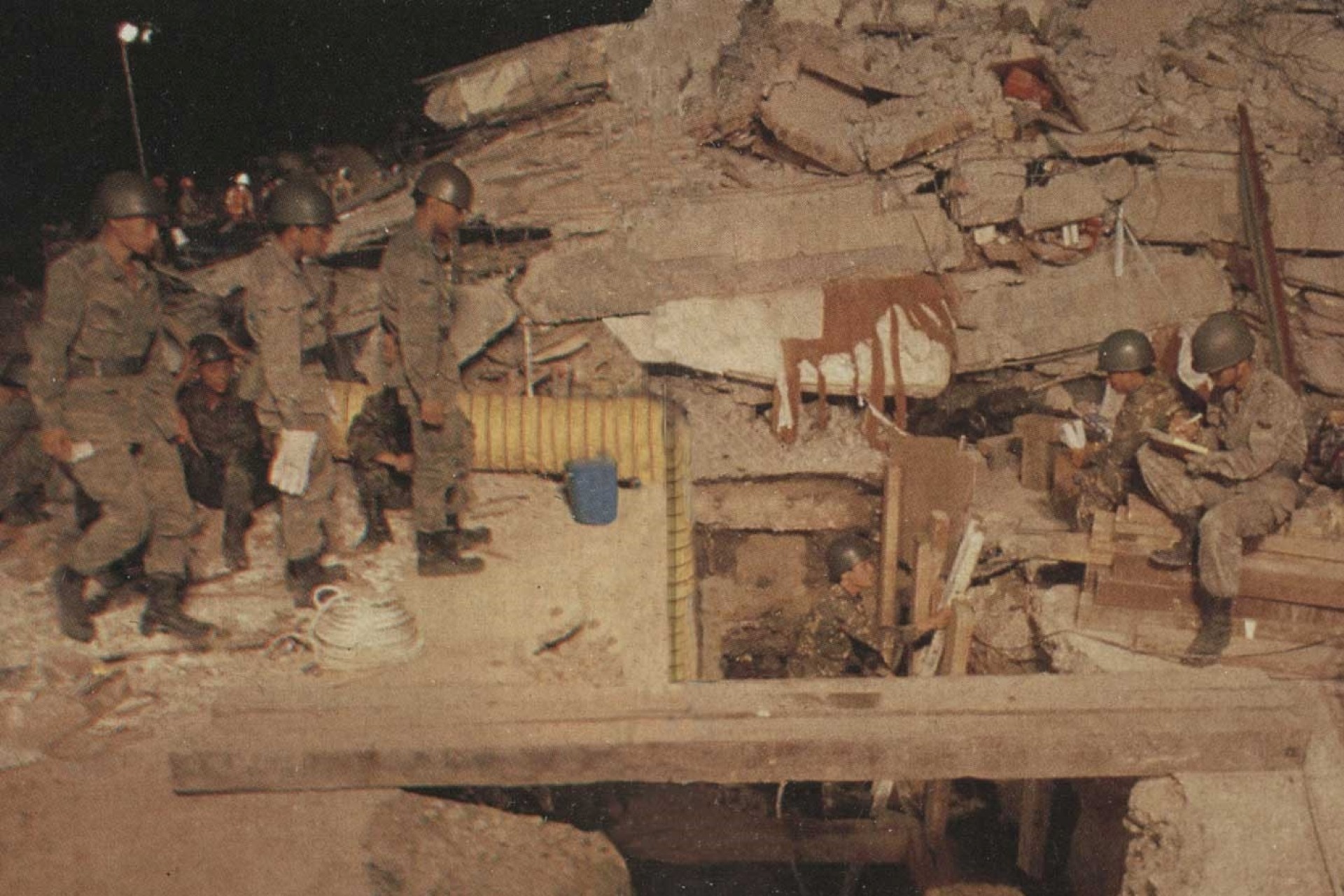 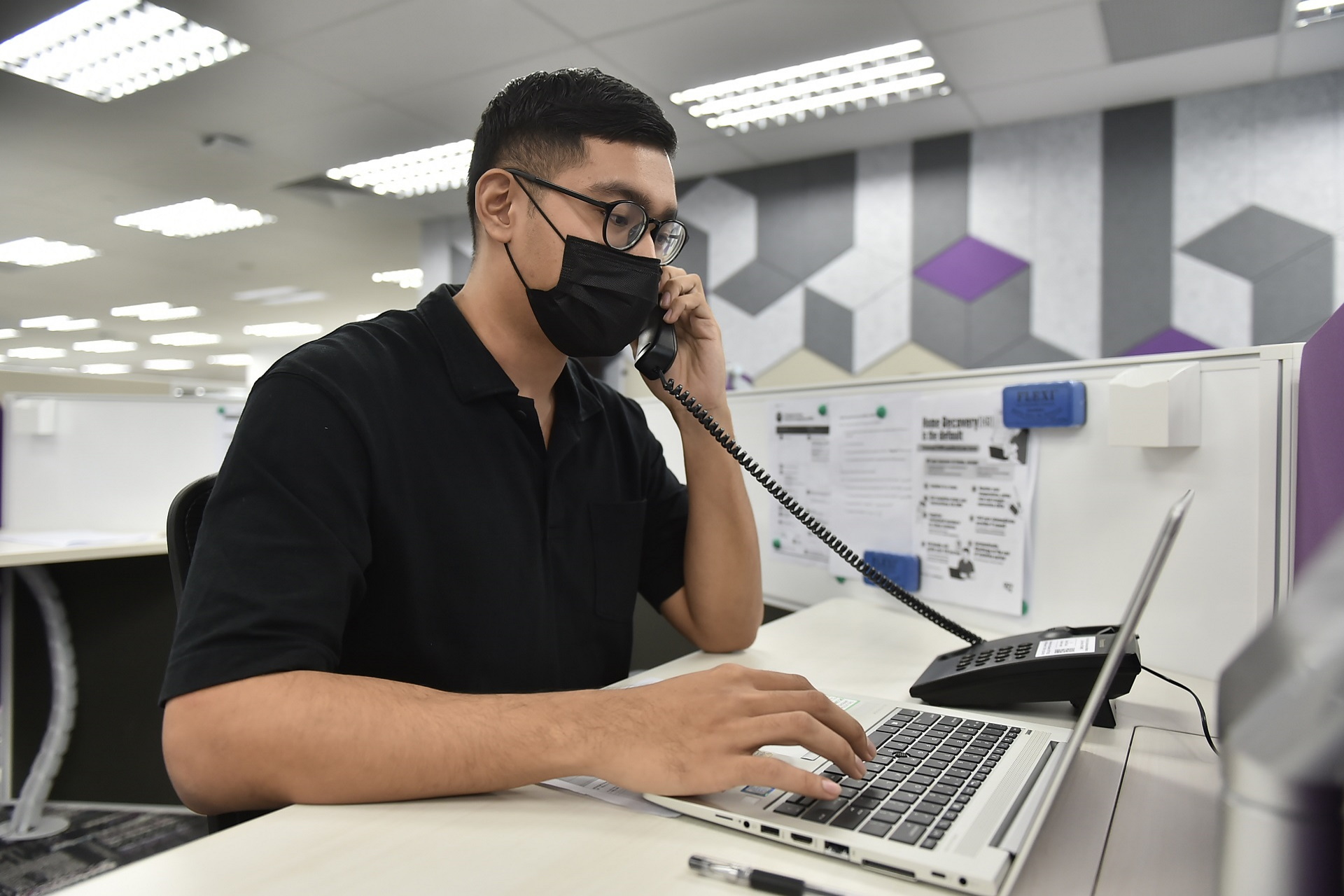