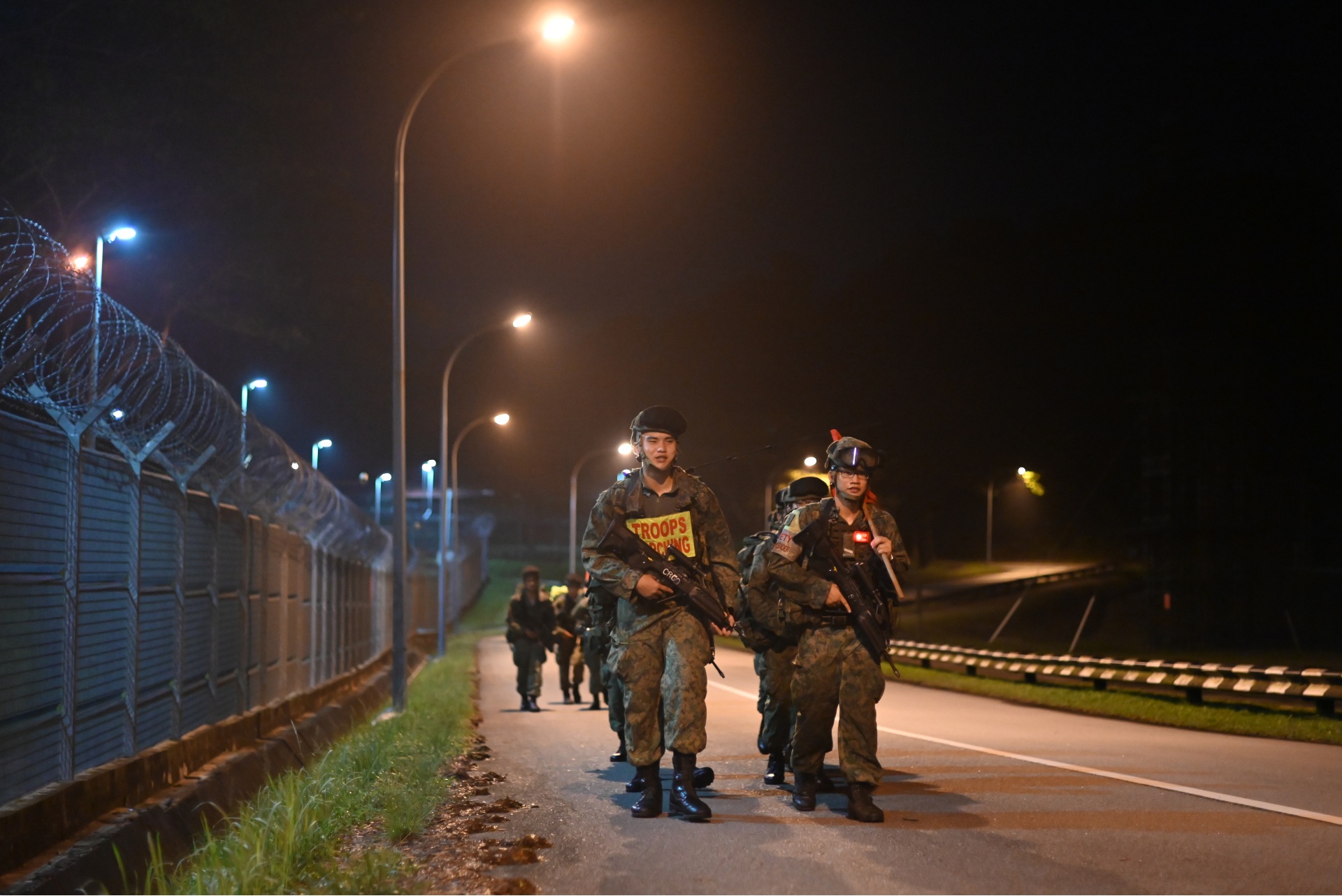 Rock around the clock

Exercise Sergeant Rocky will be a test of everything these Specialist Cadets have learnt in the past eight weeks at Specialist Cadet School (SCS). They will have to prove their skills as well as mental and physical resilience in this overnight exercise, which can take up to a maximum of six hours and forty-five minutes to complete.

Specialist Cadets form up at Pasir Laba Camp's Chevron Square to receive their final briefing from instructors before moving off. It’s going to be a long night for these leader trainees from SCS I’s Alpha, Bravo and Charlie Company.

"We assess the cadets' proficiency level, and whether they have acquired the knowledge to perform the tasks assigned to them. This is a summative exercise, a testament of their hard work the past eight weeks."  – 1st Sergeant (1SG) Goh Si Man Simone, Senior Trainer, SCS I

Exercise Sergeant Rocky officially begins with the Mystery Box challenge. Four representatives from each section are given up to 15 minutes to memorise a long list of items (related to leadership training and force preparation) inside the "box".

At the end of the exercise, they are expected to remember and list down the items in the correct sequence. This task may appear simple, but try it after an entire night of marching and physically demanding activities – and you can see why this is particularly tough. P.S. No phones and writing on paper are allowed!

Specialist Cadets have to march a minimum of 12km, as they make their way to seven stations situated in and around Pasir Laba Camp. While Exercise Sergeant Rocky is also a contest among the sections, it is not a contest of speed – the sections are assessed by how well they perform at every station.

At the Claymore Mine station, Specialist Cadets have to correctly lay down, set up and arm a training (dummy) Claymore Mine within the stipulated time. The Claymore Mine is primarily used as an anti-infiltration device to ambush enemy troops and soft-skinned vehicles.

A Specialist Cadet sits down for the Theory Quiz station, where subjects related to soldiering fundamentals and weapon knowledge are tested.

At the Navigation station, Specialist Cadets put on the custom-made visors to simulate navigating in darkness. Here, they have to navigate their way using a compass and demonstrate they are able to correctly calculate a specific distance by counting their footsteps – a technique known as "pacing".

"My motivation for doing well in this exercise comes from the fact that this was our last high-key conduct of the Foundation Term, and we wanted to end it off with a bang. We wanted to go out high. So, we gave our 110 per cent and went all out."  – Specialist Cadet (SCT) Kharran Mangondaar s/o Mugunthan, Charlie Company, SCS I

A Specialist Cadet at the Signal station. Knowing how to properly and quickly set up a signal set to establish communications is vital to a unit's command and control, which improves the chance of surviving and thriving on the battlefield.

A Specialist Cadet setting up a Trip Flare. This device activates a bright flare when tripped by the enemy, and alerts forces of a breach in the security perimeter.

Upon returning to Chevron Square, the same Specialist Cadets who had memorised the "Mystery Box" items a few hours ago have to jot them down in the right order, except now they are all exhausted and drenched in sweat!

"Since BMT (Basic Military Training), I knew I wanted to go to Command School. Having the opportunity to learn from my trainers, my Platoon Commander and my Officer Commanding has given me the inspiration and confidence to be able to handle and lead my own section in the future." - SCT Muhammad Nur Darwisy Bin Ismail Hedzir, Bravo Company, SCS I

Following the successful completion of Exercise Sergeant Rocky, all the Specialist Cadets form up at the Leaders Square for the Senior Cadet Rank presentation.

Platoon Commander of Alpha Company, 2nd Warrant Officer Tan Eng Tat going down the line and presenting the Specialist Cadets with their new ranks (next photo).

Finally, the moment the Specialist Cadets have been waiting for – the donning of the Senior Cadet Rank, as they move on to their Professional Term – the last step before becoming full-fledged SAF Specialists and Military Experts. 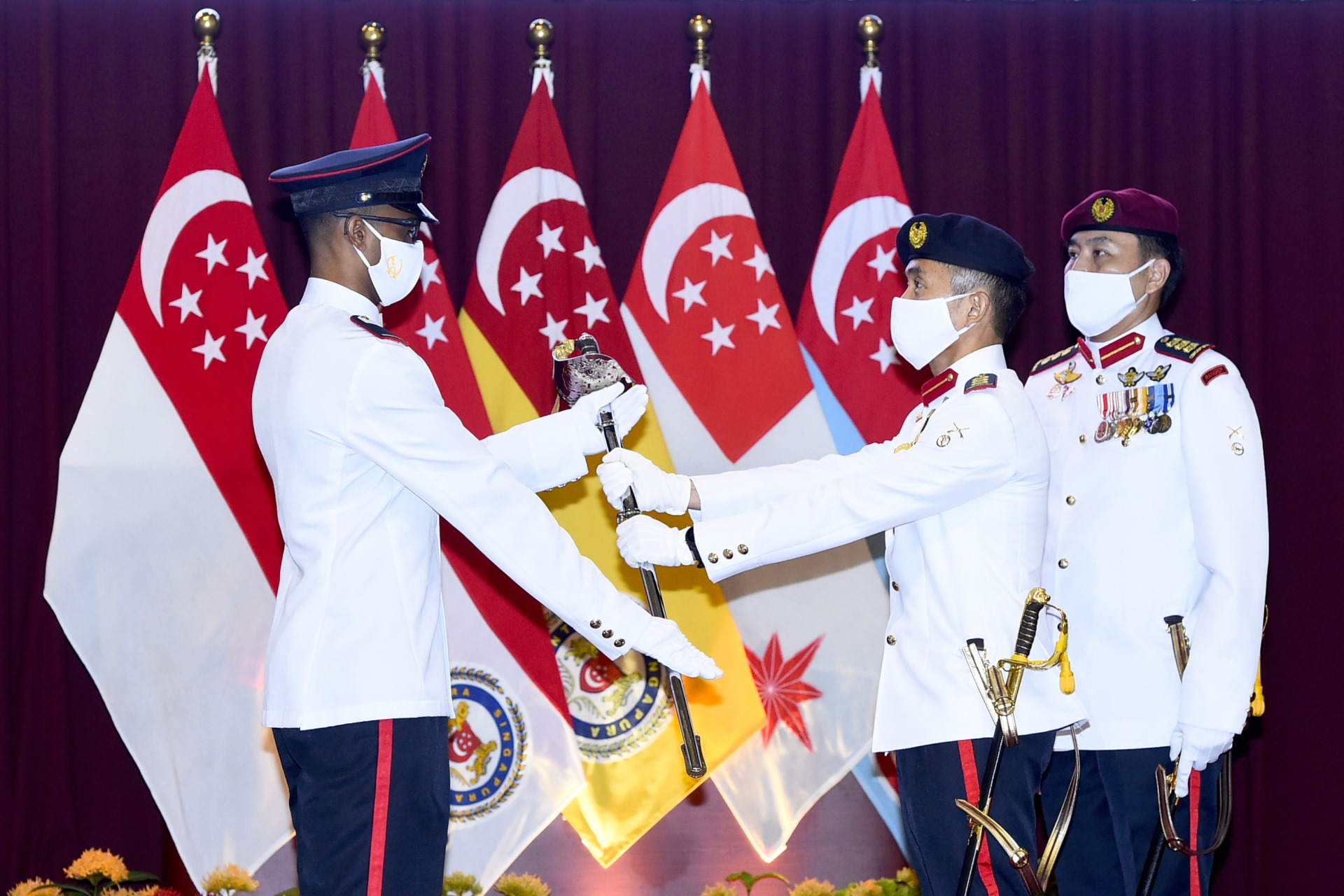 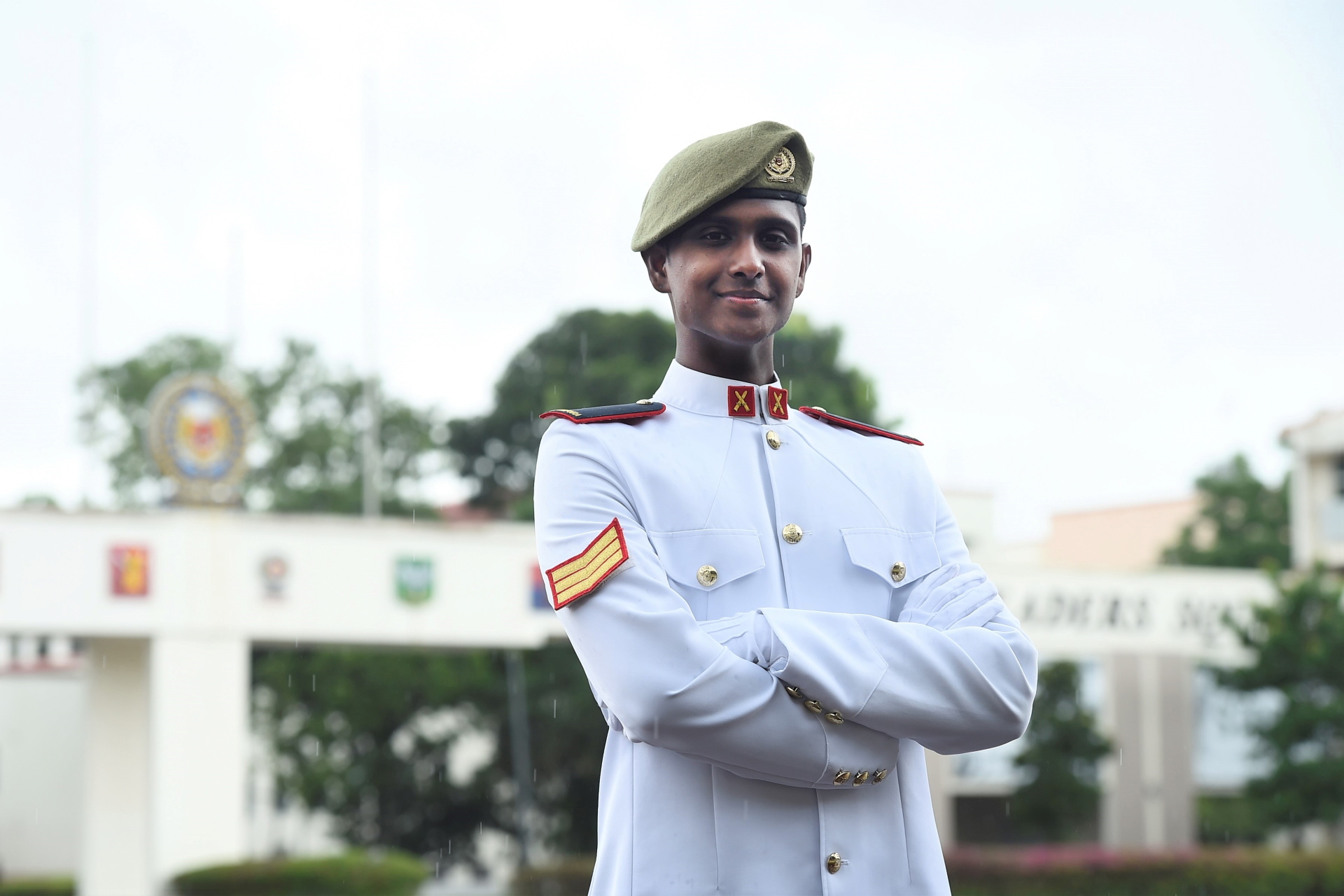 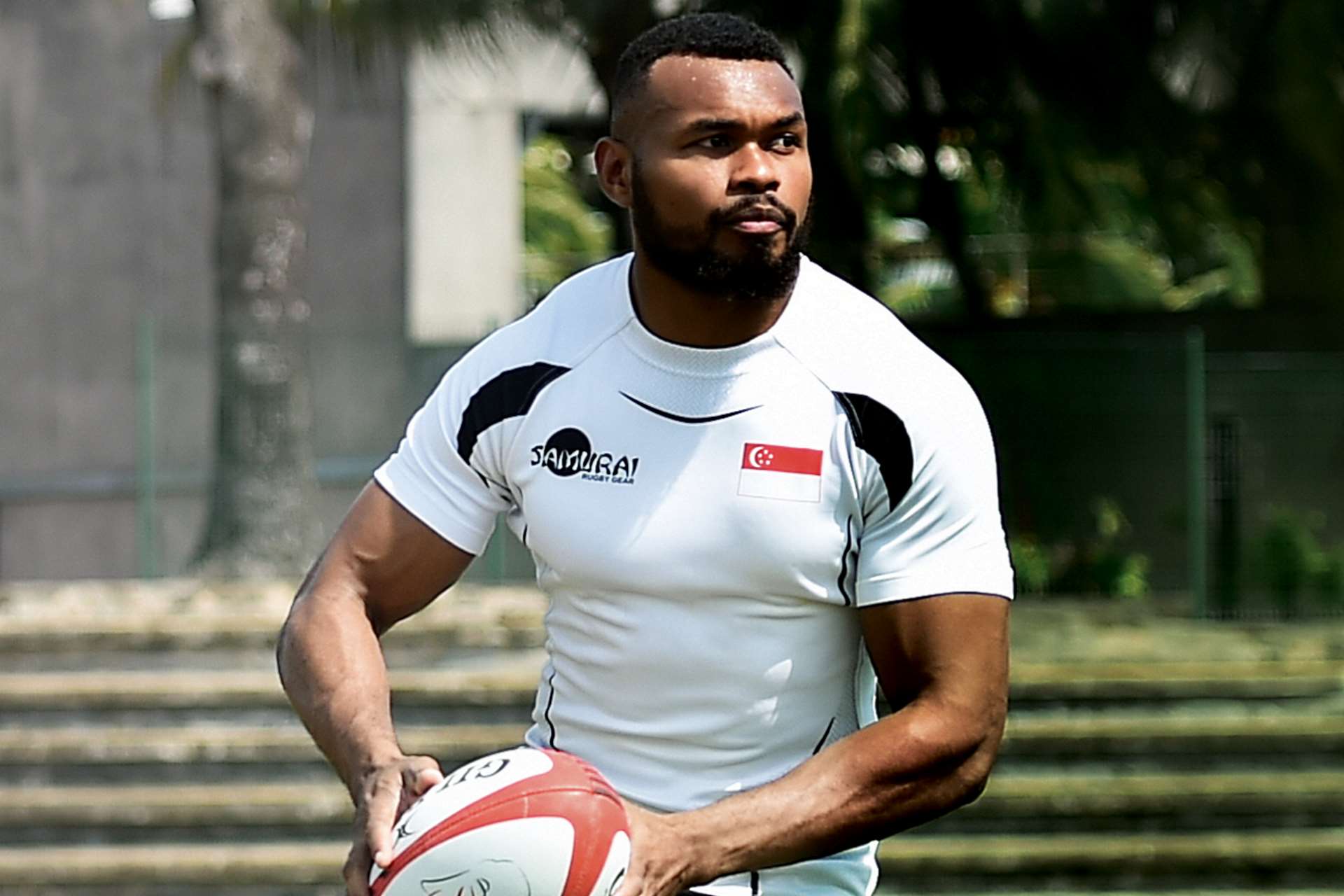 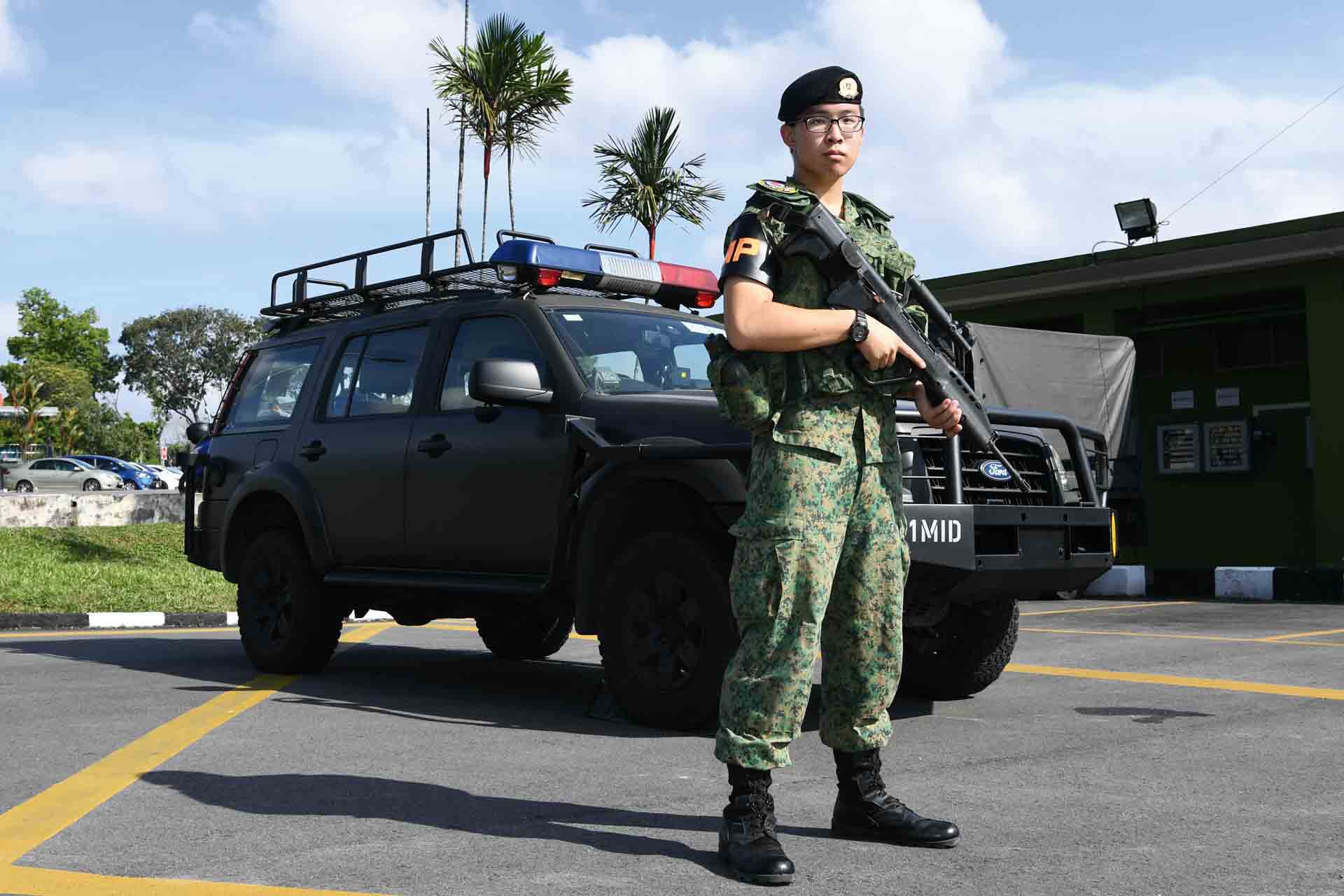 After spending most of his life abroad, 3rd Sergeant (3SG) Arthur Chia returns to Singapore to serve his nation.