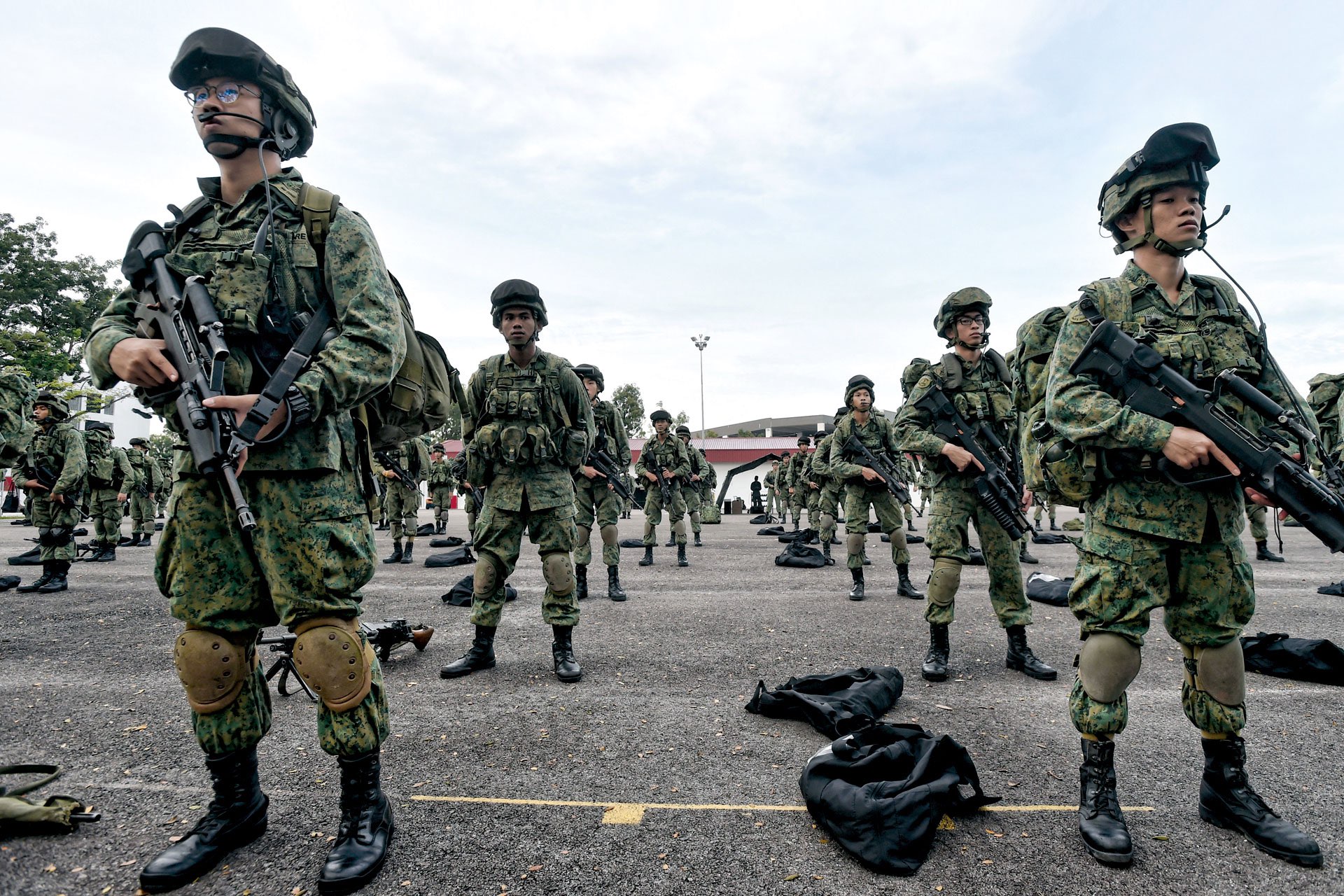 About 8,000 soldiers answered the call of duty over two days from 26 to 27 Jan, when the Army conducted a massive mobilisation and equipping exercise. Here's the lowdown.

It is 8am on a Friday morning. All is quiet until a siren sounds. Soldiers hurriedly gather their weapons and equipment, and run to assemble in neat rows at Selarang Camp.

The scenario: the authorities have reliable information that attacks are imminent. The location and nature of the attacks are not yet clear, but the country's security forces are already on high alert.

On the morning of 26 Jan, soldiers from 3rd Battalion, Singapore Infantry Regiment (3 SIR) are the first to be activated and proceed to carry out weapon drills and equipment checks.

In a few short hours, the battalion is ready to move out.

Unbeknownst to them at the time, it would be a part of a massive mobilisation and equipping exercise spanning two days. On the same day, an elite infantry unit — 3rd Battalion, Singapore Guards — has also been activated at Bedok Camp, and guardsmen are running through their drills. These include baton techniques and restraint manoeuvres.

With a sizeable force ready, the stage is set.

Within minutes, the entire battalion has poured onto the parade square and they begin preparations for operations.

And so begins the largest mobilisation and equipping exercise that Singapore has seen since 1985.

0330hrs: 3 SIR soldiers stopping a panicked crowd trying to leave the National Stadium after gunmen open fire in the packed stadium. These soldiers were activated earlier in the day and were assigned to homeland operations after a simulated attack at the Singapore Sports Hub.

Before the night is over, 3 SIR receives its mission: to support Home Team agencies in containing and neutralising attacks by multiple gunmen at the Singapore Sports Hub.

The soldiers move quickly, establishing personnel and vehicle checkpoints around the Sports Hub. All persons and vehicles going into and out of the premises are subjected to stringent checks.

In the early hours, drama erupts as a panicked crowd tries to flee from the attack. Sports Hub staff and SAF soldiers hold them back, screening each one thoroughly. One of the civilians does not seem to be at ease, and initial security scans indicate that he may have a weapon hidden on his body.

SAF soldiers quickly step in after he refuses to comply with instructions. He is wrestled to the ground and searched; a bladed weapon is found in his pocket and he is taken in by the Police.

Meanwhile, at one of the many vehicle checkpoints ringing the Singapore Sports Hub, a car that had been asked to turn away suddenly attempts to barge through the barriers.

The driver is shot dead and the vehicle grinds to a halt after being ensnared by tyre spikes. The passenger, who is armed, is quickly apprehended and the car thoroughly searched for potential threats.

Elsewhere within the Sports Hub, there is a brief but intense firefight as another group of gunmen openly challenge the soldiers while making a last-ditch attempt to kill more people.

A crisis has been averted, but the possibility of another attack looms.

Outside the Sports Hub, soldiers set up vehicle access control points to screen all traffic going in and out of the affected area.

For the soldiers taking part in the exercise, the experience have given them newfound confidence. "This (training in an area like the Sports Hub) is something that we don't get to do on a daily basis… I'm glad that we finished this exercise strong," said Corporal Gabriel Chua, a 19-year-old Infantry trooper from 3 SIR

"It's been quite a tiring day but also a rewarding one. I feel that we have (more) confidence in our abilities now."

"The scenarios were realistic and it felt good that our battalion was able to respond well. It shows how ready we are." On 27 Jan, the Army further mobilises various Operationally Ready National Service (NS) units. The call goes out to thousands of citizen-soldiers on the sunny Saturday morning.

This time, it is a silent mobilisation and the call is not broadcast on mass-media channels.

Within an hour of the call being sent out, Operationally Ready National Servicemen (NSmen) start streaming into the Selarang Mobilisation & Equipping Centre (MEC) for equipping and preparatory training.

27 Jan, 1200hrs: NSmen arriving at the Selarang MEC scan their identity cards at the Self-Service Kiosks, which issue printouts of the weapon and equipment they need to draw.

One of the activated NSmen, Lieutenant (LTA) (NS) Muhammad Hafiy Bin Abdul Karim, was catching up on sleep after a long work-week when he received the call on his mobile phone.

"I quickly got up, readied my stuff and headed out," said the 28-year-old, who is a Platoon Commander in 790 SIR. He works as a business analyst at Standard Chartered, a banking and financial services firm.

When asked how he felt about being called up, LTA (NS) Hafiy said: "While I could have done other things with my weekend, I also know the importance of answering the call — the country's security is at stake."

"Moreover, the mobilisation and equipping process is pretty fast and hassle-free," he added. 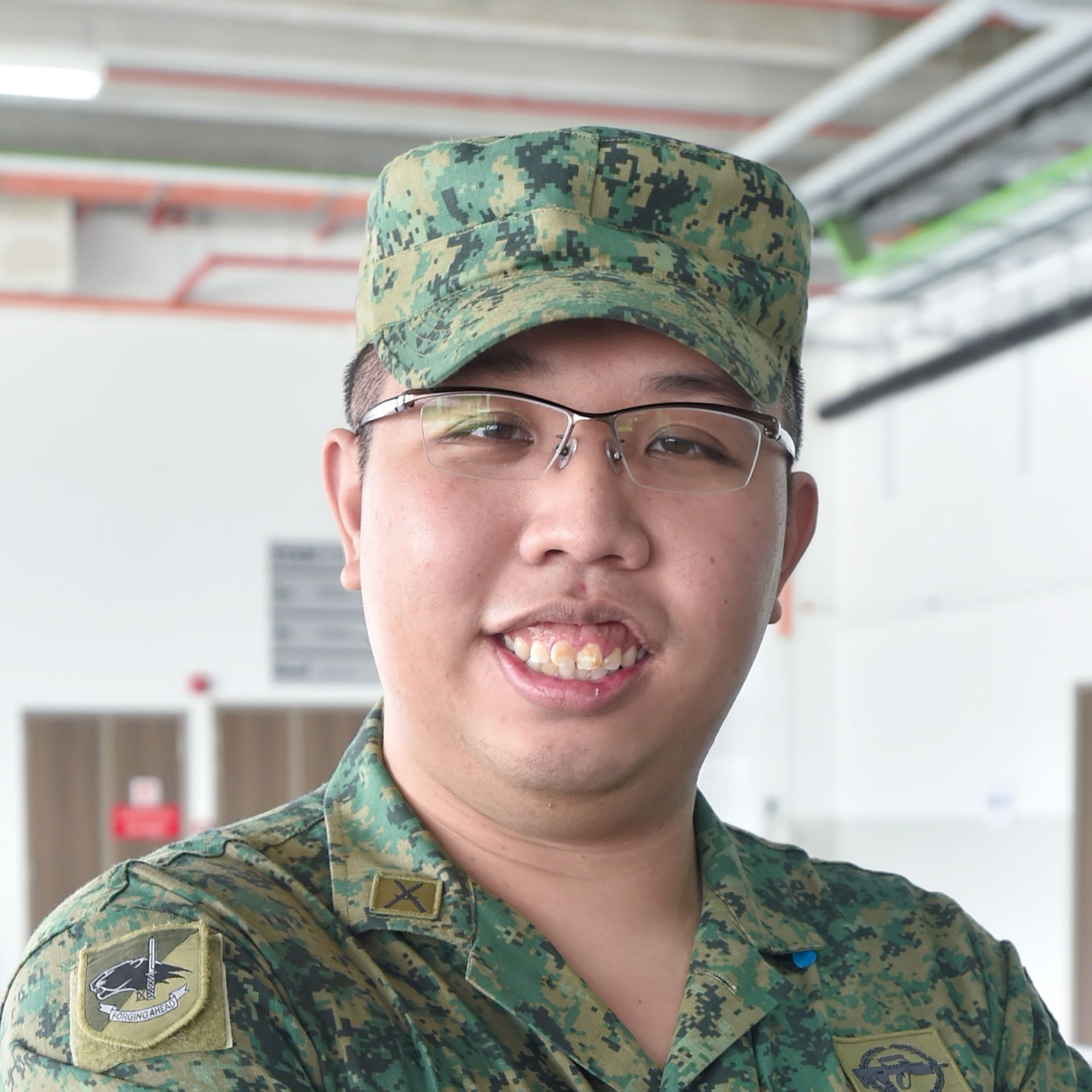 "The mobilisation process went smoothly; at no point did I feel that I didn't know what to do or where to go. It was well-planned and executed."

Unlike the mobilisation and equipping process of yesteryear that required NSmen to travel to different locations to draw their equipment, today's process is a half-day affair at a single location.

Much of that was made possible by the design of the Selarang MEC. The latest of its kind, the MEC houses everything that an NS unit needs to be ready for operations.

There are self-service kiosks that make the in-processing a breeze for NSmen. The conceptualisation, design and development of the MEC was managed by the Defence Science and Technology Agency.

Other innovations in the sprawling complex include Controlled Humidity Environment (CHE) storage facilities that keep vehicles in operational condition, ready to move out at any time.

For example, the Terrex Infantry Carrier Vehicles (ICVs) are stored in the CHE storage facility with complex electronics and other sensitive components on board and ready for quick deployment.

Previously, these components had to be removed before the Terrex ICVs were put in storage, to prevent deterioration.

Dr Ng (in grey shirt) being briefed on the CHE storage facility within the Selarang MEC. This cavernous space is designed to maintain a constant humidity level, which allows for better upkeep of operational vehicles, thus ensuring that they are ready to move out at any time.

He added: "(The mobilisation) this year included the anti-terrorism exercise that we conducted together with the Singapore Police Force… I think Singaporeans have the confidence that the Army is ready and NSmen are committed and ready...to fulfil their missions."

During his visit, Dr Ng was briefed on the Army's mobilisation system and observed NSmen going through in-processing and equipping of personal weapons and equipment, before undergoing refresher training on soldiering fundamentals.