Singapore's security agencies work together to respond swiftly to terror attacks, should the worst happen here.

A pair of speedboats carrying illegal arms is racing towards Singapore's eastern shore. The waters look clear and they are just minutes away from landing on shore.

The smugglers are unaware that the island nation's security agencies have already picked up on their movements. With the Singapore Maritime Crisis Centre (SMCC) at the helm, agencies such as the Republic of Singapore Navy (RSN) and the Singapore Police Force (SPF) track the speedboats' location with their respective ships.

On shore, accomplices lie in wait for the speedboats to arrive. They are detected by the national security agencies' coastal surveillance systems and fast-response units are sent to arrest the perpetrators.

This was just one of the scenarios played out at this year's Exercise Highcrest, a major counter-terror exercise that showed how tightly the nation's security agencies were able to coordinate their reponses to thwart possible attacks.

Shootings, stabbings and more recently, vehicle attacks have been on the rise. Every other week, there is news of some terror attack from somewhere around the world. While Singapore cannot immunise itself against such attacks, it can beef up its responses to them.

This is why the Singapore Armed Forces (SAF) and other national security agencies have been moving towards greater integration when it comes to homeland security.

For example, at the SMCC located at Changi Naval Base, a multi-agency group scrutinises the maritime situation 24/7 to look out for anomalies. Its ultimate aim is to detect and deter maritime security threats as early as possible.

At the end of his visit to another counter-terrorism drill -- Exercise Northstar -- on 17 Oct, Prime Minister Lee Hsien Loong said: "Exercises like these enable us to come together to practise what the agencies need to do, and also give us a good sense of where weaknesses in our preparations may be, and what we have to do (to improve)."

Held in the wee hours of the morning at Changi Airport, the exercise tested multi-agency responses to a shooting rampage by multiple gunmen and a suicide bomb attack at the busy air hub.

Added Mr Lee: "The airport is a high-profile target; it is completely plausible that something like this could happen in Singapore one day. If it does happen, we must be sure that our responders are ready for it." The two exercises were held over the same period in October to test the collective response of Singapore's security agencies to an attack from the land and sea. This is the first time that Exercise Highcrest is working together with the land-based Exercise Northstar to see how attacks on land can impact operations at sea, and vice versa.

Here's what happened at the two exercises:

Held from 19 to 26 Oct, the exercise involved about 300 personnel from 14 agencies that included the RSN, SPF and MPA working together to stop terrorist speedboats carrying illegal arms from reaching Singapore's shores.

2) Surveillance and detection of suspicious activity

Through its network of coastal surveillance sensors, the Maritime Security Task Force and a Littoral Mission Vessel (LMV) patrolling the Singapore Strait detect two suspicious speedboats headed towards the shore. The detection is further corroborated by a member of public who alerts authorities through the SGSecure app.

With the LMV in close support, the PCG despatches its PK-class High Speed Interceptors and PT-class Patrol Interdiction Boat to swiftly intercept the boats before they reach Singapore's shores.

4) Preventing infiltration from sea to land

On land, the PCG's coastal cameras have detected the accomplices lying in wait at Changi Coast. Having narrowed down the location where the boats may land, the Singapore Police Force calls in its Coastal Hardening Strike Force (CHSF) to respond first, while coordinating with additional units to apprehend the accomplices.

Making sense of it all

CFC Wesley is one of the NSF Sense-Making Assistants who work in the SMCC, trawling through massive amounts of data on a daily basis so that potential threats are detected early.

What stood out during the exercises was how quickly the authorities were able to detect intrusions and potential attackers. That is down to the coordinating centre, the SMCC, which focuses on maritime threats.

With about 1,000 vessels transiting Singapore waters daily, the NMSG literally has to make sense of a sea of data, sifting out the significant from the noise.

It builds profiles of vessels based on attributes such as route, owners, crew and cargo with data shared by government agencies and shipping operators. It also looks at the entities linked to the vessels or the vessels themselves to see if there is evidence of foul play such as shady financial transactions or suspicious cyber trails.

That process starts with the Sense-Making Assistants (SMAs) who look at data from various streams and make sense of all the data holistically. Typically Full-Time National Servicemen (NSFs), they work in rotational shifts to provide round-the-clock coverage.

Said Corporal First Class (CFC) Wesley Lincoln: "The job requires some level of instinct and an analytical mind; we need to discern what is innocuous and what might be an actual threat." He has been in the SMA job for about a year and a half.

As a non combat-fit soldier, CFC Wesley said that he was glad to be able to contribute to Singapore's defence in this way. "I also get to work on certain skills here -- my ability to analyse large amounts of data while keeping the larger picture in mind."

Trawling through the seemingly endless stream of data, they look for tell-tale signs of trouble such as passenger lists that do not tally with what was filed with the authorities, and social media postings that make threats directed at Singapore.

Once a potential threat is established to be credible, SMCC officers from other agencies may be roped in to examine it further. If further action is required, the NMOG coordinates ground operations to round up the suspects.

Besides being the main driver of collaborations between the Singapore's Maritime Security (MARSEC) agencies, the NMOG also leads efforts to review the national MARSEC response mechanisms and build tightly coordinated operational responses to maritime threats.

This year's Exercise Northstar was held over two phases. The first was on 17 Oct at Changi Airport and tested responses to armed gunmen rampaging through the busy international air hub. The second phase, held on 28 Oct, tested responses to car-bombings in an urban setting.

The exercise begins -- gunmen emerge from the commuter trains with automatic weapons and open fire on passengers, leaving some dead and many injured. Units from the SPF react quickly, killing some of the gunmen. Other SPF units quickly pursue the remaining gunmen. "If it (a terrorist attack) does happen, we must be sure that our responders are ready for it. We (have to) react in such a way as to minimise casualties and deal with the threat as quickly as possible. It needs a lot of cooperation, a lot of practice, a lot of teamwork, and many different agencies are involved."

Dealing with the aftermath

What is there left to do after an attack? One of the most pressing tasks would be the accurate identification of the perpetrators and victims who were killed for the purposes of further investigations and closure for immediate family members.

One of the ways that identification can be done is through the matching of dental records, carried out by a forensic odontologist. This area of medicine is so niche that there are only two doctors in Singapore who can do the work. Both of them are SAF doctors.

One of them, Major (MAJ) (Dr) Gabriel Chong, participated in the second phase of Exercise Northstar where he demonstrated how his expertise could help in the aftermath of a tragedy.

"DVI (or disaster victim identification) operations are carried out to identify unknown human remains in order to send them back to their loved ones, such that the next-of-kin can have some closure and hopefully return to a normal life."

When asked how forensic odontology can aid identification, MAJ (Dr) Chong said: "No two individuals, even identical twins, will have the same dental records, and we can use this to positively identify bodies.

"In fact, about 80 percent of non-Thai victims of the 2005 Phuket Tsunami…were identified by their dental records (either alone or in conjunction with fingerprints and DNA mapping)." 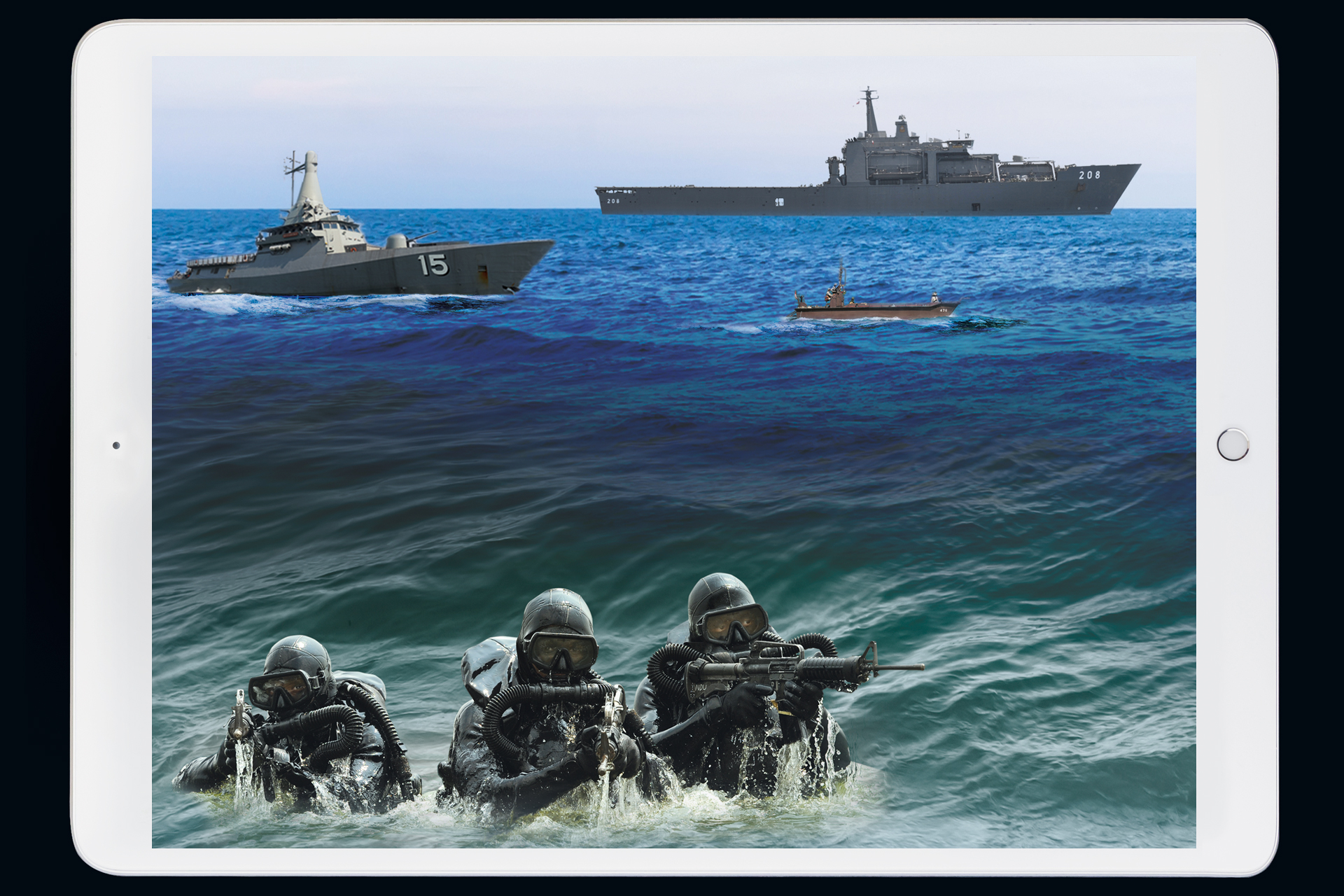 Feature
Protectors of the seas
OPS & TRAINING
01-May-18

A new So Drama! Entertainment Web series dives into the diverse roles that the Navy's sailors play in defending Singapore's seas. About 8,000 soldiers answered the call of duty over two days from 26 to 27 Jan, when the Army conducted a massive mobilisation and equipping exercise. Here's the lowdown. Exercise Forging Sabre (XFS) 2017 takes integration between the Republic of Singapore Air Force (RSAF) and the Army to greater heights. Feature
GIVE IT YOUR BEST SHOT
COMMUNITY
01-Jan-18

Shooters from the 10 ASEAN nations strengthened defence ties and engaged in a test of marksmanship at the ASEAN Armies Rifle Meet (AARM) 2017. In its 27th year, Exercise Wallaby 2017 continues to enhance interoperability among the Army, Navy and Air Force through training sessions such as air-land integrated live firing. This cavernous hangar packs a wealth of green features, providing a cool environment for technicians who service the Republic of Singapore Air Force's fleet of utility aircraft. As the NS50 celebrations draw to a close, PIONEER gives you a round-up of the year-long campaign which celebrates past and present national servicemen.