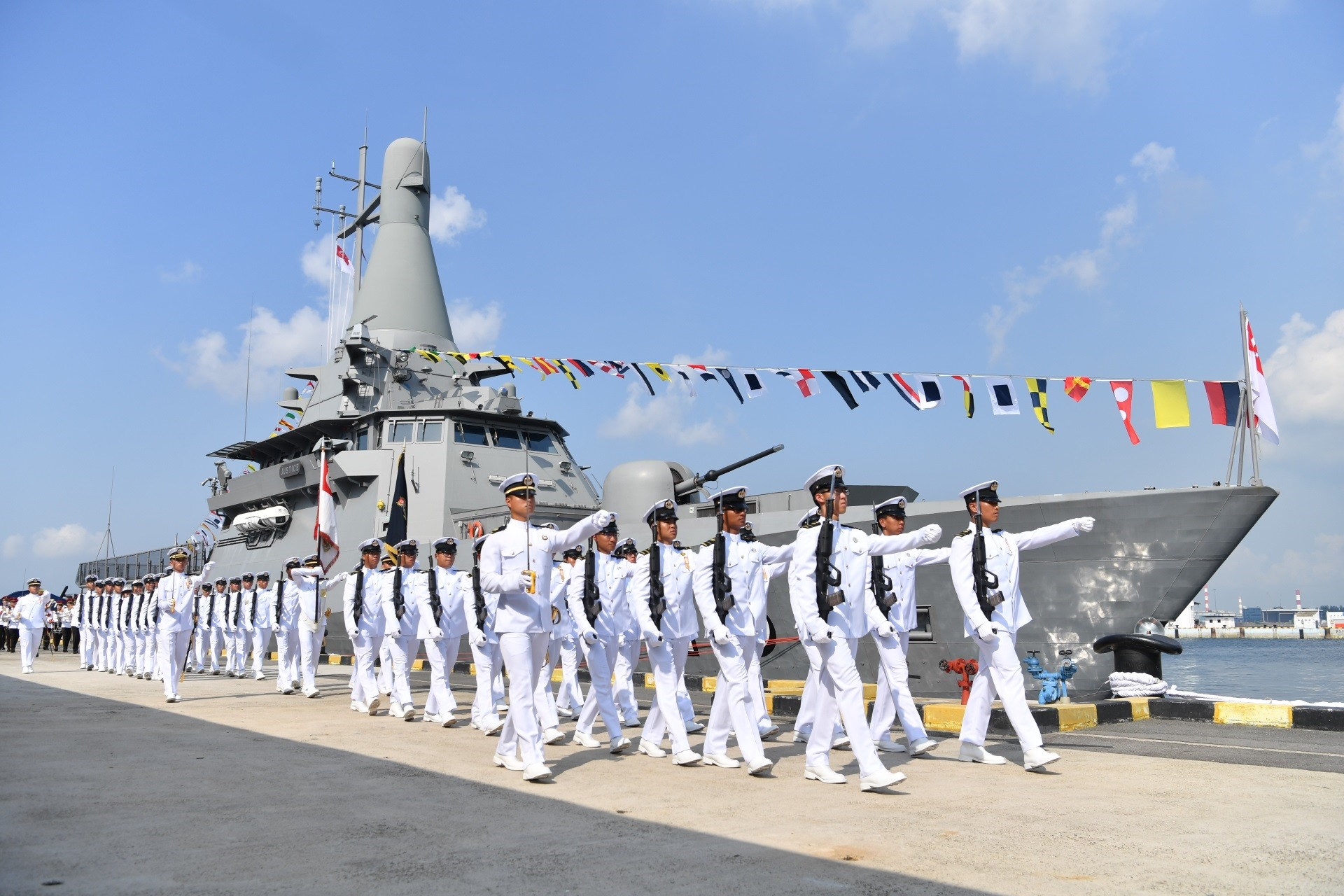 7 facts about our Singapore Navy!

Frigate RSS Tenacious successfully conducted the firing of two Harpoon missiles to hit a target simultaneously during the 2018 Rim of the Pacific (RIMPAC) Exercise, the world's largest multilateral maritime exercise.

1) The RSN has sailed all over the world

Conducting counter-piracy operations in the Gulf of Aden. Training alongside multinational navies in the world's largest maritime exercise off the coast of Hawaii, United States (US). Conducting combined missile firings with another navy in the Andaman Sea.

The RSN has deployed its ships across the globe for exercises and operations, honing its capabilities while forging friendships and strengthening interoperability with other countries.

Family members bidding farewell to their loved ones on board RSS Endurance in June 2000 as it embarks on its four-month voyage around the globe, from the United States to Mexico, Canada, the United Kingdom, France, Egypt and Saudi Arabia.

In 2000, RSS Endurance made local history by becoming the first RSN ship to circumnavigate the globe. The four-month deployment covered 25,000 nautical miles (that's 46,300 km!) and took the Landing Ship Tank (LST) to nine ports and through the Suez and Panama canals.

As part of the voyage, the crew conducted exercises and drills with some of the host countries. Among them was the French Navy, en route to Toulon, France. In that exercise, French helicopters executed a total of 34 landings on the flight deck of RSS Endurance while crossing the English Channel.

RSS Endurance (foreground), RSS Endeavour (left) and RSS Persistence (right) off the coast of Meulaboh in Sumatra in January 2005. The LSTs played a crucial role in transporting and providing essential medical supplies, support equipment and vehicles.

For instance, the RSN rendered assistance to Indonesia in the wake of the 2004 Boxing Day tsunami. In the largest SAF overseas operation conducted so far, more than 1,500 SAF personnel and three LSTs were deployed as part of the HADR efforts.

More recently, the RSN also sent its ships to assist in multinational search operations for the missing Malaysian Airlines flight MH370 in the Gulf of Thailand in 2014, and AirAsia flight QZ8501 which crashed into the Java Sea in the same year.

In 1971, the RSN "purchased" its first County-class LST from the US Navy for a token sum of US$1 as part of a lease with the US Navy before it was bought over in 1975.

The County-class LSTs supported the RSN by transporting personnel and equipment, and were even deployed to Timor-Leste in 1999 as part of United Nations peacekeeping efforts.

After more than 20 years of service, the County-class LSTs were replaced by the Endurance-class in 2000. Talk about stretching every dollar!

Out at sea, ships use naval signal flags to communicate with other ships when necessary.

4) Ships can "talk" to each other using visual signals

Sailors are a highly resourceful bunch - before radios were invented, they communicated with other ships using visual signals such as flags and pennants that were hoisted onto the ship's halyard (a line used to raise or lower a sail or flag).

This practice continues even today when maintaining radio silence or when voice communication deteriorates. Using the International Code of Signals, ships can still communicate simple messages despite language differences!

5) Sing with our sailors: The RSN's official song can trace its roots to 1974

Did you know the RSN has an official anthem called... the Navy Song (no points for guessing)? This was originally called the Midshipman (the term for naval officers in training) Song and was written in 1974 by two midshipmen, Melvin Huang and Lionel Liew.

The song was refined, and a third stanza was added by Senior Minister Teo Chee Hean, when he was the Chief of Staff (Naval Staff) and Director, Joint Operations and Planning Directorate in 1989. It was eventually adopted by the RSN as the Navy Song.

Today, the song is sung at all major Navy events and is etched into the psyche of the men and women of the RSN. As the heart-stirring lyrics go: "Onwards and upwards we've moved on and on..."

6) Sailors are proud of their strong "Navy Family" spirit.

Have you ever wondered why the Singapore Navy is endearingly and commonly referred to as a family? Traditionally, the RSN has been smaller in size compared to the other Services, which may explain why the Navy often seems to be an even more close-knit unit.

Given that sailors have to work, eat and sleep within a confined space onboard ship, it has become second nature to look out for one another over long deployments.

Dog watch — The crew of RSS Intrepid hard at work in the evening as they keep watch over Singapore’s waters.

7) Do you understand "sailor speak"?

Possessing perhaps the most unique lingo out of all three Services, the RSN has its own "sailor speak" that substitutes commonly used words or phrases with foreign-sounding ones that landlubbers may not be able to decipher. Here are some of them!

Typically used by senior officers to praise their subordinates for a commendable achievement, the phrase has its roots in the early US Allied Naval Signal Book.

Did you also know that "bravo zulu" was originally "baker zebra"? The phrase was only renamed to "bravo zulu" when the US Navy adopted the standardised "Alpha, Bravo, Charlie…" naming convention of the ICAO alphabet in 1956.

This period is split into two, with the "first" dog watch from 4pm to 6pm and the "second" dog watch from 6pm to 8pm. The term was originally used to refer to the night watch on ships - the time when all but the dogs were asleep. The name is also said to be derived from Sirius, the "dog star", on the claim that Sirius was the first star that could be seen at night. The first dog watch is usually when RSN personnel do physical training or play sports if there are no operations at the time.

This is because back in the day, toilets were located in the head (or bow) of the ship!

"Starboard" evolved from "steorbord", meaning "the side on which a vessel is steered". Before the days of GPS, sailors did astro-navigation on the right side of the ship, hence why it is known as the steering side.

The old term "larboard" or "loading side" refers to the side of the ship - typically the left - where loading and unloading was done. It eventually changed to "port" as people found "larboard" too easily confused with "starboard".

BONUS: Did you know that ships (and aircraft) display green and red navigation lights? The starboard light is green and the port light is red!